Not A Single Decaf Bean Was Added

In 2013, we released the second “Odd Beers for Odd Years” versions of our Stone Old Guardian Barley Wine and Stone Imperial Russian Stout and, in my opinion, these are the best we’ve done so far. 2013 Stone Old Guardian OAK-SMOKED Barley Wine was great fresh and is aging beautifully, and 2013 Stone ESPRESSO Imperial Russian Stout became one of our most popular beers ever.

Since then, we’ve brewed a lot of beers with coffee, and have continually sought out another opportunity to brew another great beer using Ryan Bros. Coffee Espresso Gold beans again. In fact, we even suggested brewing the Espresso IRS again in 2015, but it was decided that since we had done it before, it wasn’t “odd” enough to do in that series again.

So when we decided that we'd release a series of three high-intensity seasonal beers in 2016, one of the first contenders was an imperial stout or porter with espresso.

In putting this beer recipe together, I wanted to make sure the beer’s taste was significantly different than our imperial Russian stout, which Steve put together back in 2000 and was originally inspired by the classic Courage Russian Imperial Stout from England. Instead, we went decidedly American with this stout recipe, using all American malts and hops. The base imperial stout was inspired by the stouts I enjoyed and brewed back when I was just starting out in the late 1980s. Back then, brewpubs were typically brewing three, maybe four beers; there was always a pale or golden ale, an amber ale, and a dark beer, a porter or a stout. I loved the rich brash stouts from the San Francisco Bay Area, with their intense coffee and cocoa flavors, sharp hop flavor and bitterness and lingering dryness. In the late 1980s, most brewers didn’t have the wide range of malts and hops available today, and so when I put this beer together, I went back to those ingredients that were available to most of us in the 1980s: American hops like Chinook and Cascade, and dark malts made by Briess in Wisconsin.

When I was at San Andreas Brewing Company in Hollister, California, our standard dark beer was Earthquake Porter, a deep, robust porter. After the October 1989 Loma Prieta earthquake, which did a lot of damage to our town, we brewed a bigger dark ale, a stout, and decided to name it Survivor Stout. We released it in the spring of the following year, and I brewed it to be massive (for the time), close to 8% ABV, using well over 10% dark malts: a combination of roasted barley, black patent malt, and chocolate malt. We used Chinook, Yakima Goldings and Cluster hops. I consider this one of my favorite beers, one that was intensely popular at the pub. We released it around St. Patrick’s Day every year and in 1997 it won a medal at the Great American Beer Festival. 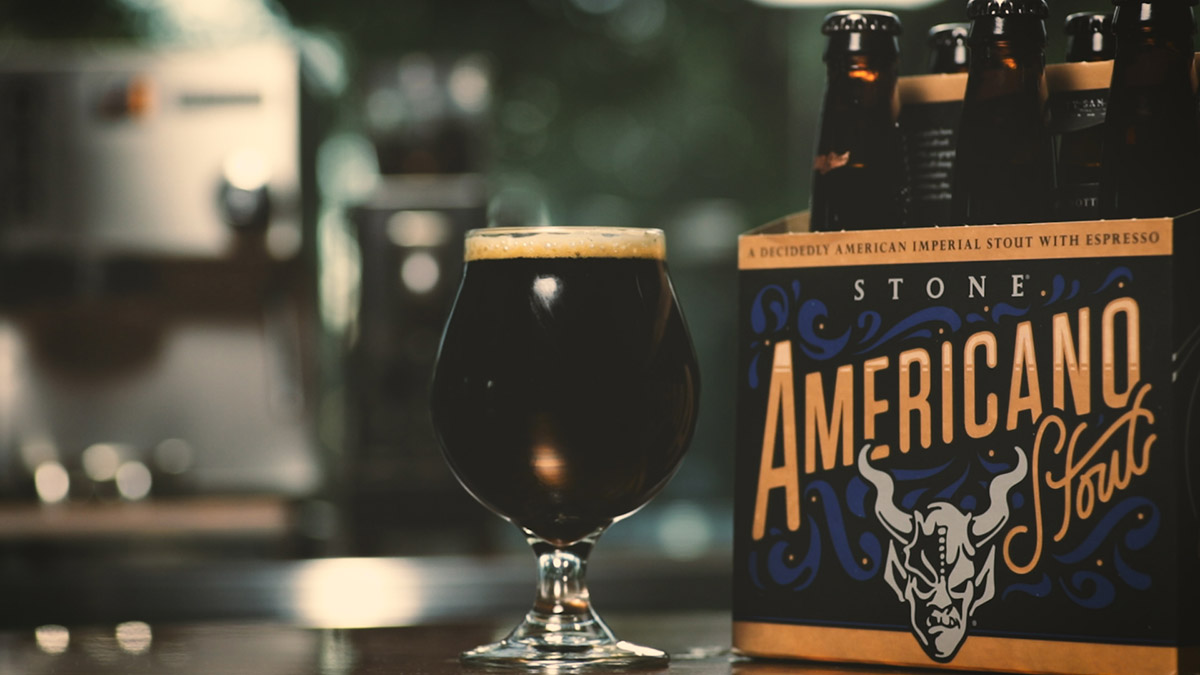 Using that beer as an inspiration, we have brewed Stone Americano Stout. The recipe includes pale malt, two types of American crystal malt, black patent malt and roasted barley. It is hopped to 65 IBUs with Columbus, Chinook, Cascade and Amarillo hops. Whole espresso-roast coffee beans are added to the mash, and cold-steeped espresso is added to the beer after fermentation. The result is a wonderful blend of roast flavors from the coffee and the malts, followed by a bracing, resiny hop bitterness. We are very happy with the result!