As you may recall, we celebrated our true 16th anniversary just a few weeks ago. (On July 26th, to be exact.) And of course we've been kind enough to politely remind you about the upcoming Stone 16th Anniversary Celebration & Invitational Beer Festival. (On August 17-18, to be exact.) But what kind of anniversary celebration would it be without a new libation, amirite?

In keeping with our yearly tradition of making an excellent beer to ring in our happy day of birth, our stellar brewing crew is proud to present the deliciously hoppy Stone 16th Anniversary IPA. It's actually a double IPA (don't pretend to be surprised) spiked with a touch of lemon verbena and lemon oil, which Brewmaster Mitch Steele tells us "combines wonderfully with the peach and tropical mango flavors from the Amarillo hops, and with the apple and berry notes from the Calypso hops." 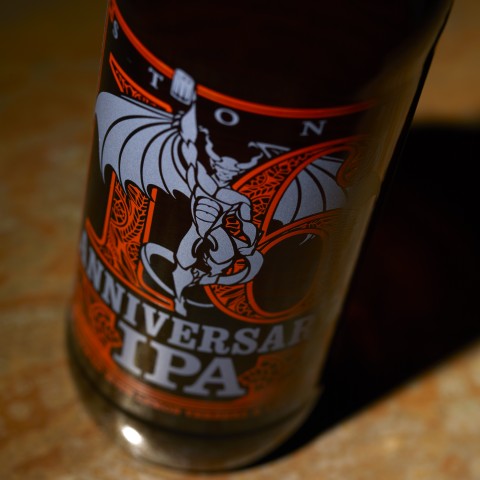 Stone 16th Anniversary IPA... it's like a lemon party for your mouth. (photo by StudioSchulz.com)

We also threw in a wee bit of rye malt... not enough to classify it as a Rye IPA, mind you, but definitely enough to lend a nice hint of its telltale peppery flavor. Needless to say, this is one helluva beer to enjoy alongside a super tasty meal, so "Dr." Bill was kind enough to grace us with some food pairing suggestions below. Kegs and 22oz bottles began rolling out today, and there was much rejoicing. (Yaaay.) Fair warning: as with all of our anniversary beers, this is a one-time brew only, so don't sit around twiddling your thumbs if you're hoping to sample a delicious swig. Or two. Or three. (And yes, it is true that a few Stone Anniversary Ales have come back as full time beers, but please know that it's not a usual occurrence.) That said, here's the breakdown of everything you wanted to know about this beer, but were(n't) afraid to ask...

Appearance: Beautiful light amber with a thick creamy tan head.
Aroma: An incredible blend of fruits: citrus, lemon, and peaches, with hints of mint and dry-roasted nutty malt flavors.
Taste: A very clean maltiness, intense peach/mango Amarillo hops, hints of apples and berries, finishing in a burst of fresh lemon, hop bitterness, and herbal spiciness.
Palate: Medium body with smooth and complex malt flavors and the very slightest hint of alcohol heat, with a refreshingly bitter and citrusy finish.
Overall: From the first time I smelled a broken leaf from a lemon verbena bush at Stone Farms, I thought its intense lemon character would be a great addition to an IPA. It truly is “more lemon than lemon.” The lemon flavors combine wonderfully with the peach and tropical mango flavors from the Amarillo, and the apple and berry notes from the Calypso hops. The result is an intense and bitter take on a double IPA.

Are growlers being filled as well?