We take a lot of things seriously here at Stone. (Not ourselves.) Freshness is definitely one of them. You see, as beer ages, the first thing that starts to fade is the flavor and aroma contributed by the hops. The olfactory glory that they impart is extremely volatile, and from the moment the beer finishes fermenting, the hop character starts to go bye bye, and unfortunately, there's just no bringing it back. Of course, there are things you can do to help prolong the hoppy goodness, like protecting your almighty beer from light and keeping it cool. (We store and ship all of our beer under refrigeration, btw.) Under regular conditions, we've tasted our beers at different intervals and found that they still taste just as great as we originally intended as much as 90 days after bottling. This finding, coupled with our unrelenting commitment to freshness, enticed us to begin laser-etching enjoy by dates on each bottle. With that process, we also instituted new measures that allow our wonderful fans, like yourself, to report expired beer. We love our beer, and we want to make sure it's fresh! But then, we thought, "Hey! Why not brew a big double IPA that is meant to be consumed even fresher? Why not put a date right up on the front of the bottle, and gave it a MUCH shorter shelf life?" It wouldn't be easy. It wouldn't be able to go everywhere. But it would be damn delicious, and it would be a mighty interesting undertaking. Sure, we discussed it in a few more meetings, but by this time, we'd already talked ourselves into it: the concept for Stone Enjoy By IPA was born. 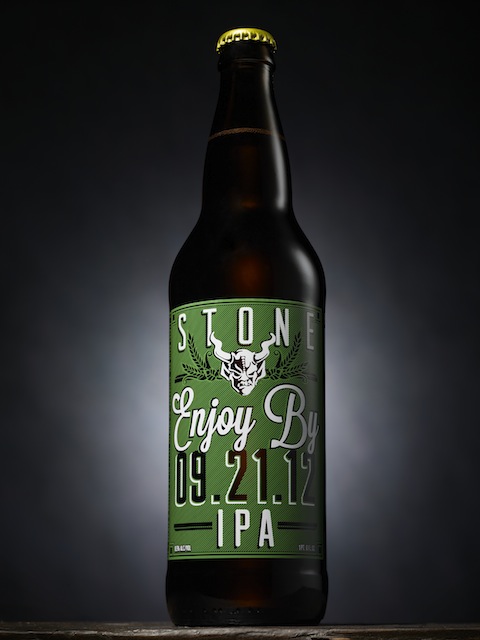 Stone Enjoy By IPA -- so fresh and so clean clean! (Photo by StudioSchulz.com)

The concept is this: Stone Enjoy By IPA is meant NOT to last. That big bold date you see emblazoned on each glorious glass vessel? Yeah, it's a mere 35 days after the beer is bottled, giving hop fiends exactly five weeks to find and enjoy this beer. (We'll have kegs, too.) But we really don't want you to have to look too hard, which is why we're listing each account it's going to on a handy dandy map. That said, Stone Enjoy By IPA isn't going everywhere. Far from it! At least at first... Given the shipping and distribution logistics involved with launching a beer that has such a short lifetime, we've worked with our distributors to find out who would be as excited as we are to give this freshness experiment a try. Our first batch, which was bottled and kegged on Friday, August 17, 2012, has been dubbed Stone Enjoy By 09.21.12 IPA, and it's heading to those who raised their hands the highest. Besides heading out to SoCal thanks to our own Stone Distributing trucks, our friends at Hunterdon Distributing in New Jersey and Windy City Distribution in Chicago practically tinkled in their pants while screaming, "Oooh! Oooh! Pick me! Pick me!" when given the chance to kick off this momentous brew. Live in those areas? Welllllll, lucky you. You should see it popping up in your hood starting this week. We've got all that information lined up for you, including where you can find it at http://www.stonebrewing.com/enjoyby. Not in one of those spots? No worries. We plan on making more of this beer over time, using the same fresh recipe, with the same 35-day shelf life. All that will change will be what cities it hits and what enjoy by date you see on the front of that there purty bottle. Rest assured we'll keep you posted right here on ye olde Stone Blog, as well as on our Facebook page and le @StoneBrewingCo Twitter account. In the meantime, here's the scoop on how this delightful beverage stacks up to wow your senses. Stone Enjoy By IPA Stats: 9.4% abv, 88 IBUs Hops bill: Calypso during the mash; Super Galena hop extract for bittering; Simcoe, Delta, Target, and Amarillo for flavor; Motueka, Citra, and Cascade for aroma; Nelson Sauvin and Galaxy for dry hopping

Tasting Notes, provided by Brewmaster Mitch Steele Appearance: Golden with a creamy white head of foam. Aroma: I don’t know when the word "dank" became an official part of brewing descriptive lexicon, but it certainly fits here. Intense dank hoppiness, resin, peaches, and hints of tropical fruit are all evident in the aroma. Taste: Smooth malt up front, quickly dissipating quickly into a massive onslaught of hops-the dankness and peach come through strongly. Palate: Smooth, hints of alcohol, and a perfect balance of bitterness and dryness on the back end. Overall: We took the opportunity with this beer to use several interesting techniques we’ve learned over our many years of brewing great Double IPAs.  The result is an intense dry beer with very little malt sweetness, but with plenty of malt flavor to provide a background to the enormous...or shall I say "ginormous"...hop character. Hopping, as might be expected, was over the top. First, the brew was mash hopped with Calypso, a beautiful fruity hop that we also used in our Stone 16th Anniversary IPA, after which we kettle hopped with a very small dose of Super Galena hop extract for bittering. Then, using a technique I’ve that some ine homebrew circles call “hop bursting,” we loaded up very heavily on the flavor hops at the end of the boil and in the whirlpool. Simcoe, Delta, Target and Amarillo were used in the late kettle hop. Motueka, Citra, and Cascade were used for the whirlpool hop. As you can clearly tell, this beer was super hoppy even before we dry-hopped it, but then we went for it...dry-hopping with 1lb per barrel EACH of New Zealand Nelson Sauvin and Australian Galaxy. Drink extra-super-dank-and-tasty Stone Enjoy By IPA well before its 35 day shelf life to maximize the pungent glory that this beautiful, intense hop profile provides.

Stone Enjoy By IPA - A Taste Tour with Mitch Steele

I purchased a Stone IPA mix pack at the local Target store. The date say Enjoy by April 12th 2016. Today's date is April 17th, so I'm going to return it for your website. So that I may enjoy the freshest beer in the future. Thank you for the information,
Regards
Ben Amaya