I'm guessing you really don't care to hear about anything IRS-related now that it's mid-April, but stick with me here. This is a good IRS. It's the über-dark, roasty-toasty, decadently rich Stone Imperial Russian Stout, and as of April 16th, it's back again. For the twelfth time. (And for a limited time.) Originally brewed up in 2000, this was Steve's tribute to the legendary, and decidedly dark Courage Russian Imperial Stout. Greg had a few bottles of the Courage '93 vintage that he'd brought back with him from trip to Europe in 1995. When he and Steve gave it a taste, it was a bit of a revelation, to say the least. 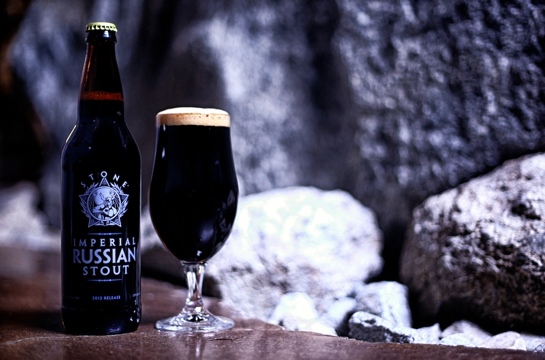 What was this delicious motor oil? Where has it been all of our lives? What on earth does it have to do with Russia? Why aren't more breweries repping this wonderfully decadent style? And when can we make one?

Turns out they weren't the only ones with questions. When we originally submitted the beer to the TTB—aka the Alcohol and Tobacco Tax and Trade Bureau, the federal agency to which all alcohol producers must submit their labels for approval—they weren't quite sure how to deal with it as there was no federally recognized beer style that it could be classified as. ("Wait, is it made in San Diego or in Russia? What is this?")

Chris Cochran, Stone's illustrious Community Relations Manager, was given the taxing duty (puns totally intended) of answering all their questions. Chris has carved out quite a place for himself here. Besides handling thousands of beer donation requests for charity events, planning the amazing Stone Anniversary Celebration & Invitational Beer Festival for the past 10 years, he's also the go-to guy for odd jobs such as this. (And countless others, like coming to the rescue when Greg's credit cards were frozen while traveling in Turkey.)

It took several years—yes, years—to get it all squared away, but Chris eventually got it done. Here's his story, as told in our awesome book, The Craft of Stone Brewing Co.: Liquid Lore, Epic Recipes, and Unabashed Arrogance. [/shameless plug]

“Yes, we did run into some trouble years ago with labeling our beer as an Imperial Russian Stout. I think it started in late 2002, when the TTB, in reviewing our label application, claimed that the word Russian was misleading. They thought it would confuse customers into thinking that the beer was brewed in Russia, despite all of the text being in English, and the label clearly stating, ‘Brewed and bottled by the Stone Brewing Co., San Diego, CA.’

We were given two options: either label it simply as Stone Imperial Stout or complicate matters by calling it Stone Imperial Russian-Style Stout. We explained that it wasn’t actually a Russian style of beer, rather that it was an English style that had been brewed for the Russian court, but that seemed to fall on deaf ears. However, Greg is a stickler about words and accuracy, especially in regard to anything having to do with our beer, so he wasn’t going to let this die.

It dragged on for more than three years. Each time the TTB pushed back, I’d send them more information: photocopies of pages from books by Michael Jackson and Stephen Beaumont, printouts of information from BeerAdvocate.com and RateBeer.com, and more. It became a shock-and-awe campaign, with some of my later packages containing hundreds of pages in support of our claim that using the word Russian was not misleading, but instead quite historically and stylistically accurate.

Sometimes we got by on a temporary permit, but the threat of having to change the name to just Stone Imperial Stout was very real, and in 2005 it actually was labeled just that, much to our chagrin. Luckily though, Arlan Arnsten, our Vice President of Sales, happened to randomly meet somebody from the TTB at an industry event in Washington, DC. When Arlan mentioned Stone, our infamous reputation preceded us.

They apparently hit it off pretty well. The TTB guy knew all about our little naming battle, and he gave Arlan his business card and said he might be able to help get the issue resolved. I emailed him in short order, and he pointed me to the exact section of the code I needed to bring up: Title 27, Section 7.24(g), which states that using geographic names, such as Munich, Vienna, or Dortmund, is verboten, except in situations where the style and name had become prevalent enough so as to render the geographic significance, well, insignificant. If we could only prove this, victory would be ours.

Interestingly enough, we found out that the TTB didn’t really know how to proceed with this any more than we did. The last time a change like this had come up was in the late 1930s, when the government ruled that India Pale Ale was a generally recognized style, as opposed to a mark of origin.

Unfortunately, though the style was being embraced by other brewers, most were brewpubs, so they typically weren’t bottling their beers, and therefore weren’t subject to labeling laws. While I wasn’t trying to throw anybody under the bus, I had to name some names if we were going to win this thing. I ratted out North Coast Old Rasputin (sorry guys, but hey, it all worked out, right?) and the few others that were making the style at the time.

Eventually, in April 2005, we got a letter informing us that the TTB would formally review our request. And finally, after years of back-and-forth, we finally got the response we’d been waiting for. In a letter dated June 29, 2005 (I still have it framed somewhere), Imperial Russian Stout was recognized as a distinctive style, regardless of place of origin. Not only could we use the name, all American brewers could.

It was a day I’ll never forget. Greg and Steve were ecstatic at having shaken up the status quo a bit. I was too, but more than anything, I was just glad to finally be done with it. I went home and popped open the oldest bottle of Stone Imperial Russian Stout I could find. I poured myself a glass out on my deck, sat with a copy of that approval letter, and watched the sunset. Victory was ours at last, with a little bit of righteousness mixed in for good measure.” 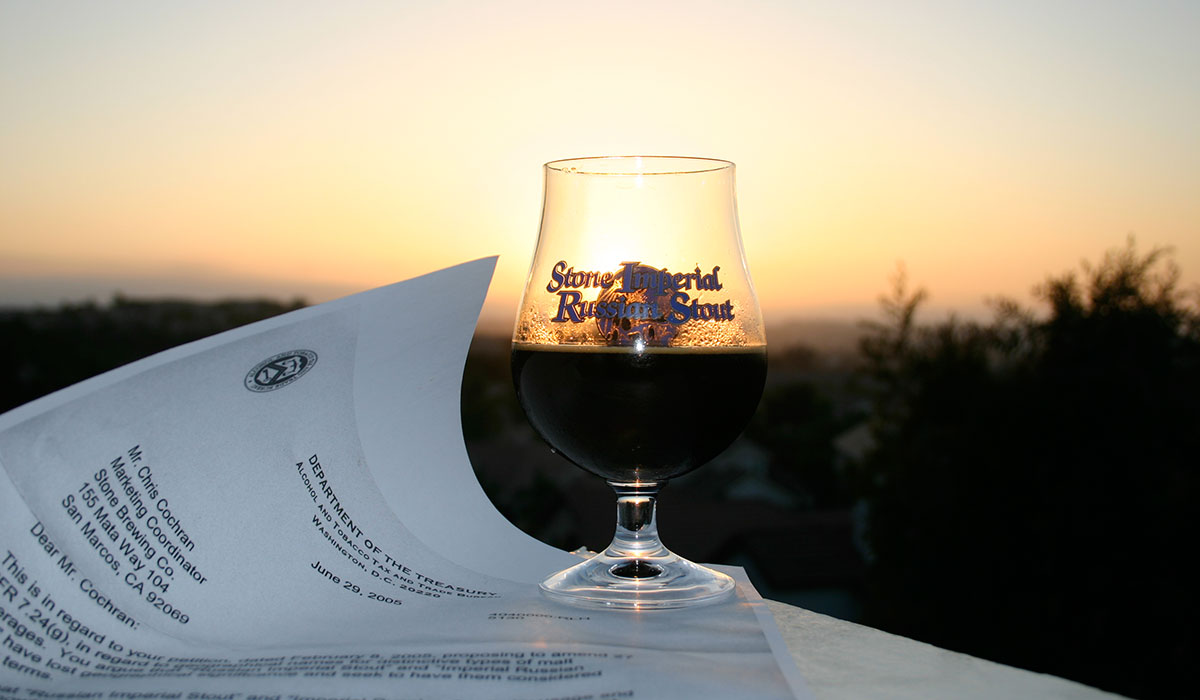 Now that we've charmed you with that heart-warming story, allow us to share how this year's Stone Imperial Russian Stout recipe breaks down:

Appearance: This beer pours black with a deep tan head of foam.
Aroma: Cocoa and coffee flavors dominate, along with some fruity fermentation esters and some yeasty breadiness.
Taste: Stone Imperial Russian Stout is mostly about roasted malts. Bittersweet cocoa and coffee flavors are the major players, along with fruitiness, hints of anise, and yeastiness, followed by a smooth, balanced, and not at all sweet finish.
Overall: We don't change this recipe much from the original version that our President & Senior Brewmaster Steve Wagner designed in 2000. It's a fantastic recipe, and we love brewing it every year!

Even trade a bottle of my recent Black IPA home brew for Imperial Russian Stout? ;)

Never knew that it would be such a battle to get "Russian" in the name. After finding out that the brew has nothing to deal with Russia, makes me a little sad. I was looking forward to wearing my commie cap speaking with a butchered vraussian accent. I kid, or am I... Completely kidding.

Stone's IRS has been my favorite since the beginning.

Loved the background history and definitely loving the IRS. I live in MN and we're happy to have Stone here now (since Feb 2011-ish). Hope to come visit you guys someday. Cheers!