A beautifully sunny day, 400 people, 30 unique beers on tap and unlimited pours—what might sound like the foundation for a ruckus affair of over-indulgence and belligerence was anything but. In fact, it was one of the tamest event days in the history of Stone Brewing World Bistro & Gardens. That’s what happens when you pack the joint with homebrewers and genuine craft beer connoisseurs united in their noble mission to not only taste, but evaluate the merits of each beer for the purpose of selecting a champion to grace store shelves nationwide. Enter Stone’s fifth annual AHA Rally and Homebrew Competition.

This year’s rally was the largest yet, and featured an astounding array of creative beers ranging from a cucumber saison to a double oat imperial pale lager to a combination braggot and imperial IPA. Attendees sampled their way through the diverse field before submitting their votes for the best of the bunch. Once those submissions were tallied, the top vote-getters were forwarded to an expert team of beer tasters led by Stone Co-founders Greg Koch and Steve Wagner along with Brewmaster Mitch Steele, Small Batch Brewer Laura Ulrich, and Craft Beer Ambassador “Dr.” Bill Sysak. 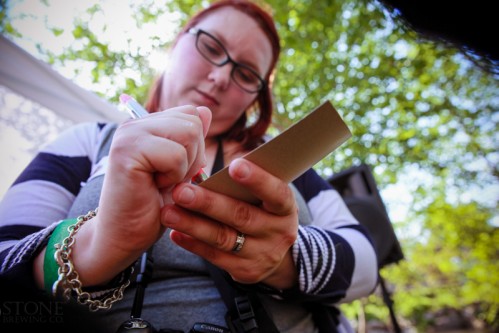 The finalists included a coconut India pale ale, vanilla chai-spiced imperial milk stout, saison, wood-aged California common, Citra-hopped double IPA, and a chocolate imperial stout flavored with Mayan spices. After much back-and-forth from the judging panel, the Coconut IPA crafted by Society of Barley Engineers brethren and collaborators Robert Masterson and Ryan Reschan edged out the Vanilla Chai Latte, earning the duo the opportunity to brew their beer on Stone’s system and have the finished product distributed to the masses this summer. Expect a brew with such a lusciously sweet, tropical aroma you’ll be challenged to break away from inhaling long enough to take a sip. Soft in tone and texture, it’s an elegant and restrained IPA that harmoniously marries lightly toasted coconut with Citra and Galaxy hops. 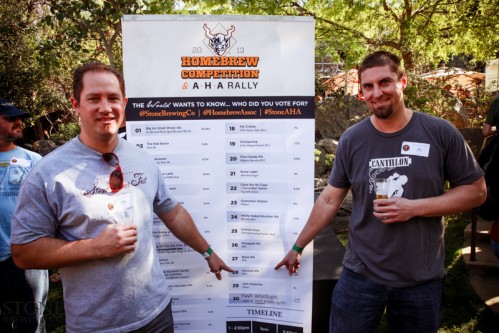 Robert Masterson (left) and Ryan Reschan do as our attendees and judges did, pointing out their winning entry.

While Masterson and Reschan prepare for their big brew day, we’ll already be hard at work on another collaboration beer, inviting a rather high-profile pair of conspirators into Stone’s brewhouse. The first is well known by sci-fi and Hollywood fans as the actor who played Wesley Crusher on Star Trek: The Next Generation, the lead role of Gordie Lachance in the movie adaptation of Stephen King’s Stand By Me and, most recently, himself on the reigning number one comedy in America, The Big Bang Theory. He’s also the founder of a Comic-Con spin-off variety show called w00tstock, an avid homebrewer and, coincidentally, was our 10,000th email newsletter subscriber. This well-known renaissance man is Wil Wheaton.

A long-time and highly engaged supporter of all things Stone, he and our aforementioned co-founder, Greg, have shared many beers and conversations over the years. It was only a matter of time before GK extended Wil an invitation to the brewhouse, but instead of a tour or rock ‘n’ roll camp experience, Wheaton will don boots and roll up his sleeves to help brew a yet-to-be-announced craft beer offering that, like Masterson and Reschan’s, will make it to retail accounts across the U.S. Aiding Wil in this endeavor will be his friend, Drew Curtis. The creator of the satirical breaking news website, Fark.com, Curtis aims to bring his passion for craft beer (which admittedly leans more to the act of consuming than consummation) to what will surely be an inventive and outlandish creation. Wil and Drew will enter the brewhouse on April 3. Before becoming sweaty and spent like the milled grains they’ll be rendering, they’ll kick things off with a brew day eve meet-and-greet at Stone Brewing World Bistro & Gardens on the evening of April 2. If you’re in the area (or even if you’re not…this is Wesley Crusher we’re talking about here!), plan on swinging by at 5:30 p.m. The release of Wheaton and Curtis’ collaboration beer is planned to take place around the time Comic-Con takes over San Diego, so set your phasers to stun and your taste buds to anxious. We’re harnessing the powers of space and the stars to bring you something you’ve never seen or tasted before!