We, like many hopheads, are immensely bullish on the incredible flavor and intense citrusy, bitter impact provided by our ultra-fresh Stone Enjoy By IPA. But believe it or not, for us, it isn’t just about the beer. Yes, given the massive outpouring of affection for this West Coast double IPA, that last statement sounds kind of odd, but it’s true. Stone Enjoy By IPA was forged with greater intentions than mere satiation. It was designed to convey the importance, nay, the necessity of drinking hoppy beer when it’s fresh. We overtly stamp each batch with a 35-day Enjoy By date, and when that day comes up on the calendar, this beer should be out of your fridge and off retailers’ shelves. Drinking it beyond the date printed on that evergreen bottle simply won’t provide the same, vivid experience. But we went far beyond the bottle, communicating the facts on freshness via our Stone Enjoy By IPA website and our social media channels. It was a worthwhile endeavor, and much of that was thanks to you. Through social conversations online and over pints of this beer, many who had no idea how important beer freshness was have been converted, thus improving their quality of life and craft beer enjoyment forever. For those of you who helped increase the reach of that lesson, we thank you and are excited to share the steps we’ve taken to further broaden the reach of this important message and share in the many splendors of Stone Enjoy By IPA. 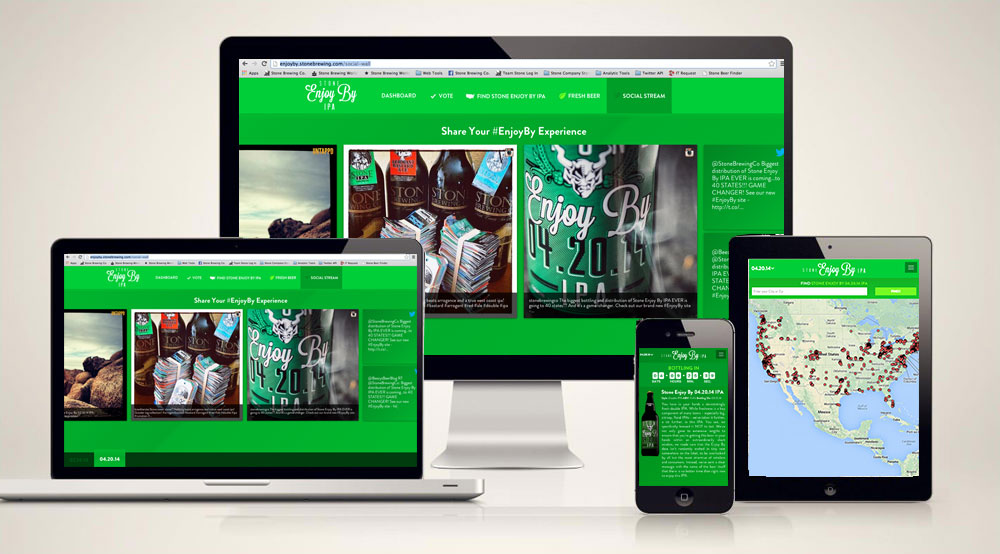 First off, we recently funneled our creative energies into revamping the Stone Enjoy By IPA website to make it more user-friendly and more friendly in general. As you’ll see after clicking over to this bright green, hop-inspired virtual realm, it’s easier than ever to get involved in and perpetuate the conversation around this beer and the enhanced condition afforded when beer is consumed at the peak of freshness. And now, in addition to streaming thousands of posts to Twitter and Instagram, we’re also tapping into an entirely new social network—UnTappd. That’s right tech-savvy beer enthusiasts, the app that tells the world about the fine craft ales and lagers you sip and savor will now contribute to shared enjoyment and interactions with other nth level beer fans. 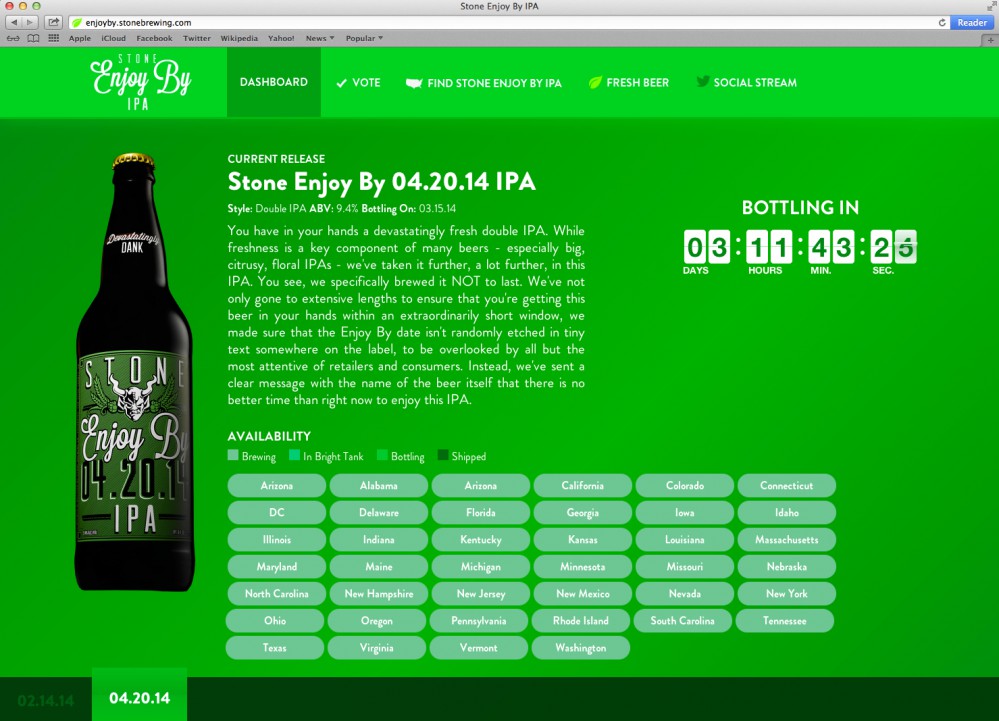 The aforementioned trio of social media platforms will also assist fans in getting their hands on Stone Enjoy By IPA. When we originally conceived this beer, we were only able to make a little bit at a time due to the complicated process of bottling and shipping the beer same-day to ensure it got to retail outlets in time for fans to purchase it with plenty of time left before the Enjoy By date. Even as we were able to ramp up and produce more of the beer, the logistics remained a challenge. To be honest, the larger the batches got, the more difficult distributing it became. But, from the get-go, we took steps to make sure the beer went to the parts of the country that wanted it most in order to prevent the beer from sitting on shelves and being disposed of rather than enjoyed by the many who clearly wanted it. Once again, this involved the social interaction spawned by the beer. Much in the way that certain bands reach out to their fans to help gauge demand when laying out their tour routes, we asked people talking about Stone Enjoy By IPA online to enter the hashtag #EnjoyBy followed by their state or region (i.e., OR, WA, DC, NorCal, SoCal) so we could see where the most buzz about the beer was loudest. It worked like a charm, thanks to the highly vocal nature of our devotees. But that didn’t mean there wasn’t room for improvement in this area as well.

The tracking system for mentions of Stone Enjoy By IPA has changed. Not dramatically, mind you, but for the better. In having fans locate themselves by entering whole states or regions, our former system made it a bit difficult for us to pinpoint the exact communities and areas our fans were posting from. From here on out, we’ll be collecting ZIP codes to up the accuracy of our geotargeting and make for added efficiencies in getting the beer to you as quickly as possible. The only change is that, when you post about Stone Enjoy By IPA, you’ll need to type in #EnjoyBy immediately followed by your five-digit ZIP code. And if you’re using UnTappd, simply add your ZIP code in the “notes” field when checking in Stone Enjoy By IPA. A data field has also been added to the Stone Enjoy By IPA website where you can enter your ZIP code if you’re a little less conversational, but still want to be heard. These simple but effective tweaks, along with the current release of Stone Enjoy By 04.20.14 IPA, usher in the next new and exciting chapter in the evolution of this beer and the lofty mission behind it. Take the next step with us and tell us all about it. Both we, and a world of craft beer enthusiasts, are listening! 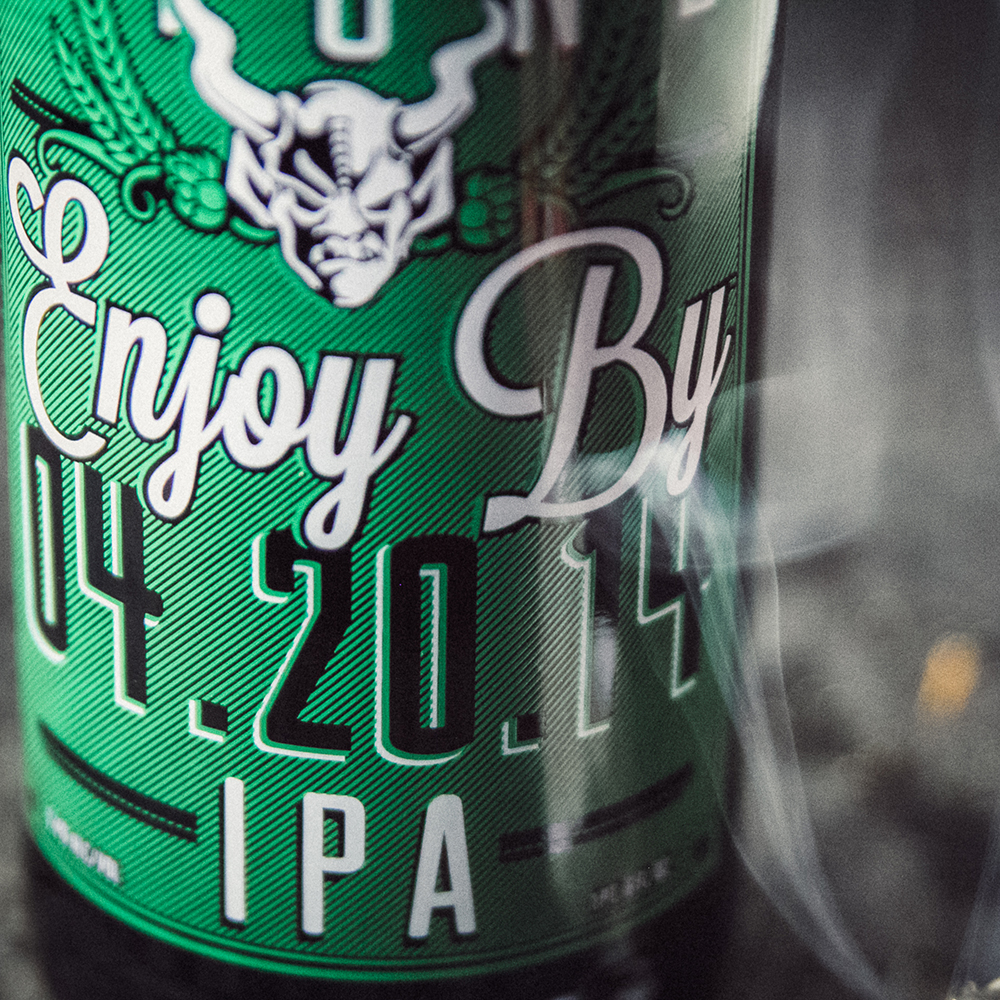