Stone makes nine year-round beers. For most brewing companies, that’d be enough, especially when you add in the massive number of specialty beers, collaborative ales and other cool non-year-round stuff we cram into the brew schedule. But we’re not most brewing companies. We know that the face of American craft beer is constantly evolving, and with it, the tastes of beer drinkers across the nation. While we’ll never follow trends (but will absolutely do our darndest to start a few), it’s important to keep our eyes, ears and palates open to what our fans desire, and we’d have to be blind, deaf and dumb (in the literal sense) to fail to see beer fans’ love of session India pale ales. They’re popping up everywhere as folks look for lower-alcohol beers delivering the poignant flavors of imperial IPAs. There’s definitely a plethora of modern day scenarios and a need for lighter ABV brews. These served as the impetus for brewing our Great American Beer Festival gold medal-winning session beer, Stone Levitation Ale in 2006. But beer lovers cannot survive on amber ales alone—even if they are intensely hoppy and just 4.4% ABV—so we spent much of 2013 working on several recipes for our very own session IPA, and now, that fruity, piney, altogether hoppy newcomer, Stone Go To IPA, will be available to fulfill your big flavor sans overwhelming ABV needs all year long. 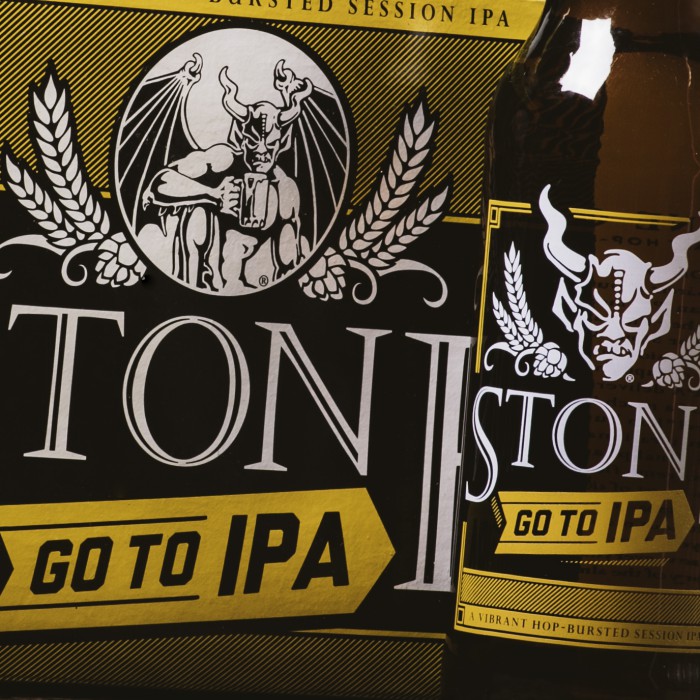 In presenting the world with a session IPA, it was of the utmost importance to us that fans benefit from the superior drinkability of a 4.5% ABV beer as well as a vibrant hop bomb character that they (AND US) adore. As such, Stone Go To IPA brings all the resinous, citrusy oomph hopheads rightfully crave…just in a lower alcohol package. Simple, right? No, actually. It wasn’t easy and it took us a while to dial it in, but in the end we were able to bring it in the lupulin department thanks to the use of a cutting edge brewing technique called “hop bursting,” wherein a, frankly, unreasonable amount of hops are added at the end of the boil and whirlpool stages so that the finished beer takes on a mellow bitterness and massive hop aromas. Our brewmaster, Mitch Steele,is a big-time proponent of this method, so much so that he even wrote an article about it last year for Zymurgy Magazine. After tasting this beer (over and over and over again) and falling in love with this new year-round treat, we can see why he’s all about the burst.

“I’ve really liked the session IPA style since we brewed Ballast Point/Kelsey McNair/Stone San Diego Session Ale back in 2010,” says Steele. “I love the idea of a beer that has the hop character of an intense IPA, but an alcohol content low enough where one can enjoy several pints.”

For years, Steele actually campaigned for Stone to brew a session IPA, but due to capacity issues (and we thank you all for creating the type of demand that keeps us that busy), it wasn’t possible. Thankfully, in 2012, we installed a brewhouse exactly mirroring our initial system, providing the ability for us to finally focus on this passion project of our brewmaster. Having had time to adequately pine and plan, he knew exactly what he wanted for what would eventually become Stone Go To IPA. 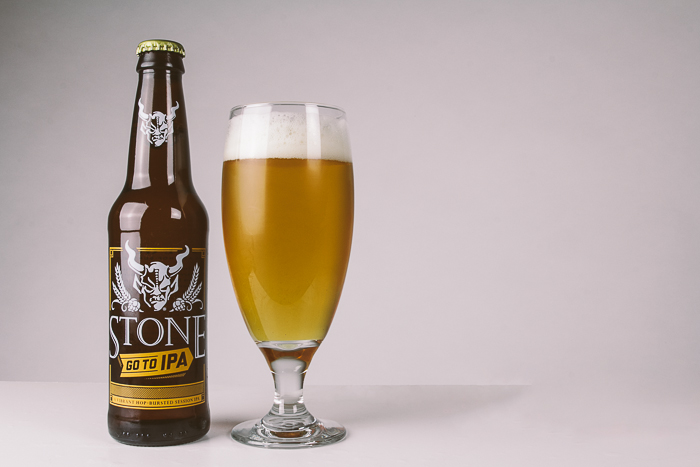 “The first and only consideration was that the beer had to deliver on flavor. It had to represent what we do at Stone, and at 4.5% ABV, that’s a challenge,” says Steele. “Alcohol actually adds quite a bit to the flavor and perception of flavors in beers. It’s a real test to brew a beer at a lower alcohol level and have it deliver on the flavor like a beer at 7 or 8% ABV does. Many lower alcohol beers can taste thin and watered down, and that’s not the case with Stone Go To IPA. I’m quite pleased with how this came out. The hop intensity is incredible.” 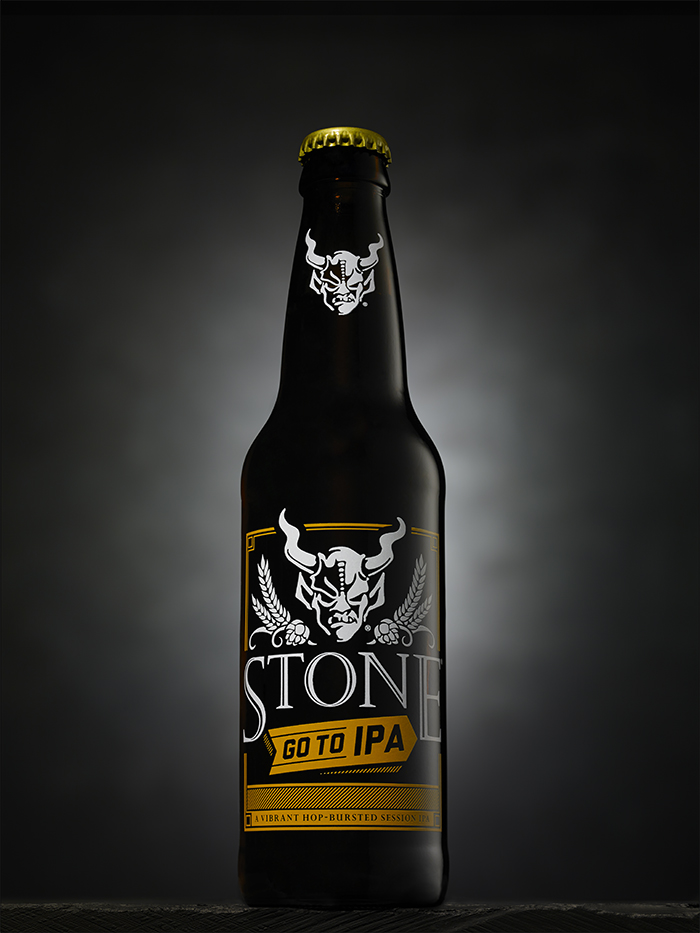 Stats & Tasting Notes by Brewmaster Mitch Steele ABV: 4.5% IBUs: 65 Availability: Year round, 12-ounce bottles in six-packs, beginning March 3 Hops Bill: Mosaic, Citra, Ahtanum, Cascade, Crystal, 06300, El Dorado, Magnum, Sterling Appearance: Pours light gold with a white-colored head of foam. Aroma: The hop aromatics exude intense peach, citrus and melon flavors dominate the aroma in the best possible way. Taste: Hop flavors continue to dominate, but balanced by just enough malt to keep things reasonably in balance. But make no mistake, this beer is very, very hop-forward! Palate: Dry and bitter. The finish makes you want to drink more. Overall: This beer employs the “hop bursting” technique, a hopping technique where all or most of the bitterness in the beer comes from late hop additions in the brewhouse, like at the end of boil and in the whirlpool instead of the more traditional approach where most of the hop bitterness comes from earlier additions at the start of the kettle boil. The result is a beautifully aromatic beer with substantial, but somewhat mellow, bitterness. The hop bursting also enhances the flavor retention of the hops and, combined with the dry-hop, creates a very intense and complex hop flavor. 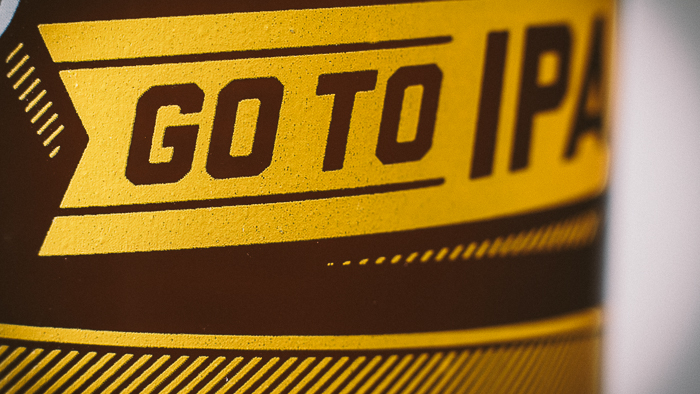