As I stand here in my office, tasting our very first batch of Stone Enjoy By Black IPA in order to submit my official tasting notes, it’s given me time to reflect on how this beer came about and how the black IPA style has been such an important part of Stone over the last several years. 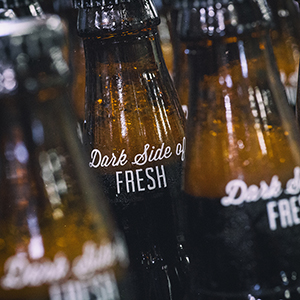 Back in 2007, I asked (some would say pushed) Greg and Steve on the idea of brewing a black IPA for our 11th anniversary beer. The whole idea of this “new” beer style intrigued me a lot—an intensely hoppy black ale whose roast malt character wouldn’t overshadow the hop flavors. In other words, a beer that looked like a stout but drank like a West Coast IPA. When we came out with Stone 11th Anniversary Ale, we were all thrilled with the result. We landed on a hop combination (Simcoe and Amarillo) that worked magically in the beer, and this release, to our recollection, was the first large-scale (national) release of a bottled black IPA. The beer was so successful that we later launched it as a permanent brand, Stone Sublimely Self-Righteous Ale (later rechristened Stone Sublimely Self-Righteous Black IPA). We enjoyed brewing and drinking that beer until we sadly discontinued it earlier this year.

For our 15th anniversary, in 2011, Greg and Steve asked that we brew the biggest, blackest, hoppiest black IPA we could, and that beer became Stone 15th Anniversary Escondidian Imperial Black IPA. “Escondidian” was a fun poke at the controversy that was developing around the proposed style name “Cascadian dark ale,” a name we thoroughly disliked, especially since the black IPA style originated in Vermont, nowhere near the Cascades. We always preferred to call the style “black IPA,” despite the oxymoron that name presents. But my logic was always that if craft beer drinkers saw a black IPA on a beer list, they would instinctively know what it was and how the beer would taste, and that worked just fine for me.

We have brewed several variations of the black IPA style at Liberty Station and on our pilot system over the years, but obviously we’ve brewed a lot of other IPA types too. And one of my favorites is Stone Enjoy By IPA.

Three years ago, Greg came to my office and told me that he wanted us to brew a double IPA that had a 35-day shelf life, and it would be named “Stone Enjoy By XX.XX.XX IPA,” with the “Enjoy By” date painted large on the front of the bottle. We freely created a truly unique and delicious take on the double IPA style, using New Zealand and Australian hops for the first time in one of our beers. The beer and the concept were very successful. It had the shortest official shelf life ever for a beer, and it helped deliver a really important message: that many IPAs or double IPAs should be enjoyed as soon as possible to get the full flavor of the hops. There were many logistical challenges with packaging Stone Enjoy By IPA and getting it shipped same day to various wholesalers around the country so that retail accounts would have access to the beer when it was only one to three days old. But the system we developed worked, and it’s worked ever since, even as we have expanded the Enjoy By program in volume and distribution.

Because of the success with Stone Enjoy By IPA, and to soften the grief of having lost Stone Sublimely Self-Righteous from our full-time lineup, Greg felt that it would be really interesting to brew a black version of the beer. Similar to the process with Stone 11th Anniversary Ale, we brewed a LOT of prototypes, both on our five-barrel pilot system in Escondido and at our Liberty Station brewery. We tried several de-husked black malts (which provide color but very little of the astringency you get from the black malts normally used in stouts) and many hop combinations, mostly American hops. By about the fifth version, Greg mentioned during our tasting panel that he really wanted the beer’s hop profile to be something similar to Stone Enjoy By IPA, and so we switched gears and focused on some great Australian hops we had found through our hop trial program. We decided on three varieties to use in the dry hop: Galaxy (a mainstay in the Stone Enjoy By IPA dry hop), and Vic Secret and Ella, which some may recall were featured in our Stone 19th Anniversary Thunderstruck IPA. 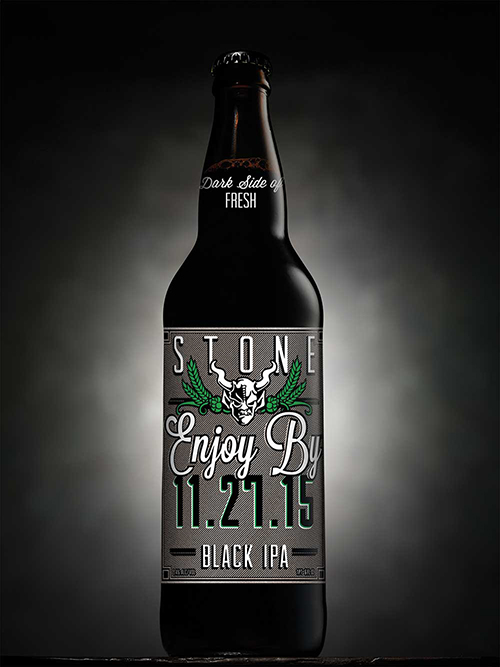 Tasting this finished beer now for the first time, I have to say that I am extremely happy with the result. The beer is deep black, has an intense tropical fruit and dank hop aroma, and it’s bitter as hell. For those who love the hop profile of Stone Enjoy By IPA, this beer will be a winner.

* Limited availability in CA only. National launches are planned for 2016. Visit the Enjoy By website to learn more.

I have been going through withdrawal since the cancellation of Self-Righteous/11th. So happy to have black IPA back in my life. This beer is delicious.

Mitch is the best!! May Black IPAs never die!

WHY AM I NOT GETTING THIS IN OHIO?!?!? grumble grumble... dang Stone... grumble.... withholding delicious beer from my location due to limited releases... grumble...

When are you going to tell the world that your delicious vanilla 'porter' beer was named after me? lol

YES. Had this brew last night, and it is absolutely fantastic. PLEASE make this a regular release.

Agree with the gent above. Sublimely Self Righteous is/was the most amazing beer ever. Please keep it's DNA alive in other variations-All The Time!

My husband is a fanatic for your Enjoy By series!!! His Birthday is 11/27.... We are in WA, what are the chances I could get my hands on this beer for him?!

Hi - I really enjoyed the Black IPA! I live in Pittsburgh and purchased a growler at the local Giant Eagle - Market District. Do you know where I could purchase a case?

Why did you kill my most favorite beer ever, the sublimely self righteous ale. I even loved the name. No better beer has ever been brewed. I was hopeful the enjoy by would fill the void but alas it did not. Please bring ssra back. Please.

Amen John.
SSRA is the best black ipa I have ever had. I loved it so much I have a tattoo of the gargoyle on the bottle.
Bring it back!