It took just a few short hours after the big keg drop at the Stone New Year’s Celebration for us to get to work planning another big year at our Southern California digs. After a few weeks of scheming, tweaking, revising and fine-tuning, we’re ready to share our entire schedule of momentous events that will come to pass at Stone Brewing World Bistro & Gardens*in 2013! Get out your calendar and prepare to “X” out a great many dates. See you soon! 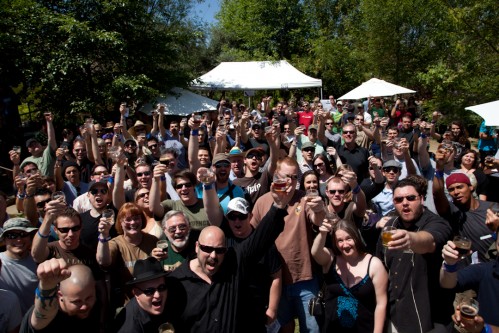 First Quarter Stone’s Beer U, a series of monthly events marrying education and imbibing through topics ranging from the history of brewing to the nitty-gritty of various beer styles, kicks off on January 28 with Beer 101: Intro to Beer. A class on the basics of beer, it will feature eight pours of awesome brews including such coveted gems as Russian River Pliny the Elder, The Lost Abbey Serpent’s Stout and Cascade Kriek. Remember, knowledge is power and beer is magic! Tickets are available here. The next day, January 29,  “Dr.” Bill Sysak and Chef Alex Carballo’s vaunted Master Pairings dinner series will start with a coming-together of Team Stone recipe contributors to the new Chefs Press cookbook Brew Food: Great Beer-Inspired Appetizers, Main Courses, and Desserts. Enjoy dishes and pairings like quad-braised osso bucco with St. Bernardus Abt 12 from Sysak and tilapia ceviche with Stone Ruination IPA from Carballo, as well as food-and-beer one-two punches from Brewmaster Mitch Steele, GK and even yours truly. Tickets for this combination dinner and book-signing are available here. 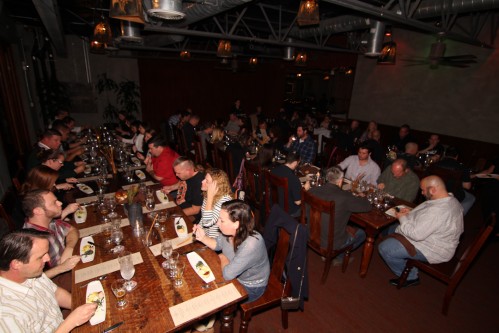 The first weekend of February brings the first fermentable flurry to the Bistro bar in the form of the seventh annual Stone Winter Storm on February 3. 100 Stone beers, including archived rarities like the last keg of Stone 02.02.02 Vertical Epic Ale, 2004 Stone Old Guardian Barley Wine Ale, Stone 7th through 16th Anniversary Ales, Crime and Punishment (including versions of each aged in Scotch whisky barrels), and StoneWall Ale will share space on a gargantuan menu board so extensive it’ll confound even the most seasoned Stone savant. That’s a lot of beer! Realizing this, we’re offering early entry and a breakfast bar for fans purchasing tickets to attend our two-hour The Calm Before the Storm event. Clear your weekend…and arrange for transportation! Love brewing your own beer as much as you love drinking ours? Cool! We’d love to taste what you’ve got and are presenting an opportunity for you to turn the tables on us at our annual March Madness Homebrew Competition and AHA Rally. Each year, homebrewers compete for the opportunity to have their unique recipes produced in Stone’s brewhouse and distributed across the nation. Last year’s winner was homebrewer Ken Schmidt’s “Pillow Mint at the Ritz” which hit shelves under the moniker Ken Schmidt/Iron Fist/Stone Mint Chocolate Imperial Stout. Think you have what it takes to take the crown this year? Sign up early on the registration page, get that recipe locked down and set your sights on March 9. (Note: All of this year’s entries must be submitted in kegs.) Second Quarter Oakquinox, the first of our grand festivals held annually in our outdoor gardens, will take place on April 7. An outdoor ode to the beer-enhancing properties of wood, it will feature a plethora of rare or just plain luscious barrel-aged beers from around the world. That extensive list will, of course, include lovingly matured Stone brews from our rapidly growing inventory of wine- and spirit-tinged barrels. Consistently one of the best festivals of its kind in the world, it’s just like the beers it celebrates and continues to get better year after year. The arrival of summer marks the dawn of our Stone Late Night Movies Series where, each Wednesday evening, we set up a screen in our gardens and invite fans out to enjoy some fine craft beer and a flick. We get so excited about this cinematic tradition that we launch it before summer actually gets here (the first movie night will take place on June 5, more than two weeks ahead of the sunny season), but we’re pretty sure that, once you’ve enjoyed one of them, you’ll be OK with us jumping the gun. 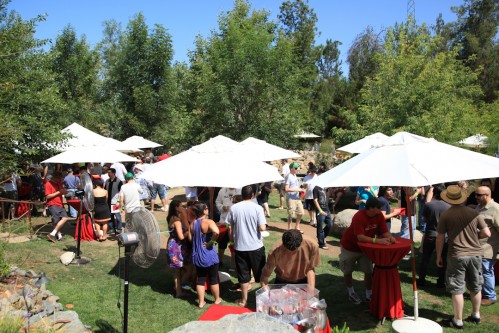 On June 23, we’ll once again invite fans of gueuzes, lambics, krieks, Berliner weiss and the like to pucker up at Stone Sour Fest. A seven-years-strong tradition, this day-long event provides one of the most amazing and voluminous arrays of sour beers you’re bound to find anywhere. Considering how difficult it can be to procure these tart beauties, having them all at one’s fingertips all at one time is a big deal…and we treat it that way. If you’re already a sour fan, you’re in for a treat. If you’ve never had a sour beer, this is the best place to find out what the buzz is about and gain an appreciation and another beery obsession! Tickets for this event tend to sell out around a month in advance, so get your tickets early. Third Quarter August, a month devoid of traditional holidays and causes for revelry, will be punched up as it is each year by our two-day Stone Anniversary Celebration & Invitational Beer Festival. This year, we’re hitting the big ONE-SEVEN (17 for those who aren’t fans of numbers in letter form). As has become the Stone way, we’ll take two opportunities to get our friends and colleagues in the craft beer industry involved, starting with a Brewer’s Reception on August 16, where fans will have the chance to sip, sup and rub elbows with some of our boot-wearing industry comrades. The next day, August 17, we’ll put those brewers to work in a manner they’re more accustomed to, manning booths and pouring their delicious beers into commemorative glassware. 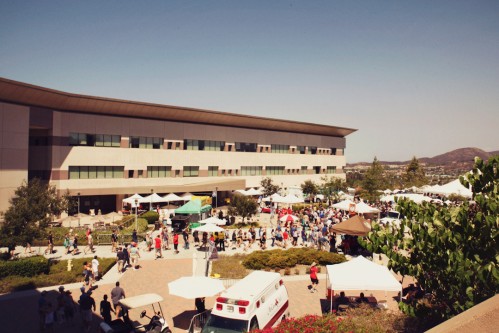 Fourth Quarter Last but not least is our Pour It Black festival on October 20. Many would falsely assume this is a fete centered around just porters and stouts—and that’s the whole reason this festival exists. “Dr.” Bill wants beer drinkers to be aware of how broad and diverse the darker side of the beer spectrum has become. Nowadays, even IPAs and sours are lurking in the shadows, bringing on roasty, smoky, chocolaty flavors every bit as poignant as imperial stouts and the like. Experience the myriad of taste sensations in person and have one heck of a good time doing it. It’s never too late to plan ahead for something this good! * Please note that the Stone 17th Anniversary Celebration & Invitational Beer Festival will take place on the campus of California State University, San Marcos, NOT Stone Brewing World Bistro & Gardens. It’s just so much fun, we couldn’t keep from mentioning it!