A First Tangle with Liquid Arrogance

There are watershed moments in everyone’s existences where they look back and see that an event, perhaps comprised of little more than a few seconds and seemingly meaningless at the time, changes the trajectory of one’s life forever. For some, it can be sage words from a wise individual or exorcising themselves from the grip of a premature demise. For others, a chance encounter with the love of their lives or a moment of introspection so deep it inspires sea change, the pursuit of lifelong dreams or the abandonment of ill-conceived ventures in favor of aspiring to something better. And then, for some, there’s the discovery of something life-changing—an artifact, an heirloom, a new technology, a book, a religion, a field of study…or a beer. At first blush, that last one seems like an exaggeration; something you’d expect from a macrobeer commercial wherein some heretofore severely lame, nerdy member of society cracks open a cold-as-the-Rockies can of lo-cal, lo-flavor adjunct pilsner, then suddenly finds himself surrounded by a harem of supermodels on the deck of his new yacht as it pulls into the personal dock at his annexed island mansion in the Bahamas. My story does not end like this, but the tale of my first encounter with Arrogant Bastard Ale does lead to a very happy ending.

Picture it, a Friday night in San Diego during the fall of 1998—a young man yet to quaff his first beer saunters into a low-frills, seemingly Irish-themed bar on the edge of a strip mall that, otherwise, is completely occupied by Asian restaurants. The name of that establishment—O’Brien’s Pub. The mission of the group—beers to kick-start the weekend. Did anybody in the quintet know this was an early Mecca for craft beer in a city that would evolve to become, arguably, the epicenter for craft beer in the United States? Nope. They all just happened to work a half-mile away at a microelectronics manufacturer that often inspired them to seek out adult beverages to help erode the stress of the nine-to-five. The other four laborers in my group hit up O’Brien’s pretty regularly and, thinking I’d make a decent addition to their social circle, had asked me to come along. A fan of friends and adult beverages, I took them up on their invite.

Upon entering the pub, as if by fate, a group of five cleared out from a table in the otherwise packed-to-capacity bar. We scurried over to claim their vacated territory as our own and, as my friends perused a whiteboard with a bunch of foreign-sounding names messily scrawled upon it—Bear Republic Racer 5, Russian River Pliny the Elder, Sierra Nevada Bigfoot—I thought to myself: Crap, I’ve never had a beer before and I don’t want to sound like a loser. What am I going to order? I started combing over my severely limited vernacular where beer brands were concerned, weighing each against the criteria that television ads and billboards had provided to tell me which was the fanciest, top tier choice. A waitress came to the table and, as if sensing the opportunity to completely humiliate a beer rookie, asked me what I’d like to drink. I cleared my throat and, in my deepest, manliest voice, replied: “Um, a Heineken?”

I’d hoped for the others to not even hear me or, if they did, only passively acknowledge the selection as they proceeded to issue their orders…but that didn’t happen. Instead, each of their faces elongated to gaping caricatures akin to Edvard Munch’s famed masterpiece, The Scream. It was as if their jaw muscles had gelatinized at the mere utterance of the Dutch macrobrew. I thought for sure at that moment that my drinking buddies had gone from to-be to would-be status, but then they exhibited the positive behavior that I would later learn is the hallmark of any good craft beer fan. Rather than shame me for being so ignorant to the craft culture, they had the waitress cancel my order and told her, “He’ll have an Arrogant Bastard Ale.” Rather than feel belittled or inferior, I felt gratitude that they’d taken me under their wing and helped me out. And, though I had no idea what Arrogant Bastard Ale was, I had to admit, it sounded a heck of a lot more interesting than any beer I’d heard of up to that point. 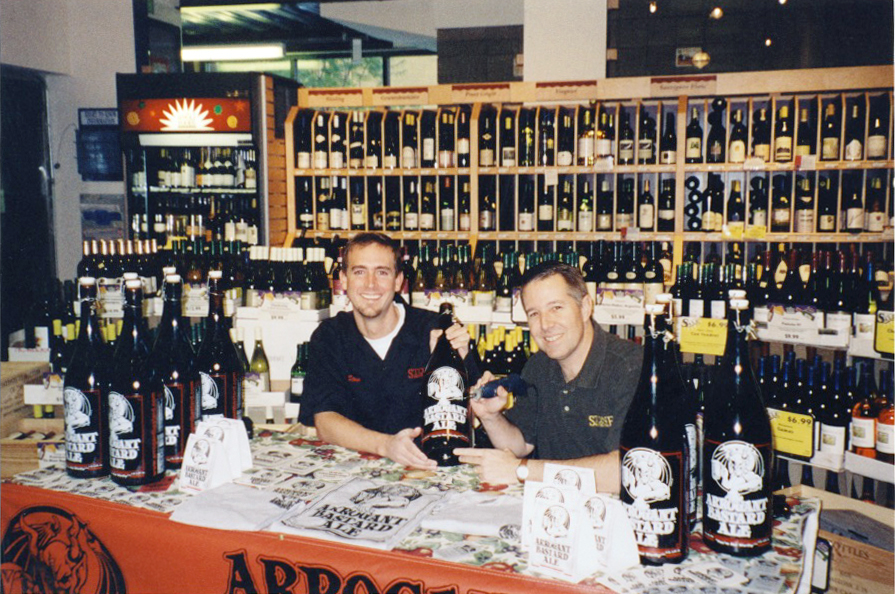 Stone Co-founders Greg Koch (left, and kinda hard to recognize without that beard) and Steve Wagner etch signatures into 3-litre bottles of Arrogant Bastard Ale in the VERY early days of this watershed beer.

When I asked the rest of my party about the beer, they explained it was a new brew from Stone Brewing Co. up in Escondido. At the time, I didn’t know San Diego County was home to any local breweries (to be fair, there were only a handful at the time), so that was another cool factoid I could get behind. Other than that, they really didn’t have any words to describe the beer. They just said I’d like it. They seemed trustworthy, so when the waitress returned with our pints, I found myself rather eager to try it. But first I had to get over something rather surprising. The beer wasn’t yellow, golden, straw-hued, pale or anything like any beer I’d ever seen. After years of watching many a sporting event on television, there was one thing I knew for sure about beer—it was yellow with a white fluffy head. But the beer staring back at me from my glass was reddish-amber in color and covered with a thin veil of tightly packed bubbles. Was this a good sign or some sort of defect? There was no way for me to know, so after a quick cheers to the end of the workweek, I took my first sip. This was my watershed moment.

Having never had any form of beer before, I came to O’Brien’s, and this beer, with zero expectations. From all I had been taught about beer, it was a light-bodied, effervescent beverage built to be moderate in flavor and high on the refreshment scale. This beer was thirst-quenching, but it was anything but low on taste. To the contrary, it was an assault on my taste buds that forced me to take notice in a way that, prior to that, I never had. A big burst of bitterness was what I noticed first, but as I went back for more and the beer got closer to room temperature, I could pick out (but not yet identify…this was my first beer after all) lots of other things that were going on, flavor-wise. It was a rush and, before I knew it, I was examining the beer, contemplating it in between jokes with my friends and stories about our shared workplace.

Fast forward 16 years, and I have come a long way from the craft beer virgin I was on that fateful day. That initial sip of Arrogant Bastard Ale set me off on a lengthy voyage to learn everything I could about craft beer, starting with the varieties produced in my hometown. It’s a journey I’m still on and, frankly, I have a long way to go. The craft beer medium is one of deep, intriguing, amazing history and, thanks to today’s innovators, that history gets richer by the day. I fell hard for craft beer that night, so much that it became a part of my everyday life and colored many aspects of it, from my personal time to my professional pursuits. Upon discovering the vibrant brewing culture that existed in my own backyard, I went on to become one of the first local journalists to write about the San Diego suds scene, first via feature articles in the county’s newspapers and magazines, and later as a regular and guest contributor for beer-related publications including Celebrator Beer News, The Beer Connoisseur, Imbibe Magazine and other high-profile national publications. Today, I am San Diego’s most prolific beer writer and the foremost authority on the local brewing industry. I have served as an expert on the region for TV and radio programs, and now put together an annual critical reference for the county, the Complete Guide to San Diego Breweries. But wait…there’s more. 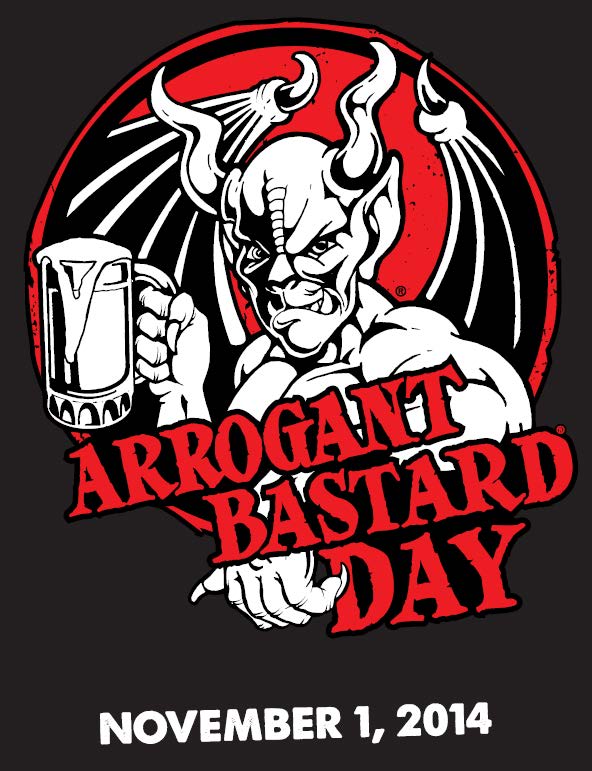 In 2012, after years of journalistic interactions with Stone Brewing Co., I was welcomed aboard as the company’s Communications Specialist, where I devote my love of craft beer and writing to such projects as the Stone Blog, social media and the back labels that grace bottles of our beer. In this role, everything that I am passionate about intermixes to create a symbiotic situation where both myself and the brewing company that first opened my eyes to the world of craft beer, benefit greatly. Would that have happened if I’d ordered a Heineken that night? Absolutely not, and that’s why Arrogant Bastard Ale holds a very special place in my heart and is responsible for altering the course of a life that, thanks to that well-timed sip of American strong ale, is better than it ever could have been without it. Because of its longevity and prominence in the pantheon of great, noteworthy craft beers, there are many people out there with stories of how Arrogant Bastard Ale changed their perceptions of beer and played an integral role in their development as a fan of high quality, artisanal ales and lagers. We encourage you to share them with us on social media using #BastardDay and, when applicable, tagging the awesome people who introduced you to this bold, bawdy, badass American classic—credit where credit is due for a truly quintessential and very special brew.