Hey, Chicago. The Least You Can Do is Send Us a Postcard.

The marketing manual for sheeple herding says that we’re supposed to engage you by soliciting user-generated content with catchy challenges like this: “Hey die-hard Stone fans! Show you’re the Ultimate Stone Head by posting sweet pics of you and your BFFs at Stone Beer Week-Chicago events on our Facebook fan page! And don’t forget to Twitterize us with #StoneWeek hash-tags! Win a Frisbee!”

But we know you're a whole lot smarter than that. In all seriousness, since we won’t be sending everyone from the brewery to Chicago this week, we’d like to get some vicarious pleasure from the absurdly decadent events we’ve been working so hard to plan, which is why we’re asking you, for real, to post those Facebook pics and Tweets about Stone Beer Week-Chicago. So do us that favor, will ya? 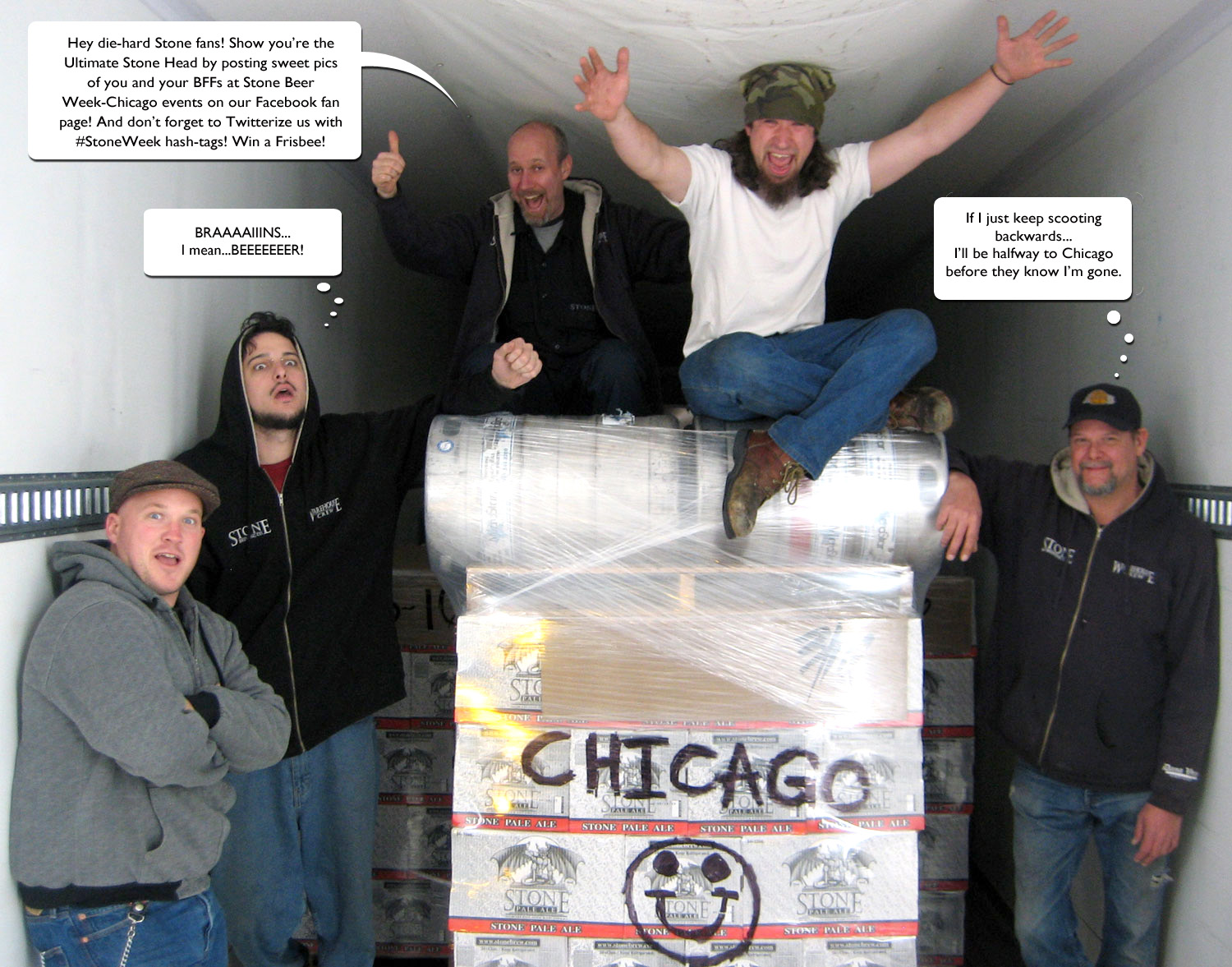 Now let’s back up a bit. As a supremely plugged-in Stone fanatic, you are undoubtedly aware that our exceptionally beautiful beers will finally be available in Chicago starting April 1st. Yes, the wait has been long and arduous for the legions of bastardly disciples in the Second City, but we aim to make up for lost time—in a hurry.

To that end, we have planned an epic week-long celebration of all things Stone, entitled Stone Beer Week-Chicago*. A veritable carnival of Arrogance will introduce us to Chicago with proper gusto from April 1st-9th. This extravagant series of soirees will see us taking over an entire grocery store, hosting 30 taps at a single bar, offering an ultra-rare tasting of Stone Vertical Epic Ales with Greg Koch himself, grilling up Stone Smoked Porter sausages, presenting incredibly tasty barrel-aged versions of our most ambitious beers, pairing exceptional food with fine vintages from our past, and the list goes on and on…

Do those kinds of events sound enticing to you? What if I told you that the events mentioned above represent a mere fraction of the 34, yes thirty-four, events planned for Stone Beer Week-Chicago? And what if I added that the remaining Stone events will be every bit as awesome, such that Stone Beer Week-Chicago will feature a concentration of Stone awesomeness that the world has never seen before? That would be exciting for you, wouldn’t it?

Well that’s great, because while I’m stuck here in sunny San Diego, you’ll be cabbing/bussing/train-ing/shuttling/walking from one jaw-dropping Stone event to another, having the time of your life sipping some of the sweetest nectars this brewery has ever made. So enjoy yourselves Chicagoans. You’ve earned it. Just don’t forget to send us a postcard, mmmmmk?

*Best said in a Big Announcer Voice with lots of reverb.

Excited for Stone Brew in Chicagoland! My brother has worked at Stone for many years and I've visited several times. Anyone who heads to N. San Diego should put it on their agenda. Great place to visit and eat! Spend time in the beautiful garden and enjoy some relax time!

I cannot wait for the event at Finnegan's in Plainfield!!

Jacob -- We will send a postcard. Headed to Tribes Ale House in Mokena, IL tonight with camera in tow to see you guys. Cannot wait for that first pint of bastard to hit my lips. Soooo thirsty.....

Lookin forward to the event tomorrow at the SmallBar locales. thx for hookin us up w some killer brew. people are going bananas about it. well done. cant wait to meet the crew that is here in chicago for the events. and will def come out and meet the rest of you next opp i have. thx again, and keep up the good work!

Very excited for today's event at the massive whole foods store on kingsbury st., aptly described as stone brewing taking over an entire grocery store. i also will be attending the binnys event tomorrow, and am hoping for a commemorative chicago t shirt to help remember these great events.

As a relocated, midwestern Californian, I am desperatly wishing that Illinois was just a little bit closer to our little hunk of land in East Iowa! We still have to drive to East Dubuque, ILL to find any serious beer! We have resorted to brewing our own IPA and Amber Ale - unfortunately not as good as Stone - yet. We are still looking forward to your assault on Iowa someday, in the meantime, we are planning a trip to Chicago someday just to go buy some serious Stone ales. Thanks for the great work and your takeover of the midwest...

Just had a sublimely self righteous with a couple of friends at Geneva Ale House in Illinois.It's a great Beer and look forward to drinking many more!