All About Our Yeast: Part Deux

Gone, but in no way forgotten (guys as extraordinary as our former media and communications linchpin are impossible to forget), Randy Clemens is returning with a special edition Stone Blog post to close-out his two part series on Stone Brewing Co.'s yeast. Enjoy! When we last left off, you’ll recall that we’d taken a trip down to see our friends at White Labs to learn a bit more about the unsung hero of our beer: the Stone yeast strain. We got to see where the yeast was stored and how it was cared for, but what happens once it gets into our hands? 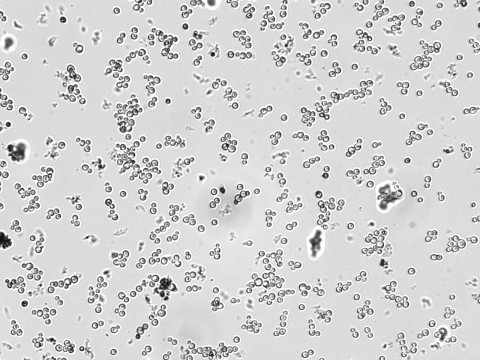 Stone's yeast strain under 40x magnification at a 2x dilution from a batch of fermenting IPA.

For answers, I turned to Stone’s resident beer science geek extraordinaire QA Analyst Rick Blankemeier, who showed me around the lab space here at the brewery. While White Labs does most of our yeast propagation for us, I was surprised to learn that we’ve begun doing more of our own propagation in-house as Rick, Stone microbiologist Eric Jorgenson andour lab crew has been getting more and more advanced equipment. 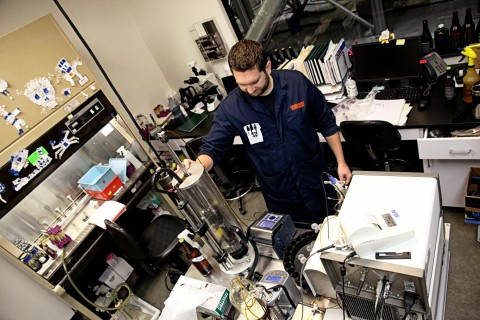 First, a small colony of yeast about the size of a pinhead (with a couple million cells in it) is scooped up with a little metal wire tool called an inoculation loop and is mixed into a flask filled with oxygenated wort. The flask is then covered and agitated for about 48 hours, at which point it’s pitched into more wort inside of a larger 15½-gallon Carlsberg flask. It will spend three days there before heading into one of our 30-barrel propagation tanks for a week. Now, the yeast has reproduced enough to give us about 100,000,000 cells in each milliliter of wort, and is ready to make glorious, glorious beer. 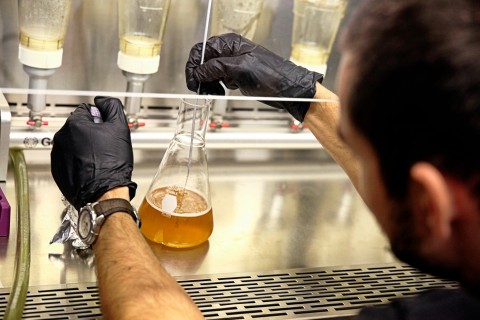 Manual agitation, it's more than what happens when one gets frustrated reading a particularly heady instructional booklet.

When asked what sets Stone’s yeast apart, Rick replied, “It’s one of the least temperamental strains I’ve ever worked with. It doesn’t like wild pH changes, but it works well with all different levels of alcohol with ease. Heck, we’ve got it so tuned in and tuned up now, it can scream through anything. It can ferment through a batch of Stone Pale Ale in just three days!” In addition to being dependably insatiable, it’s also versatile and utilized to make everything from our 4.4% ABV Stone Levitation Ale all the way up to behemoths like Stone Imperial Russian Stout and Stone Old Guardian Barley Wine that top out in the 10-11% ABV range. 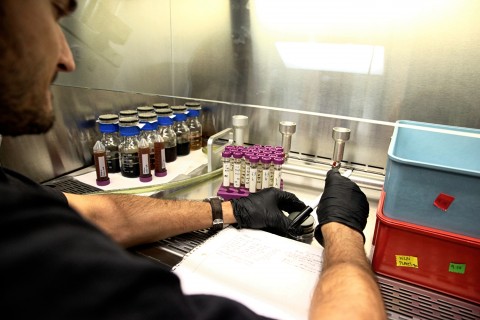 Now I had him going. What started off as prying information and tidbits from his big nerdy brain now turned into Rick spitting out factoids faster than the sun pumps out neutrinos. Rick got excited about the yeast, and thanks to his enthusiasm, I did too. Then he laid this one on me. "We like to use propidium iodide (PI) to determine our yeast viability; it's a DNA stain rather than a membrane permeate like methylene blue. PI sticks in between strands of non-replicating DNA in yeast cells and will fluoresce under the correct microscope lighting. And if the DNA isn't replicating, the PI will glow and we'll know the cell is dead." 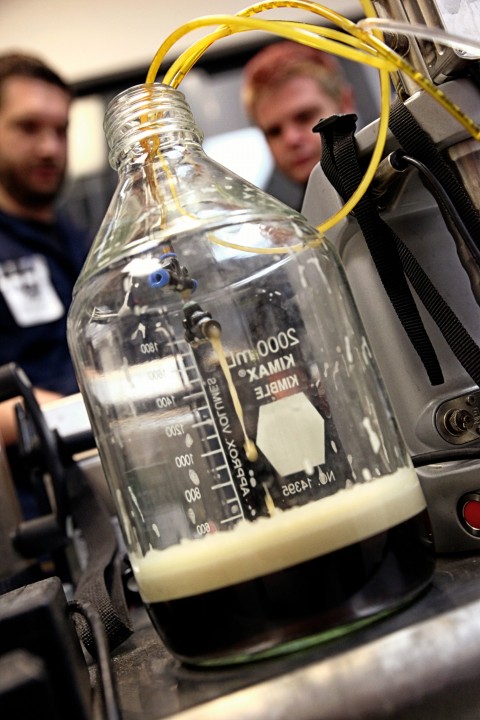 I saw Rick as a science superhero that day. Maybe it was thinking about the awesome “behind-the-scenes” show he gets to survey under the microscope slide. Or it could’ve been the awesome Arrogant Bastard Ale lab coat he had custom embroidered. Or maybe it was the way the Bunsen burner flame reflected off of his pocket protector. Whatever it was, I loved learning more about Stone’s awesome yeast strain and the people keeping it healthy so it can keep making all that aforementioned glorious, glorious beer.