On July 19, 2014, Stone CEO and Co-founder Greg Koch stood before an esteemed crowd of European friends, compatriots, media and soon-to-be-neighbors in Germany to announce that Stone Brewing Co. is coming to Berlin. The site of the announcement was the historic former gasworks that Koch and company will transform into an equal-parts traditional and modern campus including a state-of-the-art brewery, packaging hall, restaurant and gardens. The following is the speech Greg gave, which lays out Stone's reasoning, logic, plans, philosophies, passion and intentions for its new space and future in Europe... Guten abend! Es ist mir eine grosse freude sie heute abend hier zu begrüssen. As CEO and Co-founder of Stone Brewing Co., it is my sincere pleasure to welcome you. We are here today to celebrate something we are wildly enthusiastic about: fine…uncompromising…delicious…craft beer. And there’s no better way to celebrate it, than to share some with our friends…all of you. Cheers. 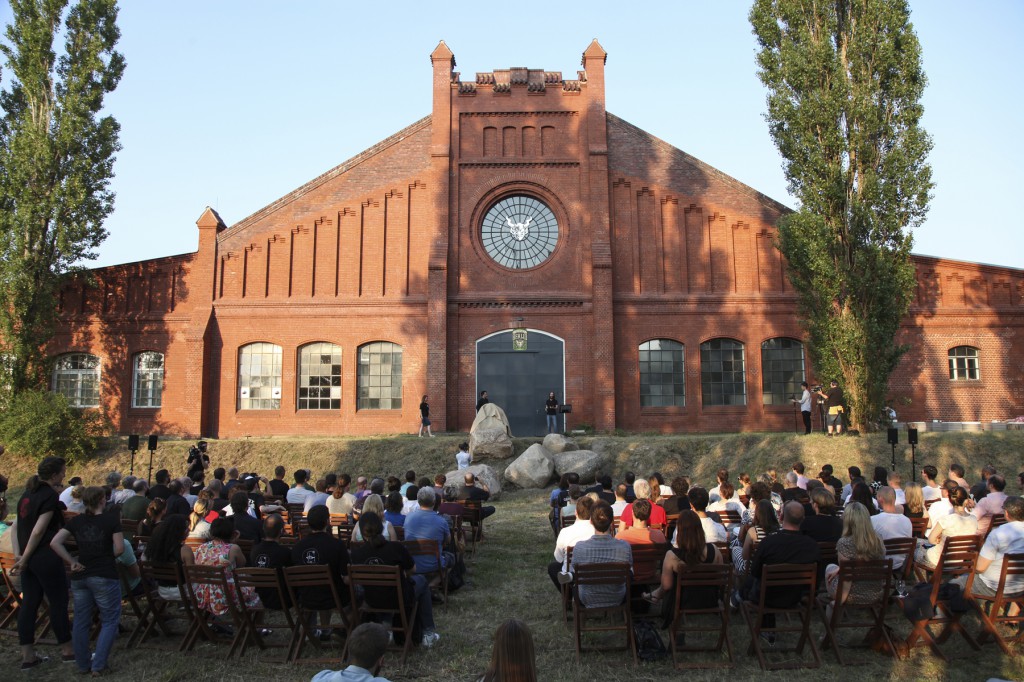 And speaking of friends, I’d like to acknowledge our friends in the craft brewing industry who have honored us with their presence today. I see craft brewers from as far as Poland, Hungary, Northern Italy, Scotland, from all over Germany and, of course, from here in Berlin. This is a historic moment for Stone. I’ve been wanting to say these next words for many years: Stone is coming to Europe. Stone is coming to Germany. And more specifically, Stone is coming to BERLIN! 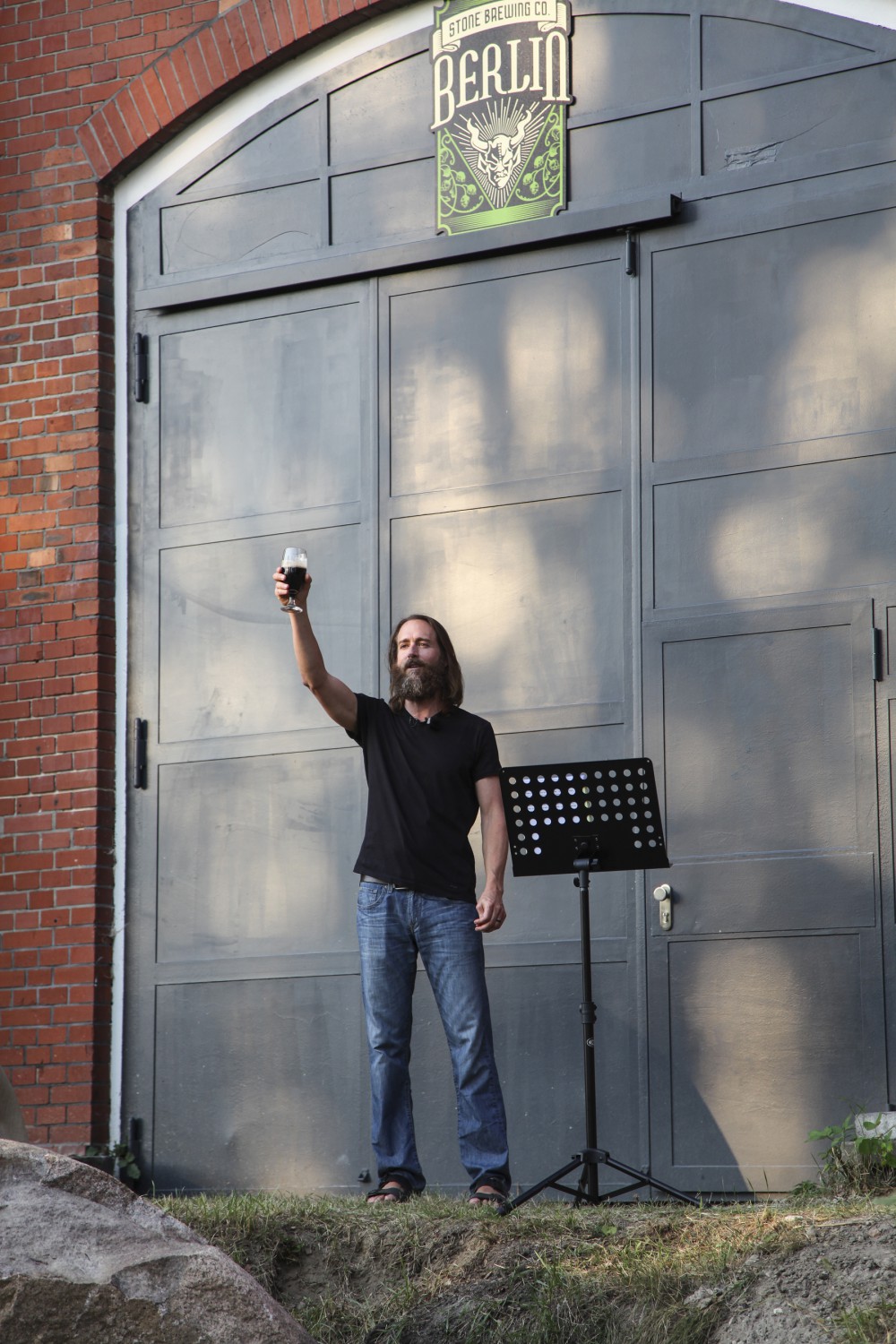 It’s been a long time coming. It was back in 2009 that we first announced our intentions to be the first American craft brewer to own and operate our own brewery in Europe. And now we’re doing it. But it’s not been without a lot of searching for just the right location. I wanted to select a spot that was in a city of historical and cultural relevance. I wanted to find a unique property with historic structures that could also offer the ability for us to grow. I also wanted a place where we could build a magnificent restaurant and gardens of natural, rustic beauty. My partner and co-founder Steve Wagner also had exacting specifications as to where we could locate, as he insisted specifically that in our search throughout Europe it be…and I quote…“Anywhere but France.” In all seriousness, though, we wouldn’t have settled for just anywhere. The search was exhaustive. We put a great deal of thought into where we wanted to be and spent an incredible amount of time traveling Europe, ultimately inspecting more than 130 sites in nine countries. In fact, a location in the spectacular Alsace region of France actually made our top-three list, so we were just kidding about the earlier comment. And all that searching has brought us to where we stand today—the capital city of Germany. Berlin is most certainly incredible. And so is this location. 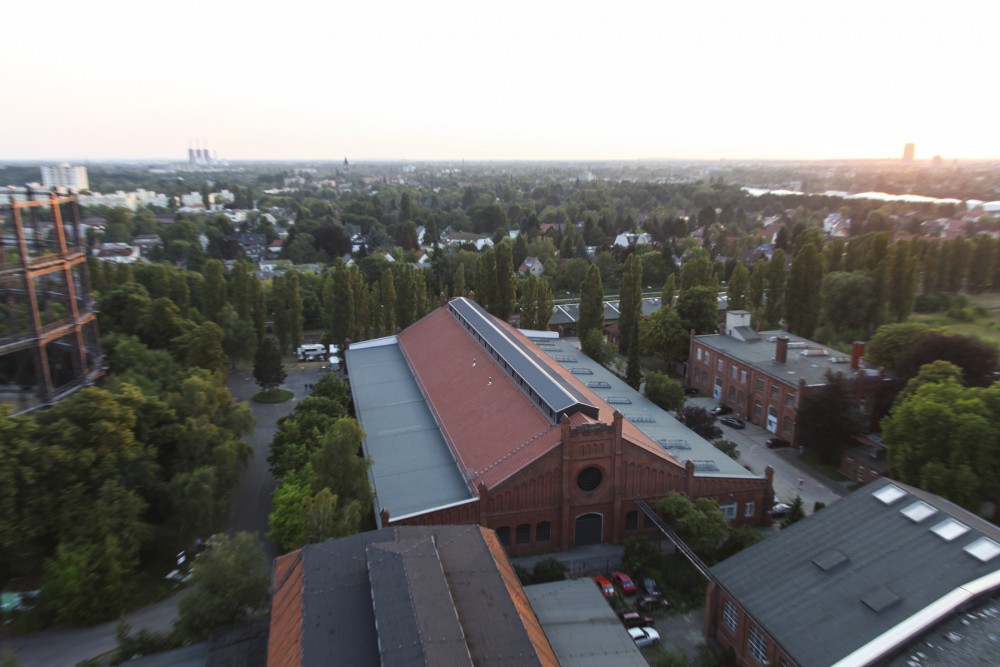 The story of this beautiful property began in 1901, and for a hundred years it was a critical part of the industrial infrastructure of the region. Now, what was once a gasworks building nearly unchanged for more than a century will be reborn, with one foot firmly in the past…a time when artisanship and craftsmanship meant something; when people didn’t just make things, they made them right; and the pride of a job well done was every bit as important as bringing home a paycheck…and one foot pointed in the direction of the future…where traditions are respected, but not blindly followed just because, “well, that’s the way we’ve always done it,” and we’re not afraid to take risks and go down new paths just because no one else thinks it’s a terribly good idea. At Stone, we never limit ourselves to what people say we’re supposed to do. Instead, we follow our muse to create things we believe are truly great. 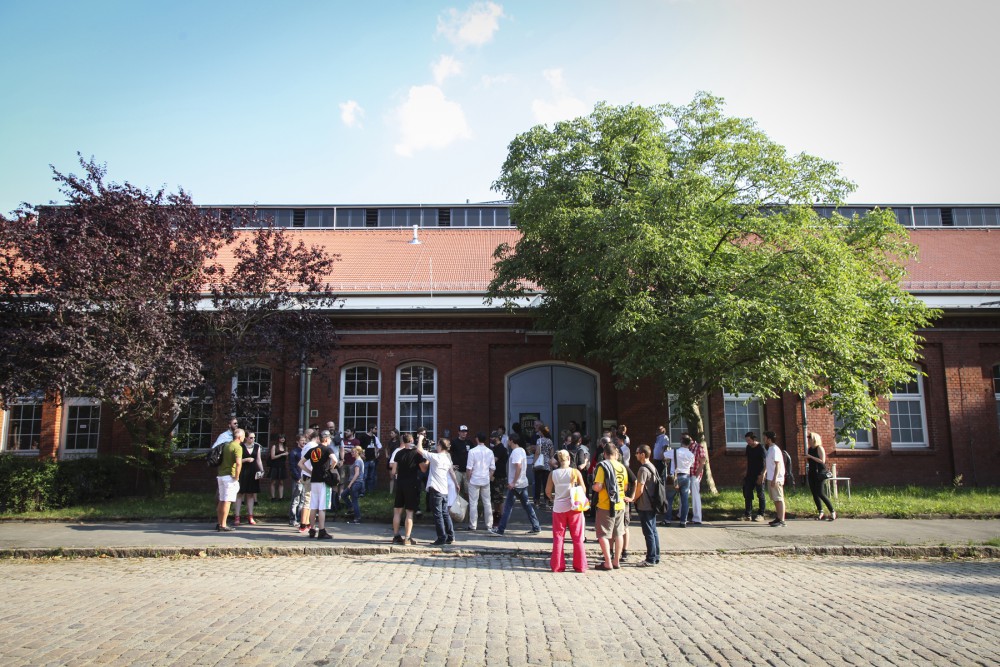 For centuries, brewing has been a noble art… an art of and for the people. Tragically, over the last several generations years, industrialization and pandering to the lowest common denominator have fueled brewing’s deterioration into a mere commodity. So much so, that most of the world no longer thinks of brewing as art. Far from it. Instead, they view it as something devoid of character to be purchased as cheaply as possible. True, there have always been and continue to be brewers who have maintained the integrity of their art over the centuries. However, their work has largely been ignored by the average beer drinker in recent decades. The masses have instead been held sway with an endless barrage of advertising schemes and degradation of the art at the hands of pricing wars and accountants. Decades of consolidation and mass-homogenization has led to a loss of understanding of beer among the populace. Just try and explain saisons, IPAs, imperial stouts, American strong ales, or Belgian lambics to the uninitiated, and it’s a nearly impossible task as the beer drinker of today has been left with little frame of reference to understand the language of craft and artisan beer. In fact, many are confused just by the two words "craft beer." I hear people speak with apparent pride about “beer purity,” without them understanding what the phrase actually means, while at the same time accepting commodity brewers’ open adulteration of their beer…apparently without even noticing the irony. If someone ever comes here and mixes our beer with sugary soft drinks, sweet lemonade or colored, flavored syrups, they will be asked to leave. If you choose to allow your beer—or your good taste as an adult—to be insulted, that is up to you. However, we will not tolerate it. I believe we have a responsibility to bring forth our best possible work at all times, and nothing less. Ever. This is the overriding ethos that guides everything Stone does as both a company and as a force for positive change. In addition to our admittedly aggressive, style-bending brewing, we are also known throughout the U.S. for railing against the industrialization of beer from something artisanal to something shallow. Over our 18 years as a brewery, we’ve built a well-earned reputation as a company with intense drive, substance and individualism. We’ll be the first to admit that we’re different. That’s always been the case…and we’re proud of it. No, not everybody understands us or appreciates our aspirations. However, we know we’re on the right track for us. And it’s that track that has led us here today—the future home of the Stone Brewing Co. and Stone Brewing World Bistro & Gardens – BERLIN! We’re sure people will laugh at us. People will say we’re crazy. Some people will even say we’re stupid…dummköpfe. I love that. Let me explain. Over the last few years, as I’ve made multiple trips to Germany looking at a variety of sites and, eventually, focusing on this one, I’d inevitably find myself in conversations with random Germans in bars over beers. At some point I’d mention what I did for a living, and they’d raise an eyebrow and ask what I was doing in Germany. Researching perhaps how to copy German beer styles to take back to the U.S.? No, I’d say, “I’m looking for a place in Europe to build a brewery and bring our styles over here.” “In Germany?” they’d ask incredulously. “Perhaps,” I’d say, “Germany is one of the countries we are considering.” The reply I’d get was almost always the same: “A brewery? In Deutchland? But you’re American.” I could see the thought behind their eyes “This guy doesn’t look that stupid, but that’s the dumbest idea I’ve ever heard.” When I’m asked, “Aren’t you afraid Europeans won’t like Stone’s style of beer?” I simply chuckle and reply in all honesty: ”That’s O.K. When we opened in 1996, Americans didn’t like our style of beer. Even people in our own hometown didn’t like it. And many still don’t today.” But times have changed, palates have evolved, and Stone has grown to be the 10th largest craft brewing company in the United States. Some people love our beer. And we love brewing it. Soon, the building in which we now stand will unfold a new chapter. You see, this isn’t about building a manufacturing plant that just happens to produce beer. This is about bringing Europe a taste of our vision for craft beer. Just as we breathe new life into this historic space, we will join the German and European craft brewers who together are breathing fresh air into this country’s, and this continent’s, storied brewing culture. As you know, a gargoyle is our emblem. It stands for our commitment to quality, character and an uncompromising approach to our craft. We respect our art, and we respect our fans. Period. Total respect, zero compromise. This is what Stone stands for. These are the simple philosophies and ideals we will bring with us across a vast ocean to implant in the soil on which we now stand. Total respect. Zero compromise. We are the Stone Brewing Co., we are proud to be your brewery. 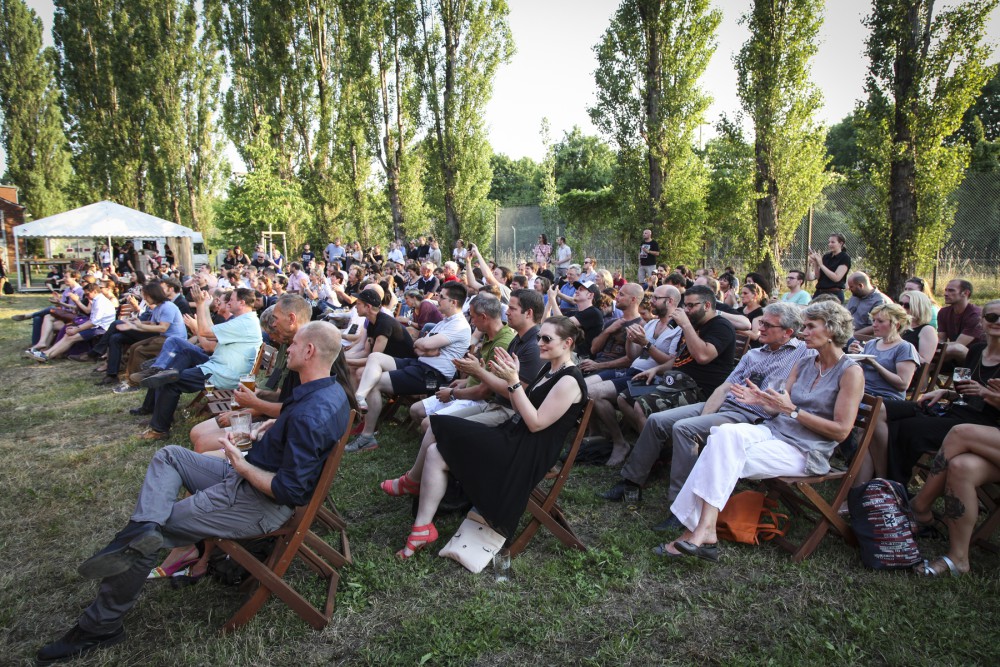 We’re lucky to be a part of an industry where our would-be rivals are actually our friends. The American craft brewing industry, nay the craft brewing industry as a whole, is largely one of compatriotism over competition. This spirit also exists here in Berlin, and as I look into the audience, I see a strong representation of Berlin’s awesome craft brewing spirit and skill. I’d actually like to invite all our craft brewer friends in attendance, including our Berlin brewers of course, to stand up here with me today in solidarity of our movement. We look forward to uniting with these leaders and other craft brewers. Together we are mighty, and we will change the course of beer in Europe for the better. And not just here. We are also looking for another site in Berlin where we can build a separate Stone Brewing TapRoom. Berlin will not be our second home, but our home. Many years ago, a famous American came to Germany and proclaimed proudly: Ich bin ein Berliner. I look forward to a day in the very near future when we at Stone will be able to proudly shout from the rooftops of our German brewery: ICH BIN EIN BERLINER BRAUER. I am a Berlin brewer! 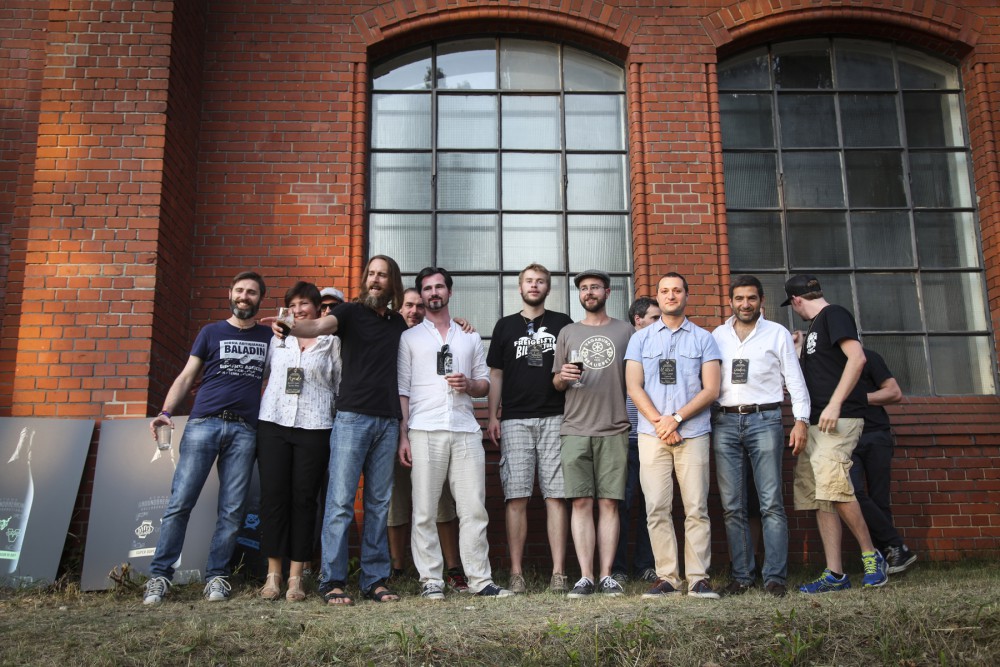 The first of many, MANY future instances of brewers coming together at Stone Brewing Co. - Berlin

Thank you to all of you for coming today. I am proud to have been able to share this momentous occasion of our announcement with you! I appreciate you all. We couldn’t have done this without your help, your inspiration and your friendship…and we’ll need that going forward. We hope to return it in kind. Now, let’s enjoy more food, music, and of course, beer! Check out some of the press clippings on our Stone Brewing Co. - Berlin project... Berliner Kurier CNBC Der Tagesspiegel FOX News USA Today U-T San Diego