The Return of Sawyer's Triple 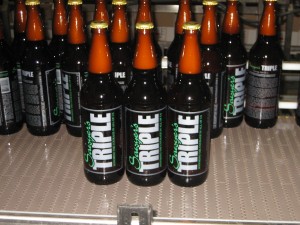 My job here at the brewery (tours, fan correspondence, special events, etc.) gives me the frequent and pleasurable opportunity to interact with our fans on a daily basis. I definitely think it’s important that people be able to connect with us on a personal level and understand, that behind all the Arrogance and bombast, we are in fact ordinary—but no less interesting and authentic—folks just like themselves. This honest and unstaged interaction makes people feel good about supporting us in what we do. And one very central part of our mission in our endeavor to make fantastic beer, one that further strengthens this relationship with our fans, is our involvement in charity work. This is, of course, no glossy public relations chore, but rather a deep abiding, heartfelt conviction that dedicating ourselves to being the best brewers we can be means also dedicating ourselves to being the best citizens we can be—and that means bettering the community in which we live in every way we can.

Occasionally, this commitment has moved us to take up important causes that directly affect many of us here at Stone on a deeply personal level.

Some of you may recall a special beer that we brewed back in 2003 under the name “Sawyer’s Triple,” a golden, Belgian style ale quite unlike anything else we’d ever done before. By all accounts it was a marvelous beer, and I often get inquiries from fans as to whether we would consider bringing it back. Well, we are indeed bringing it back, and we are doing so to further the same cause that we took up some five years ago when we originally brewed this very special beer: the fight against ALD. ALD (Adrenoleukodystrophy) is a rare and devastating neuro-degenerative disease that typically affects young boys, ultimately taking them from us before they see their twelfth birthday. You may recall this illness from the 1992 film Lorenzo’s Oil. 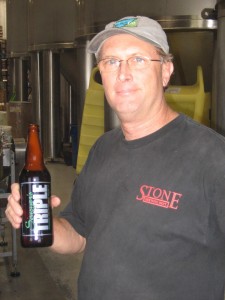 You may also recall that Sawyer’s Triple is named in honor of Sawyer Benjamin Sherwood, the son of Bill Sherwood, Stone’s facilities manager and an accomplished brewer, and his wife Janis Sherwood. Sawyer was a wonderful kid, and we are truly blessed to have had the privilege of watching him play baseball, running around the brew house while visiting his dad at work, and just being a bright, happy and energetic little boy. Bill, as a loving father and dedicated brewer, crafted Sawyer’s Triple soon after Sawyer was diagnosed with this terrible condition in the spring of 2003. The beer was to be sold specifically for the purpose of spreading an awareness of ALD and to help find and effective treatment, and eventually a cure, for this tragic affliction. 100% of the sales of this beer were donated towards the fight against ALD. 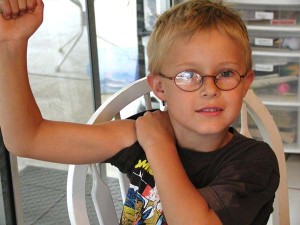 Sadly, Sawyer left us just before the initial release of Sawyer’s Triple later that year. But the cause continues, and we at Stone are just as dedicated as ever to rallying the kind and enthusiastic support from among our fans and the greater community that makes it possible to improve and save lives. Therefore, it is with no small amount of gratitude and conviction that we are pleased to announce that we are bringing back Sawyer’s Triple again for the very same noble endeavor. And I want to personally invite you to participate by spreading the word—and by picking up a bottle (or two…or three) of this ale that we have brewed on behalf of such an important cause.

Here is what you need to know:

I hope that you will join me, Team Stone, and the rest of our devoted fans in paying tribute to a noble spirit and in promoting a noble cause. Here’s to your health, generosity, and fulfillment!

this is awesome. i might make a trip down from LA just to pick some up. my thoughts are still with the sherwoods, but what a great way to continue the fight.

Sounds good but a bummer it's only at the brewery for those of us out of state. Let us know if it ever gets some distribution or you put the label on a shirt or glass or something, sounds like a good cause!

It is an absolute shame I won't be able to support the cause from up here in San Luis Obispo. Best of luck raising awareness, and offering another great beer.

For those of you that want to support the cause, please visit http://www.FightALD.org. You can make a donation on their site (under the Join The Fight link), and more importantly - read about how to detect the disease early and seek treatment.

I can remember clearly Bill telling me over lunch how Sawyer was suddenly having trouble in school and was struggling with motor skills in little league. If another friend told me that now about their son, I'd be able to make that connection. Awareness is a word thrown around often among charitable organizations, but you can see how it is key to battling ALD.

For those of you who won't be able to make it out on short notice, keep in mind that we have produced more this time around. Also, Sawyer's Triple is sure to make an appearance at our 2009 Stone Winter Storm in the last week of January (with 100% going to Fight ALD, of course).
http://www.stonebrew.com/calendar/#090125

It's my favorite beer we've brewed here, and for more reasons than one. I really appreciate the support fans have given to this cause, and got pretty choked up just answering an email a few weeks back. Thanks.

Hmmm...It will take some work to convince my wife that a road trip from Illinois is worth it for a case, but I'll give it a shot.

Is there a way to get this in NY? I love Stone beer and see this as being an awesome holiday gift for many people! Anyone willing to send a case east??

This is a great beer for a great cause from a great brewery. I bought several bottles from the original run of Sawyer's Triple when it came out. I still have one unopened bottle I keep as a reminder. I have two young boys and I can only imagine...

The picture of Sawyer reminds me so much of my own son. He does not have any of the symptoms, but I read them and will try to get everyone I know to do the same.
I am very much looking forward to this release.
Cheers guys.

ditto...if there are any t-shirts or pint glasses sold for the cause i'd be in on that. i enjoy your beers in virginia beach va. and look forward to whatever we can get out here.

Stone makes great beers and when there done for such a noble cause it makes it so much better. I can't wait to try this one.

Bill,
I'm so sorry for the loss of your son. We posted your story on our website http://www.thebeerinme.com/
and I also posted it on Topix...
http://www.topix.com/drink/beer

I will definitely be there and supporting this cause! Sorry about you loss. Prayers being sent for you and your family. Thanks for being such a huge asset for Stone and sharing your story.
Cheers!
Matt Johnson
Escondido, CA

Great Cause + Great Beer = well worth the trip. I live in NY and get to the brewery every few months. I hope there will be some left!!. Cheers

This is awesome... My wife and I just lost our first son, 3 weeks before his due date, and I was planning on brewing a beer in honor of him. This is all the motivation I needed. I'm from San Diego but now live in Indiana, and I will defiantly have a case sent to me from my family back home. You are doing a great thing, keep it up.

Its a shame that this beer will not be available all over...It would be such a great way to spread the word..Wish I could get some here in Michigan...

This beer is fantastic! I remember how it moved all Stone fans and Stone employees in its first release. Stone is great at suporting the community and charitable causes. I have managed to hold on to one bottle from the first release, waiting for a special moment to share the beer. Now I can have that FIVE year old sample without reservation, and purchase more for a great cause. Keep up the great work, and all the best to the Sherwood Family!

Amazing cause......We are heading up to the brewery tonight will definitely have a few in honor of Sawyer

I'm coming down this Sunday for a family get-together, and I've always enjoyed visiting the brewery... Long-time fan of the ABA and its rude brethren, and this is a very worthy cause! Can't wait to try it!

I haven't tried it yet but am always looking for new and exiting brews to try and share with friends.

I'll be sure to get some and share with friends.

Also, it's always great when companies support causes that help people out.

I'm already a BIG FAN of Stone Beers. After reading about Sawyer, I'm even more impressed with your company. Not only do you make wonderful beers, but it sounds like you have created a true family at your brewery. I would love to help support your cause by purchasing Sawyer's Triple. Please email me as to how I may make such a purchase. I live in Memphis, and it is soooo difficult to get a hold of your beers. Is there a way I could order your beers and have them shipped directly to my home? Thank you for making such amazing beers, and continued success in raising funds and awareness for ALD.

This is awesome !!! Good work

I just finished reading about Benjamin and the Sherwood family. My heart felt wish's go out to the Sherwood family.
To do what you are doing to raise awareness of this disease and keep up the cause can only be commended.
I love most of your Beers and can say that I like the way you do business. You seem to keep family's close to the heart. You give me hope that there are still kind hearted people out there.
Now I must get down and get a case of the Sawyer's Triple.

What a fantastic cause! I only wish I lived near Stone so I could support the effort and enjoy some of this delicious beer.

My wife and I just returned to NY after a vacation in San Diego. We made two trips up to Stone and picked up a couple of bottles of Sawyer's Triple. Fantastic brew and a wonderful cause. Wish we could have brought home a case!! Our deepest regards to the Sherwood family and prayers for a cure...

Just read Sawyer's story, my heart goes out to his family. We would like to support ALD reearch by donating 20% of the proceeds from any sale of Sawyers tumblers from this day on! The tumblers can be purchased at www.etsy.com/shop/bottlehood

I bought one of these bottles the first time I went to Stone, the fact that it was a Stone Brew and you'd almost never know it by the bottle intrigued me.

Definitely a good beer; not my favorite Stone, but pretty damn good nonetheless. I bought another bottle when I was there a few days ago and just now got around to seeing the story.

My condolences to the family and thank you to Stone's brewers for re-making it and continuing the donation.

What a great cause and what a fantastic beer. I brought two of them back to Texas with me. My only regret is that I didn't get more.