The Best Damn Black Pilsner Ever Hits Shelves on Monday

Remember way back on April 1st when we announced our next collaboration beer, BrewDog/Cambridge/Stone Juxtaposition Black Pilsner? Remember how clever you felt when you dismissed it as an obvious April Fools gag? Stone brewed a Pilsner? Yeah right. Then remember how foolish you felt when we confirmed that it was true—that it was in fact a real beer? Man (knee slap), good times. Now that the confusion and hurt feelings have subsided, all that’s left is a very real—and very good—Black Pilsner (we know, there’s no such thing, but let’s put that aside for now…or forever). We brought you the play-by-play on brew day with James Watt from BrewDog, Will Meyers from Cambridge Brewing Co., and our Head Brewer Mitch Steele, but there’s more to the story. 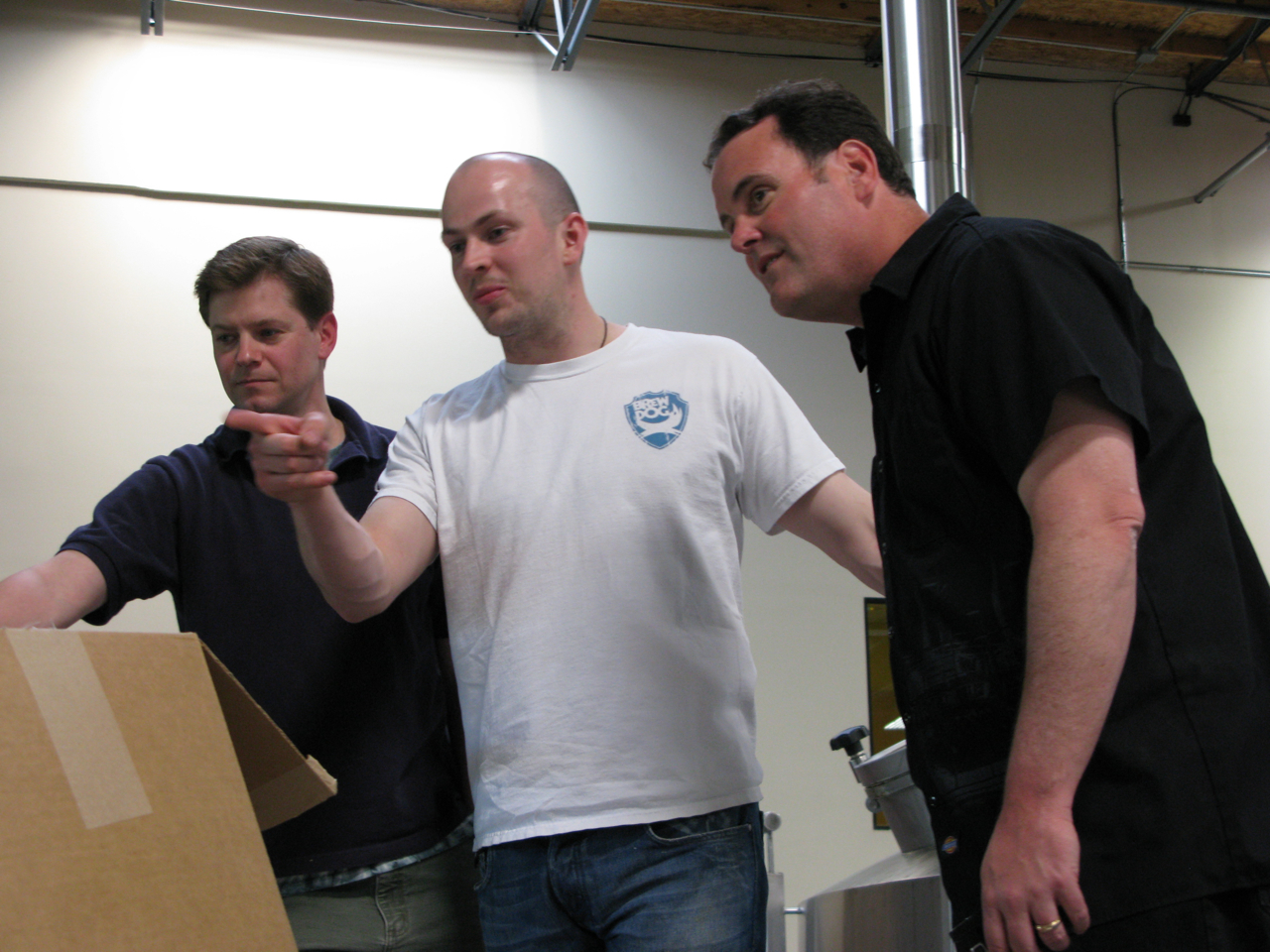 First of all, let’s tackle this whole “lagers take longer to brew” myth. SOME do. There are major brand lagers that take less time to brew than craft brewed ales. Yes, a craft brewed lager may typically take longer than a craft brewed ale. Blah, blah blah. Congrats if you’ve stayed with me this long, hell I was starting to bore myself. The bottom line is the end result. Says me. Now let’s move on. All I can say is that this beer better be better, because this lager took roughly four times longer to ferment and condition than a typical Stone beer (we also bottle-conditioned it for a few weeks, further prolonging its release). After looking back at the brew sheet, Mitch found that primary fermentation took 30 days, and aging (aka ‘lagering’) took 50 days. That’s a total of 80 days that the beer spent training to be the best damn Black Pilsner around. 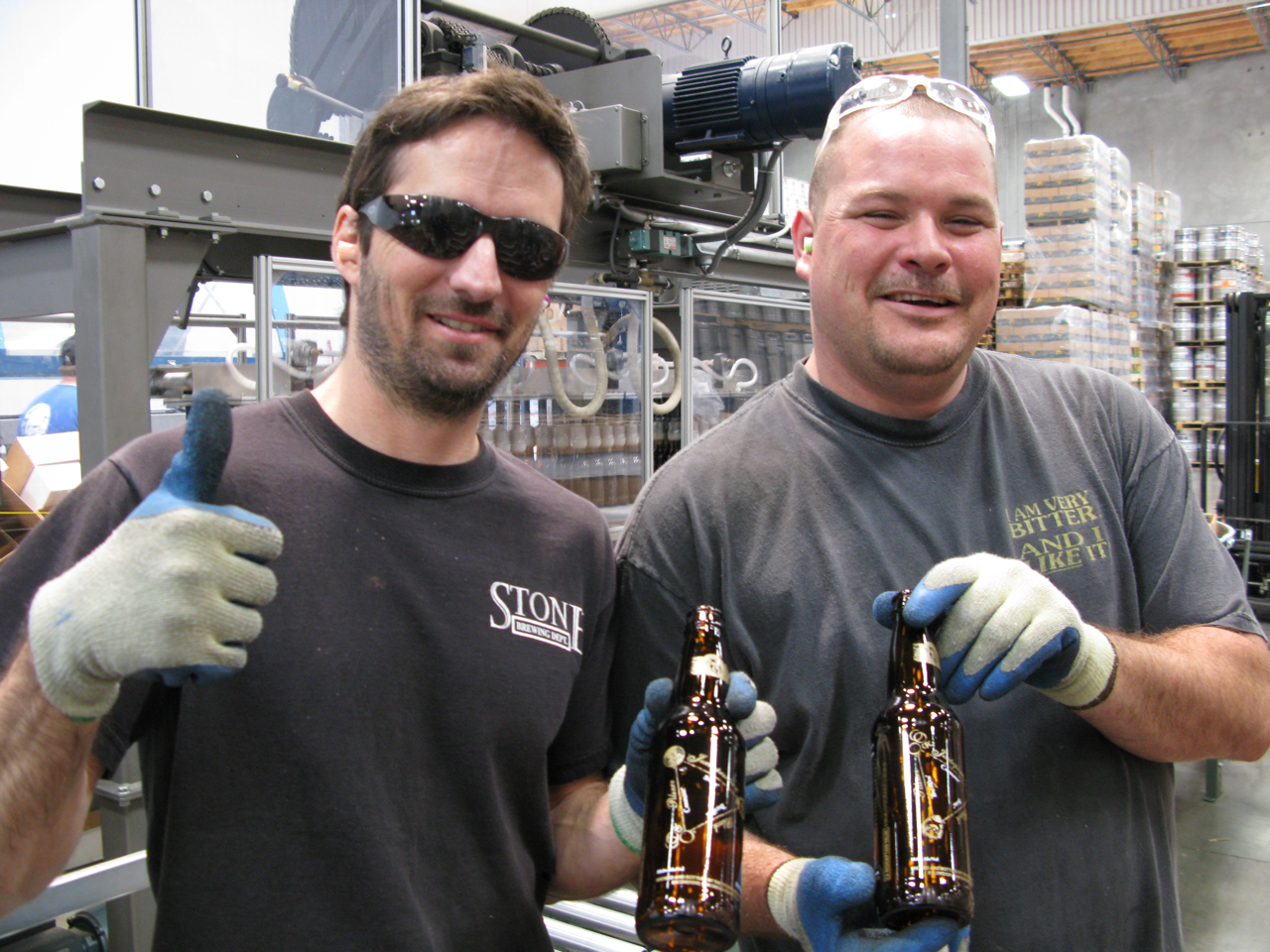 The eclectic hop bill was also a bit of a challenge to balance. From the beginning, the plan was to use 100% Saphir hops in the dry-hop because it has the most “Pilsner-like” qualities, and the Brewmasters thought it would lend the beer a nice “elegance.” However, they also realized early on that Saphir hops are fairly subtle, and they might not give the beer enough of a hop kick. Then, on June 12th, the beer gods smiled upon us. In a fortunate turn of events, James just happened to be in town from Scotland promoting his tasty beers, and he was able to stop by the brewery and corroborate with Mitch on what to do next. They tasted two versions of BrewDog/Cambridge/Stone Juxtaposition Black Pilsner, one dry-hopped with Saphir, and one double dry-hopped with Saphir and Sorachi Ace. Lo and behold, they came to a decision. “We agreed that the Sorachi Ace addition kicked the beer up a notch,” said Mitch, “right where we wanted it to be.” When Will was consulted about the extra dry-hopping, his response was: “The hoppier the better!” We knew we liked that guy for some reason. 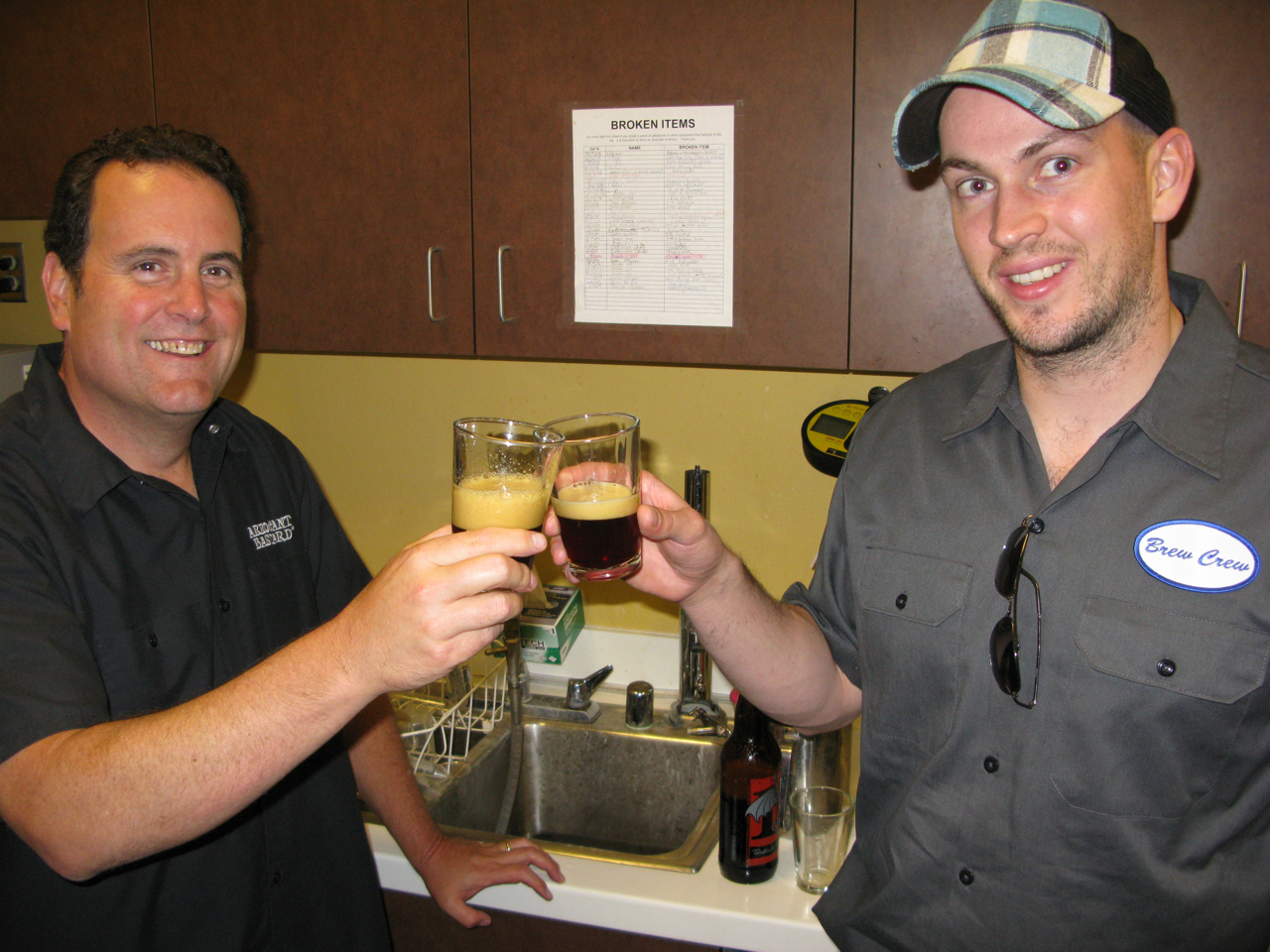 Mitch and James tasting beers when James was in town on June 12th. After tasting two versions of Juxtaposition, they decided to go ahead with a second dry-hopping with Sorachi Ace hops. They celebrated their decision by tasting Stone 13th Anniversary Ale. Rough life.

Thanks to the unparalleled artistry of these three brewmasters, BrewDog/Cambridge/Stone Juxtaposition Black Pilsner is shaping up to be one amazing Black Pilsner…err…wait….what? You still have a problem with us calling it that? Fine. It’s probably a Black Double Pilsner anyway. Feel better? Alright, let’s put this to rest. Just what the hell is a Black Pilsner, anyway? “It’s a Pilsner in the fact that we brewed it with Pilsner malt and fermented it with Pilsner yeast,” said Mitch, “but it’s bigger, darker and hoppier, and it’s unlike any beer I’ve ever had.” There you have it. Settled. 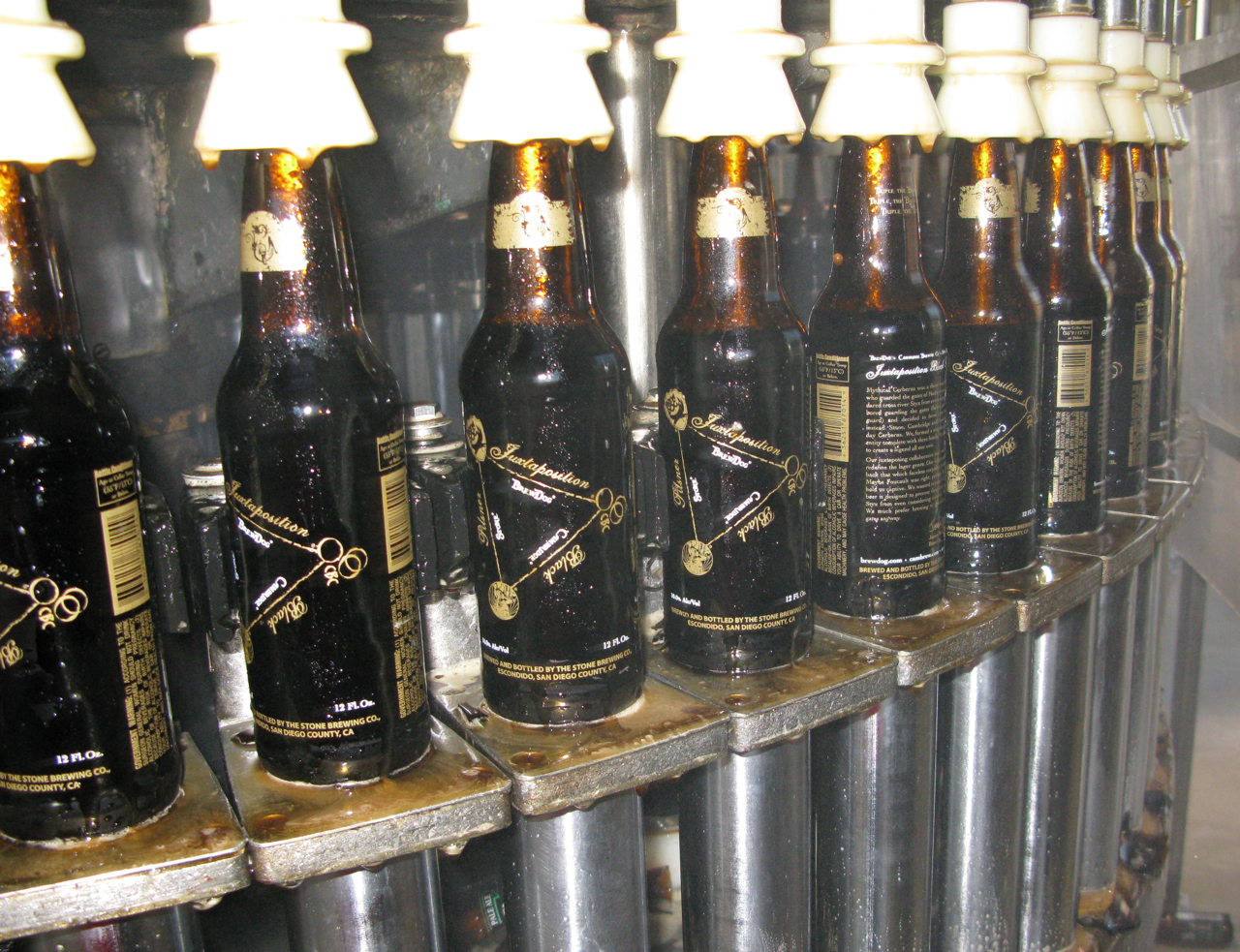 Bottles going through the filler. Look at that gold glisten...

Now for the bad news—we didn’t make a ton of this beer. In fact, the yield was so low that it’s only going to be available in a few lucky locales (see below) in VERY limited quantities, and in 12oz. bottles only (sorry to crush your hopes and dreams). So when can you get your hands on it? BrewDog/Cambridge/Stone Juxtaposition Black Pilsner will start hitting store shelves this Monday, July 27th. Prepare yourself for the best damn Black Pilsner EVER. The following places will be receiving small quantities of BrewDog/Cambridge/Stone Juxtaposition Black Pilsner in 12oz. bottles: Scotland Massachusetts Georgia Washington Oregon (Portland) Arizona N. California S. California New York Ohio Virginia Colorado Check out information on our previous collaboration beers - Matt Steele

Does "Washington" refer to the state or our fair District? Is DC gonna get some love?

Orr,
Virginia will be getting some, so there's a good chance that DC will see some love. It may take a few weeks to arrive, though. Check our VA/DC distribution page and feel free to call your local sales rep to get the official word http://sn.im/i0si6 Good luck!

Which retailers in So Cal will have it? I want to try this beer!

When you say Colorado do you really mean Colorado or do you actually mean Denver/Front Range?
Will Durango be seeing any (Ska Brewing distributes you guys out here)...?

Virginia, Ohio, New York, Massachusetts? Youse guys got something against I-95, or what?

Sorry Matt, in a bizarre coincidence, Scuttlebutt Brewing Company released a Black Pilsner on June 10th in celebration of their 13 year anniversary. It was formulated and produced without any knowledge of Stone's pending version. In another ironic twist both Stone and Scuttlebutt started production in July of 1996. Can't wait to compare the two side by side.

Sorry to disappoint those of you in areas where the beer won't be headed. If you're crafty, you just might be able to get your hands on some!

Dutch - Scotland is getting the beer because that's where BrewDog is located. It would be unthinkable not to send James some of the beer he helped brew.

Randy - We have nothing against any of the areas that we don't distribute to. It's merely a question of limitations. We wish we could distribute everywhere!

Ummm, can TX ever get some love? We don't all drink Bud you know.

Matt too - Yeah, what Will said!

I really want to try this stuff. I live in Ontario, CA and am just wondering which supplier in this area is slated to get this. Also, Will this be available at the Stone store on Monday?

Can you tell us what retailers in So. Cal. will be getting them (anything near Temecula)?

Will this be available in Seattle? If so, besides Bottleworks?

Joe - Yes, it will be available in the Stone Company Store on Monday.

Phil - It will be available in WA, but it's hard to say exactly where. Check the WA section of our distribution page for more info: http://sn.im/hyswu

Hope you guys are as excited about Monday's release as we are!

WHY couldn't you just LEAVE it LESS hoppy?!?! While I love your brewery, you don't have a single beer I can actually stand to drink!! (Except your imperial stout)

PLEASE PLEASE PLEASE!!!!! Create a rich tasty belgian and make it not so hoppy!! Pretty please?? With a cherry on top?!

"We have nothing against any of the areas that we don’t distribute to. It’s merely a question of limitations. We wish we could distribute everywhere!"

I just bought some of this from the stone store in esco...I can confirm it is like no beer I have ever had before.

Wow! Just had it last night. Drank it from a large snifter as recommended, truly unique. The taste, the experience, everything about this beer was amazing. If I could describe the flavor, I would say "Tastes like a fire toasted stroop waffle finished with bourbon."

I know Brew Dog's Tokyo is supposed to be the downfall of Western Civilization - but I feel like this beer definitely shook up middle America.

Hey! We here in New Mexico show our love to the Stone brewery so they should so some love here. We want to see what all this Juxtaposition is all about.

Not sure if my comment showed up - don't see it yet. So I'm repeating myself!
I am crying here in FL - I am a total hophead and believe no beer can ever have too much hops. Are there any mail-order sites with Juxtaposition? Or is someone willing to ship me a couple bottles? :)
One day I plan to make the pilgrimage to Stone - you all are my favorite brewery!

Jenn,
Thanks for the kind words! Below is a list of a few fine establishments that ship craft beer to most states. We can't promise that they'll have Juxtaposition, but it's worth a shot. Keep in mind that many states prohibit the shipping of beer from out of state, and as such, are typically not on the “eligibility list” for many of these shippers. State laws are complex and change frequently, so some may ship where others will not and vice versa. Good luck!

Matt, thanks for the info. Unfortunately I just learned that FL sucks and it's illegal for any retailer to ship beer to us :(
So I have to find a friend to do it!

my grandpa has a private wine cellar where he keeps a lot of those vintage wines-,: