HOPPY 13th Anniversary To Us...

With all the latest beer gossip just a click away, it’s near impossible to keep a secret these days. Many of you may have heard rumors about Stone 13th Anniversary Ale, but it’s time we set the record straight. Here’s the official word: Take your idea of a hoppy Stone beer and throw it out the window, because Stone 13th Anniversary Ale is the hoppiest beer we’ve ever brewed. Just how much hops is in this year’s batch? You may want to sit down for this…4.5 lbs. PER BARREL! To lend you a bit of perspective, Stone 10th Anniversary IPA, revered by many as the quintessential hopped-up Stone Anniversary Ale, had about 2.5 lbs. per barrel.

Stone 13th Anniversary Ale has officially trumped our collaboration brew, BrewDog / Cambridge / Stone Juxtaposition Black Pilsner, as our hoppiest beer. Of course, all those hops would be worthless if the beer wasn’t balanced. That’s where brewers Mitch Steele, Tom Garcia, and John Egan came in. When Steve and Greg gave the green light, Mitch, Tom, and John took the reins of the recipe. The beer went through three iterations before they dialed it in, finally deciding on Chinook hops for bittering and a 50/50 blend of Centennial and Simcoe hops for dry hopping. The careful blend of hops, combined with pale malt, various crystal malts, amber malts, and just a touch of chocolate malt, resulted in a rather tasty 7% abv red ale—but it just wasn’t quite worthy of a Stone Anniversary Ale yet. “It had a nice hop character,” said Mitch, “but it didn’t have that extra something that I thought the beer needed.” After tasting it, Greg even asked Mitch “It’s going to be bigger, right?” To which Mitch replied “Yeah, it’s going to be bigger.” The solution was to bump up the hopping and alcohol a bit, and the result was a very big, very Stone 9.5% abv Ale. As if that wasn’t enough, the brew crew decided to dry-hop it again just prior to filtering and packaging. 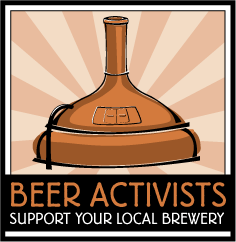 When asked to describe Stone 13th Anniversary Ale in one word, guess which word Mitch chose? You guessed it--“Hoppy.” Sure, it’s a monstrously hopped, extremely bitter beer, but it also has a bold malty character that balances out the bitterness. “It’s really bitter, but it’s also malty,” said Mitch. “It’s pretty well balanced; not as dry as you’d think.” Dr. Bill agreed with Mitch when he tasted it. “It’s really well balanced for as hoppy as it is,” said Dr. Bill. “And it has a nice malt complexity with hops throughout.” Mitch knows that hop-heads who missed hops in last year’s Stone Anniversary Ale will rejoice, not only because Stone 13th Anniversary Ale is a hop monster, but because it’s damn good. “I think it’s going to be right up there with some of the older Anniversary IPA’s,” he said, “and if all goes well, right up there with the Tenth.” We’ll let you decide when Stone 13th Anniversary Ale is released on June 29th. -Matt Steele

Wow! Sounds very interesting. Always love the creative brews you guys come up with and it's nice to hear the story behind the beer as well. Thanks for sharing. SOOOOO excited for this to come out.

Oh
My
GOODNESS!
I simply can't wait to taste this bad boy! I have to wait a month and a week, huh? THAT totally sucks. I guess I can wait since I just sampled the Cali-Belgique yesterday (tasting notes to come early next week on the blog), and I have an Imperial Russian Stout chilling in the fridge... I guess I'll just have to make 'em last.

Congrats!! Can't wait to taste lucky number 13! I have had the privilege to get my hands on all 12 previous, and while the SUBLIMELY SELF RIGHTEOUS version is my current pick to date, a Stone Red sounds out of this world. My calendar is marker for the 29th, happy B-Day STONE!

Cool. Red it is! Yeah it was leaked that it was red, and I saw the label on the COLA. But you dropped the H-bomb (that's the hop equiv to the F-bomb) when you said it was double-dry hopped then bottled. That was not leaked. That is awesome. Plus the red label is bitchen. See you at the 13th Anniv Party!

Excellent news, but don't get it twisted, 12th Anniversary was great.

OMG I want to cry. This is the most beautiful thing I've ever seen. If such laws of physics existed I would marry you Stone Brewery! God ol' mighty I love life!! Don't hate dude above me.

Make sure the folks up at Brea Bev Mo get enough of this. I think they only had some ridiculous amount of the Sublimely Self-Righteous Ale (which was fantastic by the way). Loved the 11th Anniv India Black Ale. Gonna book mark the 29th in my Outlook cal. Dude can't wait!

This sounds like an ale that we have come to love and expect from Stone. Looking forward to it's release!

We appreciate Stone quality here in Dixie and look forward with great anticipation to the imminent arrival of the Thirteenth Anniversary Ale. Bring it on!

I just picked up a case today (on my lunch break). I can't wait to try this tonight!! I will be clock watching until 5pm!

Any idea if the Bev Mo in La Quinta will be getting this? I'm afraid they won't. They don't know if they will, and worry they may not.

Does it make any difference if I say I heard from my friend who works there that Greg's brother (or at least some guy who said he was) came in the other day and bought some Arrogant Bastard Ale?

I found out my favorite shop near me put this on the shelves today. Coincidentally, I got the e-mail at the same time my boss said to leave early. I felt almost selfish buying a case, so I mixed a case with this and Self-Righteous. I'm holding onto this stuff. I wish I didn't go through my Cali-Belgiques so quickly... I'll be enjoying this for a while I'm sure.

Just bought 8 cases and it came in today! Hoppy 4th of July to me...and Happy 13th to all at Stone Brewing. Keep the brews flowing. Cheers!

Had the 13th. Really good, will drink it as long as I can find it, however (isn't there always a however?) the 11th is still the best...

So, I tried the 13th...Wow! Cheers to all you stoners and to another great anniversary ale.

Damn! Can you guys keep making excellent beers or what? Just bought and opened my first bottle of the 13th, was going to share with my wife but decided to be greedy so she will have to wait for the second bottle while drinking my honey basil ale. Thanks! Now... if I can just figure out how to clone this to brew and have all the time...

So I moved to Colorado from Seattle about 2 1/2 months ago now and have been searching for a good beer since i've been here. I found it! The only problem is... it's a California brew, and it's seasonal.

Still though, thanks for renewing my faith in beer.

My friend is a stone believer and IPA expert introduced me to this curious and hoppy brew. Fantastic! I hope you make it all the time. Cheers!!

Unreal..this thing has some serious bite, but the malt complexity is so sturdy it begs to be drank. Wonderful ale guys, Keep making great beer as you grow bigger pleeeaaassee! Ya'll Rock! cheers from Delaware.

This brew is "ausgiseichnicht". I heard about the anniversary release in mid July. Visited the usual North County haunts (BevMo, Henry's and Poway Liquor) to no avail, I was too late!! Had to stop by the brewery the day I got ack from vacation (Yosemite). On tap only that day so I bought my first growler. Thi bigger one - is there any other way people??! Let me tell you. I picked a good time in my beer drinking career to sample this quaff. A few years ago I needed a pale ale or two before I coule handle the hoppiness of IPA. More recently IPA and other mid-strong tastes are my happy place. Now I need one or twoof those before I can take on the imperial stouts and the like. Anyway, the reds are close to IPA in strength, and this Belgian/Red/double dry hop brew is too tasty. I did read on the side of the growler that it should be consumed within 24hrs. Is that within 24hrs of purchase or 24hrs of opening??? I think the former. So I am feeling gut. Thanks again Stone. Awaiting a refill with next (and last?!) version of vertical epic. ki

My wife and I tried the 13th anniversary brew at The French Laundry in Fenton, Michigan, a little over a week ago. It was an honor to be able to get one of the few bottles that made it into our state.

What can I say? Awesome. Drop-dead delicious!! We ordered short ribs with a sun-dried tomatoe sauce. Wow!!! This was the first Stone brew we tried and I cannot wait to go out and try more.

For those of you who make it to Michigan, you need to stop by The Laundry, as we call it. Fenton is south of Flint and sports great food and an even greater offering of beer. Lots of Belgian styles to be had, including some from Stone.

I just had one the other day and can only describe it with one word "WOW" I would have to rate this as one of my top three beers of all time. Just a perfect balance of hops and malt.......
I had a local Double IPA last night, and all I could think about was the 13th Anniversary Ale. This beer will make it hard to drink any other high gravity, hoppy beer....

I guess that's how they keep us customers.....

Still have 10 bottles in my fridge. Bought out the last 16 bottles at my local liquor store last October. Opening one or two bottles per month or on special occasions. 13th one of my favorites from Stone.