Monday marks the 2010 release of one of our biggest, boldest beers: Stone Old Guardian Barley Wine. While the exact recipe for Stone Old Guardian is tweaked every year to fine-tune the flavor of this mammoth mother of a beer, the changes this year are a bit more substantial. Have no fear, zealous Stone Old Guardian devotees, 2010 Stone Old Guardian is still the beer you know and love. But we like to keep things interesting—especially for those who like to hang onto beers and conduct vertical tastings down the road—so we’ve thrown a couple of compelling new ingredients into this year’s batch. Mitch and the Brewing Team experimented with a new type of crystal malt made from a variety of British barley called Maris Otter. They were so pleased with the pilot batches made with Maris Otter crystal malt, that they decided to use it in the release version, giving the beer a slightly maltier, nuttier flavor (once again, no reason to fear: with 90 IBUs, it’s still menacingly hoppy.) 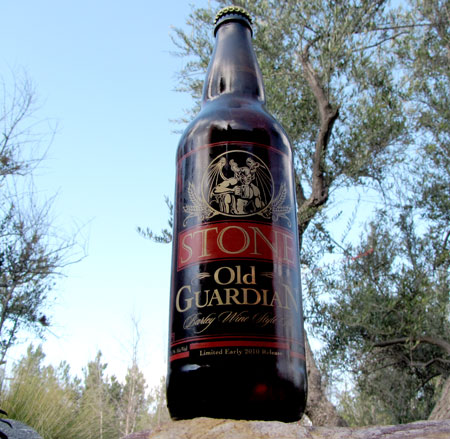 To go along with the new malt, Mitch decided to dry hop it with East Kent Golding hops, another traditional British brewing ingredient that wowed the Brewing Team in the trial stages.  I can attest that it does in fact smell like unicorn tears, as scandalous internet rumors have suggested. So while these changes may push 2010 Stone Old Guardian in a somewhat more continental Anglophilic direction, it’s still every bit the brash, lusty American Barleywine of years past. In fact, we like to think the spirit of adventure exhibited by this year’s version is part of what makes it so frickin’ sweet. Speaking of adventure, 2010 Stone Old Guardian is on tap at the Bistro this week for 2010 Stone Winter Storm, so if you get here before Saturday, you’ll get a chance to try it before the general release.

Hey, I love your beer. The only problem is I am from the Imperial Valley (El Centro) and you guys don't have any of your flavor filled beers any where in sight. Is there any way you guys could find someone to distribute down here. If you can't find anybody, I would be willing to do it for you guys.

Thanks for pointing that out Jeff! Note the correction above.

I just tried my first Old Guardian two days ago, I was impressed. Well done guys. I have a new brew to add to my top ten list.