StoneWall Ale: A Flavor Riot for a Good Cause

If you’ve been paying close attention to the beer line-up for the upcoming bonanza that is 2010 Stone Winter Storm, you may have spotted StoneWall Ale on the list—a sighting so rare, some might call it the Jackalope of the craft beer world. But what is StoneWall Ale, you mumble feebly, humiliated by your ignorance of this arcane bit of Stone history? Were you truly a Level-7 Beer Geek, you’d know that it’s the strongest beer Stone has ever brewed, a 12.2% American Barley Wine that tastes like it was milked from a dragon’s udder…if that dragon ate nothing but malt, hops, hop extract, and Belgian candi sugar…and then let the mix ferment inside its fiery gut almost 4 years ago. 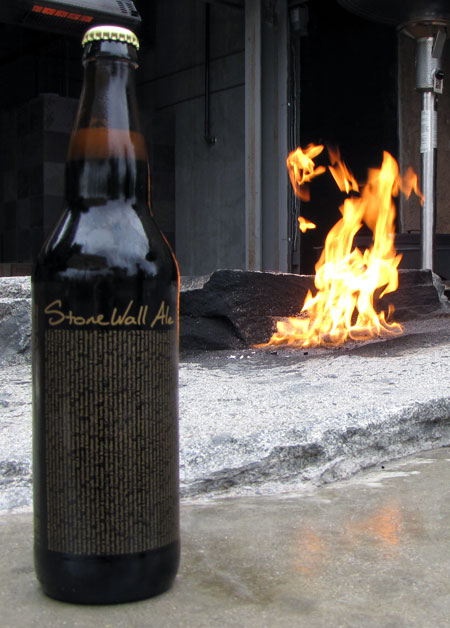 OK, maybe that’s a bit of a stretch, but the beer is indeed incredible and very hard to come by. Ironically, that’s only the second coolest thing about it. The coolest thing is that it was part of a charity fundraiser we held that raised over $85,000 for local charities.

It worked like this: way back in 2005 when we were building our brewery and gardens in Escondido, we asked our fans to sponsor stones in the wall that connects the inside of our brewery to the patio and bar outside. 472 people stepped up and put their stones in the wall, and aside from the knowledge that they were supporting important local charities, they received bottles of the specially-brewed StoneWall Ale, the bottles of which bore the names of the generous donors.

That was the one and only time we brewed the mythic StoneWall Ale, but we stashed some in our archives to break out on special occasions, like Winter Storm. In keeping with the spirit in which it was brewed, 100% of the proceeds still go to charity. So go ahead and drink this sweet nectar, knowing that you’re lending a hand while carving yet another notch in your beer geek belt.

I live in Kansas City, so either Kansas or Missouri will work, but you need to start distributing here soon because I, and my friends, are getting VERY thirsty!!

Perhaps the more famous Stonewall (although I am sure the beer is tasty):
The Stonewall riots were a series of spontaneous, violent demonstrations against a police raid that took place in the early morning hours of June 28, 1969, at the Stonewall Inn, in the Greenwich Village neighborhood of New York City. They are frequently cited as the first instance in American history when people in the homosexual community fought back against a government-sponsored system that persecuted sexual minorities, and they have become the defining event that marked the start of the gay rights movement in the United States and around the world.

. . . and then there's Stonewall Jackson, to whom the name stuck after Rbt. E. Lee's admiring remark.

I could have sworn it came in at 12.2% ABV... but that doesn't even compare to the magical super secret stash that was aged in a bourbon barrel for two years (which came in at roughly 17.8% ABV).

I love my job.
CHEERS!

OH..forgot to mention in the excitement...My family is a member of the Stonewall Club...and proud of it!!