You know what the problem is with you young punk craft beer drinkers today? You don't know how good you've got it! Double IPAs everywhere, flowing like water! Heck, when I was your age, I had to trek over 100 miles uphill in the snow to get something even remotely hoppy! Oh, gosh, who am I kidding? I'm only 27. The fact is, *I* am a young punk, reveling in the bounty of lupulin-loaded libations at my fingertips. But thinking back, it's crazy to see how far my tastes have come. And I know for a fact I'm not the only one who can say that. I remember tasting my first Stone IPA years ago... and absolutely hating it.  (Sorry Greg. Sorry Steve. I was young and naïve!) It was so much more bitter than anything I'd ever had, and I was sure that I was not, and would never be, a hophead. But I remember telling a friend about my less-than-stellar experience, and he immediately replied, "Oh, you should try Ruination! It's their Double IPA!" Wait a tick; if their straight IPA was way too bitter for me, why in the hell would I want to try their Double IPA?! But my friend persisted, twisted my arm, held a gun to my head, and somehow got me to try a sip. And then... a HOPIPHANY. 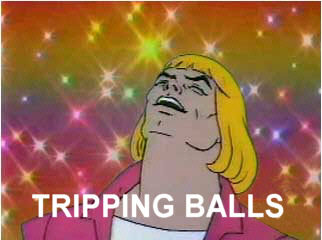 Holy bitter breakthrough, Batman! What was this beautiful, citrusy magic I was tasting?! My eyes were opened. My worldview changed. I had seen the glory of the almighty hop, and it was good. I laugh now to think there was a time when I didn't think I liked hops, but it's true. (My tastes have obviously adapted wildly since.) But it's even weirder to think that there was a period of time when beers like that weren't even around. The fact is, Double IPAs, in all their splendor, were barely existent a decade ago. There were indeed a handful out there—Rogue I²PA and Blind Pig 1st Anniversary IPA to name a few—but they were few and far between. And as Stone's 2nd through 5th Anniversary Ales got increasingly hoppier (we're now time traveling through 1998-2001), Greg and Steve could no longer let a whole year go by without getting a renewed fix for their hop obsession. By essentially blending these delectable anniversary recipes together, thus was born Stone Ruination IPA, the first full-time brewed and bottled double IPA on the planet. As in, available 365 days a year. Fast forwarding a decade to the here and now. The craft beer world, and craft beer drinkers, have come a looooong way. Double/Imperial IPA was the the fifth most-entered category at the 2011 Great American Beer Festival (with 102 entries) and the second most-entered category at the 2012 World Beer Cup (with 93 entries)! And as Stone Ruination IPA turns 10, we thought we'd make ourselves a nice little birthday present to celebrate. But what kind of selfish jerks would we be if we didn't share?! Behold, the Stone Ruination Tenth Anniversary IPA. (Clever name, eh? That's why us folks in the Marketing Dept. get the big bucks!) It's an amped-up version of Stone Ruination IPA, with a bit more malt to bring the abv up from 7.7% to 10.8%, and a very heavy dose of hops. "Classic" Ruination uses 2.5 pounds of hops per barrel--which is more than double the amount we use in any other of our core beers--but for Stone Ruination Tenth Anniversary IPA, we went double again, using an impressive 5 pounds of hops per barrel, including about a pound each of Citra and Centennial in the dry hop. (Hell. Yes.) 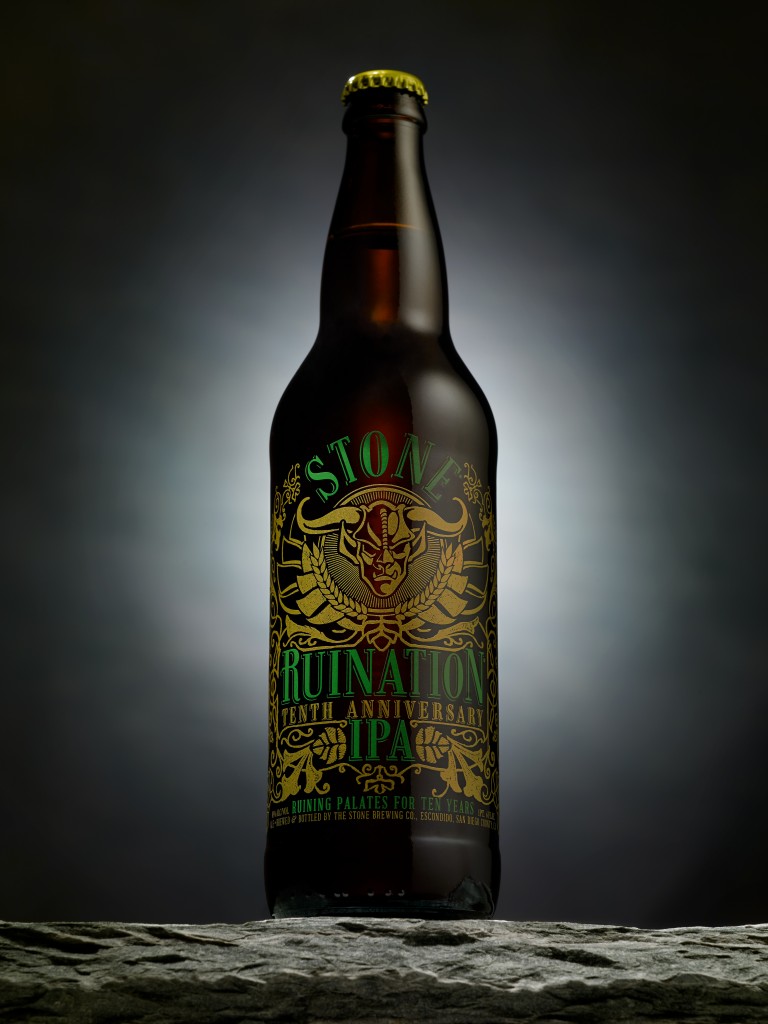 Go ahead. Tell us this isn't beautiful. (Glorious photo by StudioSchulz.com)

It really is a glorious time to be a hophead, no matter how long you've been in the game. Here's the breakdown on this wonderful new beer and the fantastico launch event we've got planned for it. Cheers to you, to us, to craft beer drinkers everywhere, and to Stone Ruination IPA turning the big 1-0. Stone Ruination Tenth Anniversary IPA Stats: 10.8% abv, 110 IBUs Availability: Limited 22oz bottles & draft. One-time release, beginning June 11th Distribution: AZ, CA, CO, CT, DE, FL, GA, ID, IL, IN, KY, LA, MA, MD, ME, MI, MN, MO, MT, NC, NJ, NM, NV, NY, OH, OR, PA, RI, SC, TN, TX, VA, VT, WA Malt bill: Crystal 15, Pale Malt Hops bill: Columbus and Centennial. Dry hopped with Citra and Centennial. San Diego Launch Event Stone Ruination Tenth Anniversary IPA Party at Henry's Pub Sunday, June 10, 5-10pm | 618 5th Ave, San Diego We return to the first SD bar to ever pour Stone Ruination IPA, throwing an awesome birthday celebration filled with brews, food, music, and a lot more! On deck are guest appearances by Stone CEO & Co-Founder Greg Koch and Brewmaster Mitch Steele, five taps with special versions of Stone IPA and Stone Ruination IPA, food pairings with dishes created just for this momentous occasion, plus limited-run Stone Ruination Tenth Anniversary IPA glasses and T-shirts on sale. Full details. Tasting Notes, provided by Brewmaster Mitch Steele Appearance: Deep gold with an off-white creamy head of foam. Aroma: Intense, dank and fruity hop notes. Lemon oil infused with nectarine, pineapple and tropical fruit, with hints of mint and spice. Taste: An abundance of tropical fruity hop flavors upfront, and carrying throughout the palate. A pleasant maltiness balances the hops about mid-palate. Finishes with a long, lingering clean bitterness. Palate: Full bodied but dry, with an alcohol fullness and sweetness. Very bitter! Overall: In our Brewers’ Tasting Panel, we all get excited every time we sample one of our new beers for the first time. When we absolutely nail a beer, and get exactly what we were hoping for on the first swing, we call it a homerun. This morning’s (hey, we're professionals!) taste panel was definitely a homerun. Or, as Brewing Supervisor Mike Richmond commented, “this one has got the love.” We brewed this beer using the same ingredients as in our classic Stone Ruination IPA, but bumped up the malt to achieve its elevated 10.8% abv. And of course we jacked up the hops as well.  Not just in the boil, but we doubled the dry-hop amount, using a 50/50 blend of Centennial and Citra. The combination is, dare I say, magic. Suggested Pairings, provided by "Dr." Bill Sysak Appetizers: Kimchee, ceviche, bacon-wrapped jalapeños (or habaneros) Entrées: Salt and pepper shrimp, jambalaya, roasted pork chops with apple sauce, pineapple curry Desserts: Apple pie with caramel sauce, toffee bars, spiced carrot cake Cheeses: Aged Cheddar, Parmigiano-Reggiano, Roquefort, Mimolette Cigars: Ashton Classic Majesty, Litto Gomez Diez, Don Pepin Garcia Blue Label Invictos Corojo Robusto

Any chance this is coming to the UK?

Love the anniversary beer. just wish there was a way to buyin bulk at a good price. cone on stone throw me a bone....... thanks r.taylor murrieta,ca