We at Stone count ourselves lucky to have so many fans of what we do and the beers we create. Most of those who’ve tagged along as we forge through this hop-studded journey have taken fandom to new heights. That level of devotion is something we don’t take lightly and work to reward by coming up with new beer recipes and getting those brews into our staunch supporters’ hands and pint glasses.

As devotees keeping a watchful eye on us will attest, 2013 was a big year for new Stone brews. But even our most keyed-in fans were probably unaware of just how big. We say this, because after examining 12 months’ worth of brewing schedules, even our jaws dropped to the floor when we discovered that we had delivered 74 new beers outside our not-so-standard standard-issue brews this year. So, join us, won’t you, as we revisit them and other notable Stone happenings from the year that was. 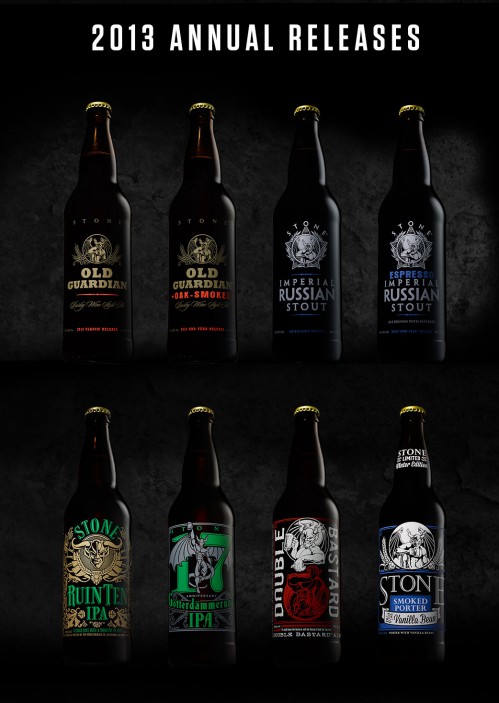 First, let’s look at our annual releases—the beers our fans look forward to each year. Those include Stone Old Guardian Barley Wine and Stone Imperial Russian Stout, two versions of which were brewed this year as part of our Odd Beers for Odd Years initiative. Stone Old Guardian Barley Wine received an infusion of German wheat malt that had been smoked over smoldering oak while Stone Imperial Russian Stout was given enough caffeine to keep it up no matter how long fans decide to lay it down, courtesy of espresso beans from our North San Diego County neighbors at Ryan Bros. Coffee.

We also brought back the beer formerly known as Stone Ruination Tenth Anniversary IPA, brandishing it with the nickname it was given by many members of Team Stone—Stone RuinTen IPA. But that wasn’t the only re-issue. We also unleashed Double Bastard Ale upon a mostly un-Worthy world in November and gifted said biosphere with Stone Smoked Porter w/Vanilla Bean earlier this month. And, in August, as we do each year, we developed a new beer to celebrate our anniversary. The big one-seven was christened with Stone 17th Anniversary Götterdämmerung IPA, a massive double India pale ale given fruity character and bitterness from a mix of traditional and experimental German hops. 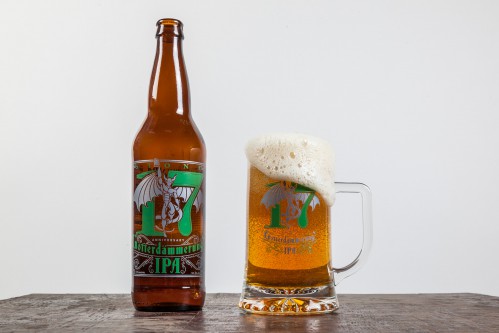 And, as has become our tradition, we invited a plethora of conspirators to join us in our brewhouse to conjure up a quartet of collaboration beers. That group was more diverse than ever before, ranging from groundbreaking brewers and online celebrities to homebrewers and our own CEO. First up was arguably our most well-received beer of the year, Aleman/Two Brothers/Stone DayMan Coffee IPA, a recipe that won a homebrewing contest in Chicago and went on to win the hearts of beer fans who found a new favorite in a high-alcohol IPA infused with lightly roasted yet very present java.

Stone Co-founder Greg Koch helped pick the winner of that competition, so he had a hand in the beer, but he put all of himself—along with his moniker and two of his friends—into Drew Curtis/Wil Wheaton/Greg Koch Stone Farking Wheaton w00tstout, an imperial stout brewed with rye, wheat and pecans, then partially aged in bourbon-soaked oak barrels and blended back into itself. Come to think of it, GK was pretty involved with our third collab of the year, as well. He and a team of Stone brewers and beer experts selected a tropical wonder as the winner of an AHA-sanctioned homebrewing competition at Stone Brewing World Bistro & Gardens – Escondido, and the result was Robert Masterson & Ryan Reschan/Rip Current/Stone R&R Coconut IPA. Last but in no way least, came 10 Barrel/Bluejacket/Stone Suede Imperial Porter, which saw Brewmaster Mitch Steele produce a farm-to-brewery beer made with avocado honey, jasmine and calendula flowers—much of which came from our own Stone Farms—with 10 Barrel Brewing Company’s Tonya Cornett and Megan Parisi, the brewing veteran behind Washington, DC’s new brewery-restaurant, Bluejacket. 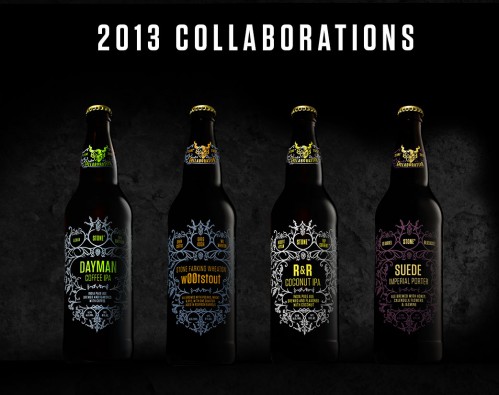 Now, some will argue our computed total when they see we’re including the 10 iterations of Stone Enjoy By IPA that we lovingly and painstakingly produced over the past 12 months (though nobody will argue how freakin’ great they tasted). We’ll give the snarky nay-sayers something to neigh about, while providing some other specialties nowhere near worthy of an asterisk. The first of those is Stone Reason Be Damned Belgian Style Abbey Ale aged in Red Wine Barrels, which was a bit of a departure from our typical brewing style in that, A) it’s a Belgian beer style, and B) it was aged in oak but released on draft instead of in our fancy 500-millilitre Quingenti Millilitre bottles. 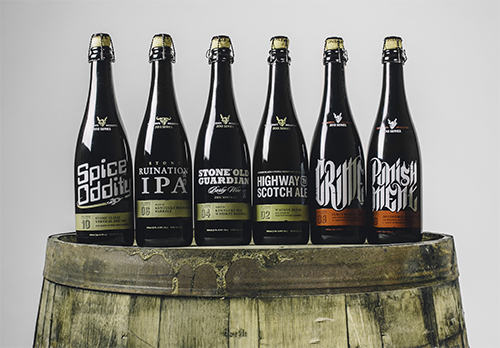 And then there were the aforementioned Quingenti Millilitre beers, an assortment of old and new beers given immense character by the transformative powers of liquor-soaked oak…and, in some cases, over-the-top if not downright insane dosages of some of the world’s hottest chile peppers. We released ten in all, three of which hail from the Arrogant Bastard Ale family. Oh, and then there were the five new volumes of our Stone Mixtape Ale series, which blends new and barrel-aged beers together to create something out of the ordinary and, often, extraordinary. And don’t forget the 31 brand-new beers brewed at the also brand-new Stone Brewing World Bistro & Gardens – Liberty Station.

Liberty Station Brewing Manager Kris Ketcham and a rotating staff of standout Stone brewers that included Steele, Jeremy Moynier, Rick Blankemeier, Brian Gallagher and our dearly departed brother Matt Courtright, made the most of that venue’s 10-barrel brewing system, crafting everything from English-style session beers to Belgian-inspired brews and hybrids of multiple styles. We can only scratch our heads in amazement over how many ales Ketcham and company brewed up, and wonder how many they’d have cranked out if given a full year versus the mere eight months since the brewery was constructed and rendered operative. Guess we’ll find out in 2014! 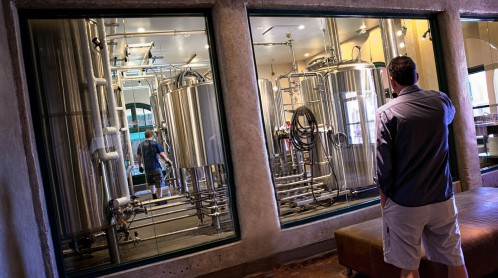 So, just to recap, here are 74 beers outside our core line-up that made it to thirsty Stone fans in 2013… 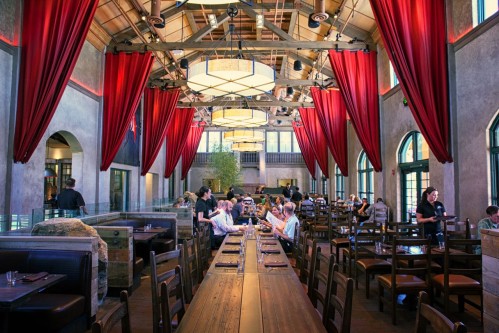 While these figures are downright staggering, we can’t rest our recap of the year that was by only going through the beers we brewed. Especially not in a year that saw the opening of so many different Stone venues and facilities. We’ve already made mention of Stone Brewing World Bistro & Gardens – Liberty Station, but what we didn’t tell you is that it is the largest restaurant in all of San Diego County. But what is square footage if you don’t do something good with it?

To ensure we didn’t create a waste of space, we installed multiple bars, that small-but-formidable brewhouse, bocce ball courts, a lawn for lounging and summer movie-viewing, a Stone Company Store selling merchandise and growler fills, and gardens equipped with sustainable plant life, water and fire features. Before being open even half a year, it garnered the Peoples’ Choice Award in San Diego’s annual Orchids & Onions competition (duplicating a feat achieved by its Escondido predecessor). So, yeah, we’re pretty happy with how the place turned out, and are reinvigorated every day when we see new people discover and enjoy it. Hopefully, if you aren’t already, you’ll be among those to savor a beer and some farm-to-table cuisine within its friendly environs. 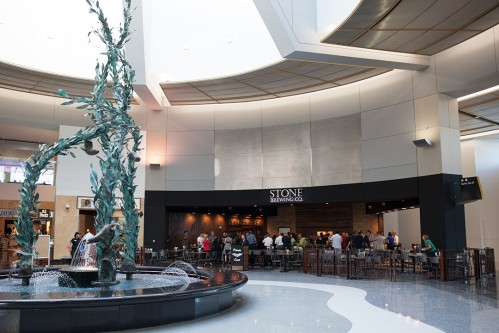 And, a short distance away, we installed a smaller, but just as soulful Bistro-esque bar and restaurant in the newly revamped section of Terminal 2 at San Diego International Airport. Not only can visitors enjoy a fine San Diego craft beer before or after their flight, they can also purchase bottles of Stone beer to go. The skies have surely never seemed quite as friendly as they do with the addition of this airport amenity. 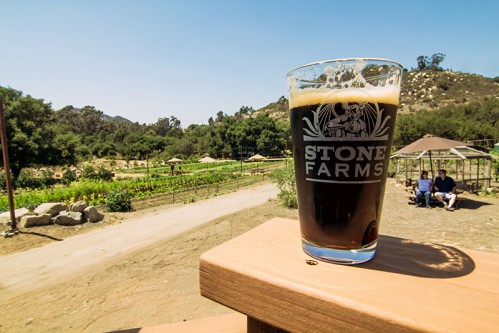 Back in North County, we finished construction of our massive Stone Packaging Hall, allowing much more space for our bottling line and quality assurance personnel to work with, and giving us a place we can grow into over the next year or two—something we sorely needed (thanks to all of you)! We also upped our beer-aging program at our barrel warehouse and began opening up the previously mentioned Stone Farms to fans on the weekends. It’s the perfect place to sit back and mellow out, thanks in part to a tasting room offering growler fills of Stone beers, including a weekly archive or one-off worth going full-on rural for. 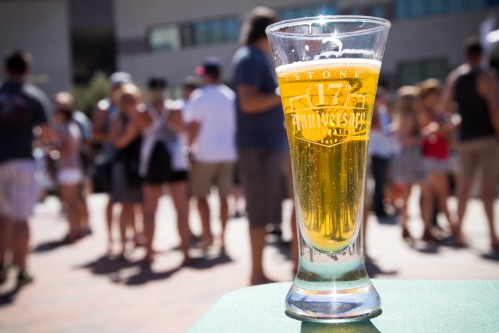 But 2013 wasn’t all about us—thankfully. We’re proud to say that, through our efforts and the support of our fans, we were able to do a number of good things for a plethora of non-profit organizations and charitable causes near and dear to us. Our biggest influx of donation funds came from the sellout crowds of beer enthusiasts who attended the Stone 17th Anniversary Celebration & Invitational Beer Festival, 100% of the proceeds from which brought in $250,000 that we promptly handed over to the Boys & Girls Club of San Marcos, Fight ALS, Palomar Family YMCA, Surfrider Foundation and California State University San Marcos Foundation. In all, Stone contributed over $600,000 to our neighbors in need, as well as numerous pints of blood donated through multiple drives for the San Diego Blood Bank, and Thanksgiving dinners cooked up by our Catering Department and delivered to friends in need. And that doesn’t even touch on the efforts of our previously bearded Greg Koch. In support of the international men’s health campaign, Movember, he rallied friends and fans to donate funds to have him shave off his prominent, two-year-old beard. In the process, he became the second-biggest individual Movember fund-raiser of the year with nearly $28,000 earned. Not too shabby—even if that beard was. So there it is, 74 beers and so much more. To say the least, we are extremely proud of our accomplishments, but we are also hungry to eclipse these numbers and continue our quest to bring quality craft beer to imbibers everywhere while raising awareness of and excitement for craft beer around the world. Thank you for your part in helping us achieve our goals, and for making 2013 such a memorable year for all of us here at Stone!