At Stone, it’s common to see lengthy beer monikers as long and winding as the 17-year road that’s taken us from the little industrial suite beer-makers that could (though many, back then, didn’t share such an encouraging opinion of our start-up) to the tenth largest craft brewing company in the United States of Ale-merica. We revel in challenging the number of alpha-numeric characters and volume of verbiage a brown glass receptacle can hold. Heck, if we hadn’t switched to 22-ounce bombers for our annual collaboration series, our Drew Curtis/Wil Wheaton/Greg Koch Stone Farking Wheaton w00tstout Ale Brewed with Pecans, Wheat & Rye with One Quarter Aged in Bourbon Barrels might have incited bouts of stress-induced agony among our Art Department savants. To give them a break, we honed in on a much shorter name for this year’s anniversary beer, but fear not, though briefer, it will still provide the fun type of challenge fans have come to expect. Our vehicle for accomplishing that in five words or less—sprechen die Deutsch. Try pronouncing this one—Stone 17th Anniversary Götterdämmerung IPA—then watch our beer video and feel a whole lot better about your linguistic capabilities as you watch Stone Brewmaster Mitch Steele stumble his way through five syllables of German diaeresis-bred intricacy.

We could go on and on, explaining the genesis of this most interesting spin on an India pale ale, outlining in a combination of enlightening beer-geek speak and witticism that this is an IPA built a la the pilsner style, then fermented with ale yeast and mega-hopped per the West Coast tradition we helped to inspire 17 years ago (and continue to define with our other whole cone- and pellet-loving contemporaries). But frankly, after getting your head and your vocal cords around a name like Stone 17th Anniversary Götterdämmerung IPA, we feel like you’ve been through enough. Instead, we invite you to check out the illustrative text pulled from the back of the bottle that will hold this scrumptious, extremely flavorful celebratory beverage. Take it away, co-founders…

Life is never dull at Stone, but the last year has been one of the most eventful yet. We threw open the doors to Stone Brewing World Bistro & Gardens – Liberty Station, our second decidedly eclectic brewery restaurant, installed in historic former Naval Training Center buildings (including their original mess hall). We outfitted it with a 10-barrel brewhouse, 40 taps serving Stone and guest beers, a huge outdoor garden area, and 650-plus seats. Hey, “small” is for other people. Well, come to think of it, we do have our own version of “small” in our brand-new-as-of-August craft beer-centric Stone bar and eatery in Terminal 2 of San Diego International Airport. At any rate, plan your trip accordingly. And we doubled the size and production capacity of our brewery, built the new Stone Packaging Hall and, oh yeah, found out we’re now the 10th largest craft brewing company in the country. We can hardly believe we fit that all into one paragraph, much less 12 months. Through all that growth, like hop bines rooted in fertile soil (see what we did there?), we kept our feet securely planted on terra firma, remembering that it’s all about the beer—we’d be nothing without it. And so, as we prepare to celebrate 17 years of straining the seams of the ale envelope, we again focus squarely on beer via our annual anniversary offering, while at the same time laying to waste long-held concepts of what German hops can and cannot do, as well as what the world has come to know about San Diego IPAs—thanks much in part to our family of beers.

Inspired by new experimental German hops, our brewing team is celebrating our 17ten Jahrestag by taking palates on an unconventional tour of Deutschland by way of Southern California. In doing so, we used a grain bill comprised exclusively of pilsner malts and German hops with crazy awesome names: Herkules, Hersbrucker, Magnum, Merkur, Opal, Smaragd & Strisselspalt. Dry-hopping with Sterling, a U.S. hop with Saaz parentage, lends a bit of familiarity, but be forewarned, this is a unique beer that takes the IPA—a style we’ve already pushed far beyond its previous limits over the years—to interesting new territory. Schumpeter chose economics; we chose beer. Our creative destruction has been aimed squarely at the previously-held-dear conventions of what beer can and should be. Stone 17th Anniversary Götterdämmerung IPA is the latest in a long line of innovations, but nowhere near the last. Not by a long shot. 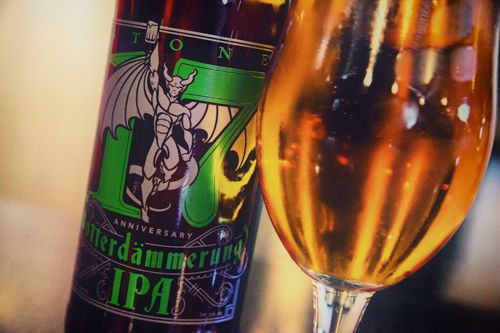 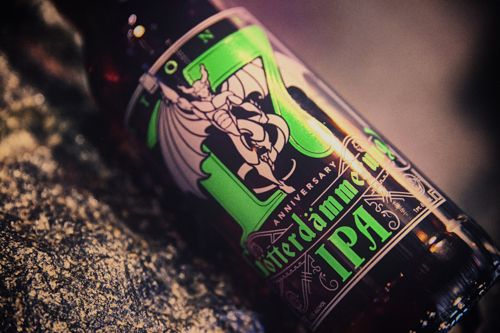 Appearance: Pours deep gold and brilliantly crystal clear with an off-white colored head.
Aroma: Focused on hoppy, with herbal and stone fruit hop aromatics.
Taste: European hops—herbal, floral, spicy, peppery and resiny, balanced by very clean, intensely bitter, beautiful subtle malt flavors, and just a hint of alcohol.
Palate: Crisp and bitter. A very refreshing beer; well suited for the summer!
Overall: A very fun beer for us to brew. Through a series of intense dry-hopping trials that we have been running over the past couple of years, we found several newer German hop varieties that we thought were unique and different from the citrusy American hops and fruity New Zealand hops that we have been using so much of this year. An interesting twist on a Double IPA (a German IPA, perhaps?), brewed with malts and hops traditionally used to brew German lagers and European pilsners. Some of the hops we included in this recipe include Strisselspalt, which has long been one of my favorite noble hops, with a delicate floral character and hints of citrus; Sterling, a U.S.-bred hop with Saaz heritage, and a hop we haven’t used much before, but we just love the intense resiny and spicy pure hop flavor; Herkules, a newer high-alpha German hop variety with intense stone fruit and tropical fruit characteristics; and Hersbrucker, a classic German aroma hop with intense floral and stone fruit flavors. 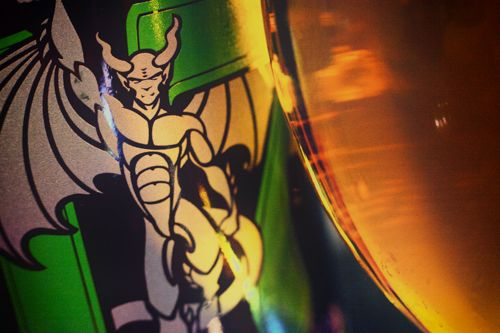