While we hold true to time-honored traditional brewing processes, we’re anything but conformists. Ours is a brewery where, rather than blindly adhering to methods and styles simply because “that’s the way it’s been done for hundreds of years,” we make a practice of regularly taking a step back, clearing our minds of all we know and contemplating simple but essential queries like “why not?” and “what if?” Our beers are founded on the logic gained from centuries’ worth of brewmasters who mashed in ahead of us, but their true flavor and character is a result of our inquisitive, experimental nature. A poignant example of this is presented in our Belgian-style India pale ale, Stone Cali-Belgique IPA.

In 2008, as we readied ourselves to create the seventh beer in our Vertical Epic series, Stone 08.08.08 Vertical Epic Ale, we took one of those famous steps back and thought about the way we culture our yeast. Up to that point, any time we brewed a Belgian-style beer, we would culture our Belgian yeast strain in Stone Pale Ale wort. For Stone 08.08.08 Vertical Epic Ale, we were aiming to brew our own version of hoppy Belgian beers like those our brewing masterminds, Co-founder and original Brewmaster Steve Wagner and current Brewmaster Mitch Steele, had tasted during an excursion to Belgium. They envisioned a light-colored beer and were concerned that Stone Pale Ale, with its rich copper hue, would be too dark to produce the results they were looking for. So, they asked themselves, “what if we culture the yeast using Stone IPA?” and promptly replied, “why not?” 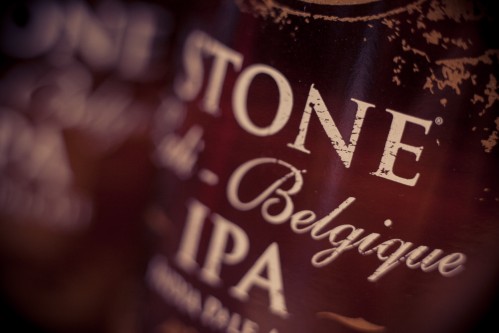 After taking the yeast we needed for Stone 08.08.08 Vertical Epic Ale, we tasted the newly Belgo-fied Stone IPA and were happily surprised by the amazing flavor brought on by the fruity yeast-borne esters. We know in that moment that we needed to brew it on a larger scale and make it a part of our year-round lineup. But not before we took yet another step back and considered how we could tweak the beer to make it as good as it could possibly be. The answer, Steele concluded, was to dry-hop the beer with Chinook hops. Stone IPA is hopped with Centennial hops, making this yet another departure, but one that made perfect sense for this beer. 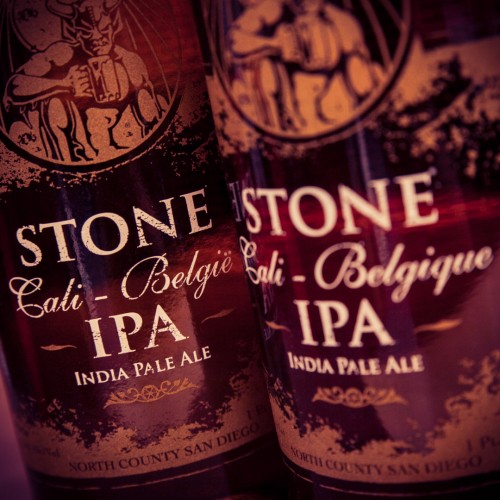 The Belgian Dutch and Belgian French spellings of Stone Cali-Belgique IPA (or Stone Calie België, if you prefer) can be found on bottles of this beer across the country

The result was Stone Cali-Belgique IPA, a beer that, when introduced, was ahead of its time. Come to think of it, a West Coast IPA brewed with Belgian yeast still sounds pretty avant-garde even in today’s free-wheeling, anything-goes craft brewing industry. We love the added fruit and spice complexity layered onto our aggressively hoppy, crisp and refreshing IPA canvas, and look to this brew as a reference point every time we look at our beers and brewing operations and beg the questions “what if?” and “why not?”

I purchased the IPA sampler. It included Ruination, Pataskala, Delicous, and Cali-Belgique. Taste certainly is a personal issue and the Cali-Belgique has 282K likes, but I must say I am not part of that herd. However, the Ruination is very good and the Pataskala is a beer I will enjoy again. Kudos, a really hoppy red of pure pleasure. If at all possible please replace the Cali-Belgique in the case IPA sampler cause I can't drink another one. Peace Erwin