This time of year, the last thing most of us want to hear is the acronym IRS. But, believe it or not, as the Internal Revenue Service’s April 15 draws nigh each year, thousands of beer fans begin emphatically chanting: I-R-S! I-R-S! Granted, most of this chanting occurs via keystrokes on social media, but make no mistake, many an American anticipates mid-April and the annual arrival of IRS. No, not the pencil-pushing bureaucrats from Washington. We’re talking about our IRS—Stone Imperial Russian Stout!

Considered one of the foremost examples of this Old World style available in the American craft beer market, Stone Imperial Russian Stout is thick, rich and complex. Nearly jet black with a fluffy hot chocolate-colored head, a goblet held to the sky could block out the sun. This obsidian wonder is also adept at eclipsing palates, smothering taste buds with a sensory overload of flavors. Dark chocolate and heavy roast come on strong up front and are granted graceful support by nuances of toast, anise, juniper berry, pepper, sassafras, molasses and more. It’s a symphony in a glass, where every member of the troupe is properly tuned to produce one outstanding symbiotic performance. 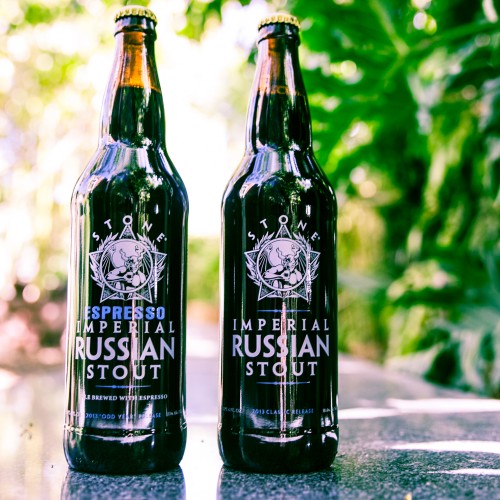 We’ve been producing IRS since 2000. The recipe is timeless, yet, being the never-satisfied, forward-thinking-to-the-point-of-dreaming craftspeople we are, we can’t simply rest on our laurels and just stick with the tried-and-true. In 2011, we instituted our “Odd Beers For Odd Years” program wherein, in odd-numbered years, we produce two versions of two of our special release beers, Stone Old Guardian Barley Wine and Stone Imperial Russian Stout—the original plus a reimagined, more out-there alternative version. It’s 2013, so fans of IRS can expect to see two versions of the beer on shelves. This year’s “Odd” version isn’t really all that outlandish. In fact, it’s more a no-brainer than anything else. Brewed with espresso procured from our North County San Diego neighbors at Ryan Bros. Coffee, 2013 Stone ESPRESSO Imperial Russian Stout bursts with intense added roastiness that serves to magnify underlying flavors. Think of it as an amplifier for all of those symphony instruments. 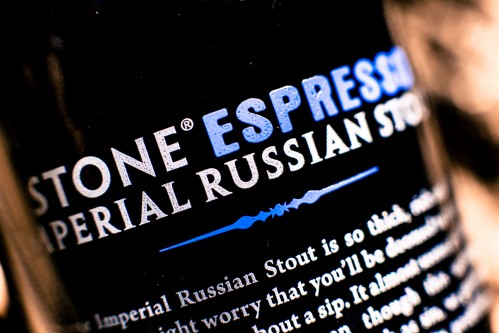 You’ll want to stockpile multiple bottles of both versions of 2013 Stone Imperial Russian Stout, one for cracking immediately—as always, while young and intense, it’s perfectly drinkable right now—and several to lay down and open years from now. We’re still sampling bottles from the first vintage of IRS and finding they hold up and continue to transform with age. Take your tax return and invest in something that will certainly appreciate and be appreciated over time! 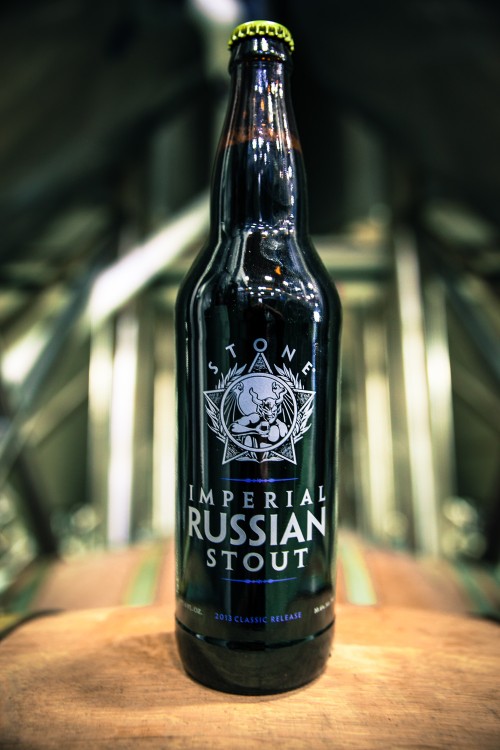 Appearance: Beer pours black with a deep tan head.
Aroma: Cocoa and coffee flavors dominate, along with some fruity fermentation esters, floral hops and yeasty breadiness.
Taste: Bittersweet cocoa and coffee flavors are the major players, along with fruitiness, hints of anise and yeast, followed by a smooth, balanced, slightly astringent, bitter finish.
Palate: Full-bodied and smooth with a hint of alcohol heat.
Overall: We didn’t change this recipe much from the original version that Steve Wagner designed in 2000. It’s a fantastic recipe and we enjoy brewing it every year.

Tasting Notes, provided by Brewmaster Mitch Steele:
Appearance: Beer pours black with a deep tan head.
Aroma: Strong yet nicely balanced coffee and chocolate flavors. The addition of espresso beans in the brewhouse and post fermentation enhances the coffee flavors that are naturally found in the classic version, but also enhance the perception of chocolate. The fruity, yeasty and hoppy flavors found in the classic version are more diminished.
Taste: Deep, rich, fruity coffee and mocha flavors intertwined with subtle vanilla and a fruity finish.
Palate: Very full-bodied and smooth with a hint of alcohol heat.
Overall: Espresso -roast coffee has thousands of aromatic and flavor compounds. A lot of what comes out in the final flavor depends on where the beans are grown as well as and how they are roasted and blended. We fell in love with San Diego’s Ryan Bros. Coffee espresso when we first tried it in a cask of Stone Sublimely Self-Righteous Ale, and later brewing macchiatos and lattes during our weekly “Espresso Friday” sessions. It’s a blend of Indonesian, and Central and South American coffee beans, roasted and blended together to perfection. The flavor is bold and robust yet very smooth, with hints of citrus and berries, and we knew it would be a great addition to this year’s “odd” version of our Stone Imperial Russian Stout.