In the craft beer universe, there are companies like The Lost Abbey and Cascade Brewing that are considered the masters of blending barrel-aged beers. Count us among the masses who bow to such expert operations for their abilities in this specialty area. Though not widely known throughout beerophile circles, the brew crew at Stone has dabbled in the blending arena over the past half-decade, so we know how much skill it takes to develop oaken masterpieces versus unpalatable wood beer soup. What’s that? You are among the many unaware of our blending forays? Well, let’s change that immediately. Allow us to introduce you to the Stone Mixtape Ale series. 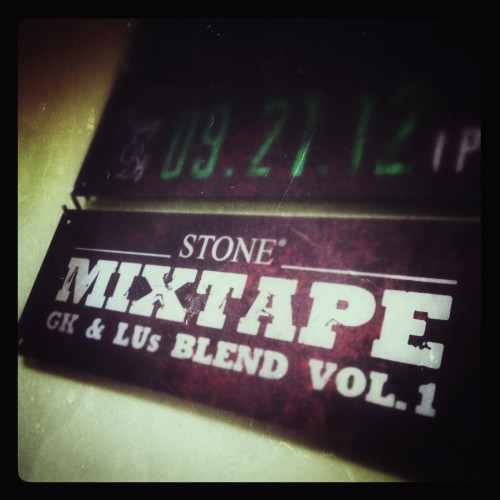 Several years ago, our CEO and Co-founder Greg Koch developed a special one-off blend stretching across ten years of Stone Imperial Russian Stout with the addition of chipotle and sage which he dubbed “GK’s Madman Mix.” It was glorious. So glorious, in fact, it prompted GK to want to drive this further.

“I’d long been very ‘anti-blending’ at Stone, but then I asked myself exactly why that was the case. Interestingly, I found most of my thoughts on the subject were founded in unsupportable bias (“It’s not what the brewer intended!”), traditionalism (“It’s not what the brewer intended!”), and dogma (“You’re not supposed to because, well…you’re just not!”). All of which, when put under the scrutiny of self-examination, didn’t really hold up.

As such, I started asking myself new questions of “Why not?” and “I wonder what would happen if?” More specifically, “Why does blending need to be limited to barrel-aged beers? Why not experiment with blending non-barrel-aged beers as well?,” “What if we didn’t limit ourselves stylistically to traditionally blended styles?,” and “I wonder what would happen if we included spices and/or botanicals to the mix? After all, we do that with some of our creative one-off casks…why would it be OK then and not OK to do that with a blend?”

Ultimately, it led to the final why-not of “Why not just remove any thought barrier at all, and pretty much open the creative process to include any beer we’ve made and any legit spice or botanical?” Bam! Floodgates = Open.”

So there it was, the impetus for the idea an ever-growing family of beers which would allow members of Team Stone to collaborate on special blends falling far outside the norm. Ultra rare, we tend to hoard this collection of blended beers for special occasions, so count yourself lucky if you come across them. These are the volumes you’ll want to keep your eyes peeled for:

The first two Stone Mixtape Ale’s were fashioned by GK and Small Batch Brewer Laura Ulrich, and Brewer Casey Harris and Brewery Trainer Hollie Stephenson, respectively. Stone Mixtape Ale vol.3 – Belong to Where You Are, the Neighborhood Blend, was a game-changer for the series in that it was developed in collaboration with craft beer-centric downtown San Diego pub, Neighborhood. The restaurant is located on 777 G Street, so owner Arsalun Tafazoli came to Stone with compatriot Anthony Schmidt to create a blend similar to Stone 07.07.07 Vertical Epic Ale. A lover of barleywines, but not that style's trademark booziness, Tafazoli wanted a rich but lower-alcohol beer, which gave us the idea of blending together 2011 Stone Old Guardian BELGO Barley Wine with our amber session, Stone Levitation Ale. And to get it to taste even more like Stone 07.07.07 Vertical Epic Ale, we then added in some of our lemon verbena-infused Stone 16th Anniversary IPA. The result was something that was nothing short of epic. Stone Mixtape Ale vol.4 – RK & JM’s Blend is the product of Stone Senior Bottling Line Technician Roy Knox and Lead Brewer Jeremy Moynier. Together, they selected the following beers and spent a lengthy tasting session coming up with the ideal percentages for each—2012 Stone Imperial Russian Stout aged in Bourbon Barrels, 2012 Stone Imperial Russian Stout aged in Red Wine Barrels, 2012 Stone Old Guardian Barley Wine aged in Red Wine Barrels and an unreleased Stone Belgian Brown Ale aged in Red Wine Barrels. To render this black-as-night, 11.2% ABV juggernaut more balanced and graceful, they added cherries and toasted coconut, as well. This hearty concoction should make its way to beer festivals and special Stone events in the coming months. Then there’s Stone Mixtape Ale vol.5 – The Winking Lizard Blend, which was designed by The Winking Lizard Tavern operating partner John Lane for the Ohio restaurant chain of the same name, and crafted in a blending session with Lane, GK, Stone President and Co-founder Steve Wagner, Bremaster Mitch Steele and the aforementioned Moynier. It’s a blend of Stone Cali-Belgique IPA, unreleased Stone Belgian Pale Ale aged in White Wine Barrels and Stone LeVariation Ale (Stone Levitation Ale fermented with the yeast strand utilized for our Belgian IPA, Stone Cali-Belgique IPA) aged in Red Wine Barrels that’s been dry-hopped with East Kent Golding Hops. (Whew!) Coming in around 8% ABV, it’s immensely fruity from the vino and Belgian yeast esters, and built as something of an "homage" to the Belgian Trappist classic, Orval. This beer will be featured at The Winking Lizard Tavern locations the entire month of June along with numerous other Stone beers. The goals of the Stone Mixtape Ale series continue to change with each iteration, but in the end, the original aspiration remains the same—to bring great brewers and great beers together to make something truly special, all originating from the queries "What if?" and "Why not!" It's a mission we're proud to say we accomplish with each new volume we release.