It should come as no surprise to anyone that the company that produced an unapologetic beer called Arrogant Bastard Ale sees no reason to defend its own self-assured state of mind. We’ve been bullish on the notion of bold, flavorful, artisanally produced beers long before many caught on and began to flock like moths with particularly good taste to an insanely bright and attractive flame.

Thanks to our naturally inquisitive and adventurous style of brewing—big hops, big flavor, big wood, etc.—we’ve been ahead of the curve at nearly every turn in the dramatic American craft brewing revolution. So, we’re justified in being pretty pleased with ourselves and our innovative brewed creations. Hence the moniker of our black India pale ale, Stone Sublimely Self-Righteous Ale.

Our first foray into the darker side of IPA came in 2007, when we released Stone 11th Anniversary Ale. The idea for that recipe came from Brewmaster Mitch Steele, whose first taste of a black IPA came at a small brewpub in Vermont called The Shed. The interplay between brightly bitter hops and roasted malts struck such a chord with him that he lobbied to make Stone’s 11th anniversary offering in that style. Surprisingly, he was met with a bit of resistance from Stone’s lupulin-addict CEO, Greg Koch, who raised an eyebrow and concerns that the style “had already been done” and that it was important for Stone to have its own unique voice rather than copying. However, instead of exercising executive veto power, he agreed that Steele could brew a pilot batch.

The determined brewmaster did so, presenting his prototype to the boss-man for review…and it was love at first sip, possessing a character and vibrance that truly wowed Koch with its uniqueness. Koch was overwhelmed by the immense deliciousness of this equal parts biting and luscious brew, which so brilliantly married resiny pine spikes with semisweet chocolate and a roasty backbone, delivering it all with a slightly viscous, nearly warming mouth-feel. GK busted out his “Hell Yes!” stamp (yes, he actually has one of those), and Stone 11th Anniversary Ale was brewed up in time for that year’s anniversary festivities. The beer was enjoyed by virtually all who had the good fortune to try it, and both Steele and Koch found themselves suffering from withdrawals once the final bottle was consumed. There was only one sensible solution—bring that beautiful black wonder back! 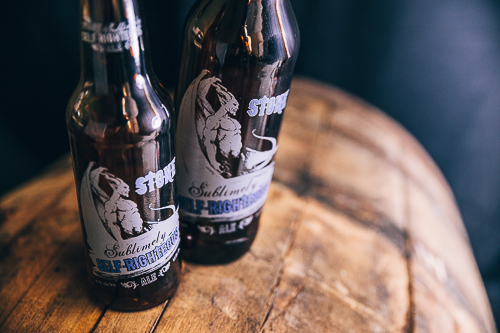 And so it came to pass that this recipe was not only re-brewed, but introduced as a new member of Stone’s year-round family of beers, making it one of the first commercially produced black IPAs to be brewed and bottled year round. Nowadays, black IPAs are not only common, but one of the fastest growing style categories in the country, nay, the world. Most people couldn’t see this trend coming…ourselves included. We just knew we were on to something and were thrilled to bring beer enthusiasts (and ourselves) something we knew they would be every bit as enamored with as we were. That exceptional beer made us feel good…about us. So, we named the beer after that feeling—Stone Sublimely Self-Righteous Ale. 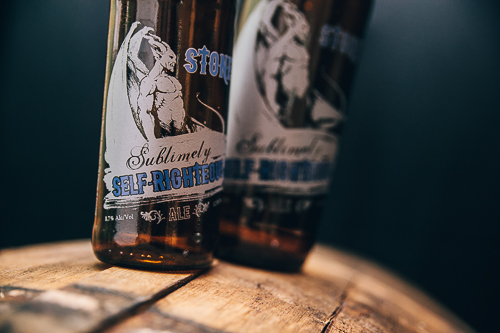 OK, so, maybe this once we felt inspired to explain ourselves. Let’s face it, bringing forth a beer of this character at a time when hardly anybody else was doing it is a fun story to tell. The fact that the beer remains one of the highest-rated black IPAs on Planet Earth makes it even more fun to rehash, just like pint after pint of this incredibly tasty and well-balanced beer. We hope it makes you feel every bit as happy with yourself, your tastes and your choice of beer. Cheers to you and best wishes on finding your own sense of sublime self-righteousness!!!