At Stone, we are always on the lookout for new ingredients, be they hops or malts, or fruits, herbs, spices, and other interesting and exotic foods to use in our beers. This sense of exploration has resulted in many wonderful beers over the years. And in 2014, with the inception of the Stochasticity Project, our Brew Crew has been enabled to try some very interesting things and brew some crazy beers that don’t necessarily fit into our perceived mode.

Early this year, Peter Wiens, our director of brewing operations in Richmond, Virginia, forwarded me some information he had received about an artisanal malting company in Colorado that was malting gluten-free grains for the production of gluten-free beer. Grouse Malting and Roasting Company in Wellington (located on the Front Range of the Rocky Mountains) was producing some interesting buckwheat and millet malts. I was aware of brewers using these grains in beers before, but was unaware that anyone was actually malting them and was curious about how they would perform in one of our beers. We had just released a gluten-reduced beer, Stone Delicious IPA, so I wasn’t ready to brew another beer without gluten. But as I thought more about these grains, I realized that brewing with them might be a nice fit for the Stochasticity Project. 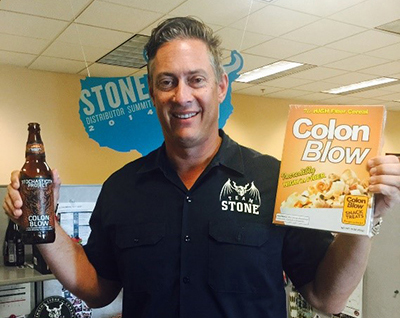 I contacted Grouse and arranged for some of the malts to be delivered to Kris Ketcham at Stone Brewing World Bistro & Gardens - Liberty Station. I asked Kris to brew a multigrain ale using malted millet, malted buckwheat, regular barley malt, wheat, oats and triticale. Note that I purposely did not include rice or corn in the recipe—I think you can guess why!

I jokingly suggested to Kris that we call this beer “Colon Blow” or “Super Colon Blow,” which is a reference to a 1980s-era Saturday Night Live commercial parody featuring Phil Hartman. The skit touted a cereal that was packed with so much fiber that it would take 30,000 bowls of a regular oat bran cereal to equal its fiber content. Well, our media department rejected the name Colon Blow immediately, but Kris then suggested the name “30,000 Bowl Pyramid” as an alternative, and it stuck. I’m not sure whether media missed the reference or were simply tired of dealing with us at that point.

After Kris’ beer was released and was well received, we made some small recipe changes, developed a full-scale recipe to brew in our Escondido brewery, and started the planning process for releasing this beer as part of our Stochasticity Project series.

We have a naming team here at Stone, and a lot of names were bounced around for consideration, including “Let It Grain” and “Multigrains of Truth.” We ended up choosing the name “Grainiac.” But at some point during the beer release planning process, our sales team caught wind (pun intended) of the “Colon Blow” idea, and many of them decided it would be hilarious and fun to call this beer “Colon Blow” instead. They pushed Greg and media hard on the name, and eventually got approval. 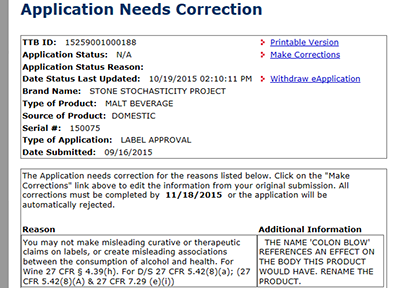 And, of course, when we submitted the label to the Alcohol and Tobacco Tax and Trade Bureau (TTB) for government approval, it was quickly rejected, with the TTB telling us to name the beer something else. So there it was. We were back to Grainiac.

The beer itself was an interesting and challenging one to brew. The buckwheat and millet grains are much smaller than malted barley, so we had some trouble cracking them in the malt mill. And the beer lautered horribly, but our brewers were able to get it through.

The resulting beer is deep amber with a unique and delicious nutty malt character, and pronounced citrus hop notes from the Cascade and Centennial hops.

I guess you will have to start the TTB back at the basics of AB, and work them up through Lukcy, and then onwards, so that this person/team would appreciate the taste and label humor of Stone.

TTB - typical must be politically correct overreaction, Colon Blow = medical therapeutic claims. What about he phony make 'Bob' the big man all the women want and all his wife's friends envy? Bogus enhancement products therapeutic claims?

Wish you could have used colon blow. Hilarious!. Love old SNL skits. Can't wait to try it and get it in my store, assuming it will be distributed to AZ.

Just had my first taste of "Your father smelt of Elderberries". Wow. Didn't think it would be this good... Fan of Stone Brewing, but who in their right mind isn't? I will seek this out again, can only hope it's available. Guys at Stone- please set up an email so we can give feedback directly. I have NEVER been disappointed.... Thank you....