We’ve been (mis-)labeled “arrogant.” We get it. You brew up a beer called Arrogant Bastard Ale and have the audacity to demand that everybody be entitled to the finest beer today’s craftsmen and women can brew, and people form certain opinions. But in reality, we’re not arrogant. What we are is extremely passionate and confident in craft beer and our abilities in that arena. To a person, our Brew Crew works tirelessly to up their technical knowledge and abilities. From keeping up on best practices and emerging techniques for upping beer’s flavor, increasing the efficiency of our brewhouse, stimulating our yeast so they perform as optimally as possible or staying on top of the ever-changing hop crops and the immense influx of new botanical varietals being produced from the Pacific Northwest to Australia and New Zealand, Brewmaster Mitch Steele and his team have their hands (and heads) full. Each day offers a new opportunity to learn and grow, and our beers reflect that—perhaps more now than ever before.

Throughout the first quarter of 2015, we’ve made a number of announcements about our core line of beers. One of the biggest of them was that we were discontinuing Stone Pale Ale (the first beer we ever brewed) so we could introduce a new version of it, aptly dubbed Stone Pale Ale 2.0. Why would we do something that crazy? Well, as much as we march to the beat of our own drum and, admittedly, do some things that border on nutty and are, at very least, against the grain, we’re not full on lunatics. So, the switch to Stone Pale Ale 2.0 was a logical one. We simply examined our pale ale against the current craft beer landscape. Times change and so do beers and the types of beers drinkers desire. Especially our fans. Like us, Stone enthusiasts reach for bolder-flavored brews…often with big hop appeal. In our minds, Stone Pale Ale wasn’t delivering a taste consistent with what our fans have grown to expect and appreciate, so we spent a year developing a less malty, more bitingly hoppy pale ale that’s far more West Coast and less steeped in English tradition. It’s slated to start hitting shelves later this month and we’re excited to share it with the world. Explaining the MO behind Stone Pale Ale 2.0 helped our fans to more easily understand our thinking when we dropped the hop-bomb that we were discontinuing Stone Ruination IPA so we could release Stone Ruination Double IPA 2.0. The news was still met with many a knee-jerk reaction from fervent fans who absolutely love the original version of the world’s first full-time brewed-and-bottled West Coast double India pale ale. Tons of people hit us up on social media, telling us Stone Ruination IPA was the beer that got them into craft beer. We’ve been hearing that for years. It never gets old or loses any of its gravitas. That means the world to us, so there was no way we were going to take something like that away from our fans without giving them something better in return. And that’s where all of our brewers’ diligent studying, development and cutting-edge knowhow came into play. The whole point of creating Stone Ruination Double IPA 2.0 was to incorporate new hops and brewing techniques that didn’t exist when we came up with the recipe for Stone Ruination IPA back in 2002. Twelve years is a long time and if you thought we were confident back then…well, you were right…but we’re even more confident now—in ourselves and in Stone Ruination Double IPA 2.0! 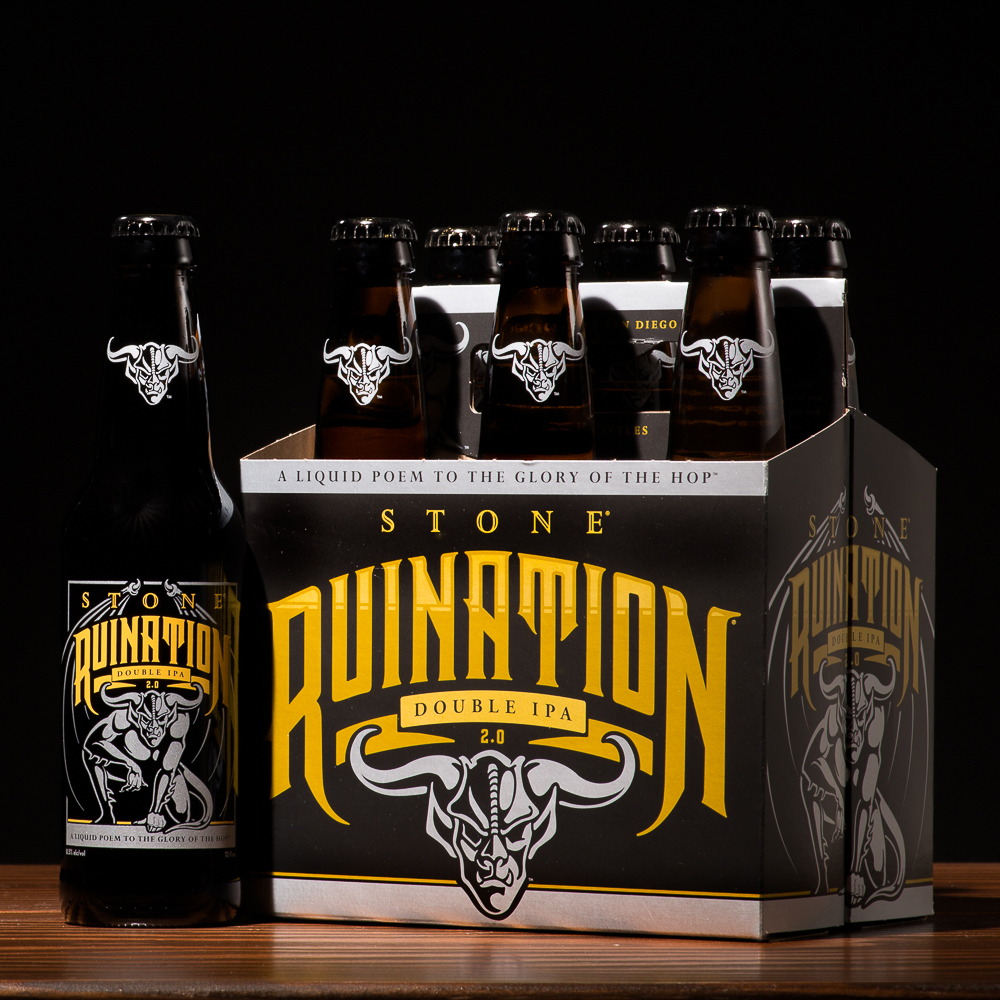 Our revamped recipe brings in a different hop bill combining classic varietals—Centennial and Magnum—with newer cultivars that weren’t even a glimmer in their growers’ eyes 12 years ago. Those newbies are some of the hottest hops on the market: Citra, Simcoe and Azacca. Makes a hophead’s mouth water just reading those names in rapid succession, doesn’t it? Ah, so now the decision to update the recipe seems much clearer…and much less crazy. We spent the better part of a year running multiple prototypes of this beer through the brewhouse and bar at Stone Brewing World Bistro & Gardens – Liberty Station, tweaking quantities, addition times and more in an effort to make the best update to this storied beer as possible. And that’s just what we ended up with—a double IPA that bursts forth with hop aroma akin to melon and a variety of citrus and tropical fruits, and flavors that fall right in line with those tantalizing scents. A lighter malt character allows that fruitiness to shine, but it’s more than a reduction in grain and proper attenuation that’s responsible for Stone Ruination Double IPA 2.0’s brilliant taste profile. We employed a modified take on the hop-bursting method that brings so much hop flavor to our sessionable Stone Go To IPA. It’s another one of those technical revelations we made in the more recent future, which we were excited to use when taking on the task of improving on Stone Ruination IPA. There are a number of other tricks of the trade we applied to this beer, but we have to keep some of those under our hats. Now, it’s time to get beyond the whys and hows of Stone Ruination Double IPA 2.0, and get to the most important part—experiencing the beer. As always, Steele has compiled all the vital statistics and his personal notes on aroma, flavor and everything else about the beer, and our Craft Beer Ambassador “Dr.” Bill Sysak has all the goods on what’s good to pair with it, but the real proof is in the pudding…or in this case the extremely hoppy, modernized-to-be-even-more-amazing Stone Ruination Double IPA 2.0. It means as much to us as it’s meant to all of you, and we hope you’ll revel in the second stanza to our “liquid poem to the glory of the hop” right along with us! 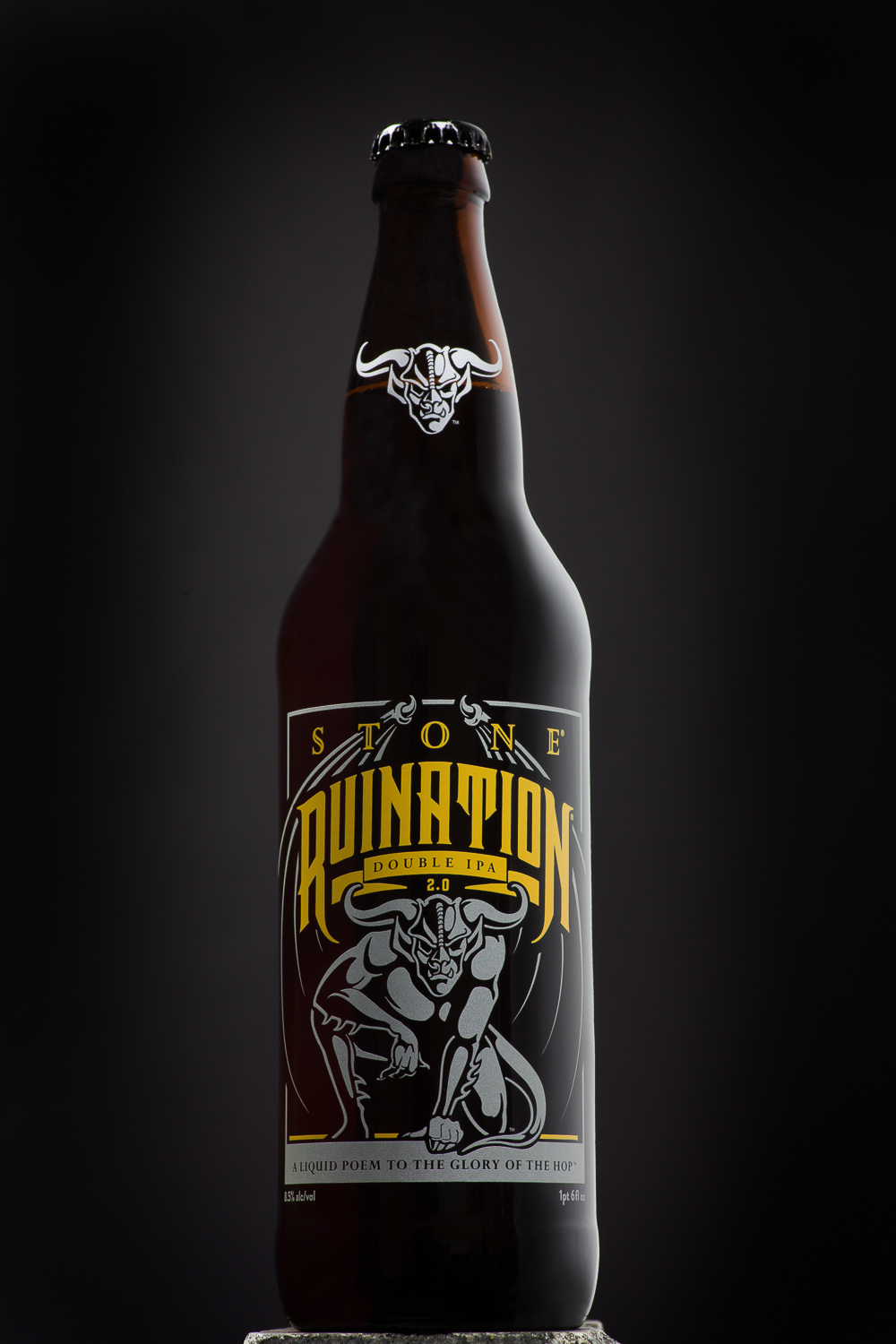