If you've ever been to one of our Anniversary Celebrations, you're awesome. You've been part of something special. Part of something larger than we could have ever envisioned. Something larger than we ever could have created without you. The Stone 16th Anniversary Celebration & Invitational Beer Festival is SoCal's biggest beer festival, with over 100 beers to choose from! It's taking place on August 17th and 18th at nearby California State University, San Marcos. Our Rare Beer section is sold out, but we’ve still got tickets left (for now, anyway) for Friday night’s Brewers Reception and the main event on Saturday! Over the past 15 years, we've raised MORE THAN $1.5 MILLION for local charities through these neat little get-togethers with a few thousand of our closest friends, including an astronomical $240,000 at last year's festival alone! Given that we're Stone, we always want to go bigger and better, which is why we know that this year's will be the greatest ever! ('til next year at least...)

The main event is taking place on Saturday, with two sessions, Session A from 11am-2pm, and Session B from 3pm-6pm. Your golden ticket includes:

Delectable food will be available for purchase from some of our favorite local restaurants/vendors and our very own Stone Catering. Never to be missed, we'll also have the (in)famous Arrogant Bastard Ale onion rings. (This is the only event each year where we offer them; the only other way you get get em is if you make them yourself!) We're doing it all up bigger and better: pouring the very first drops of the brand new, super-secret-super-fresh Stone Enjoy By IPA, adding live music and more space, including a nifty new area we're calling Steve's Cigar Lounge. (Stone prez/co-founder Steve Wagner + cigars + kickback area = Steve's Cigar Lounge.) We'll of course have plenty of Stone 16th Anniversary IPA on hand as well! 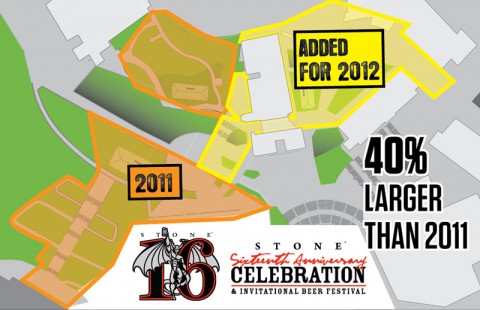 The night before, we're also hosting the Friday Night Brewers Reception... undoubtedly our best kept secret! Here, you get to:

And we did mention that 100% of ticket proceeds go to local charities, right? Surfrider Foundation, The Boys & Girls Club of San Marcos, Palomar Family YMCA, and Fight ALD will be the beneficiaries of this year's ridiculously oversized checks, and they couldn't be more thankful for your support. (We are too.) As a friendly warning, we wanna let you know (so you can't say we didn't tell you so): Tickets are going fast, and they WILL sell out, so GET YOURS NNNNOOOOOOOOWWWWW!!! </monster truck commercial voice> To raise a little more ca$h money for some deserving local organizations, we're also putting on the bi-annual Stone Dyehards for Charity. The premise is simple: you promise to dye your hair red*; other people make donations to see it happen. 100% of the funds you collect will be divided equally among four local charities, and everyone wins. If for some strange reason, you don't feel like dyeing your hair but still wanna help, you can totally make a pledge for those who are participating. (This faithful Stone blogger is also gettin' in on the action should you wish to direct some funds to my red mullet campaign. Just sayin...) 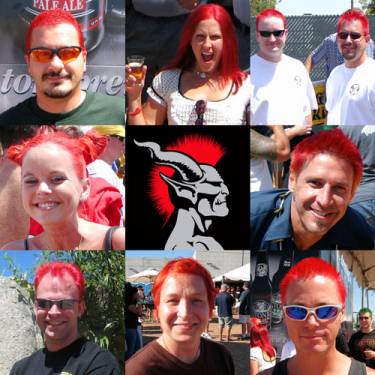 * After getting a few concerned comments from fans asking about the color red and the unfortunate shootings in Aurora, CO, Greg took to his Facebook page:

"A couple folks have asked me if, due to the fact that the Colorado shooter evidently has orange hair, we’re going to choose to not dye our heads red this August for our every-two-years fundraiser called Dye-Hards for Charity.

My response has been that there is, of course, no connection whatsoever between our fundraising event, and that terribly disturbed person, and drawing one would be inappropriate. Thus, we are not altering our plans to raise money for important local charities. Hell, I’m not going to let some wacko steal the color red from us. Or the great positive energy we have with our awesome fundraising event."

All that said, we can't stress two things enough: 1) We're stoked. This is going to be a blast and we're really hoping you can join us. We'd love to be able to raise over $300,000 for charity this year between Dyehards and ticket sales; and 2) Speaking of ticket sales, did we mention that this will sell out, and that you can get tickets right here, right now? I think we did, but I just had to make sure. See you in a few weeks! Cheers!