You don’t have to be a certified beer judge or Cicerone to know when the taste of a beer strikes your fancy. But pinpointing exactly what you’re experiencing—that mysterious connection between your brain and taste buds—can be tricky. Fortunately, there is a quite enjoyable remedy for this: Taste more beer! But also smell more beer and visually examine more beer. It takes all of one’s senses to thoroughly evaluate ales and lagers. (OK, you don’t need to hear beer, but one can’t deny the anticipatory delight that stems from the sound of a bottle being opened or the sadness brought on by the last gasps of an emptied keg.) Practice makes perfect when it comes to exercising and refining your palate as well as the way you interpret beer’s appearance, scents and flavors. Many reading this have had a lot of practice drinking beer, but read on for a crash course on how to really appreciate it. 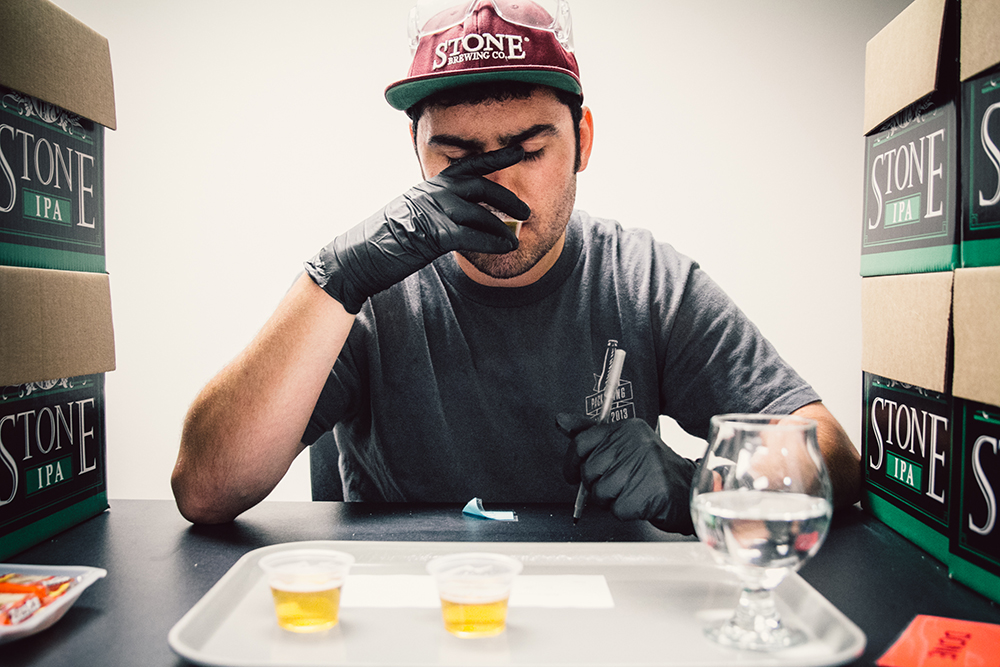 We spend a great deal of time on sensory analysis here at Stone, and encourage fans of good beer to take time out to really get to know the ales and lagers they consume. Take in a beer’s aroma, observe its color and clarity, feel the way it sits on or perhaps coats your tongue and, of course, partake in the all-important taste test. Doing so will help you to appreciate the brew’s charm as well as identify any possible deficiencies. The latter can stem from the brewing process, but there are numerous factors going beyond how a beer is made that can affect the way you experience it. Well maintained equipment, proper storage conditions and serving temperature are all important. In terms of temperature, many complexities will be hidden from one’s palate if the beer is served in frigid condition. Ever had a chilled imperial stout and found it to be pretty one-dimensional at first, only to discover rich overtones and a wealth of varying flavors as you near the last sip. It’s not that the stout’s flavorful compounds have settled in the bottom of the glass—increased temperature allows our taste buds to pick up on a beer’s subtler characteristics. Let’s start with the sense of sight. What color is the beer when you hold it up to a light? Now, don’t just go with “light” or “dark”—beer covers a wide spectrum of hues ranging from pale gold to reds and near-blackish brown, and even a slight variation from garnet to chestnut can signify a deeper malt flavor. In addition to color, check to see if the beer is hazy or clear. Is the foamy head sparse or thick and fluffy, and what color is it—clear white, tan or cappuccino-toned perhaps? Sometimes a telltale difference in head color can point to a higher alcohol-by-volume (ABV), like the difference between the beige foam atop a glass of Stone Smoked Porter and the mocha-colored head on a snifter of Stone Imperial Russian Stout. 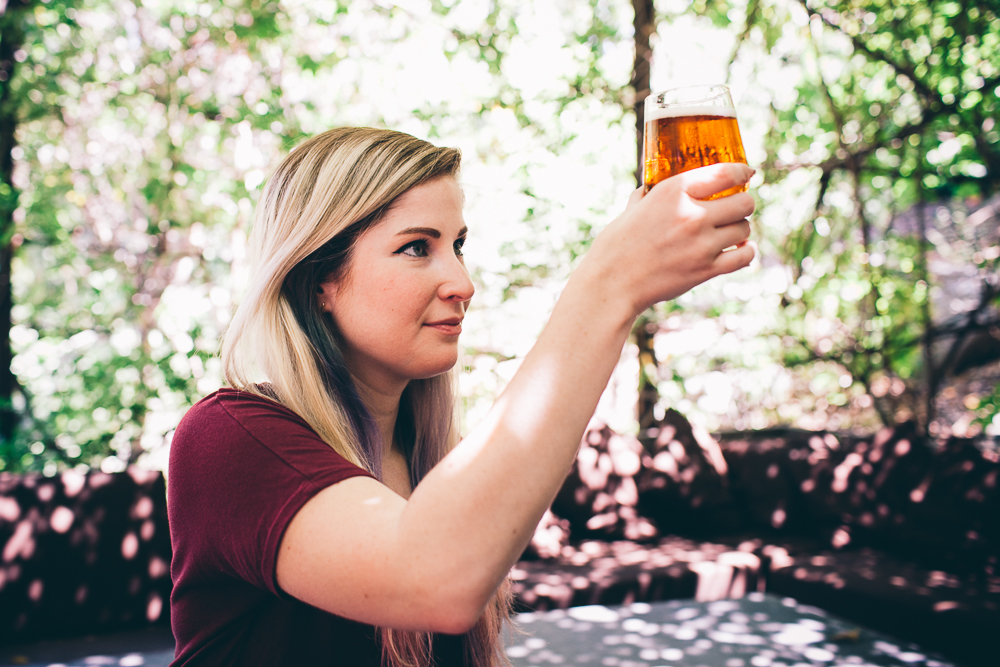 Like appearance, the importance of aroma is often overlooked in favor of convenience when one drinks right from the bottle or can. I’ll admit, I’ve been guilty of this. Sometimes the thought of dirtying one more glass causes me to go against my better beer judgment. But the bottom line is if you are trying a beer for the first time, you will never truly taste it until you drink it from a glass. And glassware selection matters! The straight, up-and-down shape of a standard pint glasses allows aromas to escape, while a tulip-shaped glass or snifter captures them for maximum enjoyment. Personally, I like stemless wine glasses, which are great for those who enjoy both beer and wine on a regular basis. Swirling beer in your glass will also help regenerate foam and more fully release aromas. Just don’t go too swirl-crazy or you’ll shake all the carbonation out of the beer (or, even worse, some of the beer out of your glass)! And when you inhale, there’s no need to fill your lungs like you’re coming up out of the ocean for air. Just a quick sniff or two at first is good. While you’re drinking, aromas will also naturally make their way into your nose and mouth, so relax and let it happen. Aroma is most often talked about with regards to hops, which are responsible for a lot of fruity, botanical elements mirroring the scents of citrus, tropical fruit, grass, pine and flowers. But there’s more to a beer’s olfactory hints than hops. A whiff of alcohol hiding behind that bouquet can point to a high ABV. Fruity or spicy esters produced by yeast, particularly in Belgian beer styles, produce compounds that bring out scents akin to banana and cloves among others. The up-front aroma can color your perception of a beer’s flavor before you even taste it, and even afterwards, as odor compounds can make their way to your olfactory glands through the nasal passages in the back of your throat. That’s part of why craft beer belches can taste like the ale you just enjoyed.

Identifying aromas can be tricky sometimes, so follow your gut—or rather, your nose. Smelling chocolate in Arrogant Bastard Ale, even though nobody else picks that up or are focused mainly on the beer's hop character? That doesn’t mean your nose is wrong. There are dozens of odor compounds that can emanate from a beer, and while some will certainly be more prominent than others, picking out the more subtle ones is possible. (Heck, maybe you just have a more advanced sense of smell than the rest of your beer buddies…pretty cool!) 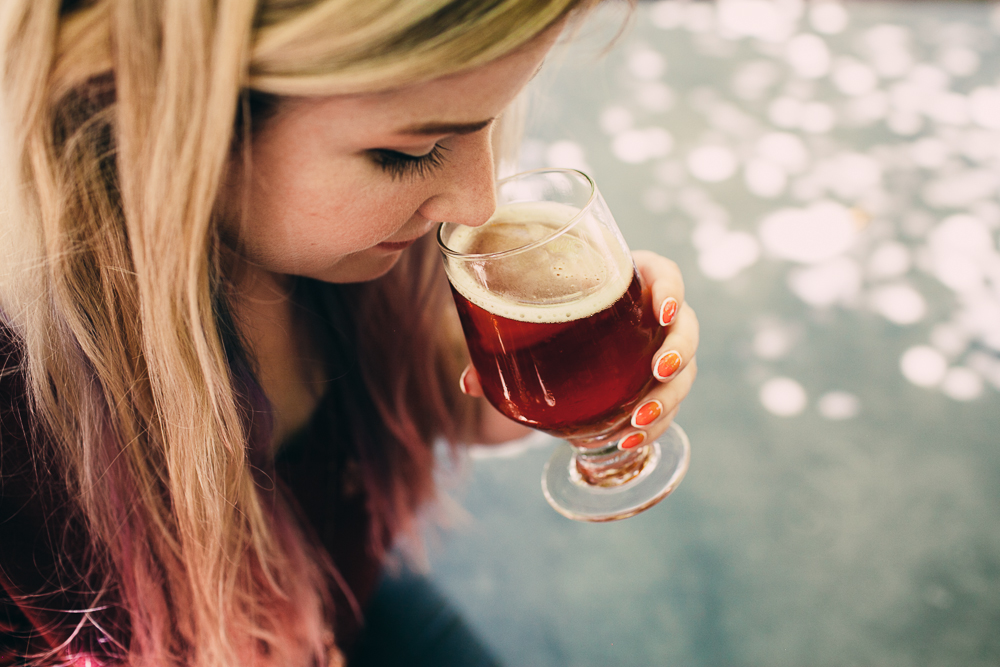 Now that you’ve stared at your beer and sniffed it within an inch of its life, you should already know a little bit about it before even tasting it (even more if you have a beer menu in front of you telling you the style and ABV). Before going in, remember that the first sip of a beer can comingle with flavors already on your palate from food, other beers, coffee, toothpaste or any of the host of other things that may have preceded this particular brew. The first thing you’ll want to do is sacrifice a small amount of your beverage for the purpose of cleansing your palate. Let the beer coat your tongue. Feel free to pick out any initial flavors at this point, but reserve final judgment for later sips. Pay attention to the texture and body of the beer as well. How lively or absent is the carbonation? Extreme? Inadequate? Just right? Does the beer feel thick and viscous? Sticky? Thin? And what about the finish or aftertaste? There’s a lot to consider, so keep more than just the most overt characteristic—flavor—in mind. Improper levels of carbonation or a strange mouthfeel can make or break an otherwise tasty beer. Too much bubbliness can distract from a beer’s flavors, and not enough bubbles, while fine for cask beers and stronger beers, might not be the best for IPAs. If all this sounds like a lot of work just to drink a beer, that’s alright. You don’t need to have an internal debate with your senses every time, and it’s perfectly fine if sometimes you just feel like having a non-academic, purely-for-pleasure drink. But if you are truly tasting beer, or trying something for the first time, you owe it to the people who lovingly crafted that beverage—and more importantly, yourself—not to just funnel it down your gullet.

And while we’re consciously thinking about the feelings of brewers everywhere, remember that when you like or dislike something, it’s your opinion. It’s fine if a particular beer isn’t for you, but that doesn’t mean it’s wrong. Sometimes keeping an open mind and tasting things outside your comfort zone can make you grow to appreciate them more and more. (And yes, I’m talking to you, guy or gal who drinks nothing but IPAs then blasts barley wines, hefeweizens and witbiers simply because they are nothing like their hop-heavy standby!) But in all seriousness, there are some flavors and scents that never belong in beer. If you detect a buttery taste similar to the foodstuff used to flavor microwave popcorn or a tinny characteristic like what’s found in some canned vegetables, or smell rotten eggs, plastic, wet cardboard or vinegar, that’s bad. Pale ale with essence of Band-Aid strips and Del Monte corn kernels probably wasn’t what the brewer was going for, so let the brewery or bartender know. These are signs of problems that can arise in fermentation, packaging, storage or service. For those near our Southern California home who would like to receive a crash course in analyzing beer conducted in tandem with a tasting of some of our small batch specialties, we will be conducting one of our educational Beer U courses all about sensory evaluation at Stone Brewing World Bistro & Gardens – Escondido on July 14. The class will be led by our Research and Small Batch Manager Steve Gonzalez, a long-time veteran of the beer, wine and spirits industry who will break out numerous rarities including Stone Passion Project, a Belgian-style abbey ale aged in wine barrels before being racked onto fresh passion fruit from our very own Stone Farms. Not familiar with the farm? You’re in luck. I just so happen to know of a brilliant blog post stocked with details on that lovely place!