Notes from the European tour with Metallica and Enter Night Pilsner

I wrote this letter to Team Stone to share my experiences with them and express – as best I could – this incredible journey I’m on. That same gratitude for your commitment and desire to share this experience extends to you, our fans. Thanks for coming along on this ride with us.

Twenty-four-year-old me would call bullshit if I said I was on tour with Metallica. But young me can kindly shut up because it’s true. OK, fine. I’m not ripping guitar riffs that sound like hell-Mozart for 75,000 fans. James hasn’t asked me to sing yet, and Lars isn’t letting me near his sticks. This is all for the best.

I am doing what I know, bringing people and great beer together. Specifically the Venn diagram of two worlds: heavy music and craft beer. What I’ve learned on this tour so far is that, like Metallica, some people love what we do with an intensity. And, like Metallica, other people think we’re too loud and aggressive, not like the polite thing they’re used to. We just keep doing what we know and trust the right people will dig it.

As you know, we made a beer with Metallica. The ‘we’ is the entire Stone team and our Arrogant Consortia imprint. Enter Night is the beer. It’s a certified badass pilsner. And we’re taking it on its first world tour.

Whilst Metallica is mostly busy melting the faces off stadiums full of fans, Enter Night and I are jumping city to city with them, warming up their fans before each show the only way we know how: sharing a craft beer at some of Europe’s best craft beer bars.

The tour is wild. It makes the hair of the world stand on end.

The Enter Night events have been incredibly, incredibly awesome. I wish every single one of you was here with us (we’d go broke due to travel costs, but what a way to go out). I’m trying to share it with all of you. The only way I know how is by making these little videos on the Instagram. Yeah, my mug’s on there and I’m promoting the hell out of Enter Night because you guys worked your asses off on it and it’s my job to get the word out. But the best part of those videos are the Metallica fans, crammed into craft beer bars across Europe, absolutely jacked up to share a beer or two and then go watch their favorite band set their world on fire. 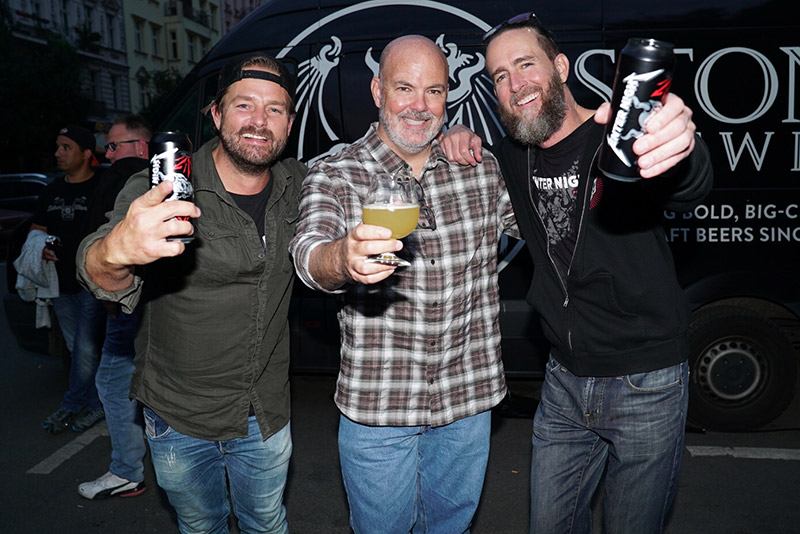 Sometimes it’s just me, our man Christoph and Enter Night at these parties, trying to make one fan at a time the old-fashioned way. It’s no tea party. Other nights Lars and Rob join us, and the room explodes even more.

We knew a short bit in advance at the event in Paris that Lars and Rob were coming. Information like this is like having a live grenade in your pocket. You have to detonate it at just the right time. If it got out too early, the awesome little pub would be swallowed whole and all that would be left of it is a crater with a tattered Kill Em All patch. So we waited until 20 minutes before we knew they were going to be there, and told the bar owner.

I’d met a few really good Dutch guys at shows in Zurich and Milan and Barcelona who were following the band around Europe. We recruited them to create a gauntlet and pathway through the crowd. They formed a human chain. The crowd started to sense what was going on. The tension and excitement ratcheted. It was hard to tell if this was going to all be just fine, or go terribly, terribly wrong. Lars and Rob walked in, everyone braced themselves, the room became hearing damage, and—it went off without a hitch. A riot of hoots and screams, but not a riot. Given a chance, most people don’t ruin things. Especially the true fans.

Lars and Rob don’t have to show up to these things. We agreed to make a beer together; their souls were not part of the agreement. Touring the world and beating the almighty crap out of musical instruments is pretty exhausting. But when they can, they do show up. When they do, it’s because they want to see this weird and awesome convergence of craft beer fans and Metallica fans.

Plus, this is a collaboration. We didn’t brew it and slap a band sticker on it. They were involved in every step of the process. It is in every sense a meeting of our minds and talents. Of our collective come-from-the-fringes history.

Not every Metallica fan is a craft beer fan. And vice versa. But there is a common thread. Most Metallica fans are people who felt numb in the mainstream and searched out a more inspiring alternative. They like to experience things that are a little richer, deeper, and louder than average. Or a lot.

A Metallica concert has its own gravity and weather system. At the concert in Paris, at one point I turned around and saw 75,000 people. All singing and cheering in unison. That’s more than the population of most American cities. It becomes an overwhelming sea of humanity. 75,000 heads singing along. 150,000 arms raised and pumping.

European fans are really incredible. Their energy is nuclear. They don’t try to play it cool, which is the ultimate cool. They’re intense, but also intensely polite. Which is also intensely cool.

I wasn’t sure how people were going to respond to Enter Night Pilsner. The word “pilsner” gives some craft beer fans the heebs. But this is not a light beer. Not a typical industrial Euro Pils. It’s an old-school, historical northern German-style Pils with a top note of new-school hops… and 5.7% alcohol a hefty 45 IBUs. A pilsner played through a distortion pedal. People are responding really, really well. I’ve been incredibly pleased with, and thankful for, the reception.

The best thing about these smaller events before Metallica shows is the personal connections. Shows aren’t time for talking. They’re time for chaos. At these craft beer bars, I watch fans from around the world become friends. Scandies and Spaniards and Germans… they just bond.

I met the founders of the oldest Metallica fan club who started it in Italy in 1984. I met a kid and his dad with a Metallica flag at one of our events; a couple weeks later, the kid broke the internet by being invited on stage to play with the band. His name is Evan. He’s 12. In Metallica circles, he’s famous. He oozes enthusiasm. What the hell does this have to do with beer? Everything. We make craft beer not as some lonely science project. We make craft beer to enhance experiences like these. Plus, his dad Chris told me he loves Enter Night, and we shared some backstage.

The dream ticket for Metallica shows is the Snake Pit. You can’t buy them. They are bestowed. The stage wraps around the Snake Pit. The band doesn’t play in front of you, but around you. At each one of the night-before gigs I do, I have the honor of representing the band by raffling off two Snake Pit passes.

Throughout all of this, the guys in the band, and the Metallica team have been incredibly gracious. We’re not getting matching tattoos or anything, but I’d definitely describe my relationship with each one of them between friendly and outright friends. And I know that goes for the Stone folks in our organization who interact with them.

I wish that I could take every single one of you into the Snake Pit. I know that not every Stone family member is a Metallica fan, but I know everyone of you would be a fan of the experience.

It’s an honor and a privilege to be Enter Night Pilsner’s ambassador, and to be following this band around the world.