You can deck the halls with as many boughs of holly as you can get your mittened hands on, but without plates, bowls, baskets and platters of tasty holiday-themed sustenance scattered around your decked out abode, those decorations are bound to be a bit for naught. You can’t eat holly or mistletoe (or at least you shouldn’t), and those candy canes and stale popcorn hanging on the tree just won’t cut the myrrh-infused mustard. What every home needs come December is an array of warming, comforting treats and tidbits that burst with traditional holiday flavors and drive home the yuletide spirit.

Never ones to point out a deficiency without providing a potential solution, we have the answer to any home’s lack of goodies in the form of several beer-infused recipes straight from our own Stone Brewing World Bistro & Gardens kitchens as well as some well-respected craft beer and cooking aficionados. Clear some space in the kitchen, line up those brews and join us in making sure everyone who visits your place over the holidays leaves feeling fuller and a lot more jolly! 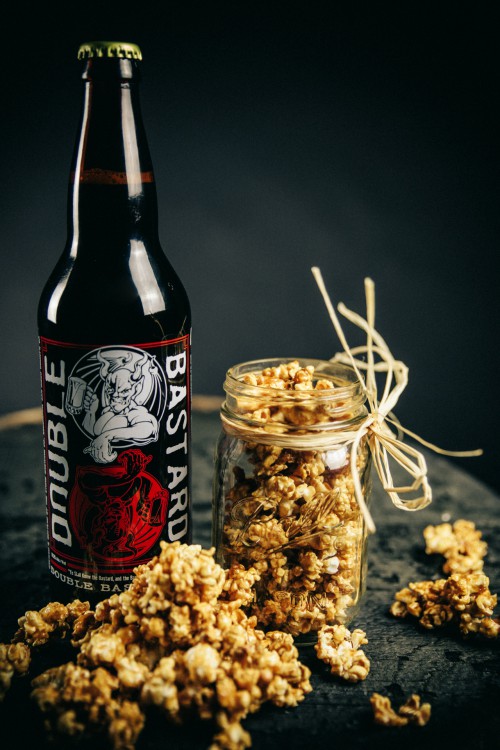 Yield: 4 servings | Based on original recipe from Jackie Dodd

Preheat oven to 250 degrees (Fahrenheit, of course) Pour the corn in a paper sack, fold it shut and lay it in the microwave. Microwave on high for 4 minutes. Keep your distance to prevent radiation poisoning, but stay close enough to listen for when the popping slows to about 1 pop per second. Remove from the microwave, measure out 7 cups of popcorn and transfer it to a large bowl. In a saucepan over medium-high heat, stir together the sugar, corn syrup, ½ cup of the Double Bastard Ale and butter. Once the sugar has dissolved, remove from the burner and stir in the remaining Double Bastard Ale. Spray the silicon portion of a spatula with cooking spray and use it to plop the caramel mixture into the bowl with the popcorn. Stir everything around so that the corn gets coated with the thickened Liquid Arrogance, then spray a large baking pan with cooking spray, and spread the popcorn out in an even layer. Bake for 20 minutes, stir, and bake for 20 more minutes (the waiting is the hardest part). Remove from oven and spread into an even layer on a baking sheet lined with parchment paper. Immediately sprinkle with salt, then let cool and go make some friends. 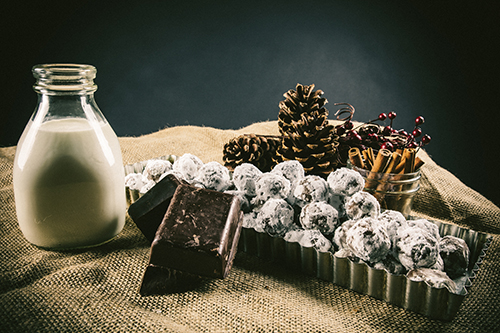 Stir in the 2013 Stone ESPRESSO Imperial Russian Stout and corn syrup, mixing until everything is completely incorporated. Stir in the wafers and nuts, then cover the bowl and let it all stiffen up in the refrigerator—that should take about an hour. Place the remaining sugar in a shallow bowl. Remove the mixture from the refrigerator and scoop out 1 tablespoon portions. Use your hands and guesstimate—it’s more fun and you’ll need those palms to roll those portions into balls. Toss the balls in the sugar and coat evenly on all sides. Transfer the balls to a baking sheet, wrap the baking sheet with plastic wrap and forget about them in the refrigerator for at least 24 hours (though, they’re even better after 2 or 3 days). And like a good imperial stout, they’ll keep awhile…about 2 weeks. 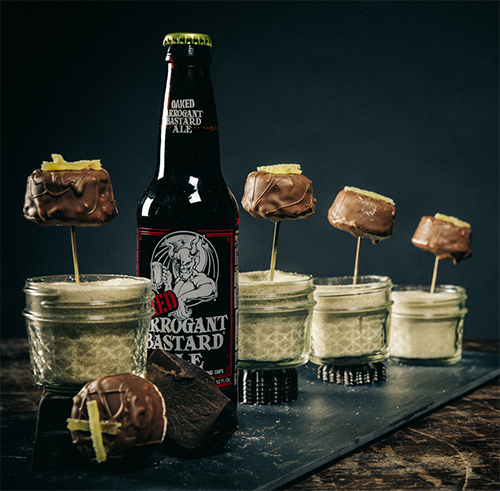 Yield: 20 pieces | Based on original recipe from Emma Christensen

Combine ⅓ cup of the OAKED Arrogant Bastard Ale with the extract in the bowl of an electric mixer with a whisk attachment. Whisk in the gelatin until it’s free of any nasty lumps. In a saucepan over medium-high heat, combine the rest of the OAKED Arrogant Bastard Ale, syrup, granulated sugar and salt, and bring the mixture to a boil. Place a candy thermometer on the side of the pan and cook, stirring, until it foams up and reaches 225 to 230 degrees. Let it bubble for 5 more minutes, then remove it from the heat. Turn the mixer onto a low speed setting and carefully (again, carefully) pour the hot syrup into the gelatin mixture. Once all the syrup is in there, turn the mixer to high and let it whip into a full-on meringue (the fluffy stuff, not the dance). That should take about 10 minutes. Coat a loaf pan with non-stick spray and transfer the mixture into it, then leave it be, covered, for at least 12 hours. When the marshmallow mixture is set, lightly dust the top with confectioner's sugar. Turn the marshmallow out on a cutting board, dust the other side with confectioner's sugar and cut the marshmallow into 20 equal-sized cubes. Melt the chocolate in a double boiler over medium heat. When the chocolate is melted, whisk in the butter, 1 tablespoon at a time, until it is glossy and thick enough to coat those marshmallows. Then—you guessed it—coat the marshmallows in chocolate and set aside on a rack or baking sheet lined with wax paper. Place a piece of candied ginger atop each marshmallow while the chocolate is still wet, then let dry. 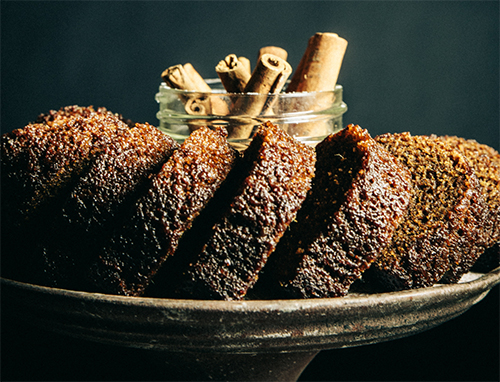 Yield: 1 loaf | Based on original recipe from Nigella Lawson

Preheat oven to 325 degrees (yes, Fahrenheit…geez). Line a 13-by-9-by-2-inch cake pan with aluminum foil and douse with cooking spray. In a saucepan over low heat, stir together the butter, syrup, sugar, beer, ginger, cinnamon and cloves until it melts into one ooey, gooey mass of deliciousnes Remove the pan from the heat and whisk in the flour and baking soda. In a separate bowl, beat the sour cream and eggs together. Whisk the egg mixture into the batter until it’s perfectly smoothed out, then transfer it into the cake pan. Bake for 45 minutes (it should be shiny and pull away from the edges of the pan) and let cool before slicing into that sucker. 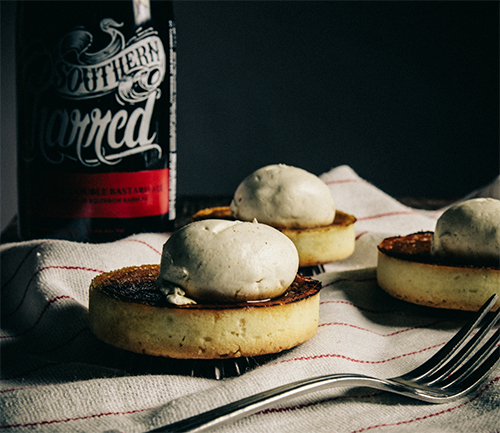 Combine the sugar and butter in the bowl of an electric mixer with a paddle attachment. Add the egg yolks, one at a time (pace yourself), until they’re totally incorporated. Use a spatula to scrape down the bowl, then mix in the heavy cream. Scrape down the bowl yet again, then add the flour and mix until the point where it’s just barely combined. Wrap the dough in plastic and refrigerate for at least 4 hours. Plop the chilled dough on a flat surface and roll until it’s ⅛-inch thick. Cut out 3-inch rounds and place in equal-sized tart pans. Refrigerate them until chilled. In the meantime, preheat oven to 325 degrees (F). Place the shells in the oven and bake until they are lightly browned, then remove from the oven and set ‘em aside. Returning to your trusty mixer, beat together the pumpkin and butter, slowly and gradually adding that last ingredient. Mix in the sugars, then scrape down the bowl. Beat in the cinnamon, nutmeg and vanilla, then scrape down the bowl. Add the eggs, one at a time, and once they’re blended in—yes, you are clairvoyant—scrape down the bowl. Blend in the milk and Southern Charred and, once they are fully incorporated, pour equal amounts of the batter into each tart shell. Place the tartlets in the oven and bake until the filling is set, about 10 minutes. Remove from the oven and let cool. Before serving, sprinkle sugar over each tartlet, then use a butane torch (best…kitchen tool…EVER!) to brown the sugar. Top with whipped cream and wow your guests (who better darn well be Worthy)! 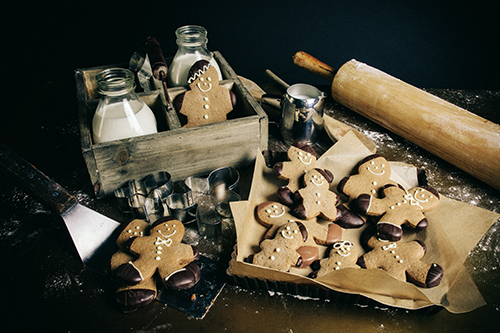 Cream the butter and sugar together (yes, cream…it’s a baking term) in the bowl of an electric mixer with a paddle attachment. Add the molasses and Stone Smoked Porter and mix until they're fully incorporated. Add the egg and—stop us if you’ve heard this somewhere before—mix until it’s fully incorporated. Add the rest of the ingredients and mix until just combined (you thought we were gonna say fully incorporated, huh?). Cover and chill the dough in the refrigerator for 1 hour. Preheat oven to 325 degrees. Transfer the dough to a clean, flat surface and roll it to ¼-inch thickness. Break out a gingerbread-man cutter and create your own miniature army. Place the gingerbread men on a baking sheet lined with parchment paper and bake until lightly browned around the edges. Remove the cadavers from the oven and let cool before decorating—we like using melted chocolate and icing, but it’s your world…be like Stone and do it your way! 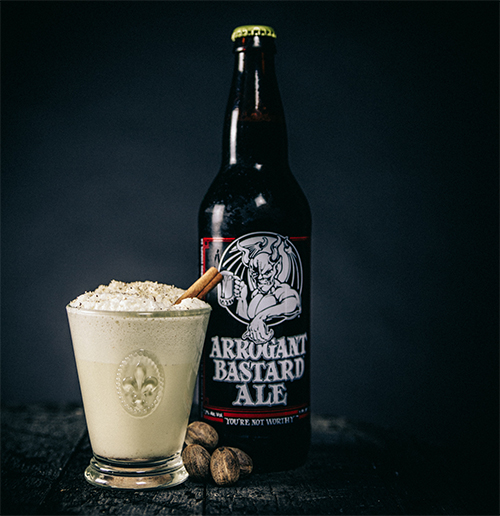 Yield: 8 servings | Based on original recipe from Randy Clemens

Place the egg yolks, vanilla and ½ cup of the sugar in the bowl of an electric mixer with a whisk attachment. Beat for several minutes, until the yolks lighten up and magically double in volume. Add the remaining ingredients—except the egg white and the rest of the sugar—and mix until everything’s fully combined. Transfer the mixture to another bowl and forget about it for a bit. Wash the bowl and whisk, then place the egg whites in the bowl and start whisking them up. Slowly sprinkle in the rest of the sugar and keep whisking until thick and stiff. Gently fold the egg whites into the yolk mixture and chill. When you’re ready to serve, pour the nog into stylish goblets or your favorite form of beer glass, garnish with a little more nutmeg and go spread some beery holiday cheer.