If you read the blog, you know that Steve Via broke our keg line record a few weeks ago. Well, Keg Masta Steve isn’t the only one around here kicking ass and taking names. Our bottling line crew recently set a new record by bottling a staggering 137,088 12-ounce bottles of Stone IPA and OAKED Arrogant Bastard Ale (95 pallets and 12 cases) in one day! The previous record was 130,728 bottles (90 pallets and 47 cases), set on December 17, 2008, with each person clocking thirty minutes of overtime that day. Not only did the bottling line break the old record by 6,360 bottles, but they did it with significantly less overtime. 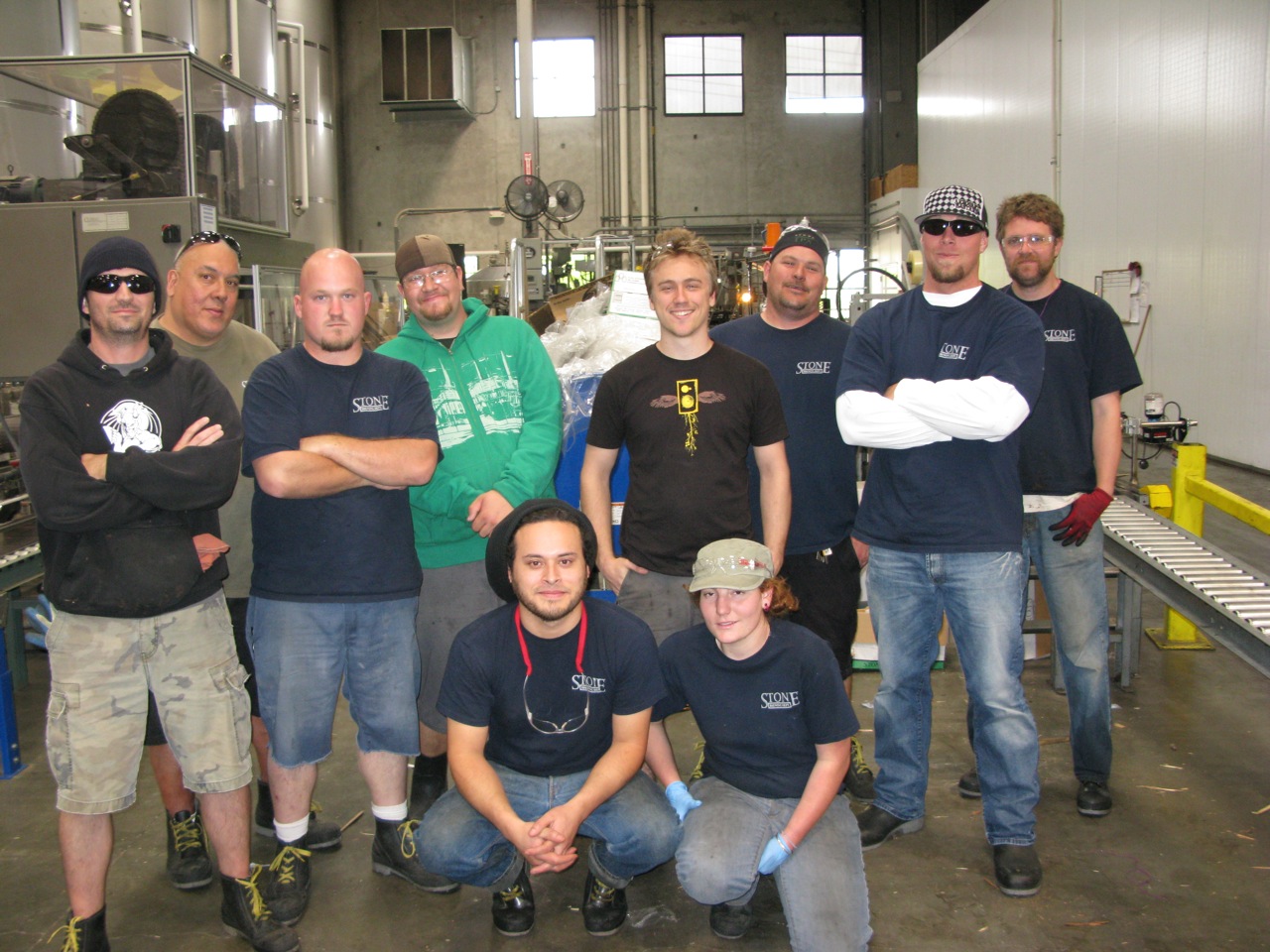 Our bottling line has come a long way since Ben Lee, our Production Coordinator, started on the bottling line over six years ago. “A 21,600 bottle day was a huge deal back in the day,” said Ben. Ben remembers having to place bottles onto the line manually, and then load them into boxes by hand after being filled. Bruised and swollen hands weren’t the only fun side effect. “We had to wrap our fingers in duct tape to avoid getting shredded by the bottle caps.” After one person loaded the bottles manually, another person had to stamp the boxes, load them onto the pallet, and repeat. 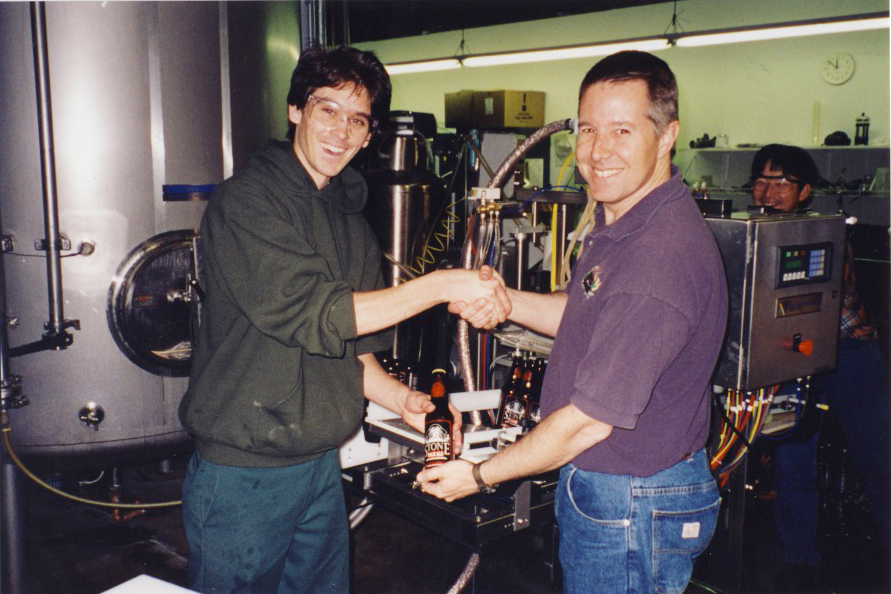 April 14th, 1999: Lee Chase and Steve Wagner celebrating our first ever bottling run, with Stone Brewer, Toshi Ishii (right) loading bottles into the "Maheen" bottling machine. Note that the "Maheen" is roughly the size of the three of them combined.

Though our bottling line was still pretty rudimentary during Ben’s days on the line, he was at least lucky enough to start right after we bought our first Filler machine. Before the Filler, we employed two old “Maheen” bottling machines (one for 12oz. bottles and one for 22oz. bottles), which required a minimum of two people to operate. We taxed the Maheens to their limit, running them for two shifts a day. “We were doing about 60 cases an hour with them,” said Stone President & Brewmaster Steve Wagner, recollecting the “rudimentary, highly manual” pieces of machinery. “We thought that was a huge amount of beer at the time.” 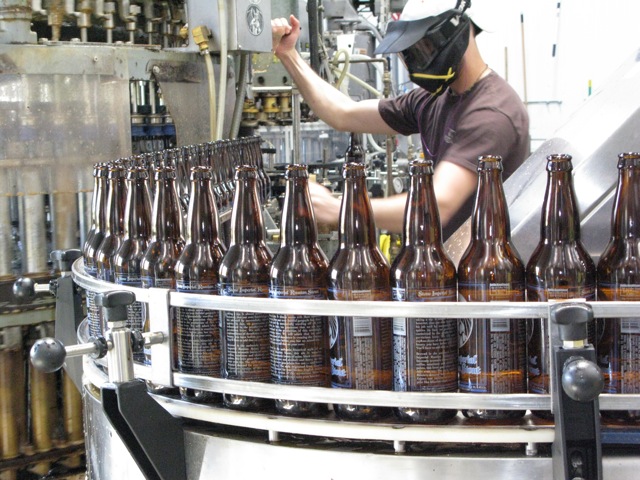 Bottling Line Operator Bryce Williams-Tuttle managing the Filler. About 3/4 of the machinery on our bottling line is used and/or refurbished.

A lot has happened since Ben or Steve worked on the line (most notably, the extinction of the dinosaurs). The crew has doubled in size, and the level of automation has increased exponentially. As mentioned before, we eventually installed a Filler, which we bought used from the Molson plant in St. John, Newfoundland. We acquired a second used filler from Pyramid Brewing on August 20, 2007, and later installed a Climax Uncaser and extra Accumulation Conveyors on July 19th, 2008. The newest addition to the line is a Slitter-Sealer machine, which we obtained from Abita Brewing in Louisiana. The gently used Slitter-Sealer was installed last Friday (the day after the bottling crew broke the record), and it makes the crews’ lives a hell of a lot easier. Instead of having to manually break tabs, fold, and seal about 20 boxes per minute, the machine will take over, sealing about 50 boxes per minute (once it’s running at full speed). Bill Sherwood, our Facilities Manager, likes the "chop-chop, flip-flap" action of the Slitter-Sealer, calling it a "Dr. Seuss kind of machine." 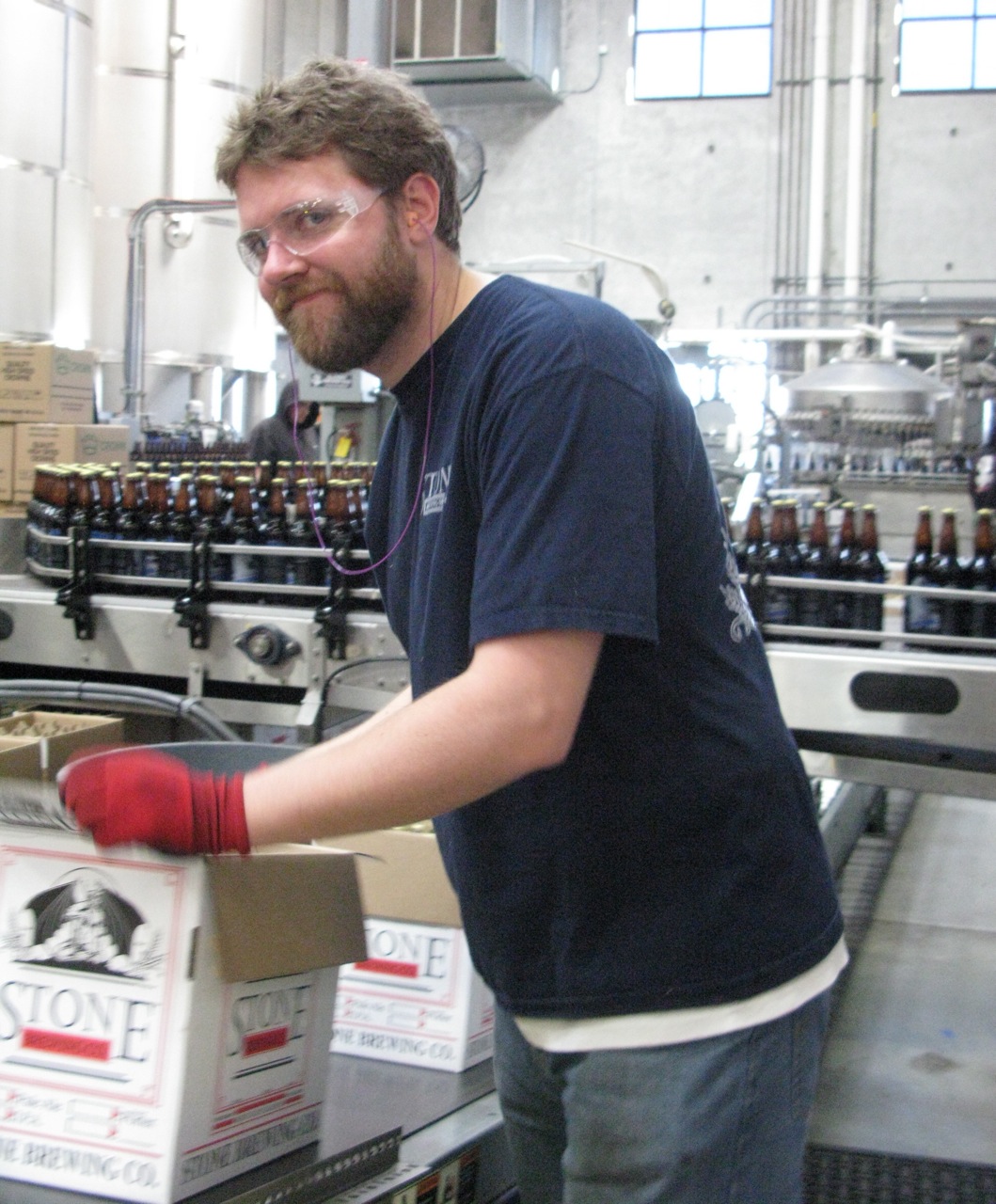 According to Packaging Supervisor, Kris Ketcham, breaking the bottling record was “a perfect ending to the last day that we will probably ever have to manually break box tabs, fold, and seal.” Breaking the record was indeed a fitting end to the last day ever manually sealing boxes—but not the end of the story. We’re sure our stellar bottling line crew will continue to rock our socks off, and we can’t wait until they reach their next milestone. -Matt Steele

And to have those milestones during the 10th anniversary of your first bottling run in April 99, that is very cool. Congrats Line Crew & Stone Brewery.