The Most Arrogant Bar in America

The title of “Most Arrogant Bar in America” is not a distinction we bestow lightly. We receive enthusiastic support from countless worthy establishments in all the vast reaches of this fine country, and we appreciate all the love. Really, we do. Sadly, there can be only one. Yes, that’s us for brewing…but in the world of Most Arrogant Bar in 2008, that distinction goes elsewhere. Enter: Boston’s Bistro & Pub in Dayton, Ohio. In a stunning performance, and for the second time in its illustrious history, Boston’s Bistro & Pub has snagged the title of “Most Arrogant Bar in America.” During the Most Arrogant Bar competition this past November, they served more Arrogant Bastard Ale, OAKED Arrogant Bastard Ale and Double Bastard Ale than any other establishment on the planet.  And they lived to tell the tale. We would like all Stone fans to join us in congratulating Dave Boston and his crew for another lively display of no-holds-barred Arrogance. Bravo, gentlemen. Bra-vo! 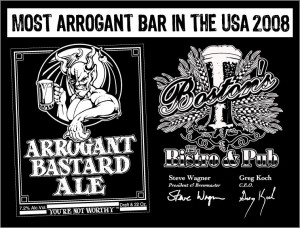 To celebrate this less-than humble occasion, Boston’s Bistro & Pub and Stone Brewing Co. are hosting a formal presentation of "Most Arrogant Bar" to Boston's on Monday, January 19. Stone’s own Martin Saylor will be on hand, along with 12 half-barrels of Stone beer, including some tasty rarities such as Dry-Hopped Double Bastard Ale (the first half-barrel of this incredible beer to EVER land in the state of Ohio) and Stone Imperial Russian Stout, which placed second on BeerAdvocate's list of "All-Time Top Beers on Planet Earth." The festivities begin at 6pm and go till 8pm. If you’re within driving distance and you consider yourself a bit on the Arrogant side, have your teetotalling neighbor drive you instead. Better that way. Check out the BeerAdvocate event page or Boston’s official website for more details. 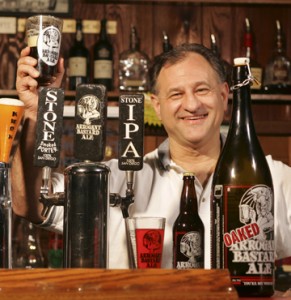 Dave Boston, proud proprietor of the "Most Arrogant Bar in America"