Wow, just when you thought we were done with our collaboration shenanigans for a while...we bring you the first ever Synchronized Beer Tapping event (at least we think it's the first--please don't check that with the Guinness book or anything)! Here's our grand plan: at precisely 4pm San Diego time and 7pm Boston time, we will be simultaneously tapping our very first kegs of BrewDog/Cambridge/Stone Juxtaposition Black Pilsner both here at Stone and at Cambridge Brewing Co. (CBC). What's so special about this, you ask? Several things. For one (and it's a really big ONE), kegs of this beer are an endangered species, and you may never see it on tap again--although occasional bottle sightings continue to be reported. Reason number two: Will Meyers, head brewer at CBC, tells us they pretty much never have guest beers on tap at their brewpub, so this is quite a rare occurrence. Reason number three: it's a damn good beer. Duh. 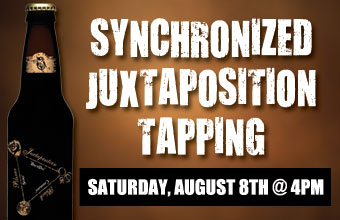 Joining Will at the New England portion of this historic event will be our own East Coast Regional Brewery Representative and general Cool Dude and Nice Guy, Michael Saklad. If you live in the area and haven't had the chance to meet him, you might want to seriously consider introducing yourself. When is it NOT a good idea to make friends with someone who peddles beer for a living? And to make Saturday even more memorable, Will tells us that alongside this beautiful black collaboration brew, CBC will also be proudly serving up some really stellar beers from the other two members of this team brewing effort. Here's what lucky Bostonians have to look forward to: 2007 Stone Imperial Russian Stout, wine barrel-aged 2008 Stone Old Guardian Barleywine, BrewDog Dogma, and whiskey cask-conditioned BrewDog Paradox. As Will says, "Obviously, we're super excited!" So are we, Will, so are we. And just in case you somehow have not managed to appreciate the gravity of the situation, just in case you're thinking, "Meh, I'll try some next time," ponder this: only 12 kegs of this black sheep of a beer were ever produced. TWELVE. As Ben Lee, our Production Coordinator, pointed out to me, that is the smallest number of kegs we've made of any of our beers in the history of us making beer. So this means that after we've finished the two we're tapping on Saturday, the two that will be pouring at CBC, the one we're sending to BrewDog, and one that some lucky Bastards down in San Diego already got their hands on, there will only be six kegs left in existence. Six. And no, you can't have them. -Kathryn Bouscaren