For eons the sun has perched brightly in the sky casting nurturing rays of light, heating our quaint little blue globe and making life possible. But every once in a while, we begrudge our beloved burning ball of gas for ruining the one thing many of us love most in life—BEER. Yes it’s true; UV light can skunk even the stoutest beers. Most astute brewers and beer drinkers are well aware of this, and take preventative measures to reduce the amount of light that penetrates their beer. If you’ve taken one of our brewery tours, you’ve no doubt heard us lambaste the ill effects of UV light on beer, making a point to mention that, unlike some breweries, we use dark brown bottles to counter this effect. While we do safeguard our beer against UV light, we actually embrace light (specifically sunlight) in another, more practical way. How's that? Two words: Solar Array. 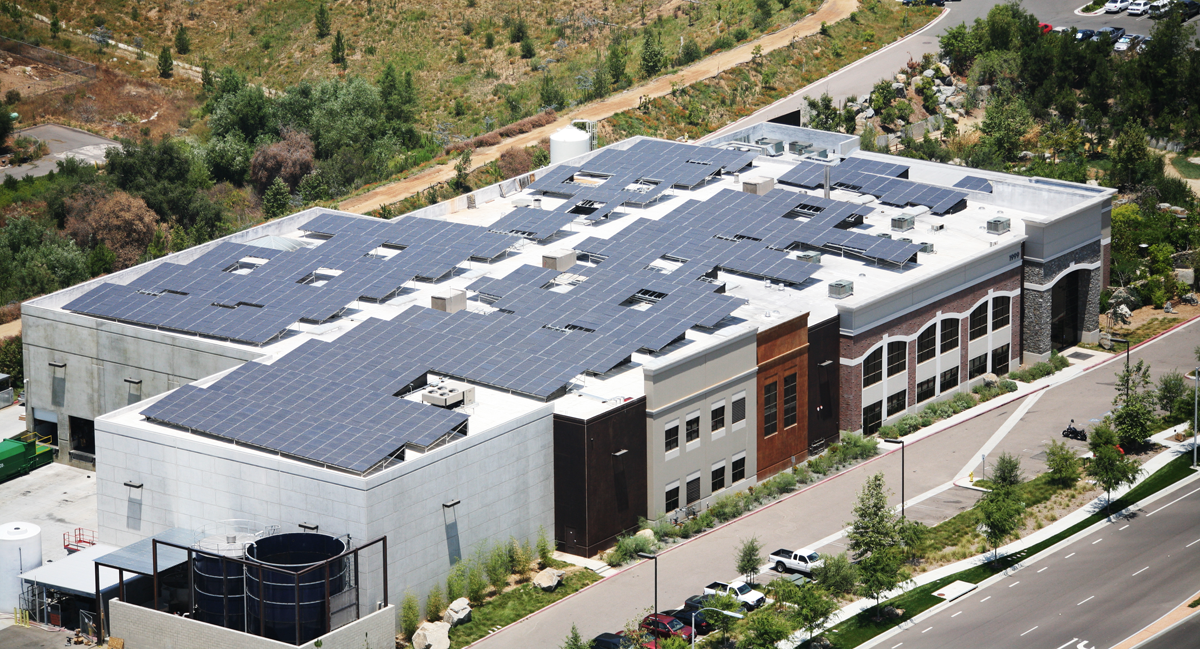 Back in February 2008 we had a 276.9-kilowatt AC photovoltaic solar panel system installed on the roof of our building. The $2.6 million dollar system includes 1,561 200-Watt Photo-Voltaic Modules, and produces about 30% of our brewery’s total electricity. 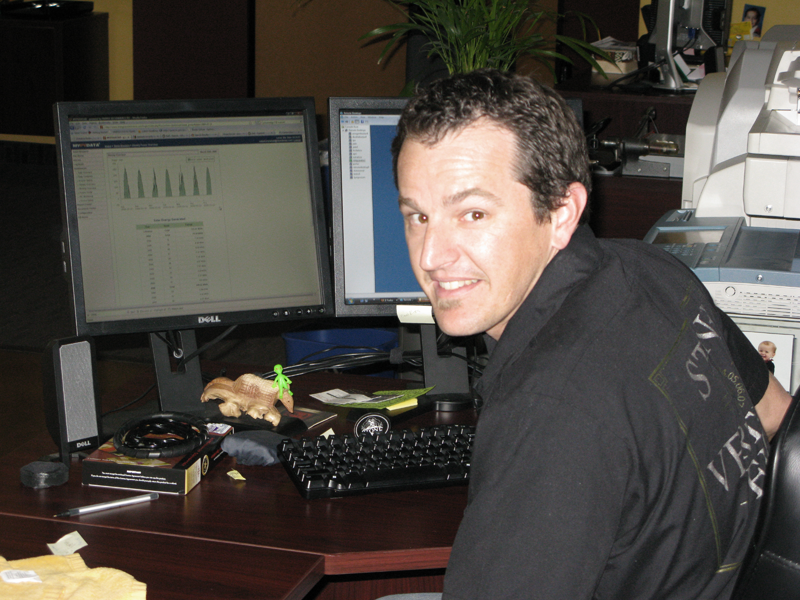 Although our system has a 331-kilowatt capacity, the amount of energy generated varies day to day, depending heavily on weather patterns and the amount of dirt build-up on the panels. Even with these minor limitations, our solar panels generate an impressive amount of energy. Rob Marshal, our IT Analyst, keeps track of our solar array data, and he provided me with all the juicy numbers. Construction on our solar panels completed in May 2008, but they weren’t operational until June 2008, and they weren’t fully online until September 2008. With that in mind, our solar panels generated 243,393 kWh (Kilowatt Hours) of energy in all of 2008. The panels have generated a grand total of 316,146 kWh over the past six months. 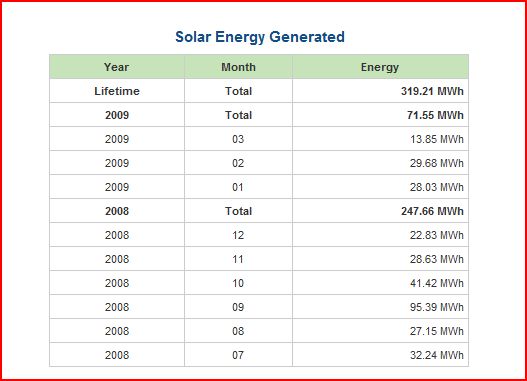 A screen shot from Rob's computer.

The most power that our solar panels have ever generated in one day is 1,739 kWh. That was back on September 2, 2008, an arguably sunny day. To give you some perspective, at that rate we could generate 10,656 kWh in one week, which would power the average American household for an entire year. Even more impressive, our panels generated 95,390 kWh during the entire month of September, 2008. On the other hand, cloudier, drearier months like February see a drastic dip in energy production. The panels generated 29,680 kWh in February, averaging only 1,060 kWh a day. This is a direct result of meager sunlight and dirt buildup over the lifespan of the panels.

Less stellar numbers for a gloomy February in San Diego

While solar power can be incredibly effective, it isn’t exactly the infallible cure-all for our planet’s energy woes. As mentioned earlier, it’s overly dependent upon clear weather, and dirt buildup is problematic. Not only is it time-consuming and costly to clean the panels, but the run-off doesn’t meet storm drainage standards, and we’re still working on a solution to this environmental catch 22. As you know, going solar requires a significant initial investment that may not start paying off for many years. In our case, we won’t start reaping the benefits for about 6-8 years. However, we’ve decided that the long-term benefits will far outweigh the initial cost. According to Hamann Construction, our system is one of the largest in the state, placing in the top 12% of solar systems in California, but we’re not the only brewery rectifying the once rocky relationship between beer and the sun. Sierra Nevada Brewery in Chico, California, recently installed a 1.3-megawatt solar power system which provides about 34% of their brewery’s power. As our industry continues to battle the dangers of dirty energy, breweries are exploring options beyond solar power to reduce their carbon footprint. Harpoon Brewery in Boston, for example, is taking advantage of the trend among utility companies to pay breweries for relieving stress on their grid by using less power. Making such seemingly minor changes as using more efficient light bulbs and installing light reflecting mirrors has saved them money and lifted some of the burden off of their local utility company. Measures like this, along with a myriad of government incentive programs, are making clean energy more attainable for small breweries. Of course, we had our fair share of help. Harnessing the power of the sun wouldn’t be possible without assistance from a few upstanding organizations. The California Center for Sustainable Energy (CCSE), a government program that offers incentives to homes and businesses for going solar, facilitated our participation in the California Solar Initiative (CSI), which was pivotal in assuring the financial feasibility of the project. Bank of America, with their innovative financing for green energy projects also played a crucial role. Lastly, our contractors Borrego Solar Systems, Inc. and Hamann Construction both did a fantastic job, and we’re very satisfied with the end result. Our push for clean energy represents another step towards sustainable design, which was our goal from the beginning. Our solar array, along with other conservation initiatives at our brewery and restaurant, helps us make great beer with minimal impact on the environment. Thankfully, we’re not alone. We’re proud to be part of an industry that is leading the charge for sustainable energy and environmentally responsible business practices. -Matt Steele

This is a fantastic article - the picture of the solar array alone is pretty amazing. It's fantastic both that you guys are so committed to this, and that your state government is so supportive and encouraging, catch-22 aside.

Out of curiosity, is Stone air conditioned?

Good job guys. I've always seen you as an environmentally conscious organization.
PS - The brewery is air conditioned. At least, it seems that way to me when I'm at the restaurant.

Nick - No, the brewery is not air conditioned. That's much too much of a massive space to even attempt it, besides, we have loading dock doors open most of the day. There's pretty good airflow through the space, so that definitely helps. In the restaurant, it's only air conditioned on the very hottest of summer days. Most of the time, we can simply open the big "garage-style" doors to the patio to help us regulate the temperature naturally!

Does anyone here have a solar pool heater or reverse osmosis system?

hopefully, we would be shifting more and more towards green energy in the future.":-

i think government funding should be diverted on the research of Green Energy and renewable power sources,-~

". . . we won’t start reaping the benefits for about 6-8 years." Actually as early as now the lesser carbon impact from your solar installation is benefitting our atmosphere greatly. At the very least, your building roof real estate has been put to good use and not merely bare concrete baking in the sun.

If many organizations have the same mindset as yours, the future looks green indeed.

even with the price drop, solar cells are still quite expensive if you want to get more than 500 Watts .