Sure, for Vince the trouble started back in 1999. It wasn’t easy to pull off his feats of onion ring heroics every year. Never a once did he complain. 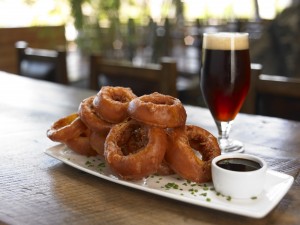 They look harmless, don't they? Looks can be deceiving...

So when in the summer of 2006 I sent Vince an email asking if he’d be cool with us using his Arrogant Bastard Ale Onion Ring recipe in our soon-to-be-opened restaurant, I actually felt a bit guilty. I mean, here’s a guy who had selflessly been working his butt off prepping, cooking and serving onion rings at our event for years for the benefit of the fest-goers and the charities and never gotten a thing in return other than accolades and words of thanks (he did get a lot of those). And now I had the gall, the audacity to casually email him and say “Hey Vince, would you be willing to share the recipe?” His response of course was a typical Vince-style “Wow, I’d be honored if you served Arrogant Bastard Onion Rings at your new place…I was hoping you’d ask!” What a prince of a man. A good friend through and through (and not just ‘cause of some onion ring recipe). Turns out though, there were some complications. See, we’d already set on the plan to use natural ingredients. Absolutely minimal-to-no processed stuff. This counted out anything with high fructose corn syrup (most sodas, condiments and a shocking array of other “food”stuffs), and quite a variety of other things. Our goal was to use real food as a starting point in our kitchen.  Not processed foods. Certainly, that took pre-fab onion rings off our list. True, I sometimes wonder at the sheer phat bank we’d rake if we used the incredibly profitable likes of stuff like this or this (“Selling Points: A healthy and delicious way to enjoy quality onion rings...”). This one is the best yet with a nicely done, but oddly disturbing video that you must check out (love those Matrix-style cascading dollar signs in the background of one shot!). You get the point. Hell, you probably recognize those industrialized rings from countless different restaurants you’ve visited. But we knew we’d have none of that. Instead of high profit prefab rings, we were going to buy expensive organic onions, spend the labor to hand peel, slice, dip by hand into batter that we make several times a week by hand, and monitor the deep fry baskets (no auto timing here…we do that by hand too). 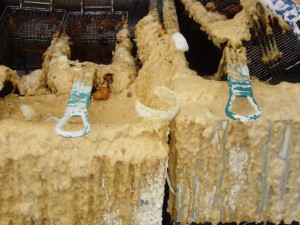 The aftermath of the Krusteaz batter. Did someone say Triple Bypass?

So back to Vince and those “complications” I mentioned above. It turned out Vince was using Krusteaz to make the batter. I don’t know why I’d always assumed that he’d been making his own batter, but he wasn’t. Hell, for that one-day-a-year gig, and with all the incredible amounts of work he put into it, I don’t blame the decision one iota. Not a bit. But when we looked at the ingredient list on the Krusteaz package, we realized it just wasn’t going to fit into the parameters that we set for the Stone restaurant. So we had to make our own.  Naturally (well, ‘naturally’ as you can possibly get for a batter for deep frying, well, anything). So we did. Fast forward to now. Arrogant Bastard Ale Onion Rings are one of the most popular items on our menu. Folks wax poetically about ‘em, make special trips for them, and can’t ever ever ever stop complaining about them. TO BE CONTINUED….Part 3 -Greg
Category:
Miscellany
TAGS:
Arrogant Bastard Ale, Arrogant Bastard Ale Onion Rings, Greg Koch, Stone Anniversary Celebration, Stone Brewing, Vince Marsaglia

That was hillarious nicely done. Brought back flashbacks. After the sheer madness of that day every year the events get stored deep within my subconscious and I wake the next day barely able to remember my name. I'm fine all year long as long as I don't see an onion ring or play frisbee or play with a hula hoop. Then I hear it Stone Anniversary party and I forget my name again and go into survival mode for that week only to emerge remembering nothing the morning after. Honestly I think about me only doing it once a year and the guys in the restaurant doing it every day. Do you employ a full time onion ring psychologist for those guys or is there a room in some crazy house filled with burnt out cooks mumbling arrogant bastard onion rings over and over. You guys have been great friends and I wouild not trade that for all the onion rings in the world Thanks for all the great beer too!!! Cheers Vince

Vince, you're a prince among men. And a King...nay, a GOD...among onion rings (and we sometimes find that our subjects rule us, eh!). You are a leader in the world of beer, and a legend in the world of pizza. To me however, I reserve the best title I could possibly think of, and am honored to say it: Friend.

Thanks for the great information, it was very helpful.