Some of our fans may have noticed that our Stone IPA has not had its usual bright, golden, clear appearance lately. We have seen it ourselves: we are having issues with ‘haze formation’ (AKA ‘chill haze’) in this beer…and even some possible occurrence of so-called ‘floaties.’ We thought it might be useful to present an explanation so that everyone knows what is going on. Some important things to know about chill haze and floaties: 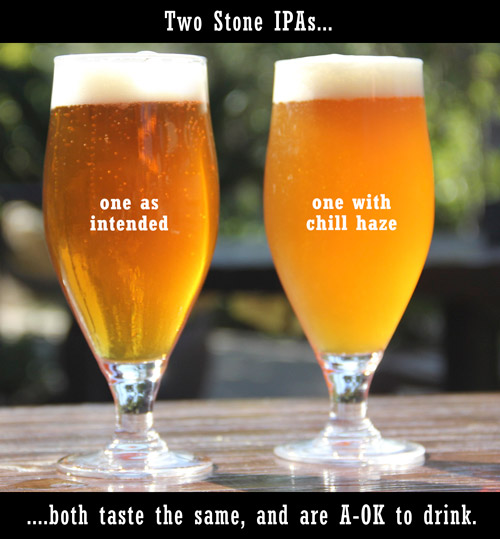 So, what exactly is chill haze? (Hold on…we’re gonna go in deep! If you're not interested in brewing science, it's safe to stop here.) The phenomenon known as chill haze is a colloidal haze that forms when proteins from the malt form a loose bond with polyphenols from hops. Without being overly technical [Too late Mitch! –ed.], this haze compound forms at colder temperatures (hence the name). And normally, when the beer warms back up, the haze disappears. You can observe this after you pour the beer into a glass and watch it clear up as the beer warms. Or take a bottle out of the refrigerator and let it warm up, and it will also get clearer. But eventually, especially if the beer is stored refrigerated (as it should be) the haze particles will not dissolve as the beer warms, and it then becomes known as permanent haze. Permanent haze tends to clump together in the beer and stay there. The scientific technical term for this permanent haze that clumps together is “floaties.” Normally, our beers do develop a little bit of haze as they age. This is perfectly normal, and nothing to be concerned about. However, we don’t like the amount of haze that is forming in Stone IPA right now. It is too much, and we are working hard to get the situation back to normal. We especially do not like to see floaties in our beer! Here are some things that we are looking at to resolve this situation:

We’re telling you all this because we don’t mind just laying it on the table.  Even though there’s zero flavor difference, we love the look of a crystal clear Stone IPA just as much as you do (and also realize the potential for a hazy one to be misinterpreted in our often over-sanitized and processed world).  Please bear with us as we work diligently to solve this situation, and in the meantime, enjoy your slightly hazy Stone IPA just as much as any other time.

A friend of mine who works at Total Wine noticed this phenomenon and claimed he could taste the difference, and demonstrated this to a group of us (he was right every time) while the rest of us were batting around 500. I suspected he was somehow cheating. Is it possible to taste the difference at all? When we asked what the difference was, he kept saying, "It's hard to explain...they're just different, somehow..." I call BS on him. Am I right?

Chill haze and floaties have no taste, so no, it is not possible to taste the difference. But as the blog post mentions, it can lead to some differences in the carbonation, which may be how your friend was guessing. But he was probably just cheating.

You could try one of our vibrating membrane filtration systems if you like. Happy to send you a pilot machine to play with--just let me know and I'll send one down to you. I'll keep drinking the Stone IPA regardless :-)

Is this an issue with the Japanese Green Tea IPA as well? I have lots of sediment/floaties in the 2 bottles I bought... Can provide a pic of the 1 remaining bottle if you'd like...

And here I thought "Chill Haze" is what happens when drink a 6-pack of IPA's while floating in a swimming pool. The more you know...

Mitch -
Great article, very informative and perfectly timed for us on the East Coast (started reading at 4:50 pm @ work). I believe it is time for nice chill-hazed, yet perfectly crafted IPA. The only question is, Ruination or Cali-Belgique?

Great post mitch. Chill Haze is something you get used to as a homebrewer. Thanks for all you share with the homebrewing community via the Brewing Network. I made the Levitation recipe you provided on Can You Brew It, and it turned out fantastic.

I actually like the chill haze in my Stone. We noticed it would form when the beer was really cold, so the haze was a good way of knowing just how cold the beer was. It's always delicious!

Great article about the finer points of chill haze. Thanks for posting!

Thankyou for noticing this problem and responding to us with an explanation. However it does change the taste of the brew when I sampled it, tasted stale and wheaty.

As mentioned in the blog post, chill haze is also more common in old beer. If a beer is past its expiration date, it may develop haze/floaties along with off-flavors. But fresh beer with chill haze should have no abnormal flavors.

great, informative article.
and i am a huge fan of your business model.

I first noticed it with the green tea collab if that helps. I have photos of it coagulating in the sun.

Informative article. Nice job informing your customers. Its good PR to disclose the issue and let 'em know your working towards excellence. Just so you know, Chill Haze doesn't bother me at all. Infact, I prefer it over a clear beer.

The alpha acid in the same family of hops can vary just from being grown in the New England are to say my area in Texas. Wheat beers were started because they had no way to seperate it from the barley while harvesting it as it grew wild in the fields. Hops were originally added as an antiseptic and now release bitterness evening sweetness, and towards the end of your batch add aroma. Unfortunately, slight variations can't be avoided.
Keep doing what you're doing guys no shame in a little chill haze!

I actually love the haze. It sort of differentiates craft beer from mass produced beers. Whenever I see floaties, my expectations for the beer rise. Either way, I love Stone's IPA, but I'd rather see it in it's murky goodness.

Regarding Stone IPA Green Tea. I don't believe what you are experiencing is chill haze. Green Tea IPA was bottle conditioned. If you are not pouring carefully and leaving the sediment behind you are dumping the yeast into your beer and this is causing it to be cloudy.

I find that chill haze forms when the beer is exposed to temperatures below 32 degrees. No taste difference??? The IPA is immediately spoiled. It will completely lose its nose in just a few days after the beer is "frozen" at 32 degrees. There will be a total loss of body and a very thin mouthfeel. The beer finishes with a gulpy swallow, slightly unsettling in the stomach. The beer continues to sour over time. The issue is preventing beer from reaching 32 degrees, either in the warehouse, delivery truck, or cold case. Likewise, the beer oxidizes every time it warms up and should be kept at a steady temperature below 50 degrees.

The 'More Brown than Black IPA' had a ridiculous amount of floaties too. (keep in mind I only tried one bottle.)