In a recent post, I discussed Baird / Ishii / Stone Japanese Green Tea IPA, a beer we’re brewing to benefit Japanese tsunami relief. You undoubtedly noted the bit about Aramis hops, a new hop variety from the Alsace region of France, which we’re using in that beer. For those of you that maintain an interest in all matters hop-related, we’re going to delve a bit deeper into the new hop varietal situation here at Stone. We work with several hop suppliers to keep us stocked with the bitter, aromatic flowers you all know and love. Occasionally, those suppliers will offer us a brand new hop variety, and if it sounds like the flavor and aroma is up our alley, Brewmaster Mitch Steele usually orders a little bit. This occurs infrequently because it can take many years and a significant amount of money to develop a new hop variety. Once the hops arrive at Stone, Mitch rips open the bag, gives them a sniff, reads up on their stats, then concocts a small-scale pilot recipe that prominently features the new hops. Depending on the results of that experiment, the new hops may be incorporated into a special release (the hops for our core line-up are pretty much fixed.) 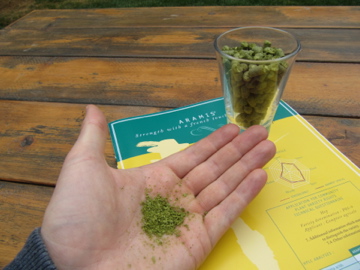 Aramis hops getting a close inspection

Which brings us to Aramis hops. As far as we know, we’re the first brewery to brew a commercial beer with Aramis. So what does it taste/smell like, you ask? I conducted an informal poll around the brewery and these are some of the descriptors I got: floral, earthy, woody, Earl Grey, lemon, hay, herbal. We then went a step further and did a taste test, which needlessly confirmed that eating hops—no matter what the varietal—is a terrible idea. But that’s not all folks! We have an 11-pound bag of Calypso hops—a fun-sounding newish variety—sitting in our cold box, and we recently ripped that sucker open too. Calypso is an American hop derived from Nugget and USDA 19058m (my personal fav) packing considerably more punch than Aramis. Calypso clocks in at 12-14% alpha acid (the chemical component in hops that contribute bitterness to beer), making it useful as both a bittering and flavor/aroma hop. 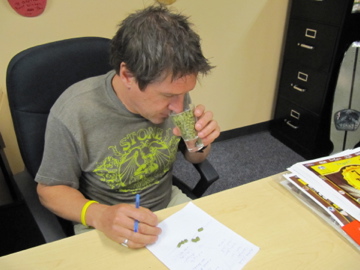 And what an aroma it has! Another informal brewery poll—conducted with a pint glass full of fresh hop pellets—netted these descriptors: lemons, tart apples, cherry blossoms, black pepper, bitter orange, mint, pear. The aroma is at once distinctly American, insofar as it is remarkably unsubtle and sappy, while also being very fruity, a combination unlike any other hops I’ve smelled. It was almost universally well liked by those polled. A 15-gallon single hop IPA is Calypso’s next stop. And there are still more new hop varieties to come. Columbia, Sonnet, Delta, and Bravo hops will all arrive in the next few months, giving us a remarkably broad new palette of hop flavors with which to experiment. Naturally, we’ll keep you updated.

The Calypso sounds intriguing. You guys are going to love Bravo, its a danky beast!

I think it would be awesome if you did a limited release batch of single hop IPA's to highlight each new hop. Kind of like Sam Adams did with their Latitude 48 IPA Deconstructed release. Let the public decide which they like the best and incorporate those into future brews. You guys are masters of the IPA as it were and I think if anyone could pull this off, Stone most definitely could.

Looking forward to hearing your thoughts on Sonnet. I've been tempted to pick some up from HopsDirect. I've had some pretty good beers with Delta, Calypso and Bravo so far.

@Sean Mikkeller has been releasing a bunch of single hop IPAs. Pretty cool to try the different varietals like that.

Seconded on the notion of doing a Sam-Adams-style six-pack "hop-off" or something similar.

Sounds interesting. I've used Bravo and Delta before. There's a newbee arriving on the scene soon from Autralia called Galaxy. Strong Pineapple and mango aromas apparently. Keep a look out...

Aramis and Calypso both sound fantastic. I'm intrigued and look forward to trying beers brewed with both.

I can't wait to see what Stone makes of the Calypso! I've had the chance to try the a brew with Calypso from two brewpubs... And now that one of my favorite breweries is using it, I'm getting even LESS sleep.