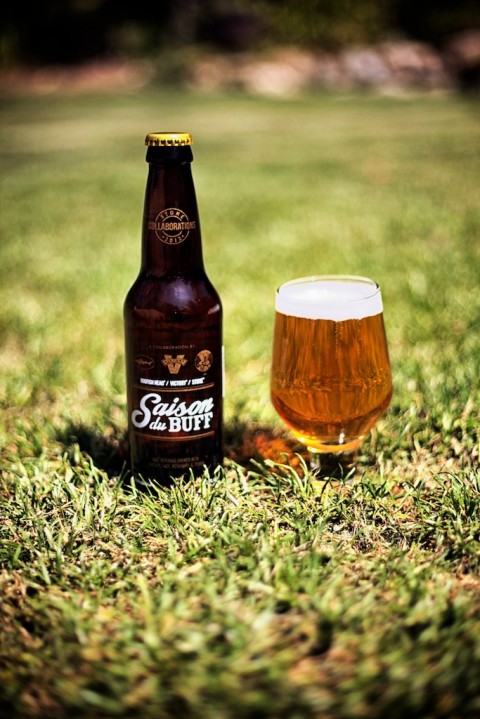 Well, besides having a great time chatting and drinking beer, Wil at one point asked if it would be possible for us to share the homebrew recipe for Saison du BUFF. While Greg and Sam discussed it, I reminded Greg from off-camera that it was already available, courtesy of our amazing book: The Craft of Stone Brewing Co.: Liquid Lore, Epic Recipes, and Unabashed Arrogance! </plug> And that we'd also of course be more than glad to share it on our blog.

Well, here I am, making good on our word! Sorry it took so damn long; I'll totally take the blame there. Feel free to watch the video archive of the hangout below... It's about an hour long, so make sure your boss can't see your screen you're in the comfort of your own home with a little window of time to enjoy a beer while viewing. And if it inspires you to try making your own batch of Saison du BUFF, now you've got the recipe. Let us know how it turns out! (Samples mailed to my attention at the brewery are also welcomed.)

Is this a complete guide to homebrewing? No way. Is it a recipe you can use alongside such a guide? Absolutely.

I can’t stress it enough: clean and sanitize everything.

In a 10-gallon brew kettle, combine the crushed malts and flaked rye with 4 gallons of 163°F water. The water should cool slightly when mixed with the grain. Cover and hold the mash at 149°F for 2 hours. For safety’s sake, set up your propane burner outside. Set the brew kettle of mash on top and heat to 160°F, stirring frequently to avoid scorching. Turn off the heat. The mash will continue to increase in temperature to about 165°F.

After mashing is complete, carefully transfer the mash to the lauter tun to separate the liquid (the wort) from the grains. Run a length of vinyl tubing from the lauter tun to the brew kettle. Let the first few quarts of liquid run through. It will be cloudy and contain some undesirable particulates. Once the liquid coming through is clear, stop the flow and pour the cloudy liquid back into the lauter tun, where the husks from the crushed grain will act as a natural filter and help remove the sediment.

Allow the remainder of the wort to drain into the brew kettle at a slow, steady rate, restricting the flow with a plastic crimp on the tube. Once the liquid is lower than the level of the grain bed, begin the sparge by slowly sprinkling 5 gallons plus 1 cup of 168°F water over the grains. The sparge water, which should never exceed 170°F, is added to the grain and allowed to drain off at a slow rate (regulated by the plastic crimp), extracting the remaining sugars and maximizing yield. This is not a step to be rushed; be prepared to spend at least an hour on lautering and sparging. Once the last of the sparge water has filtered through the grains and the flow from the lauter tun stops, you’re ready to begin the boil.

Set the brew kettle of wort on your outdoor propane burner and add water to bring the wort level up to about 6 gallons plus 12 cups, if needed. Bring the wort to a rapid, rolling boil. As it begins to come to a boil, a layer of foam and scum may develop at the surface. Skim it off and discard. Once the wort is at a full boil, put a hops bag containing the Centennial hops in the kettle and set a timer for 90 minutes. Stir the wort frequently during the boil, and be watchful to avoid boilovers. At 15 minutes before the end of the boil, stir in the Irish moss.

When the boiling time is over, turn off the heat and put a hops bag containing the Amarillo hops, parsley, rosemary, lemon thyme, and white sage in the kettle. Cover the kettle and immediately begin cooling the wort quickly. Place the brew kettle in a large sink, bathtub, or cooler partially filled with ice water. Place your sanitized wort chiller in the wort and run cold water through it until the wort comes down to 70°F.

Pitching the Yeast and Fermentation

Once the wort has cooled to 70°F, discard the spent hops and herbs and check the specific gravity of the wort with a hydrometer. The target starting gravity is 1.059 (14.5 Plato). The yeast should be removed from the refrigerator about 2 hours before use so it acclimates to room temperature. Slowly pour the cooled wort into a sanitized primary fermentation bucket. Stir vigorously with a sanitized spoon or carefully shake the fermenter (sealed of course) for about 10 minutes to aerate the wort. Shake the container of yeast, add it directly to the wort, and stir vigorously to combine. Cover the bucket with the lid, fitted with the proper stopper and an airlock filled halfway with water.

Place the bucket in a cool, dark place and keep it at 70°F. Signs of primary fermentation should be evident after about 6 to 12 hours. Let the wort ferment until the bubbles coming from the airlock have slowed to a rate of about one per minute. This can take anywhere from 4 days to over 1 week. Once this occurs, it’s time to transfer the beer to a (sanitized) glass carboy for secondary fermentation. Attach a length of (sanitized) vinyl tubing to the (sanitized) racking cane, and carefully siphon the wort into the carboy, being careful to leave behind the sediment at the bottom of the plastic fermenter. The vinyl tubing should extend to the bottom of the carboy to prevent splashing. While oxygen is crucial for the yeast at the beginning of fermentation, after that you want to minimize the wort’s exposure to it.

Put the Citra hops in a hops bag and place it in the carboy. Seal the carboy with the drilled stopper and an airlock filled halfway with water and ferment at 70°F. After 7 days, dry hopping is complete. Remove the hops bag and discard the hops. Check the specific gravity of the beer. If it’s reached the target final gravity of 1.007 (1.8 Plato), it’s ready to bottle. If not, allow it to continue fermenting at 70°F until it reaches the target.

When you’re ready to bottle, be sure to clean and sanitize the bottles, caps, bottling wand, racking cane, and tubing. Put the dried malt extract in a medium saucepan and stir in just enough water to dissolve it. Bring the mixture to a boil over high heat. Remove from the heat, cover, and let cool slightly. Pour this mixture into a clean, sanitized bucket with a spigot.

Once the bottles have been filled, cap them using a bottle capper (or simply close the tops if you’re using swing-top style bottles). Store properly in a cool, dry place for 2 weeks so the beer can properly carbonate. Cheers!