A Deeper Dive into Hops

You’ve heard about hops. You know when they go into wort and what dry-hopping is. Heck, you even know they grow on bines, not vines! But do you know the how and why hops act the way they do in beer? Why they turn bitter and why they oxidize? We’ve gathered a wealth of knowledge in our years of brewing bitter beers...and we’re all about sharing the wealth. We’ve talked about the top-level usage of hops before, and now we’re going to dive into the anatomy of these cones. 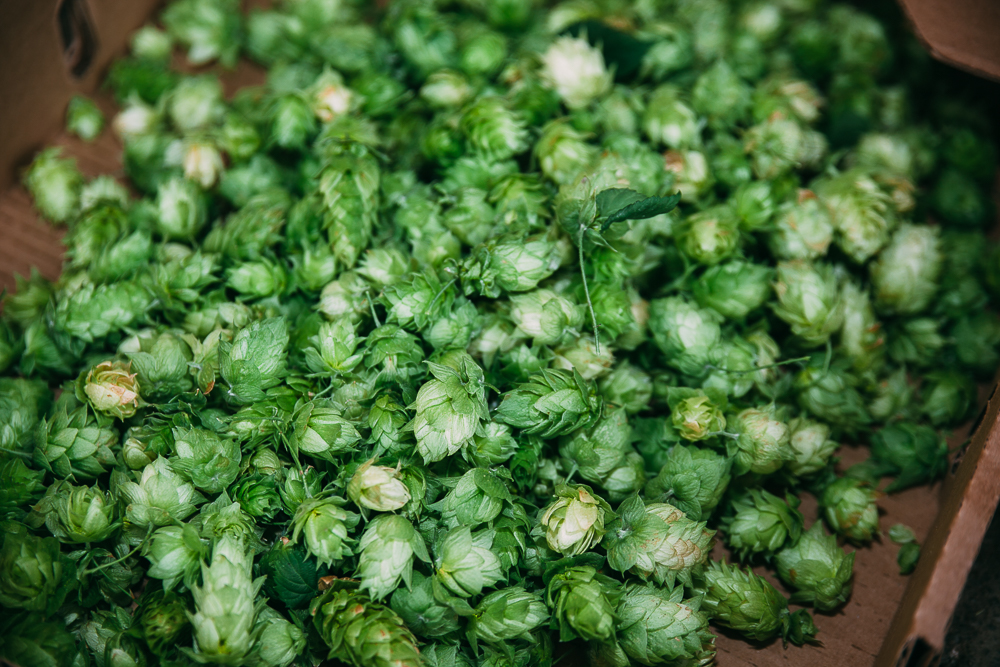 Much of what makes hops so distinct comes thanks to compound acids. There are two main acids in hops that affect beer. Alpha acids are one of the more commonly talked about compounds in hops because they impart the bitterness we’ve come to know and love. During the boil stage when most hops are added to the wort, the alpha acids begin to isomerize and disappear pretty quickly. That is, they break down and form iso-alpha acids when heated up, contributing to the bitterness of the beer. Common alpha acids are humulone, isohumulone, cohumulone and three other –humulones that aren’t as prevalent.

Beta acids, while equally as important, are the other less commonly talked about compound in hops. They break down much slower than alpha acids and don’t isomerize during the boil. Instead, beta acids contribute mostly to beer’s aroma. And while we’re on it, IBUs (International bitterness units) are equal to one milligram of iso-alpha acid per liter of beer. (#themoreyouknow) 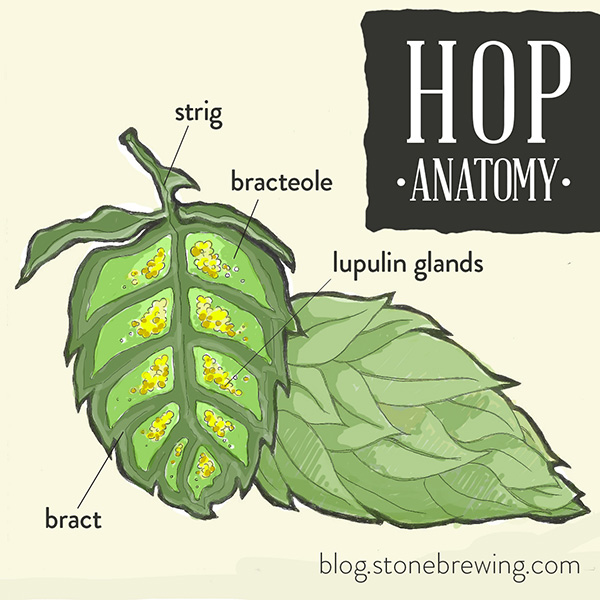 Essential oils are the other part of what makes hops so diverse and versatile, making up a majority of the oils in hops. They are found in resin in the glands of hops. There are three oils that contribute to the myriad of hop characteristics. The first is Myrcene and is the most plentiful of the oil composition in hops. Myrcene is very volatile in air, and contributes greatly to that beer smell. It’s in several other plants as well, including thyme, lemon grass, verbena and parsley. Hops with high levels of Myrcene are often described as “citrusy”. Humulene is another essential oil and is the quintessential “hoppy” oil, contributing lots of woody or spicy flavors to beer. Most noble hops have a higher percentage of Humulene in them (which is consequently why hops are called Humulus Lupulus). Caryophyllene is the third most prevalent oil in a hop.

There are other essential oils in hops, but they don’t make up a significant portion. Caryophyllene is a spicy, earthy, sweet oil that also contributes to a beer’s “hoppiness”, and degrades quickly when exposed to heat and air. Depending on the hop, varying levels of these essential oils will impart different characteristics. Levels of these oils will also vary from crop-to-crop year due to weather conditions and other factors. So there is some variability in hops, but chances are the average palate won’t detect the difference in percentages. 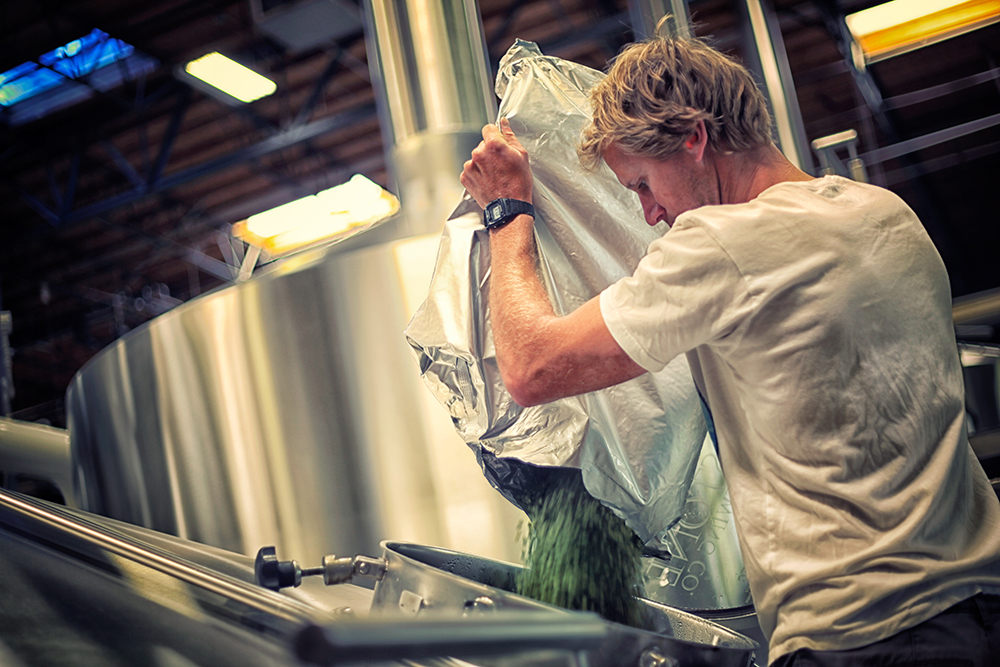 All of this sounds well and good, but how do these acids and oils react in beer? The boil kettle plays a huge role in imparting hop oils and acids into beer. For alpha acids, the longer the boil, the more other bitterer iso-alpha acid come out. (The term bittering hops makes more sense now, doesn’t it?) The later these hops are thrown in, the more aromatic they remain. So selecting when to add hops at the boil stage is very important in determining the resulting bitterness. Both acids and essential oils change over time, though (which is why we harp on fresh beer). Oxidation is another term that gets thrown about in regards to hops. Oxidation is a constant process from the birth of a beer to when it gets drunk. Beta acids are largely responsible for the off-flavors akin to creamed corn or rotten vegetables often found in old beer. They break down over time as opposed to alpha acids, which break down quickly during the boil. But when the bitter alpha acids fall off, they leave behind a musty or cheesy flavor. Essential oils degrade fairly fast and also contribute to the “wet cardboard” flavor sometimes found in old IPAs as well as other hoppy beers. 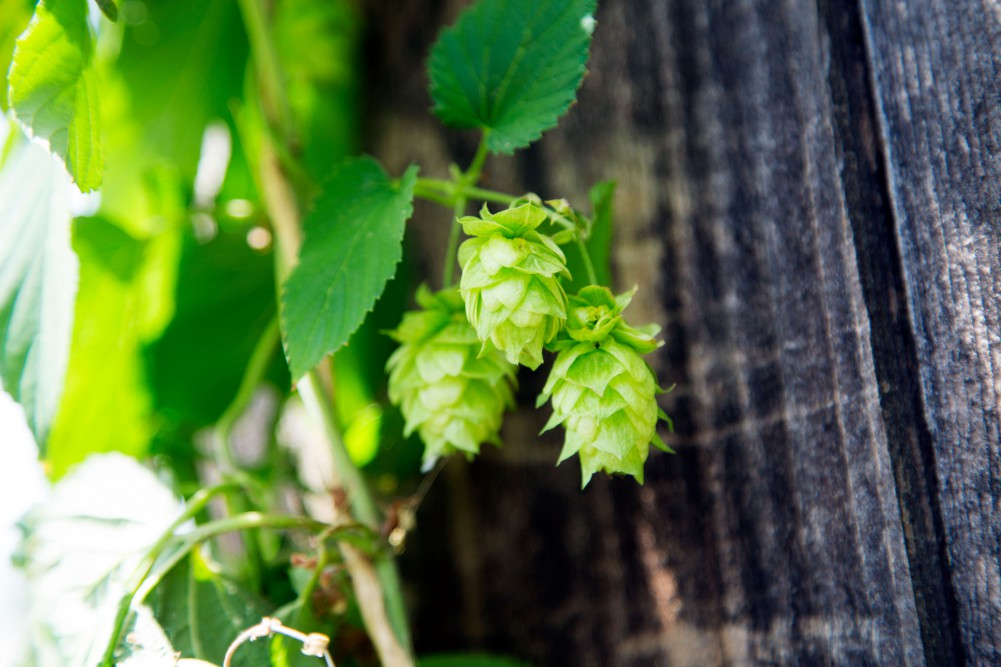 So there we have it. A deeper dive into what makes hops into what they are and how each part contributes to the profile of beer. There are more acids/oils/factors that make each hop into its own distinct variety, but we’ve covered the major components and this should be plenty to help win you a few bar bets.