April Fools' Over the Years

​​This is part of our series of posts looking back
at our 20 years of true craft.

Find out more about our history at Stone20th.com

Over the years we have taken great delight in pranking our fans on April 1. Usually, it centers on announcing something akin to selling out or poking fun at the parts of the industry we consider less than stellar. Here’s a quick prank retrospective:

This is the press release that started it all. Stone EXTREME LemonyLime poked fun at the up-and-coming “malternative” beverages of the time, which - to put it kindly - attracted a rather undiscerning consumer. To quote our press release…

“The company expects that the core consumer for Extreme LemonyLime will be in the very influential 21 to 21-and-a-half age group.”

Our CEO & co-founder Greg Koch approached me with a press release he had written over the weekend on April 1. Seriously Greg? I quickly changed the Stone IPA label, adding some garish colors and “Extreme” to the name then gave it the tagline, “It’s Freshtastic!” We quickly shot it out the door to our 5000 some email subscribers and spent the rest of the day wandering back and forth to each other’s desks laughing and asking, “Did you see that last email?” 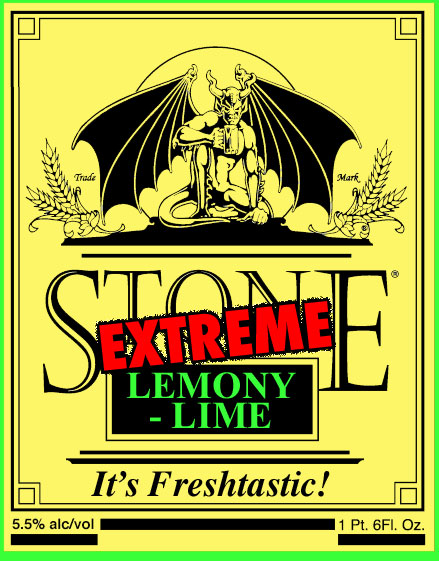 Some fans were truly bummed out:

"This is a bad idea. I like your beer because its a mans beer full body and a s**t load of flavor. This beer sounds like it is for p***ys and it is for QXP (quick extra profit) and that sucks because that is what companys that dont give a crap about there customers. I hope that this is only a trial thing and you decide to stick to making beer not QXP."

Others were a little savvier:

"For a minute there I thought you had really flipped out, until the release date of this news item sunk in. Thanks, it cracked me up and I had a good laugh out of it."

In any case, we knew this was going to be a tradition at Stone.

"Stone Monolith" poked fun at a certain beer retailing beyond any reasonable price with elaborate packaging that had nothing to do with the beer, squarely aimed at seeing how much beer lovers were willing to spend.

“We still think it's a good way to help some real hard-core beer enthusiasts part with their cash and get some free media attention to boot. Let's be real here, this is not about taste or quality or value. It's about collectability.”

Most of our fans saw this coming, and weren’t easily duped. Even years later, we were contacted by media outlets looking to write about what they thought was a general interest piece about the world’s strongest beer and “ballers” wanting to get a bottle. 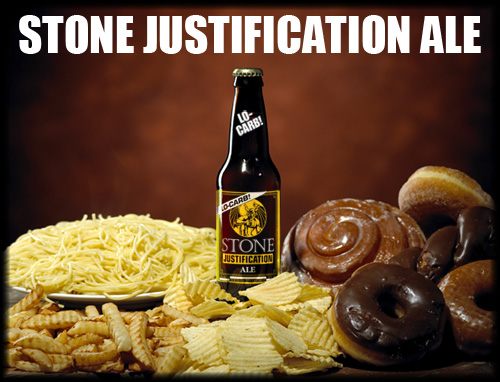 "In Stone Justification Ale, we have created a beer with an extraordinary depth of flavor lightness," exalted Stone Brewing Co. CEO Greg Koch. "One might think that the near-nonexistence of carbs in the beer would lead to a similar non-existence of flavor. However, we're going to tell people different. In fact, much of the deep, rich, satisfying flavor of Stone Justification Ale comes from the way we describe it, which adds no carbs at all! "

We got quite a few people sucked in with this one and added a testimonials section to allow the savvy fans to add in “real” comments. 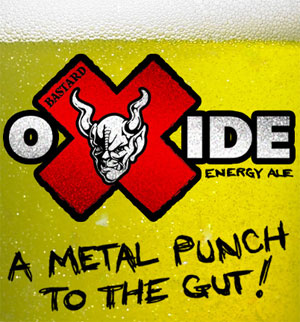 In 2006 malternative alcoholic beverages with caffeine, ginseng and other stimulants were cropping up everywhere. Our offering to those who desired to be up all night while dulling their senses and better judgement was Bastard Oxide.

For the photo shoot, we needed to come up with a glam shot that include the look of the beer. The concoction we put in the pint glass was Mountain Dew, liquid dish soap, glitter and a generous amount of backlighting to ensure a color hue that Mother Nature wouldn’t want to take credit for. The detail of glitter suspended in high-fructose corn syrup and glycerin made a great background for the press release.

This was actually an April Fool’s double cross. James Watt from BrewDog, Will Meyer from Cambridge Brewing Co. and our Brewmaster Mitch Steele came together to brew the very real BrewDog/Cambridge/Stone Juxtaposition Black Pilsner. Since this was such a highly unlikely beer and we saw April 1 was coming up, we couldn't resist playing with public disbelief. 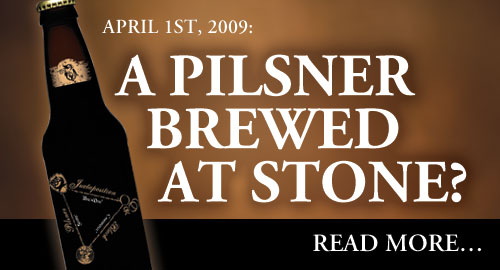 Those who took the time to read more than the headline realized this April Fool's Day posting was pretty darn elaborate and specific, and also sounded like one amazing Pilsner.

James from BrewDog and Greg have their own special wavelength and connection that nobody else can break. It might also be a wavelength that others cannot receive. During a visit to San Diego the two of them became tickled pink by how funny of an oxymoron “golden stout” was. While drinking in Greg’s backyard they recorded some footage which was brought into Stone Monday morning and weaved together into this:

The last laugh was had by Stone Liberty Station Brewing Manager Kris Ketcham, who brewed a golden stout at Stone Brewing World Bistro & Gardens - Liberty Station in 2014. It was true to the beer James and Greg described—golden in color with a viscous, flaked oats-aided mouthfeel and coffee-driven dark roastiness. The beer was so popular on draft that we decided to release it in bottles nationwide by the name Stochasticity Project Master of Disguise.

Much like BastardOxide poking fun of alcoholic energy drinks at liquor stores and gas stations, there was a new target for this undiscerning market –pouches of distilled beverages at checkout stands. We see beers and spirits as something to be appreciated and shared socially, not to see it sold at a cash register as if it were a commodity like a single dose packet of pain relief pills.

BastardSHOTZ took the concept of a pocket of hooch and went the other way with it, to make it into something classy—an even more absurd premise. “Oozing all the flavor and alcohol of a 22oz. serving of Arrogant Bastard Ale, reduced to a classy, airport-friendly 3-ounce pocket pouch.” The result was described as a “thick brown gel” that pairs well with wild acorn-fed  Jamón ibérico de bellota (a $220/lb ham).

It was our first prank that centered around a video and the idea of a canned beer with a helium instead of a nitrogen widget. Rick Blankemeier, Stone’s QA manager, gave a perfect straight man interview about the scientific aspects of Cr(He)am Ale. Then the video hit its punchline when Rick took the first sip and started talking in a high pitched voice.

The result was hillarious. Strangely, Boston Beer Co. put out a video with the same joke that day as well. It was a bit of a bummer to see our efforts duplicated, but we were more astonished by the slim odds two breweries would arrive on the same helium joke on the same day.

When we launched the Stochasticity Project, who would have thought it would end up being the launchpad for a viral video? We certainly didn’t. In practice, this prank was a joke hidden in a joke. For years, Greg has been an outspoken critic on the value of cans, so with speculation swirling that we were building a canning line we knew that April 1st would be the perfect time to prank Greg, fans, and naysayers alike that we were launching a canning line. But the question remained, how do we do it without people taking us too seriously? That’s when we thought about a nitro can…which morphed into a widget can, that instead of nitrogen, housed helium. Inspired by Christopher Guest we set out to make a “straight” beer launch video that…well…watch it and see for yourself.
- TYLER GRAHAM, Digital Marketing Manager

Still, the public’s fascination with the idea of a helium beer didn’t wane. We got inquiries all the way into May the next year, and it gave Rick a chance to give some scientific reasons why this just wasn’t possible:

As I write this, we’re in our 20th anniversary here at Stone. We’ve been working hard on doing throwback photos and I’ve kind of taken up being the company historian. Through my searches of archives, I arrived on a screenshot of the Stone website I created that I had sent to Greg in 1997. The part that made this screenshot so great was that I got the original Netscape Navigator window in the shot as well. I shared it with the team and was immediately asked if I had a copy of the original site. I said yes, and we had our April Fool's prank. So there you have it, by the time you’re reading this, you should have already seen our new website replaced by code and graphics from 1997, a site that looks very strange on modern devices (most phones exceed the original resolution). Keep in mind, I did this site on a shoestring budget at the age of 19 when breweries typically didn’t have websites. It certainly is not my best work, but with the context of when I made it - I’m still proud of it. 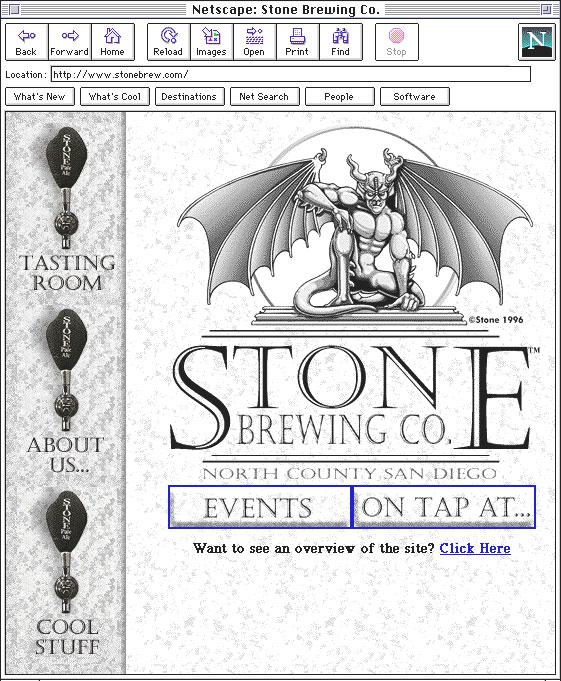 So that’s the end of our April Fools jokes for now. There’s several jokes we’ve been talking about over beers that have yet to see the light of day. We’ll see what the future holds in store for our unsuspecting fans...