Stone Embraces The Spirit of Aloha

When I think of Hawaii, I think of the usual clichés: tropical beaches, hula dancers, sunburned tourists with fanny packs, coup-d’états by fruit corporations (true story), and pit-roasted pork. I certainly don’t think of craft beer. However, I’ve never been to Hawaii, so I realize my cartoonish perception of the islands is almost completely influenced by clever marketing campaigns and ill-informed pop culture references (Brady Bunch Goes to Hawaii, anyone?). Truth is, Hawaii does have great beer (as evident by Maui’s CoCoNut Porter & Kona’s Pipeline Porter), but all of the exotic flavors of the islands are under-represented in craft beer. Thankfully, talented homebrewer and Hawaii lover, Ken Schmidt, is helping to change that.

Remember when Ken won our March Madness Competition at our AHA Rally with his Aloha Plenty Porter? Well, we were stoked to brew with Ken and replicate his decadent creation on a larger scale, and Greg got the bright idea to invite Garrett Marerro from Maui Brewing Co. to join in on the collaboration and bring his CoCoNut Porter brewing expertise to the table. Garrett agreed to come on board, and thus the beer officially became Ken Schmidt/Maui/Stone Kona Coffee, Macadamia, Coconut Porter.

As Mitch started converting the recipe, he was blown away by the ingredients required. Not only were they going to be ridiculously expensive, but he had no idea where he was going to get 1,000 lbs. of coconut, 300 lbs. of macadamia nuts, and 200 lbs. of 100% Kona Coffee. The easy answer would have been to use cheap extracts and adjuncts, but as you know—we don’t take shortcuts. Fortunately, Garrett hooked us up with the same distributor that his company uses for ingredients, and gave us some pointers on how to toast the coconut and make sure the right amount of flavor is imparted into the beer.

Our collaborations are usually between three brewers, but this time there was a fourth player that deserves some credit. Our Bistro team put in some long hard hours toasting 1,000 lbs. of coconut in our relatively tiny oven in the Bistro Kitchen, a process that spanned four eight-hour shifts. When Garrett heard of the Bistro staff’s contribution, he cringed and said “I hope someone’s buying those guys beers!” 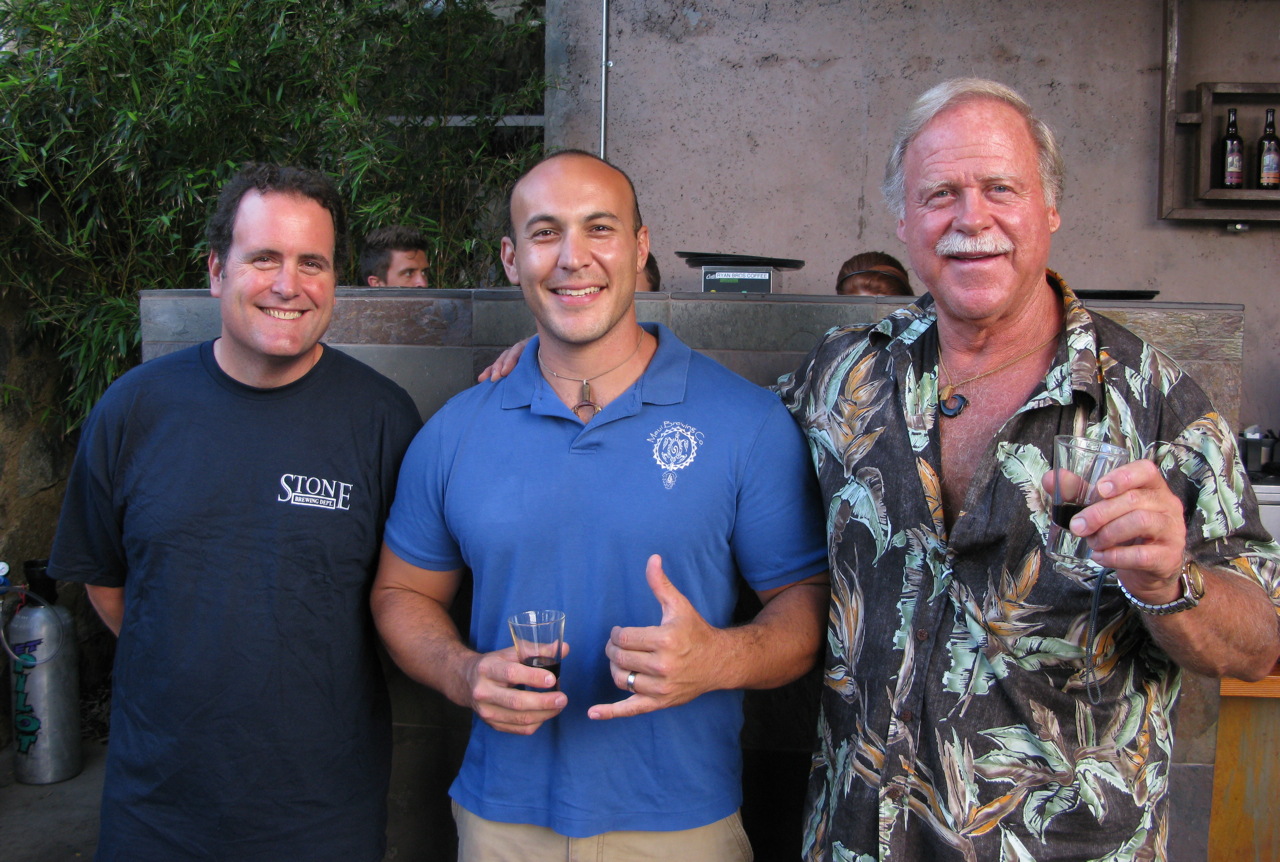 After spending several weeks accruing all the rare ingredients, it finally came time to brew the beer on June 29th. However, preparing all the ingredients took way longer than expected, and we even came up short on steeping bags (think giant tea bags). In the true spirit of collaboration, Garrett enlisted the aid of another local brewery to resolve our steeping bag shortage: “I said ‘Hey call Green Flash,’ and sure enough they had a bunch they could lend to us, so we went and picked ‘em up. We wouldn’t have been able to get the coconut and the coffee and everything in there if we hadn’t gotten those bags, so the collaboration reaches really far beyond just us.” 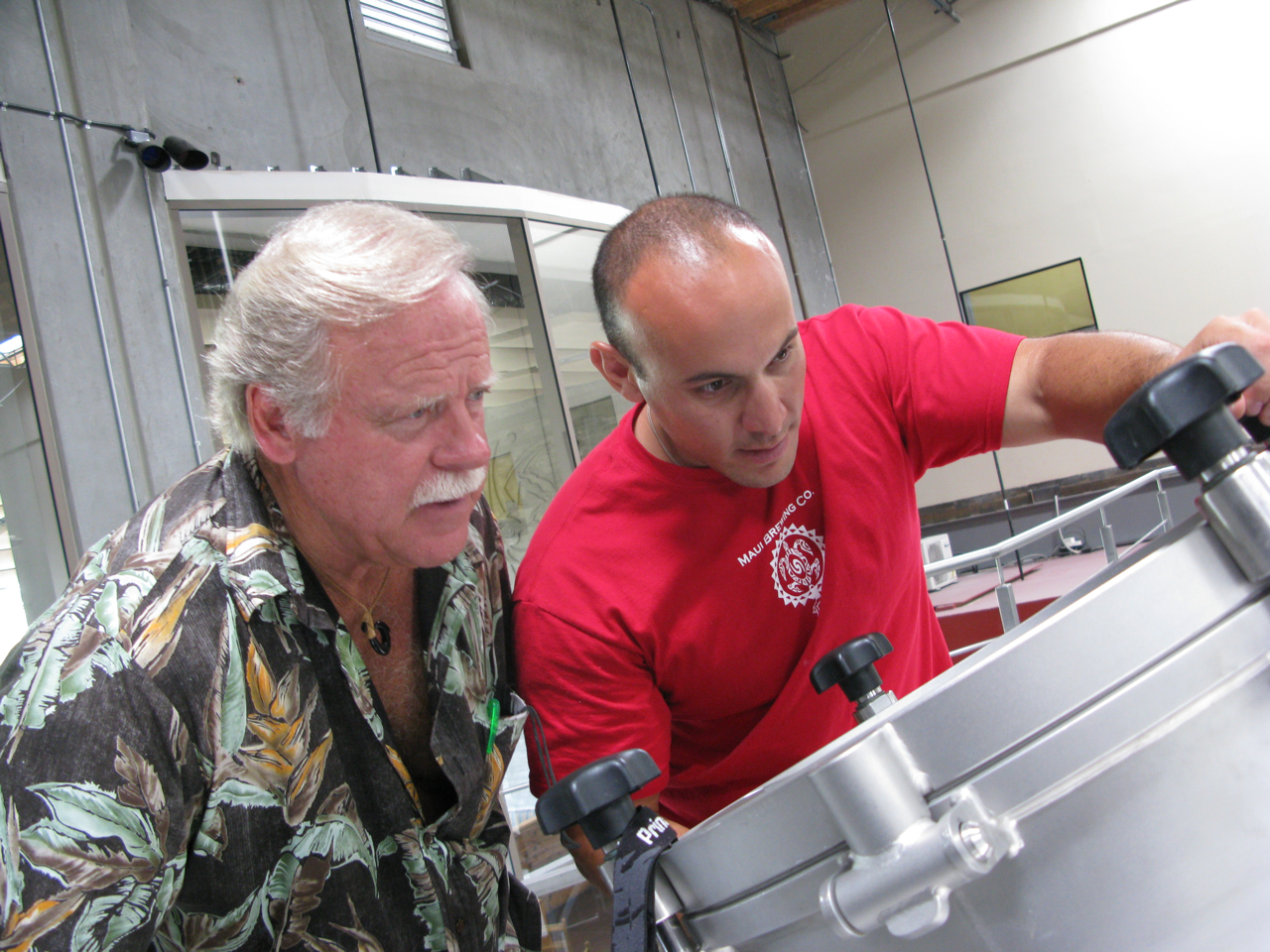 The brewers decided to load all 22 steeping bags into the whirlpool, which resulted in a near-comical, yet delicious display of flailing steeping bags full of ingredients tethered to the manway, flopping around in a tangled mess as they bestowed their delectable flavors upon the beer. Despite a few minor hiccups (and a hell of a time removing the incredibly heavy saturated steeping bags), the brew went through the brewhouse spectacularly and is now fermenting. So what happens next? According to Mitch, the beer will go through a dry-hopping process of sorts, in which more Kona Coffee, macadamia nuts, and toasted coconut will be added to the beer post-fermentation. 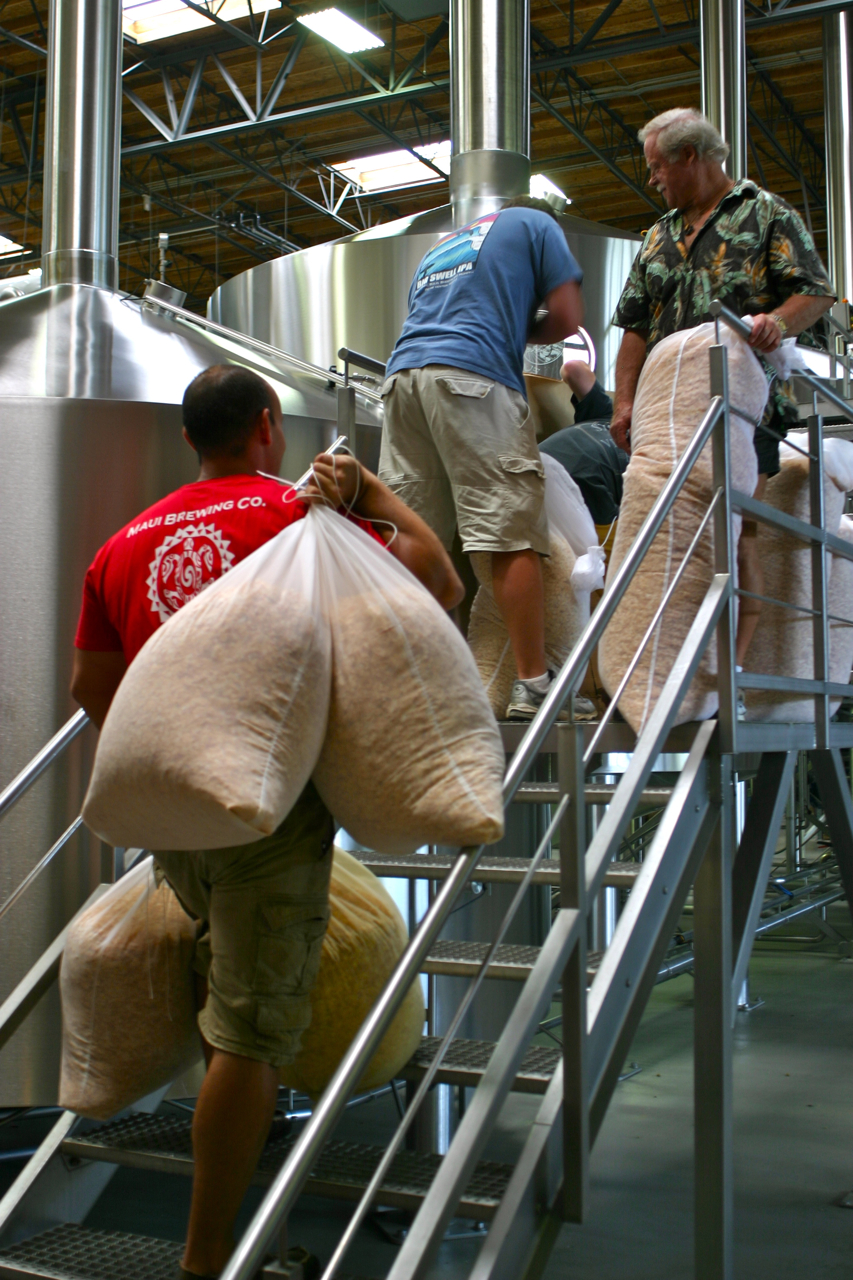 Garrett, Ken and crew hauling the steeping bags full of rich ingredients up to the whirlpool

Ken Schmidt/Maui/Stone Kona Coffee, Macadamia, Coconut Porter is unlike anything we’ve ever brewed here at Stone, and Ken, Garrett, and Mitch all had an awesome time brewing it. The day after brewing, Ken seemed to have an excitement hangover: “It’s one of those rare days in a person’s life that’s really extra special, and when you’re coming down you can’t quite take it all in quick enough.” Expect to see Ken Schmidt/Maui/Stone Kona Coffee, Macadamia, Coconut Porter on shelves in late August or early September.

I hope this one makes it to Texas. We've been getting more Stone special releases here and this one sounds delicious!

Will this be available in Maui anytime between September 7th-September 15th?

Man, that sounds like one heck of a brew!

I cross my fingers and hope that at least some bottles find it's way across the Atlantic and way north to Sweden. We need those island coconut flavoured porters to warm up! :D

And good thing Ken has that shirt so my personal "ill-informed pop culture references" don't get banged up! ;)

I'm typing this from North Shore Oahu (Turtle Bay), but when I get back to Mira Mesa I hope to find this brew soon!! Cheers!!

Congratulations on the well-deserved honor to brew your awesome recipe with the big boys. Hope to be clinking a glass of this nectar with you soon!

Sounds ono to me!! Glad I live here in San Diego so I can get my hot little hands on some of this brew!!!