We can see the headlines now: Stone makes another IPA! The world is shocked at such a divergence from a company that hardly ever explores hoppy beer styles. Yes, that’s sarcasm! Obviously, no one will be shocked to discover we’re making yet another aggressive IPA. We’ve never tried to hide our lust for hops. Heck, we freely fly our hophead flag. But we’re sure the question will arise. Stone has already made a bunch of IPAs, so why make another. Isn’t the already lupulin-obsessed market saturated with hoppy beers? And who says the world needs another IPA, anyway? We do! 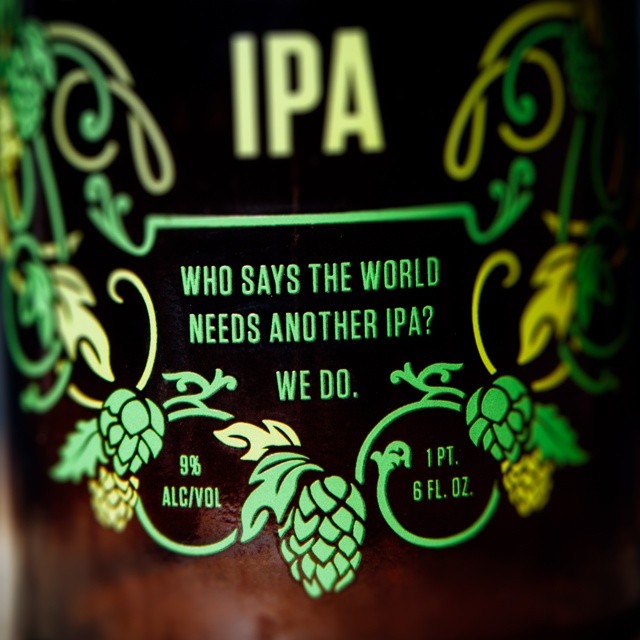 While unified by botanic-borne bitterness, every India pale ale is different, especially nowadays! With so many breweries opening and such an increased demand for more and more hops, the farmers who supply the craft beer market are working overtime. Not only are they jamming to grow as much of the most popular varietals—Cascade, Centennial, Amarillo and the like—but, since there’s only so much of those big-name hops to go around, they are also breeding new types of hops with flavors both similar and worlds away from those IBU fiends have come to crave. Staying ahead of the curve on those new additions to the hop family bine is both challenging and fun. Some of the biggest trends in hops, like Citra and Mosaic, were identified by experimental batch numbers not too long ago. Experimenting with hops holds a great deal of appeal for craft brewers—especially us. New varietals provide the opportunity to creative something completely different, and that is immensely exciting! 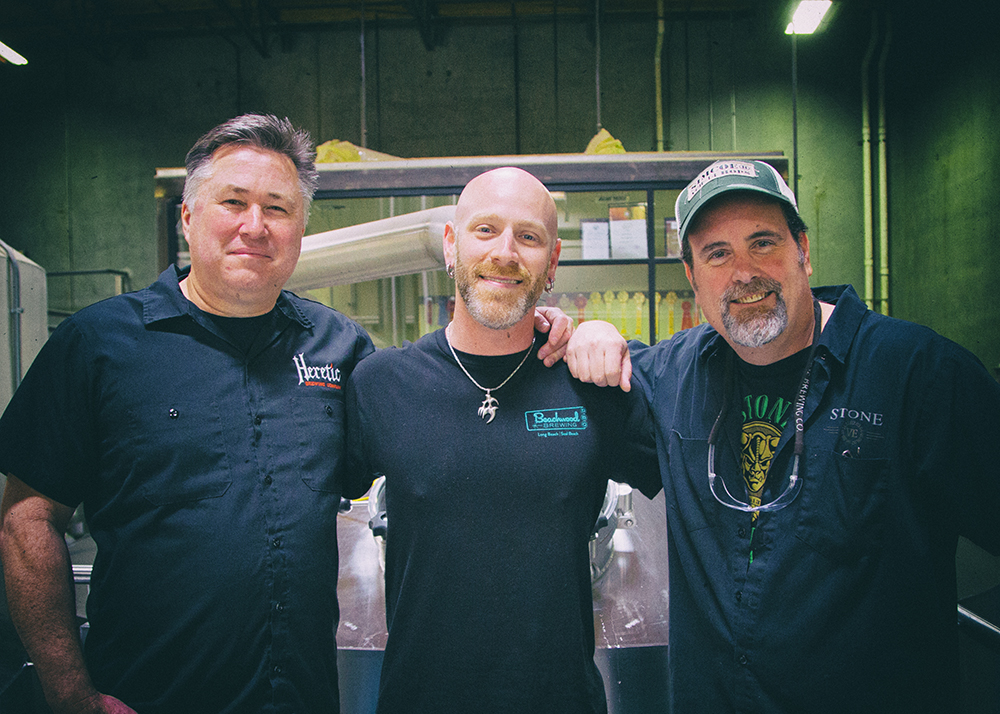 That sense of adventure is shared right along with a thirst for incredibly hoppy beer by two collaborators hand-picked by Stone Brewmaster Mitch Steele to bring our latest collaboration brew to life—Heretic Brewing Company Brewmaster Jamil Zainasheff and Brewmaster Julian Shrago of Beachwood Brewing. Mitch worked with Jamil on a collaborative triple IPA brewed at Heretic’s Fairfield brewery, and liked the viewpoint he’d bring to the process. There were some preliminary talks about what type of beer they should create, but nothing was exciting enough that it stuck until Julian came on board. At that point, with three lupulin-infatuated brewers known for their expertise with hoppy ales, it was clear that the only way to go was a double IPA. As interesting as these guys are, what made this brew especially remarkable was the quartet of brand new, experimental hops they utilized for Beachwood/Heretic/Stone Unapologetic IPA.

All four of the hops used in the dry hopping hail from Washington. Neither Mitch, Jamil or Julian had scarcely used and, in some cases, never even tasted some of them. Belma and Azacca weren’t completely foreign, but yet-to-be-named HBC 342 and Hopsteiner 06300 sounded more fitting to a sci-fi novel than a beer. What they all have in common are citrusy, fruity, tropical notes. The biggest question in all of this was how the experimental hops would turn out during the whirlpool and dry-hopping processes. Thankfully, some of the initial savory notes fell off to reveal more of the hops’ citrus and subtle earthiness. Jamil suggested using biscuit malt as a specialty malt on top of the base bill, to give the beer a stronger backbone for the hops to contrast with. It ended up lending breadier flavors to support the coconut nuances brought on by the Hopsteiner 06300. The result is a bitter yet fruity DIPA with strong notes of melon and tropical fruits. The casual beer drinker may not notice all of the subtle differences in these hops, but craft beer geeks who are often heard waxing poetic about the melon, pine tree, onion or garlic notes in their beer, are sure to fall for the unique complexity of this brew. That’s who our brewing trio were catering to with this beer—curious hopheads just like themselves. Beachwood/Heretic/Stone Unapologetic IPA was tailor-made for people who want to be on the cutting edge of craft beer. Yes, it’s another IPA, but it’s anything but just another IPA; innovative without being confused or convoluted. We know how many IPAs are out there—we’re responsible for a great many of them after all—but there’s always room for another one, so long as it’s good…or great…or mind-blowingly spectacular. Beachwood/Heretic/Stone Unapologetic IPA is most certainly the latter. 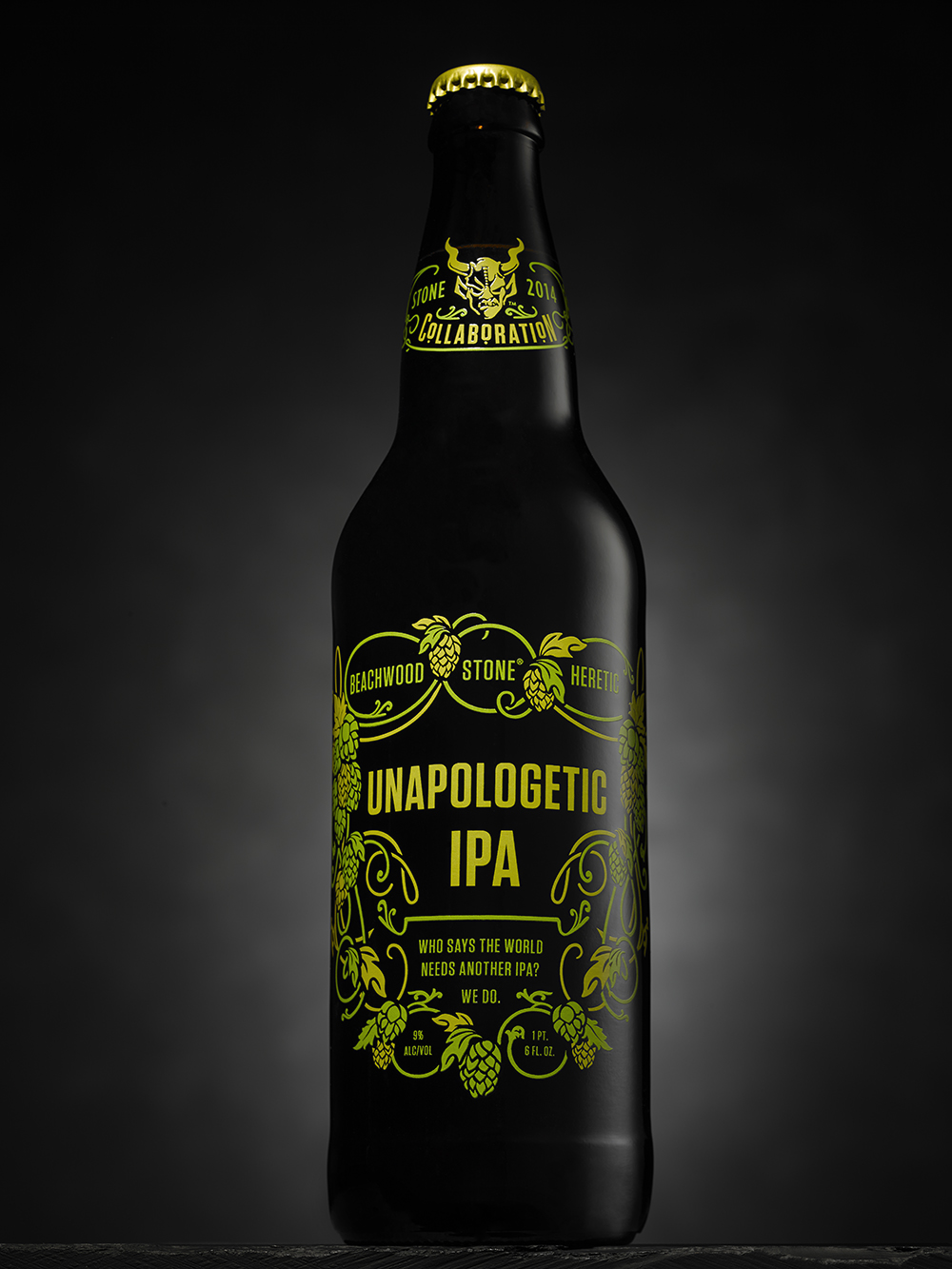