Before setting forth on my most monumental dissertation, let me first address the members of the virtual peanut gallery who read the title of this post, snicker and instinctively feel the need to scroll down to the comments section to point out that the subject of this communique is not five words, but in fact four words. The laws of hyphenates are iffy, but one thing is for certain—those words are powerful. They’re what brought you here in the first place…Bourbon Barrel-Aged Arrogant Bastard. 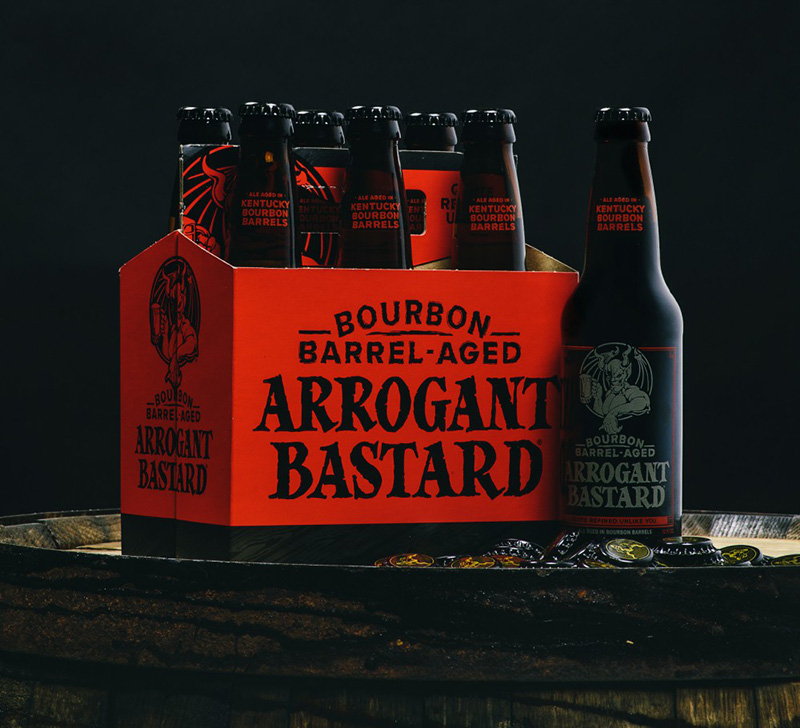 And if these words haven’t piqued your interest…first off, what are you even doing here? Furthermore, seriously, what in the name of all that is just and right in this world is wrong with you? Bourbon. Barrel. Aged. ARROGANT BASTARD! If skimming these words in sequential succession doesn’t set you to drooling all over your keyboard (or smart-phone…one doesn’t get to be the omniscient, unilaterally accepted benchmark of the best the brewing industry has to offer without remaining in touch with technology), it’s simply because you haven’t had the pleasure of making my acquaintance. Well, either that or your puny palate is incapable of registering the thrush of extreme hop and malt expression provided by yours truly. If so, it’s OK…I guess. From the beginning, I’ve been straight with those who would dare step to my unadulterated awesomeness, warning them they probably couldn’t take it. If you are a member of this camp, now is the time to hang your head and hit the BACK button or simply close out your web browser in a huff. Either way, you needn’t waste time reading the rest of this, because—believe you me—you CAN’T handle it! 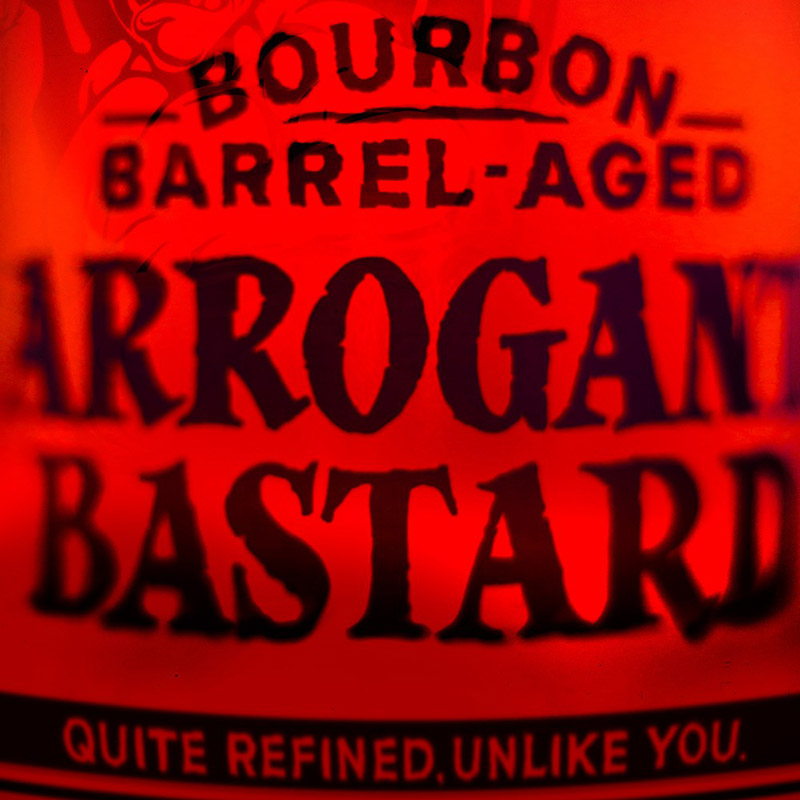 Mine is an illustrious and outspoken lineage that includes offspring like Double Bastard Ale and Lukcy Basartd Ale (haven’t heard of them…Google them and prepare to have your mind blown). Those who love me harbor similar, if not greater affection for these bold, bawdy characters. And I’m good with that. Being self-confident enough not to fret about popularity contests is part of wearing the crown as the king of beers. (Notice I didn’t tag that title with a trademark symbol. It wasn’t conjured for me by some Madison Avenue fat cat or marketing think tank. Instead, it has been given to me by droves of devotees who voluntarily—and rather intelligently—spread the gospel of craft beer via the glories of the brew responsible for their adoration of that noble artisanal medium…me!) As such, I’m not only fine, but rather elated to be the first to introduce you to the newest member of craft beer’s royal family—Bourbon Barrel-Aged Arrogant Bastard. 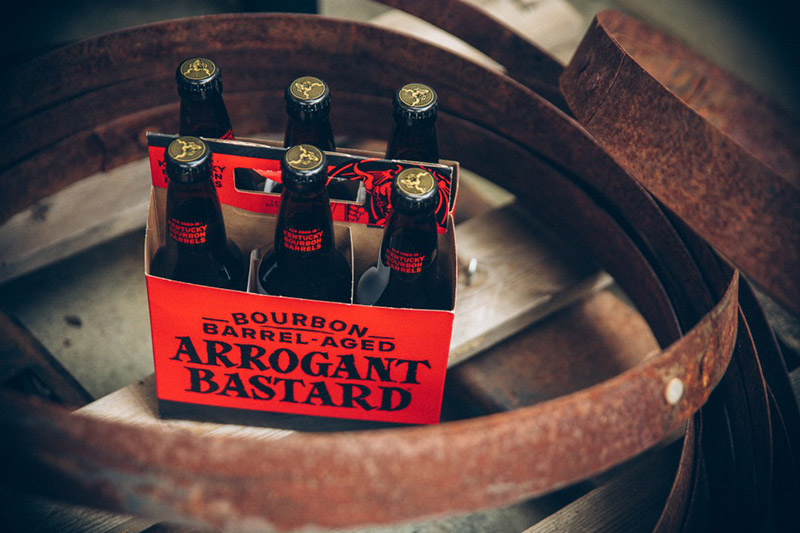 Yep. Bourbon extracted during a slow, ponderous slumber in Kentucky bourbon barrels. You hear that and you undoubtedly think to yourself: Arrogant Bastard Ale infused with the rich, complex character of oak and bourbon…I wonder what that tastes like? But I don’t question and I don’t wonder. I get to the bottom of things, including whiskey-soaked oaken repositories. The result is something so magnificent it defies description. Lesser mortals will scoff at this, asking: How do I know if I want to try this beer if you don’t describe it to me first? But like me, fans of the Liquid Arrogance don’t sit by idly, imagining what something potentially life-changing would be like or begging for someone else to tell them all about it. They thirst for the adventurousness of discovering something unknown, tasting it for themselves and forming their own opinions. I wouldn’t rob you of that, for such thrills are rare in this day and age. But I will go so far as to assure you that if you are a fan of me, then you will find the same pleasure and solace in Bourbon Barrel-Aged Arrogant Bastard. 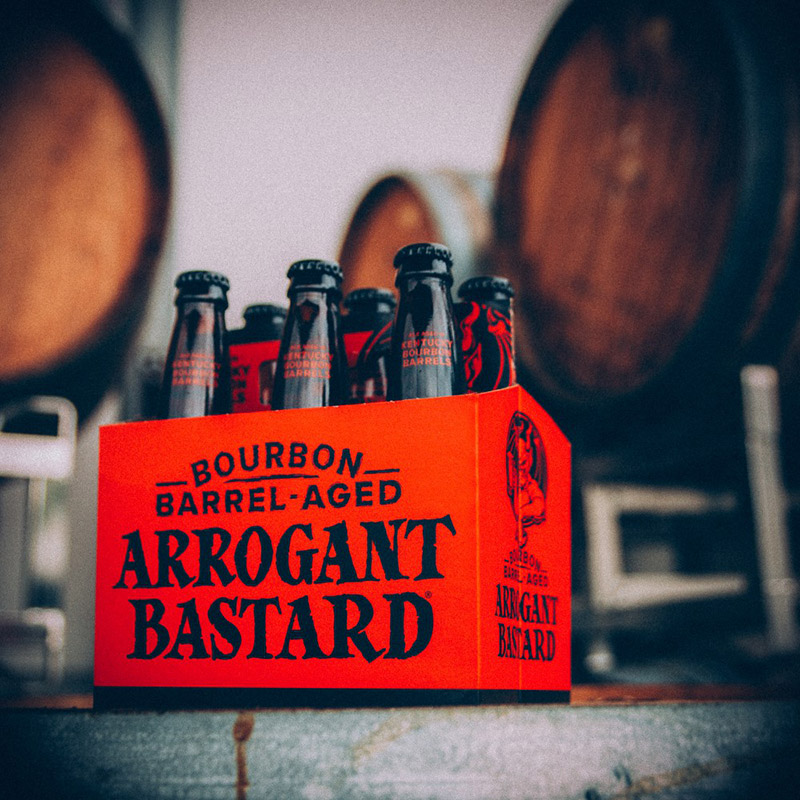 Because I know those who fit so snugly into the niche sliver of the population that gets it—that understands that, despite the fact so many lesser beers are golden in color, my family of burnt umber-hued ales is the gold standard in the brewing industry—I know you’ve noticed the word “ale” is missing from the name of my latest gift to the imbibing world. Is it a lager? No. Is it somehow not an ale? No. Is it something to concern one’s self with? No. Like the aforementioned hyphenate debate, such semantics shouldn’t be dwelled upon. Leave that for the also aforementioned, catastrophically hopeless members of the peanut gallery who’d do well to put down the peanuts and pick up something far more worthy of its own section in the public discourse and a much higher level of contemplation. You know, like Bourbon Barrel-Aged Arrogant Bastard. Disagree? Then venture someplace comfortable, perhaps nestle in amid the cold nameless (unless @poopymcgriddlesticks, @degeneratepanda or @rancid_anus is your true given name…which is even more tragic than somebody voluntarily going by that handle) hordes of chronic online malcontents littering the Internet with their bitter and far-too-frequent social blatherings. This beer is not for you…and I mean that. It was forged for the Worthy, and if you have to ask, speculate, wonder or whine…you’re not worthy!

I bought a 6 pack of Bourbon Barrel aged Arrogant Bastard,and I don't taste any Bourbon like I have had on tap several times. Has anyone else noticed this?
Walt

Fo shizzle! I've been a fan of the Arrogant Bastard for at least 10 years. One day my wife brought home a sixer of the Bourbon Barrel-Aged Arrogant Bastard. The only thing I could say after trying it was, "You only bought one?!?!"

If anyone can please tell me where to get some more, please, please, let me know!