A Rundown of our Beer

You might have heard we released 120 beers last year. Within that 120 were our core beers, dated editions of Stone Enjoy By IPA, collaborations, Liberty Station beers, Stochasticity Project experiments and a multitude of others. Even we had trouble keeping up with this onslaught of ales, so confusion among our fans is understandable. But there’s always a rhyme and reason to our madness. With multiple naming conventions (and design conventions failing that), our releases all have their rightful place in our family of beers. Below, we’ll break it down for you, bottle by bottle, and demystify our portfolio. 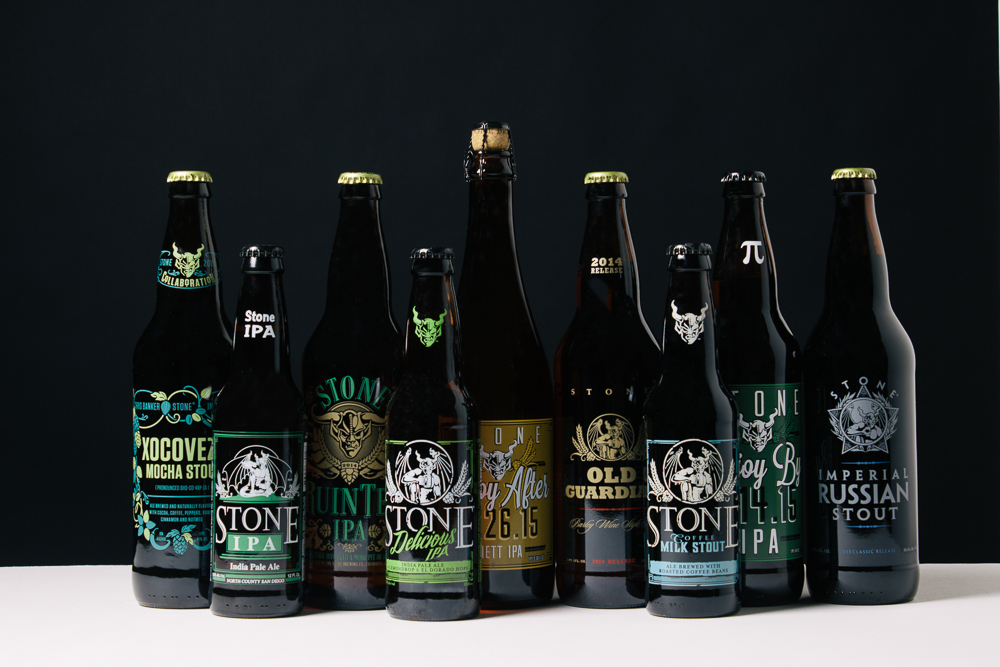 Core beers are our tried and true, year-round stock. You’ve probably seen these beers a hundred times…and picked up a hundred more because you know how good they are. Hopefully this didn’t need any clearing up, but, hey, we have to start somewhere. This includes annual special releases like Stone Imperial Russian Stout, Stone RuinTen IPA, Stone Old Guardian Barley Wine and our anniversary beers. Core Beers 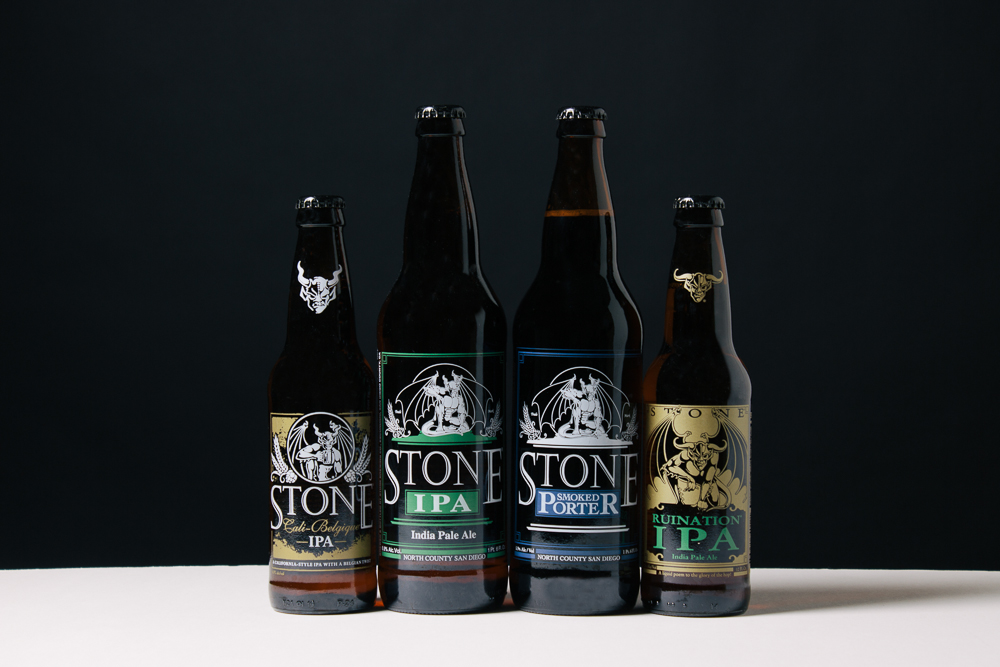 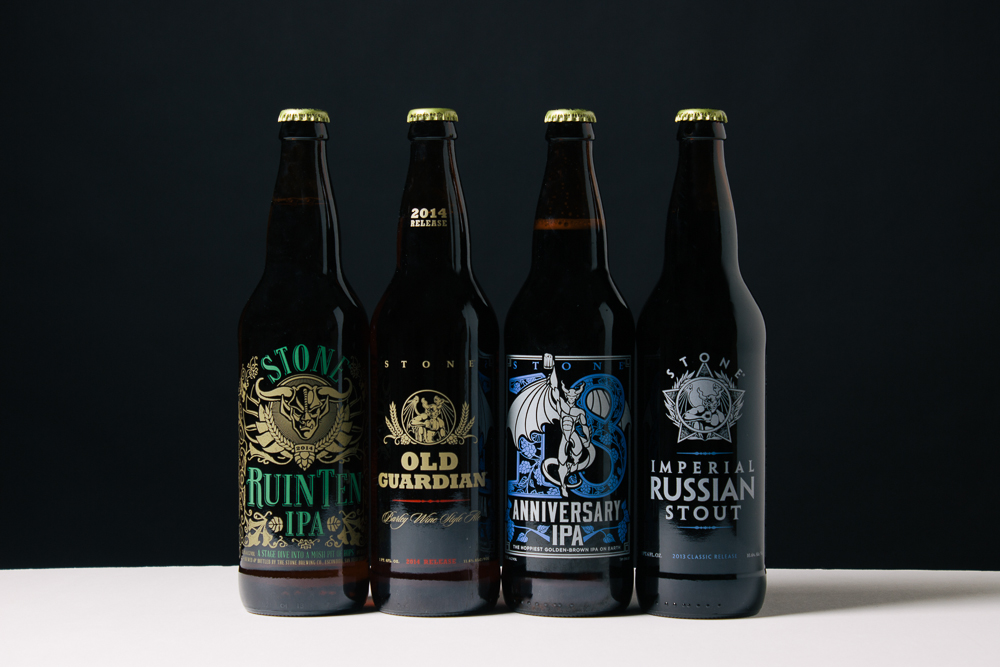 Our annual releases also include Stone Enjoy By IPA, which is probably the next most recognized beer we sprinkle throughout the year. With an almost cult-like following, its green label has inspired many a fevered review. It’s released several times throughout the year, along with its recently debuted cellarable counterpart, Stone Enjoy After Brett IPA. 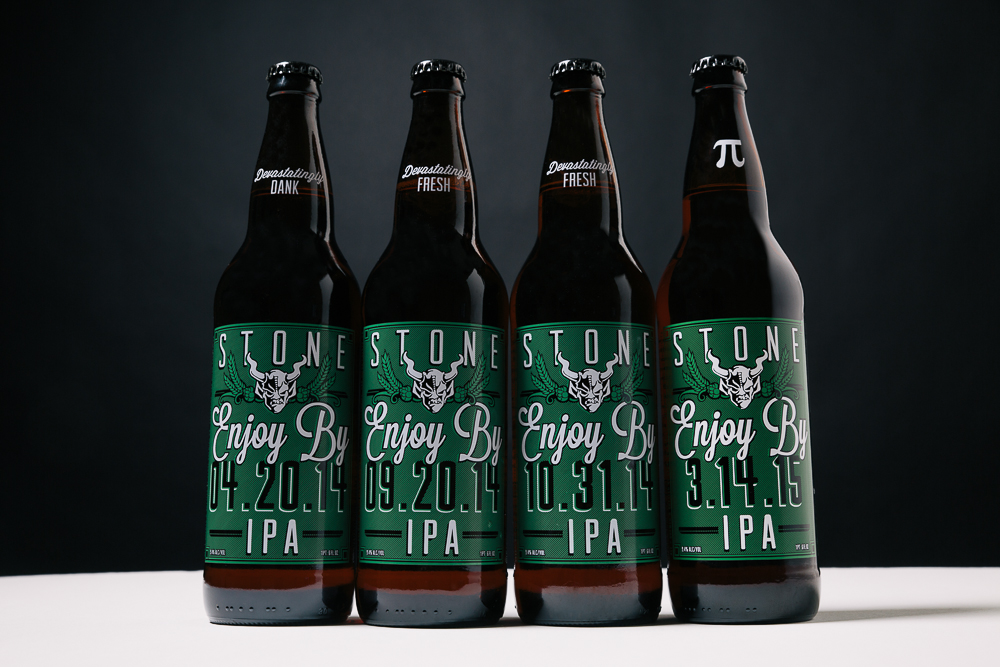 Stone Collaborations are especially fun to brew since we get to pull our friends in the brewing industry into the brewhouse and experiment. With three names on the bottle linked together with hop bines, they really stand out. Folded into each year’s quartet of one-time-only Stone Collaborations is the winning beer from our annual Stone Homebrew Competition & AHA Rally, to throw some love back to the homebrew community! 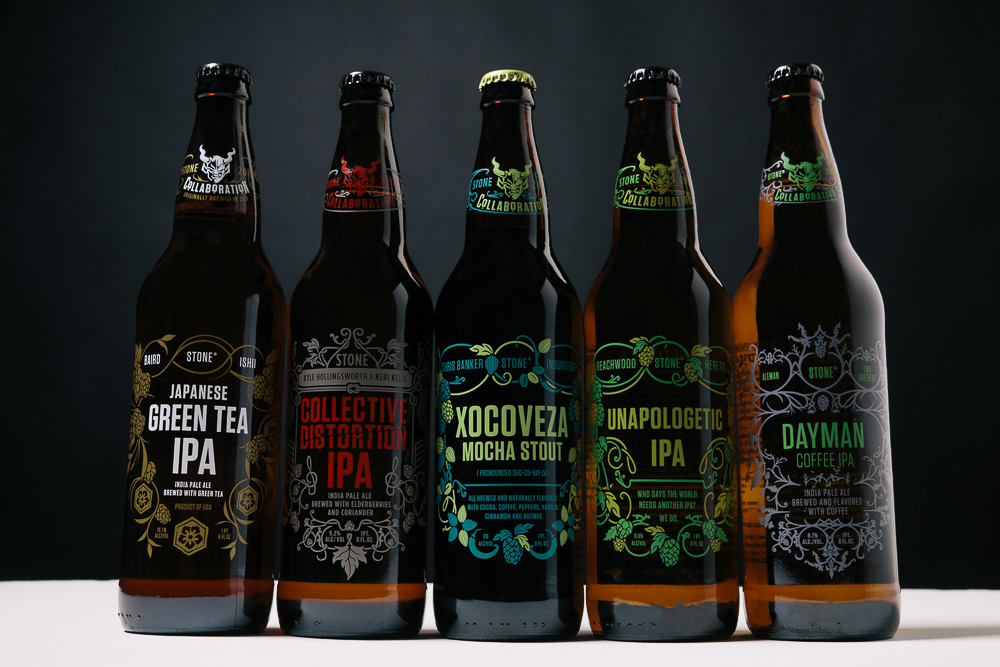 Our rotational beers usually come in six-packs and currently include three beers: Stone Saison,Stone Coffee Milk Stout and Stone Delicious IPA. Each of them available for a limited time every year. 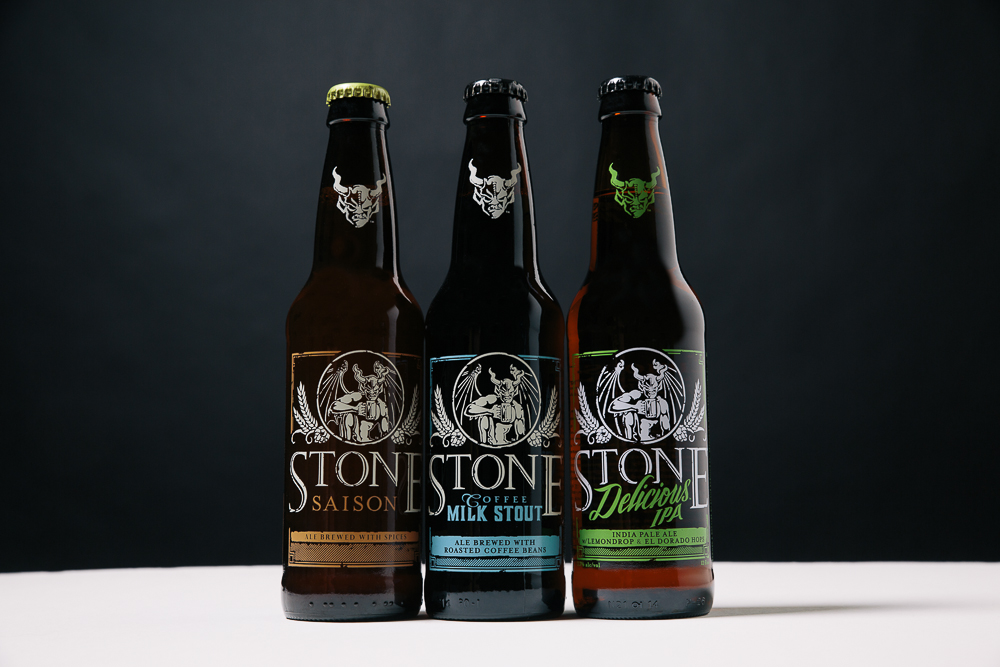 With their unpredictable grid layout Stochasticity Project beers delve deeper into the science behind suds. From odd ingredients to sight-defying styles, it’s hard to know what will come next out of this project. (Even we don’t know.) 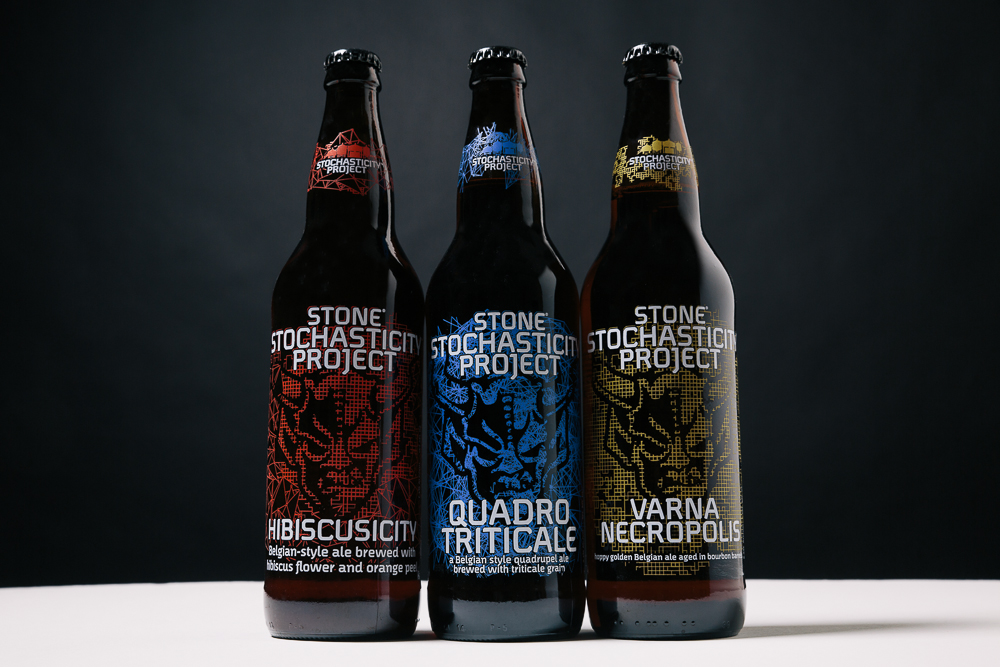 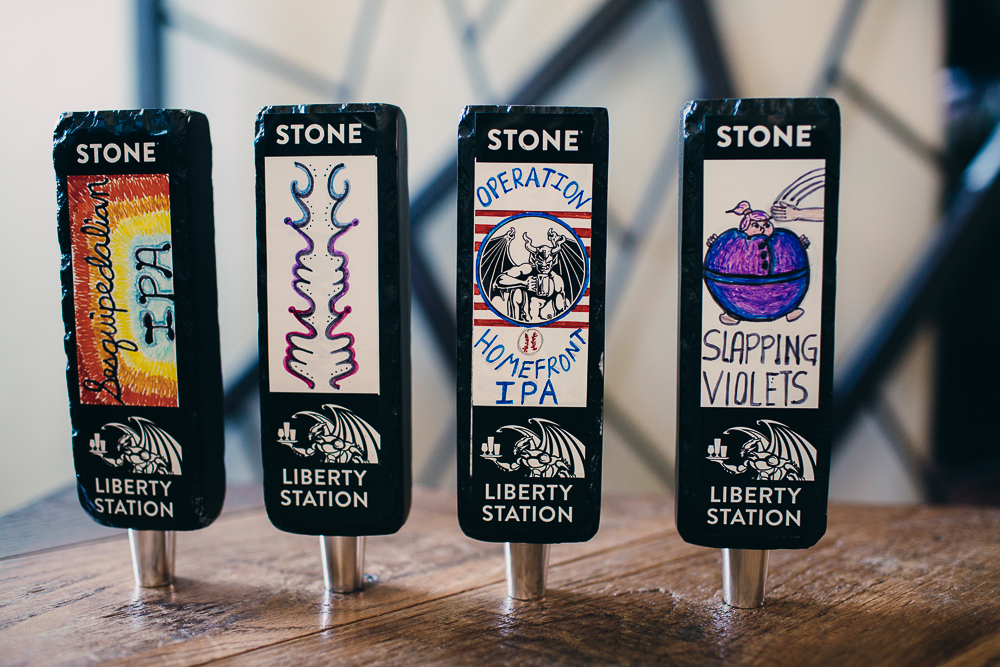 The Quingenti Mililitre Series represent our foray into barrel-aging in all of its oaky, spirit-enriched goodness. These barrel-aged editions of existing Stone beers have a smaller distribution than other experimental beers and always come in 500-milliliter bottles (Quingenti Mililitre does mean 500 mL after all) decorated in stylish in ebony and gold. 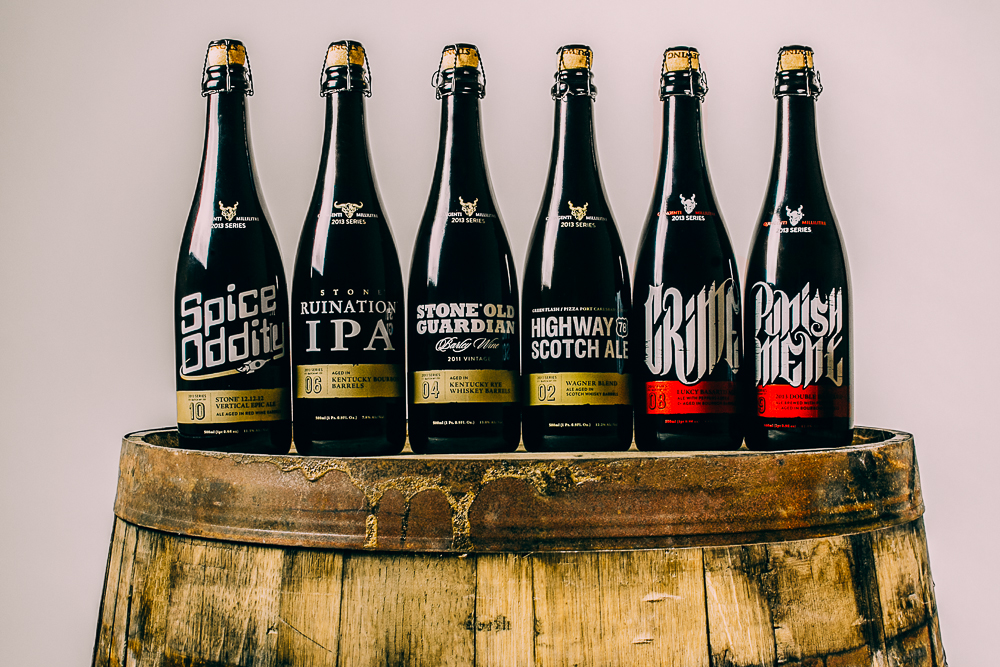 As with everything that has “set” rules, the word except is surprisingly prevalent (I’m looking at you, French language). This is our except section with its one-offs, just-because and festival beers. If you see a beer from us not listed above (or below), it belongs here. This includes Odd Year Beer like Stone Old Guardian Barley Wine – Extra Hoppy (which comes out on, you guessed it, odd years), Stone Spotlight Series brewing competition entries (and winners), Stone Mix Tape Ales, fundraising beers or, more recently, our gratitude presented in fermented form. 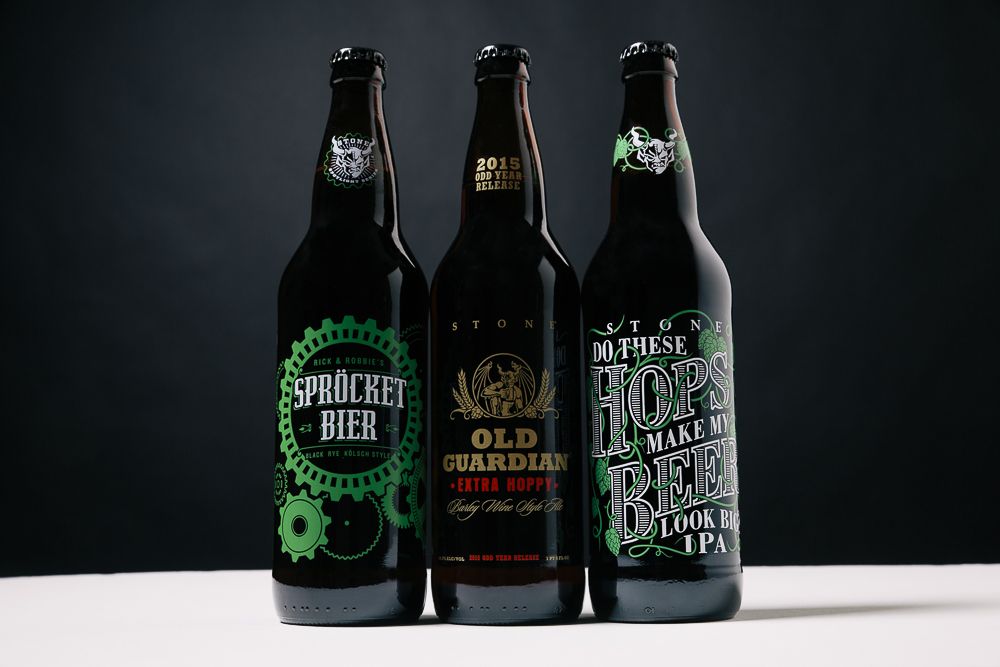 And there you have it. A handy road map to (most of) the beers we create during the year. Of course, we don’t always follow this form. Labels may change, brands might be expanded and one-time beers may come back to life, but whichever bottle you choose to pick up, annual or one-off, it’s got our name and commitment to quality written all over it!

Do you truly feel threatened by Sawstone Brewery? I have say your beers were many of my goto beers to buy but after this I can say I doubt I will buy your beers ever again. I did the same when Magic Hat sued West Sixth brewery for the font they used. They lost and I quit drinking Magic Hat beer. It's just sad that the big dogs always try to push the little guy around.