Stone and homebrewers go way back. We’ve been hosting the monthly meetings of the local homebrew club, The Society of Barley Engineers, since 1996—back before we even had any tanks in our original building in San Marcos. To this day they still meet the first Wednesday of every month upstairs in the Bistro (the Barley Literates also meet in our Bistro). We’ve also offered up many of our recipes for homebrewers to attempt their own versions of our beers, including our Vertical Epic Challenge, which challenges homebrewers to brew clones of our various Stone Vertical Epic Ales. Steve Wagner, our Co-founder and Brewmaster, even got his start as a homebrewer: Needless to say, we understand the importance of the homebrewing community. That’s why we’ve hosted an American Homebrewers Association Membership Rally every year since we opened the Bistro. Aside from bolstering the ranks of the AHA, these rallies provide a casual forum for homebrewers to share each other’s creations, chat with professional brewers, and bond with other homebrewers. Our rallies keep getting bigger and better every year. 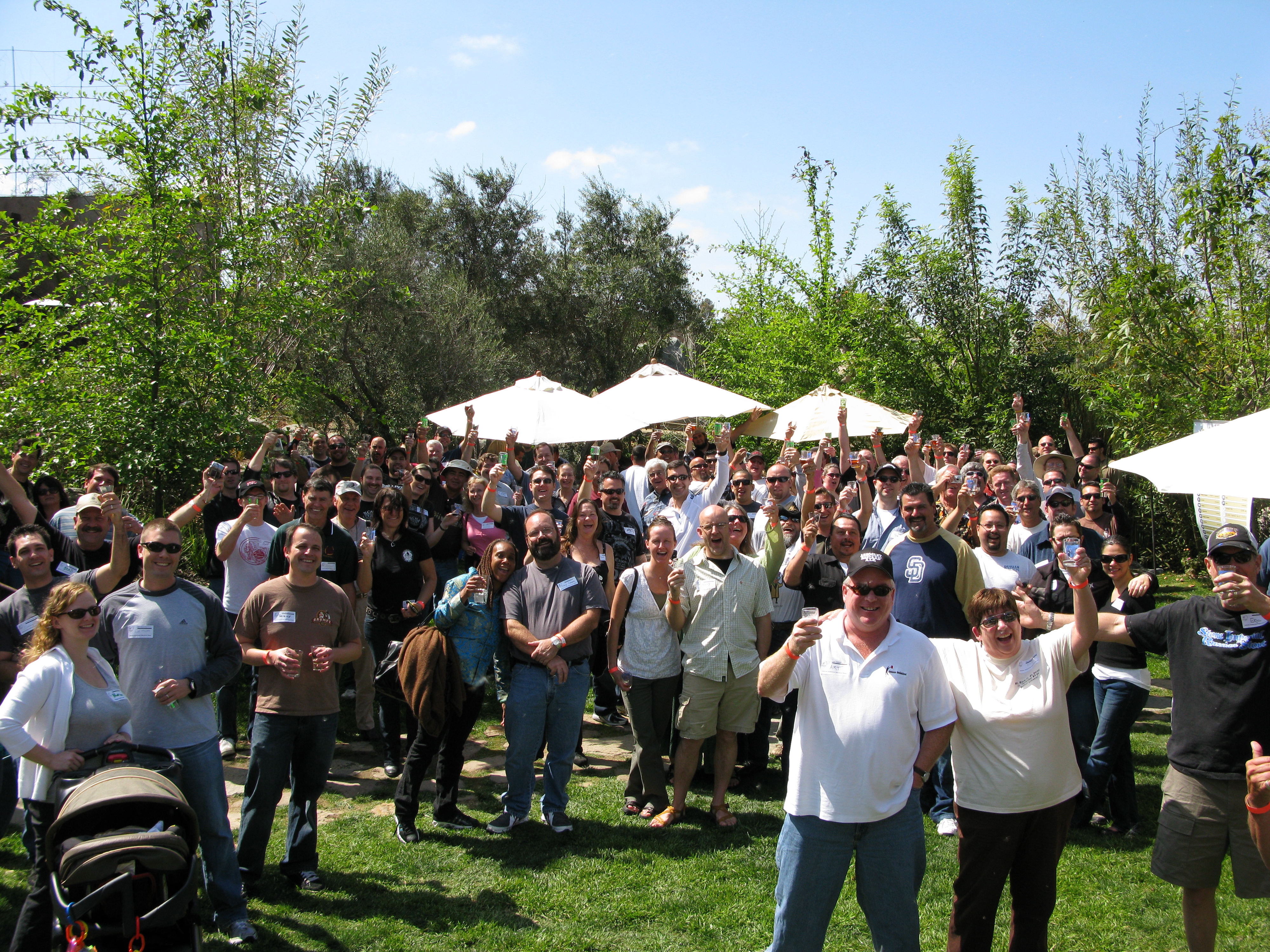 When it came time to plan this year’s AHA Membership Rally, we decided to up the ante on our homebrewing competition. This time the winning brew would be brewed on our system to be served here at Stone. With the strength of our local homebrew scene, we knew the response would be phenomenal—and it was. Members of So. Cal. homebrew clubs delivered twenty-three incredibly tasty brews, along with four outstanding brews submitted by individual homebrewers.

We were quite pleased by the strong showing of enthusiastic homebrewers. According to AHA Director, Gary Glass, this was the biggest AHA Rally EVER in terms of RSVP’s and new members. That’s a stat to be proud of, and with the help of local homebrewers we’ll top that next year. Homebrewers came from near and far to take part in the blind tasting and cast their vote for their favorite. Many drove several hours from neighboring counties to participate, but long time Stone fans Roberto and Jade Saldivar had them beat. They trekked all the way from Dublin, CA, (near San Francisco), where they are part of a homebrew club called Mad Zymurgists. Roberto and Jade displayed true dedication by making the long trip down to one of their “favorite places in the world” just to attend the rally. Noticing my age, they jokingly added “We’ve been Stone fans since way before you were here.” As the polls closed, four beers emerged as fan favorites. Many attendees were impressed by Eric Holden’s The Event Horizon, an innovative Vanilla and Peppercorn Imperial Russian Stout, as well as Jeremy Jerome’s Admiral Nelson—a tasty Rye IPA. Attendees also delighted in Brad Sayles’s Kalifornien Kolsch, a refreshing take on a Kolsch beer, and Ken Schmidt’s fantastic Aloha Plenty Porter with Kona Coffee, toasted coconut and macadamia nuts. After tallying all the votes, it turned out these were the top four beers. Once the final four were determined, an all-star Stone tasting panel began the difficult task of judging the winner of Stone’s March Madness Competition. The panel consisted of Stone CEO Greg Koch, Head Brewer Mitch Steele, Beverage Coordinator “Dr.” Bill Sysak, Brewer Jeremy Moynier, Web Programmer (and member of Quaff) Bill Sobieski, Packaging Supervisor Kris Ketcham, Art Director Mike Palmer, and Marketing Director Chris Cochran. All four beers were expertly crafted, but only one could prevail. After several minutes of tense deliberation, Ken Schmidt’s Aloha Plenty surfaced as the clear winner. Mitch Steele announced the four finalists, and then presented Ken Schmidt as the winner. Ken was psyched to claim the grand prize. “I had been thinking about the recipe for six years, said Ken, "but it was Garrett’s (Garrett Marrero of Maui Brewing Co.) Coconut Porter that inspired me to go ahead with it. I wanted to brew something that infuses all of the elements of the islands and captures their essence.” 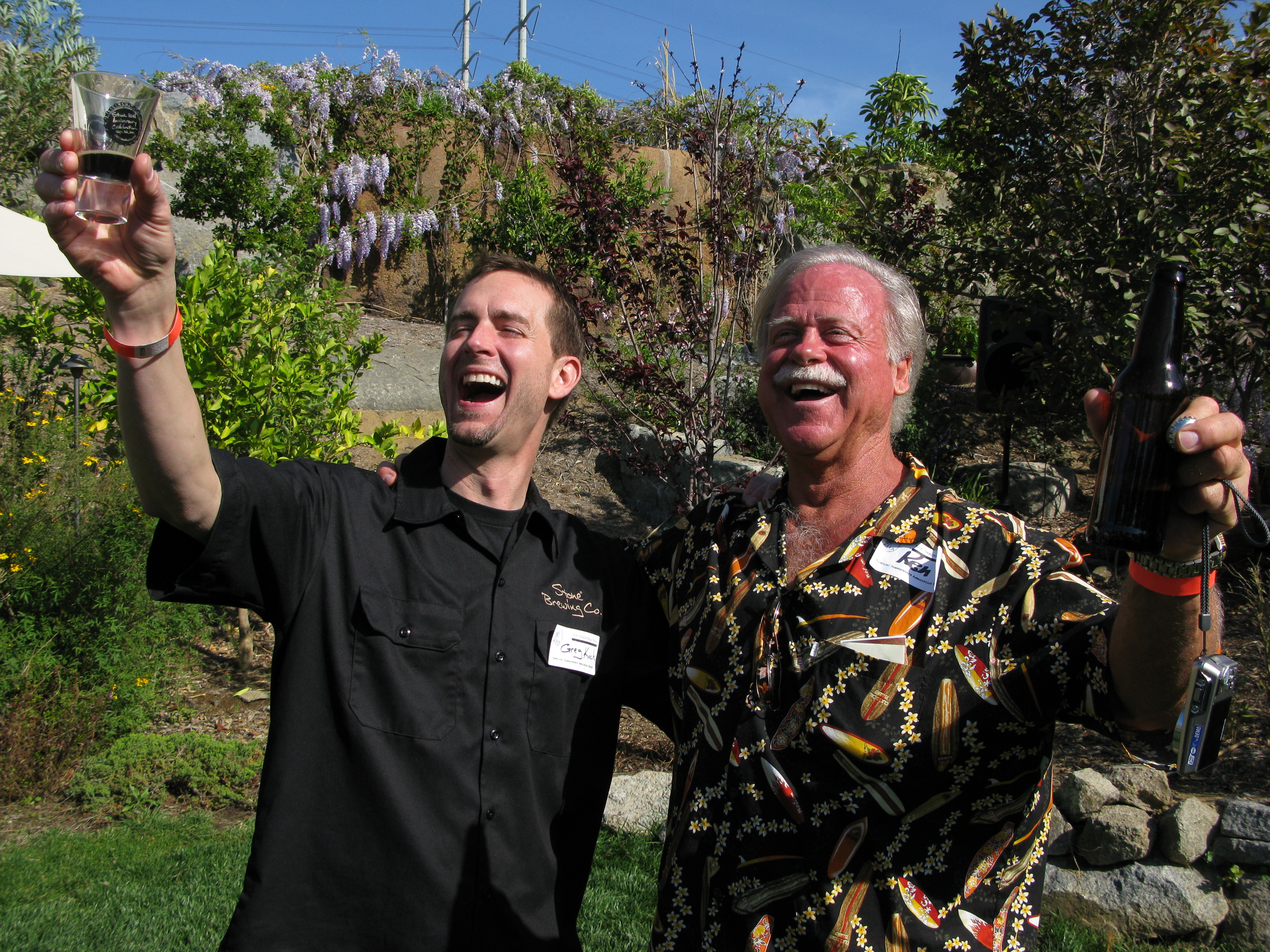 Mitch Steele was impressed with Ken’s Aloha Plenty, calling it “a phenomenal beer.” He’s looking forward to brewing it with Ken (and possibly Garret) here at Stone. “We’ll have to figure out how to toast a lot of coconut and get our hands on a lot of macadamia nuts,” he said, “but I think it’s going to be great.” As promised, Ken will have the chance to brew his Aloha Plenty on our system to be served here, so watch out for it on tap in the Bistro. Also, because the brew had previously won a Beer Judge Certificate Program sanctioned homebrew competition, we’re submitting it to compete in the Pro-Am Competition at the GABF. To top it off, Greg Koch hinted at a possible three-way collaboration with Ken, Garrett Marrero from Maui Brewing Co. and Mitch Steele. Ken was all smiles, admitting that “it will be so cool to brew on Stone’s system.” 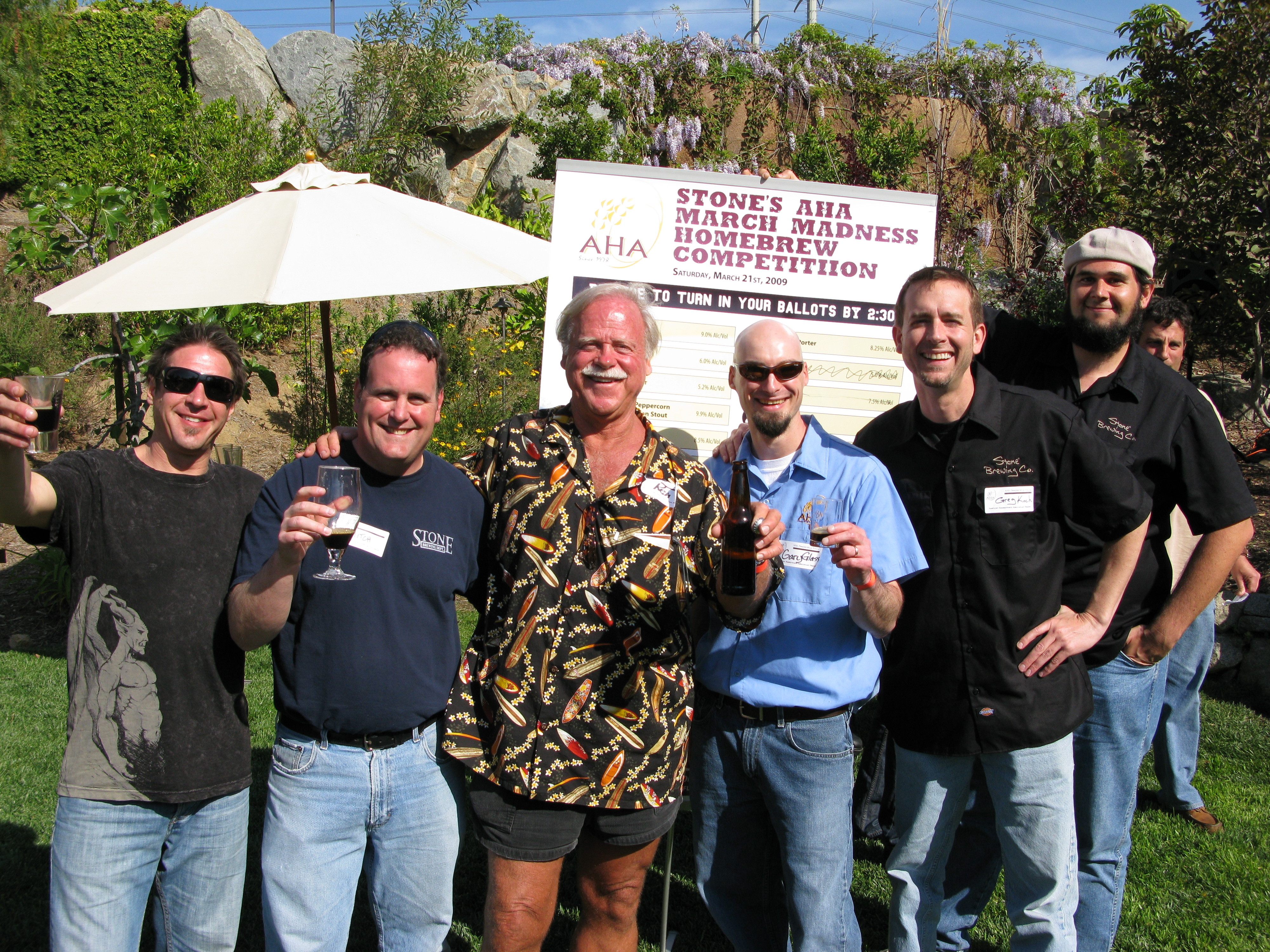 We were blown away by the quality of all the submissions. Our local homebrewers are arguably some of the best in the nation, and they once again proved that they’re capable of producing amazing beers. We can’t wait for next year’s AHA Rally, but in the meantime, head over to the AHA website to become a member and join some of the most prestigious homebrewers in the nation. Cheers to Ken for a job well done, and congrats to the runners-up. All the beers were phenomenal, but if you didn’t get a chance to taste Ken’s Aloha Plenty at the rally, you missed out. You don’t want to miss it again, so stay tuned for the upcoming collaboration, and get ready to taste “the essence of the islands.” Check out the AHA Rally flickr set -Matt Steele
Category:
Events
TAGS:
AHA, aha members, AHA Membership Rally, aloha plenty, aloha plenty porter, american homebrewing association, chris cochran, gary glass, Greg Koch, home brewing, homebrewers, homebrewing, jeremy moynier, ken schmidt, kona coffee, kris ketcham, macadamia nuts, matt steele, Mike Palmer, Mitch Steele, steve wagner, Stone Brewing, Stone Brewing World Bistro & Gardens, Stone's AHA MArch Madness, toasted coconut

That's awesome! Great weekend for everyone...Congrats to the winner.

So when is Aloha Plenty actually gonna be served at the Escondido facility? I'm a big fan of Ken Schmidt's forward thinking and have had the pleasure of picking his brain many mornings at the gym. Will there be any limited edition Aloha Plenty T-shirts? I'm seeing a gargoyle in a grass skirt with a lei...

Great article and informative. I have bookmarked this . Thanks.