Thought you might like to learn about the results of the recent epic “Beer vs. Wine Dinner” at the Rancho Bernardo Inn’s highly regarded “El Bizcocho” restaurant. First, a short recap of what the dinner was all about….

OK, so without further ado, I’ll now reveal the results: BEER! Yes, beer won the night. This time, it was so close that they had to recount…twice. Turned out WAY too close for comfort for me, but ultimately it was indeed Beer that won…and just by ONE vote. This is a big deal. The premise of the dinner--the motivation for me to do it--was to prove a point. I intentionally picked a wine-centric fine dining chef-driven restaurant for the Beer vs. Wine Dinner. I wanted to show that even in this "hostile territory" the ability of great craft beer to pair amazingly with great food was equal, or better, to that of fine wine. And we succeeded. We ALL succeeded.  This includes YOU because we are all a very important part of the craft brewing movement and we are collectively showing the world how wonderful and amazing the world of great craft beer can be. I’d like to give special thanks to our Head Brewer, Mitch Steele, as he helped pick the selections with me for the beer pairings for each of the dinners. You can view the grueling tasting and selection process in these two "Greg's vBlog" clips (you'll see that we should get a Medal of Valor or something for our willingness to self-sacrifice for the betterment of craft beer):

This year, we were further aided by the Stone Brewing World Bistro & Gardens' Beverage Coordinator, Dr. Bill, and his educated and insightful palate in the decision making process. Ultimately, we succeeded in our mission. We demonstrated that craft beer is to be reckoned with in the culinary world. You and I already knew that, and now even more people will have the opportunity to know it!

Here’s a picture that was shot just moments after the results were announced and I was given the trophy. Standing next to me is Barry Wiss of Trinchero Family Estates, the Napa-based Sommelier challenger who flew down for the event: 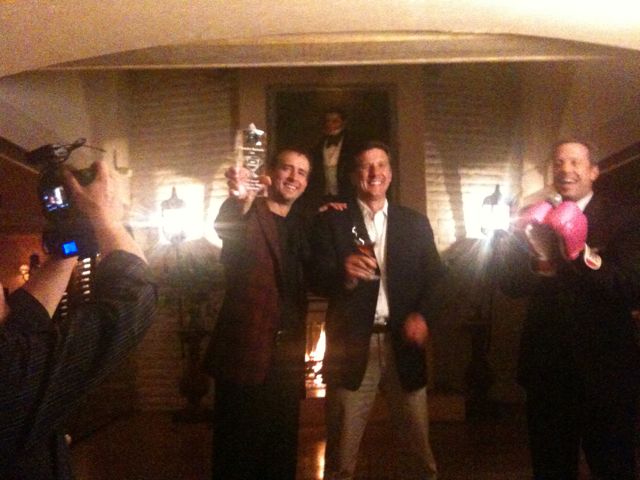 All in all we all had a terrific time.  I gotta hand it to the wine guys, they were consummate good sports.  Barry didn't skip a beat in offering a genuine "Congrats!" when the voting results were announced, and even went on to tell me that the Beer vs. Wine dinners had really opened his eyes to the depth and complexity in the world of great beer.  Barry's compatriot at Trinchero, Chris Siconolfi, emailed me the next day writing "Thank you for the competition and the partnership last night, it is like we all agreed, at the end of the day it is about opening the consumers' eyes and educating on the fact that beer and wine pair amazingly well with food." I couldn't have said it better myself! Stay tuned as the Beer vs. Wine saga WILL continue.  Barry and Chris have invited me to conduct a soon-to-be-scheduled Beer vs. Wine Dinner in the heart of Napa wine country.  I can't wait.  And I'm gonna go in swinging.

Hey, just 'cause we're all friendly and everything, and we are, doesn't mean I'm going to pull any punches.  When I go, I'll go to win! 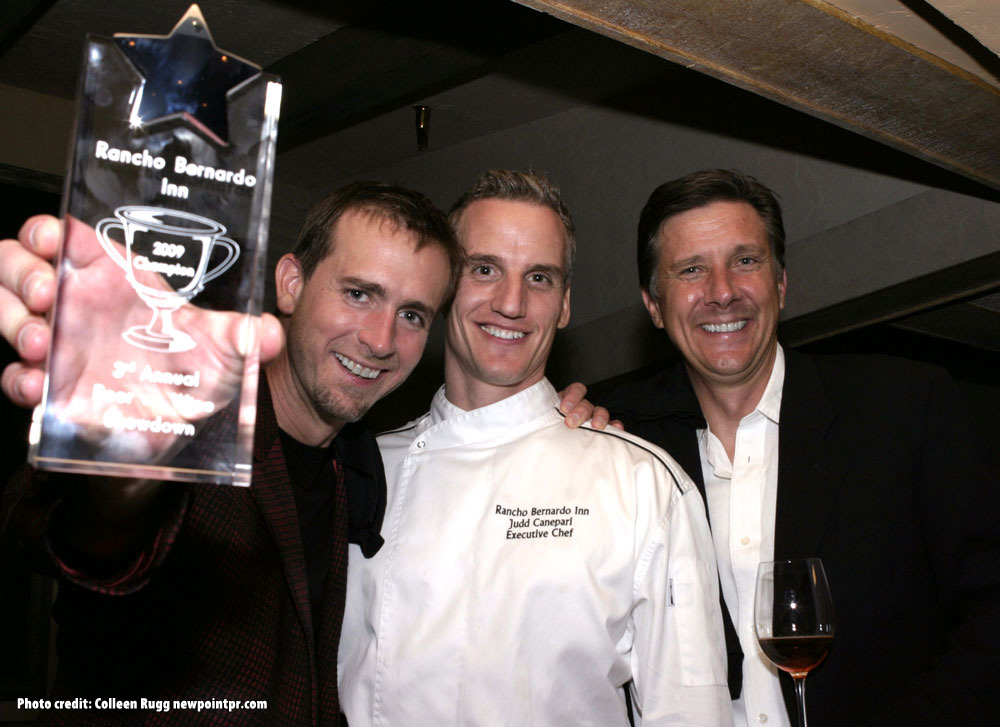 So where's the video footage from the 2009 showdown?

Greg - Awesome Idea and congratulations on the win.

Can you post the food menu and associated wine/beer pairings? It would also be interesting to hear why you chose the beers that you did.

In about three weeks we'll get both Lost Abbey Inferno Ale and Judgement Day to Sweden. And of course, two weeks later we'll get treated by some wonderful Stone! Yay!

Looks like 13th Anniversary and VE 09.09.09, but I heard something about another batch of Double Bastard as well. Hope the rumors are correct!

Another evening where there couldn't be any real losers. Great food, a selection of fine wines and craft beers, in one of the best restaurants in San Diego county.

That said, congratulations on the win. One vote, a narrow victory indeed.

Wasn't Gavin on The Next Iron Chef season 1?

what was the menu? what beer did you serve? DETAILS MAN!

Cliff and Danny,
You guys can see the menu here: http://www.stonebrew.com/news/091021pr/menu.jpg