John Egan Brews His Own Fuel Too

Remember last summer when gas prices were ridiculously inflated? Remember wiping away the tears while your hard-earned cash ticked away at the pump faster than our national debt? John Egan doesn’t. While the rest of us were subject to the tyranny of fossil fuels, John avoided gas stations entirely, comfortably enjoying his wallet-friendly biofuel solution. When John isn’t supervising our brewing team, managing our cask and barrel aging program, and watching over our prized special creation beers (like Stone Smoked Porter with Vanilla Beans), he’s indulging in his green side by converting 100% of our Bistro’s waste oil into biodiesel fuel to power his truck. So how does he do it?

Every other week, John uses an electric pump powered by his truck battery to extract waste oil from a 50-gallon drum behind our Bistro. Once the oil is filled back into the containers it first came in, he takes it home, processes it in the custom-built system in his garage, dumps it in the tank of his truck, and voila!

So what does biodiesel have to do with beer? Well, according to John, being a brewer comes in handy. “There are a tremendous amount of parallels between biodiesel and brewing,” said John. “You take raw materials and turn them into something else, and quality is extremely important. Much of the same equipment is used such as pumps, hoses, valves, tanks, filters, etc.  Actually, used brewing equipment would work exceptionally well to make biodiesel with.”

While John genuinely enjoys “taking waste materials and turning them into something of value,” he admits that brewing biodiesel isn’t a walk in the park. “It’s quite involved and takes effort,” said John. “It’s not one of those things that you try out, and then decide to scrap after a few months.” 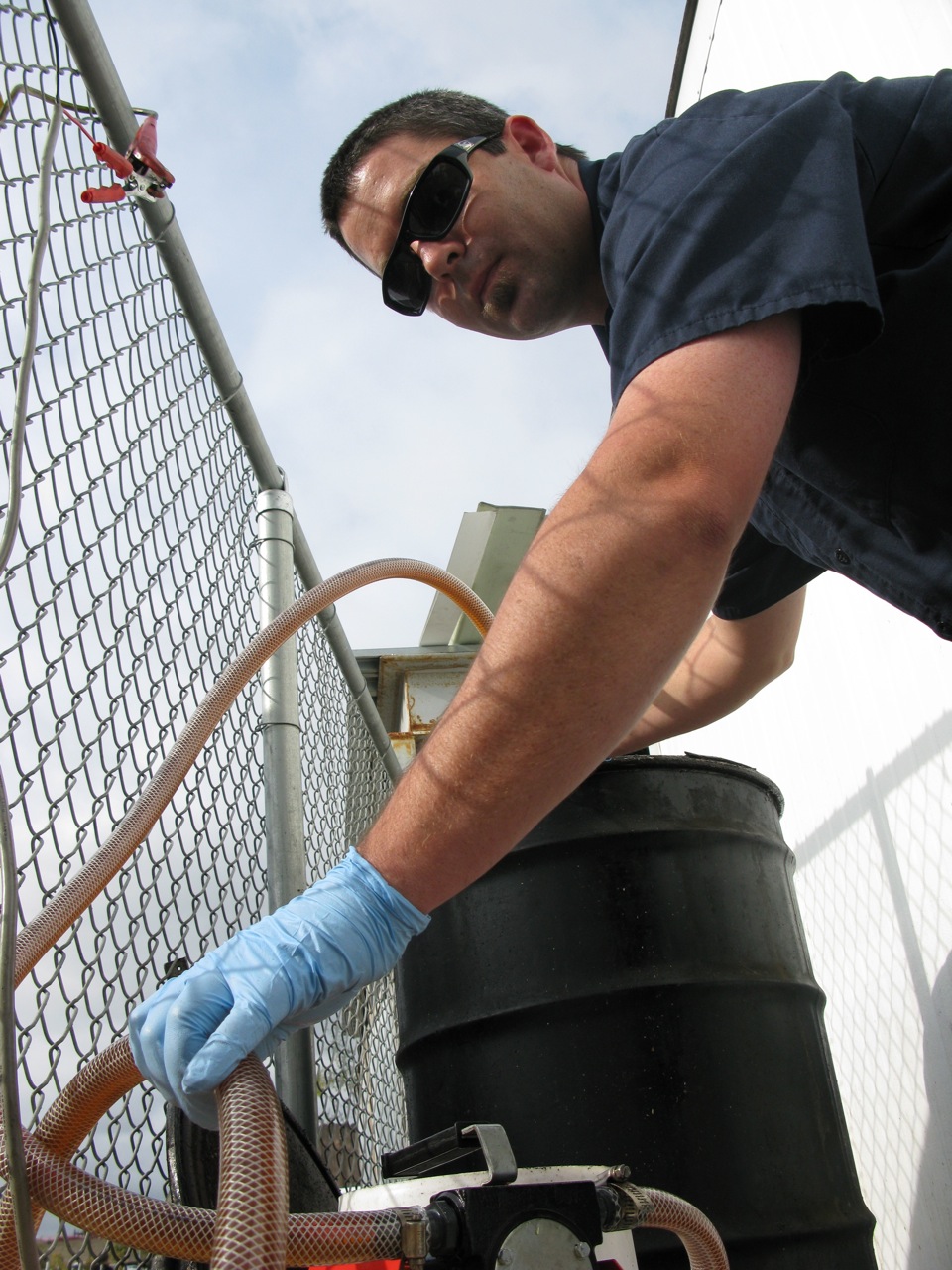 John extracting the oil from the 50 gallon drum behind our Bistro. Before our Bistro opened in November 2006, John acquired waste oil by other means, including reclaiming the oil used to make the Arrogant Bastard Ale Onion Rings at our Anniversary parties.

Sure, brewing biodiesel isn’t easy, but it is easy on the wallet. After processing, one gallon of biofuel comes out to about $1. Aside from being outrageously cheap, biodiesel also runs a lot cleaner than regular diesel, and emits a pleasing french fry smell as an added bonus. It can be slightly less efficient than regular diesel, though still more efficient than regular gasoline. John is obviously a fan of the environment, but he’s also realistic. He feels that biofuels are “an important part of our energy matrix as a supplement, but they aren’t the solution to our energy problems.” Sure, biofuel may not be the magical panacea for our energy woes, but it definitely helps. John put it best when he said “it feels very good to reuse things that would otherwise find their way into a landfill.” That’s something I think we can all agree on. -Matt Steele Check out the press release we wrote about our Delivery Truck Fleet running on biodiesel.
Category:
Miscellany
TAGS:
beer, biodiesel, biofuel, biofueling, brewer, brewery, converting oil, craft beer, environmentally friendly, green, john egan, lead brewer, matt steele, recycle, reuse, stone beer, Stone Brewing, Sustainable, waste oil

Wow, that guy is amazing.

I had a chance to meet John on my last trip to Escondido.
I'm not surprised that he is not just a brewer of great beer, but is also helping the environment by brewing his own biodiesel fuel. John I enjoyed talking with you and am pleased to see you get some recognition. Keep up the good works.

Just wondering if John Egan is the John Egan that is Mike Egan's son?

i hope that we would be able to mass produce Biodiesel in the near future and i also hope that it would get cheaper."'

Lol I actually met the CEO of Stone several years ago at an event he spoke at on the SDSU campus. He was a great guy and had a lot to talk about.