Announcing the Most Bitter Bars of 2011

From June 4th-11th, one hundred and ten lupulin-crazed bars competed in our “Most Bitter Bar Challenge.” The premise was simple: the bar that pours the most of Stone’s hop-focused beers wins the undying glory of being named "Most Bitter Bar" for a period of one year. And now, after counting each drop, we’re ready to announce all of the winners. 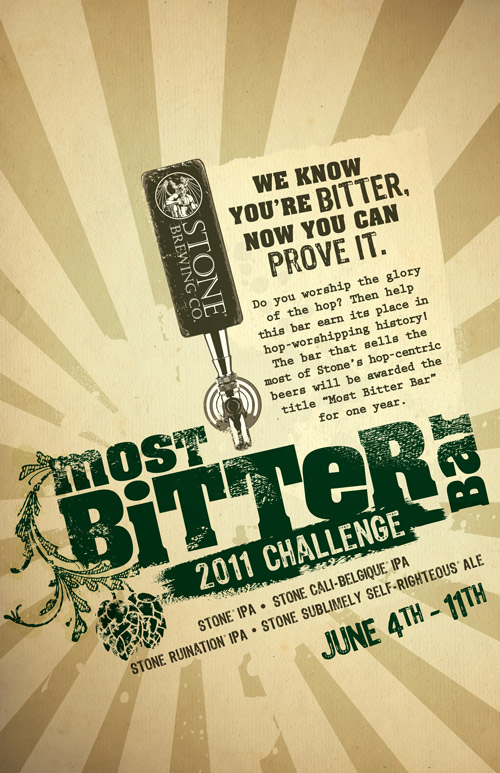 The Petrol Station in Houston is the national winner and is thus deservedly named America’s Most Bitter Bar! Congratulations Petrol Station, your patrons have demonstrated a ceaseless thirst for bitter beer and tremendous loyalty to your bar. A victory well earned! Naturally, we’ll toast you with an extremely bitter beer. Drilling down from there, we decided to name winners for each state and major region as well. So for the rest of country, here is the list of winners by state and region: State Connecticut: Eli Cannon’s Tap Room (Middletown, CT) Illinois: The Blind Pig Co. (Champaign, IL) Florida: World of Beer – Viera (Melbourne, FL) Kentucky: Pazzo’s Pizza Pub (Lexington, KY) Louisiana: The Avenue Pub (New Orleans, LA) Minnesota: The Happy Gnome (St. Paul, MN) Missouri: Flying Saucer (Kansas City, MO) New Jersey: The Pour House (Westmont, NJ) New York: Rattle N Hum (New York, NY) North Carolina: Hannah’s Haus (Beaufort, NC) Ohio: Boston’s Bistro & Pub (Dayton, OH) Oregon: North 45 Pub (Portland, OR) South Carolina: Closed for Business (Charleston, SC) Washington: Super Deli Mart (Seattle, WA) Regional Chicago: Fountainhead (Chicago, IL) Columbus: Bob’s Bar (Columbus, OH) Dallas/Ft. Worth: Flying Saucer – Lake (Garland, TX) St. Louis: International Tap House (St. Louis, MO) Upstate NY: Cole’s Restaurant & Bar (Buffalo, NY) Tampa: Datz Deli (Tampa, FL) A hearty congrats to all the winners! Your perseverance and dedication to serving tremendous quantities of Stone IPA, Stone Ruination IPA, Stone Cali-Belgique IPA, and Stone Sublimely Self-Righteous Ale is astounding. We were truly impressed and humbled (!) by the amazing effort put forth by all of the participating bars. We raise our glasses to you all. Please note that we are prohibited by California and Michigan state laws from announcing the winners in those states (protects puppies, we think.) In order to find out the winners in those states, please visit all of the participating bars and search their walls for a plaque. And keep your eyes open for our “2011 Most Arrogant Bar Challenge”, which will kick off around the time Double Bastard Ale is released in mid-October.

i absolutely love the stone IPA....one of the most refreshing IPAs i've tasted and certainly one of my favorites. How do i know what bars are participating in this contest and how is the winner determined? By what method is score kept between competing establishments?

What, no Falling Rock Tap House? Was Denver even in it? I am very surprised...

Oh, there it is! haha

Go Petrol! I'm proud and happy to say I had a little something to do with their victory.

Happy to have done my part in helping Petrol Station win this year! Congratulation!

RUINATION: one of the best beers i have ever had....by far the best beer ever....keep up the god work and ill keep drinkin good beer....also love the arrogant bastard ale simply awesome

The first time I had Stone's Sublimely Self-Righteous IPA was in NYC at Rattle N' Hum- cask-conditioned. Thank you Stone for changing my life!