As you may have heard, we’ve got some big plans on the table (and in the ground.) The reason you may have heard this is that we had a special press day on Wednesday, in which we invited a group of journalists to join us on a tour of our ever-expanding operations.

Now that our friends in the media have had a chance to feast on the news, we’re proud to announce this to you, our loyal blog readers, ourselves. Here’s what we’re working on (in chronological order of when you’ll be able to enjoy them):

1) Stone Farms is 18-acres of beautiful farmland and oak-covered hills located just 8 miles north of our brewery in Escondido. After the previous operators of this local farm were forced to shutter, Stone stepped in to revive the farm. Under the experienced guidance of Mil Krecu, a founding member of the Tierra Miguel Foundation, Stone Farms is already providing an array of unique produce to the Stone Brewing World Bistro & Gardens (which, by the way, is San Diego County’s largest restaurant purchaser of local, small farm organic produce) under biodynamic farming principles. We’re planning to expand the farm to include event/educational space and more as time goes on. 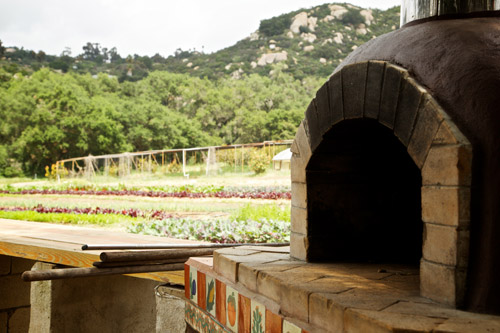 The wood-fired oven at Stone Farms

2) The Stone Company Store—South Park will include (up to) a 14 tap growler & tasting station in the heart of one of San Diego’s core neighborhoods. It will also feature over 1,100 square feet of retail space filled with luxurious Stone merchandise (if you, like us, consider fine Stone glassware & wearables to be ‘luxurious’). This spot will give San Diegans the ability to refill their growlers with fresh Stone beer at a convenient, eco-friendly location in much closer proximity to downtown than our Escondido brewery. 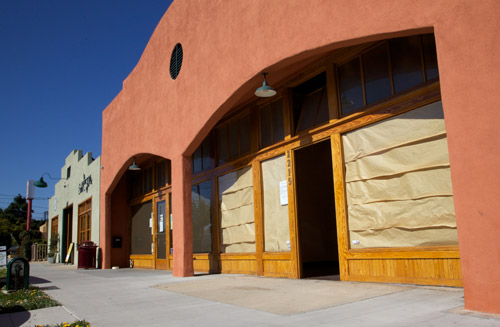 The storefront in South Park 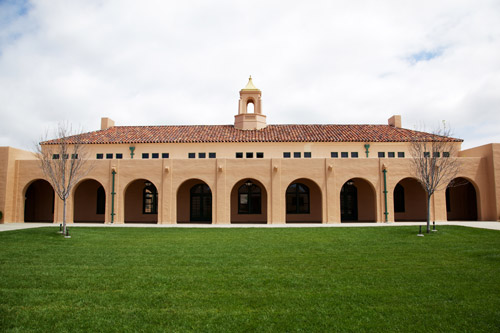 4) We’re expanding the brewery in Escondido. In January, we were able to purchase some adjacent lots, which will allow us to double the size of our brewery. We’ll use a new 55,000 square foot building for packaging and cellar space, which will allow us to eventually grow to a maximum of approximately 400-500,000 barrels per year (for reference, last year we brewed 115,000 barrels.) And with the other lots…

5) Just across the street from our brewery, we’ll be building a 40-50 room specialty hotel! To boot, the facility will be replete with space for large events, a special barrel-aging room (incorporated into the event space), and a catering kitchen. The Stone Brewing Co. / Stone Brewing World Bistro & Gardens is the 3rd largest tourist destination in North County San Diego & fans have been asking us for a place to stay since they starting visiting us. Sometime in 2013, we will be able to direct them to the most beer friendly hotel in the world, a perfect launching pad for a tour of America’s best beer city. Yeah, we’re pretty excited about this one.

Grand, eh? Yeah, well it comes with a grand price tag too: $26.6 million invested over the next several years. We expect this major investment in San Diego’s economy to create approximately 250 permanent jobs and a significant number of construction jobs to build it all.

So what does all this mean for Stone? It means that as we grow, our beer & food will be more accessible to people near and far. It means you’ll get to experience Stone in new ways. And hopefully, it means that we’ll have the opportunity to introduce even more people to the awesomeness that is the blossoming culture of craft beer.

From our perspective, Stone is not really changing. Just growing. Our commitment to sustainability, creating unique spaces, and brewing the best, most imaginative beer we can, is, if anything, deepening. These projects reflect our obsession with freshness, bold character, our love of innovation, and our unmitigated willingness to embrace ideas that may seem a bit nuts from the outside. Or even very, very nuts.

But that’s the way Stone does it, and it’s worked pretty damn well so far. We hope you’ll stick around to see how it all turns out.

Here's some of the coverage of our big announcements: 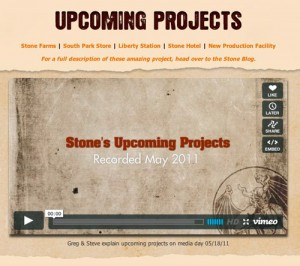 The Garden of Eden does exist!

I would LIVE at Stone if I could... It's a"Happy place" for me, so proud of a San Diego product that is now setting trends, responsible production and making waves worldwide.. Act locally, act globally think Universally!

Exciting news and definitely a great thing for the growth of the craft beer industry. I hope we also see even more amazing collaboration brews with the increased capacity!

Can't wait until my next Stone visit! The farm and barrel room are especially exciting.

I 'm excited Stone is making plans to come down to San Diego. I go up north regularly to the bistro to eat and drink my Sunday away. However I'll always make trips to see my favorite bartenders Liz and Leah!

Garden of Eden? Its heaven on earth, Nirvana, Valhalla, ok maybe a little over the top...cant wait to come stay across the street! I hate not being able to try everything I want because I am the DD. I will be a frequent visitor.

So are you guys also planning on running a multi-million dollar ad campaign to try and convince us that you're still small? :p

No matter how it manifests, there is nothing more exciting and exhilarating than witnessing excellence...except maybe excellence on the march. Congratulations Greg, Steve, Mitch and everyone in the Stone family!

Glad to see you expanding so the Escondido location won't be so crowded, however... what about perfecting the service and consistency of your food? Sometimes its great and other times it really misses the mark. Good luck to you!

When are you going to go public with your sustainability strategies? We are avid fans of your beer quality but the earth is our priority and your philosophy must match your quality for discerning fans. Tell us how drinking such a quality beer will help the future of our children.

As a small business owner I am constanly amazed and intrigued by not only your business model but your excellent product. It is not often that in the pursuit of excellence in ones company that a corporation improves a community, brings awareness to green business practices, creates jobs and an incredible beverage. You are truly putting Escondido on the map.I think your hotel will be amazingly successful. Good luck!

Wow I can't wait to try the Pumpkin Ale.

Hey guys... I live in South Park and I'm a video producer... and my hubby ( video editor/ director) home brews and we LOVE,LOVE the fact you guys are setting up shop in SP but am sad that this video does not play on my Mac. It is faded into white with hardly any video showing. Just a FYI. Love the Liberty Station deal too, since my family bikes around there - assuming it's as family friendly as Escondido. Love you... just letting you know that your video does not play well for others. You guys rock... just want you to be seen AND heard by all. Jules

You need to do weddings!

Fantastic! Stone farms looks like a great site. Will there be lodging there? I need a Transporter to beam me down there from Seattle area.

Hmm..this certainly is good news for the Stone brand, as this type of expansion can only serve to reinforce it's dominance of the craft industry in SoCal, but as a common consumer I'm left scratching my head a bit.

Now don't get me wrong, the news of a new store is great, as is the news of Stone farms, however, I must ask, a hotel? Whoa! What's next, an amusement park? A casino? Stone University? Well, that would actually be pretty cool. =)

But truly, congrats to all of the guys and gals who've worked so hard to make Stone what it is today. We only ask that you don't go too big on us all at once!

Hey guys,
Congrats on the success of your enterprise. When your hotel opens, will it have mini-fridges stocked with Arrogant Bastard in tiny bottles? 8^)

Sweet a store in South Park!

Any chance you will be expaning to Iowa soon?

First, please include a full menu in South Park...not just a filling station.

Secondly, when is libery station restaurant going to open?

Please don't embed videos so they autoplay, it's a mess when you open up a lot of blog tabs in your browser and hear talk from somewhere. Recognizing the voice made it faster to locate, but still.

Seriously, the autoplay of the video in this blog post is super annoying.

Will Stone ever go public so I can buy some stock?